Anything related to the midterms.

Trump might be in trouble with his own party after this. I sometimes cruise the reddit conservative post to get a feel outside my bubble. There's a lot of anti Trump messages and pro Desantes talk. Him winning so hard in Florida made a lot of people switch sides. I can't imagine Trump will take that lightly.

anyone want to place bets on how long before Boebert announces her new job at Fox News?

Or fail up?
VP or senate next election cycle...
Governor even maybe... 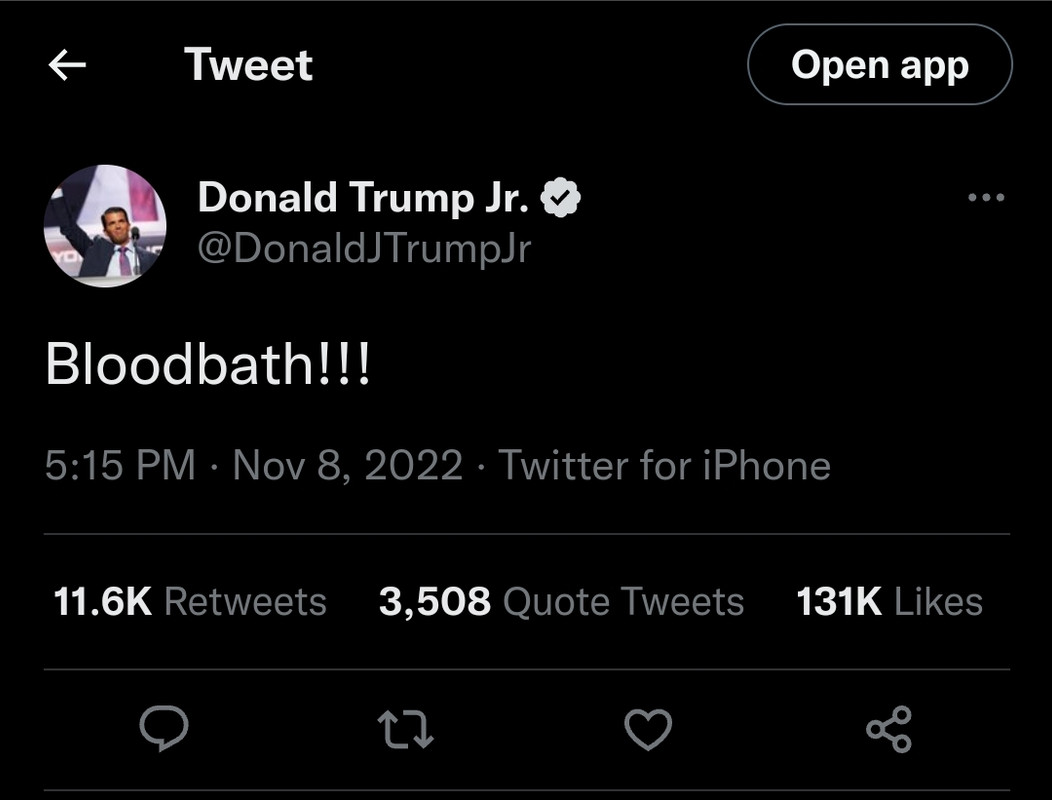 Funny how Elon's new algorithm kept promoting tweets like that one last night.

I was really concerned about the Oregon Governer race between a pretty standard Democrat and an election-denier MAGA Republican because polls were showing a toss-up when they didn’t have the Republican in the lead, but the Democrat managed to squeak out a victory with only a <30,000 vote lead. Way the f*ck too close for a state like Oregon.
A local billionaire (Phil Knight of Nike) openly funded both the Republican candidate and an independent spoiler candidate, and I can’t believe something so brazenly anti-democratic is legal.

Man I hate how close most of MN races were, either vote for progress or Gilead/Nazi. That said we pulled through a lot of them. Hate to see MTG still win but GA is slowly changing. It was a hard night to ignore slow results coming in.

MTG was never going to lose, but Boebert surprisingly did.
I'm flat out pleased with MN today.
Even, as I said before, with the split school board election. It at least gives more of the community as voice and now has to govern which is not as easy as just running their mouths nonstop.

As for Beto and Abrams, yeah that wasn't happening. Beto is not a serious candidate for Texas. And Abrams is not even trying to win a general election.
Both need to look at Walz for an example.

Wow. Didn't realize it was that close again.

There is apparently one county in Arms-the-Toddlers' district that has not been counted yet. 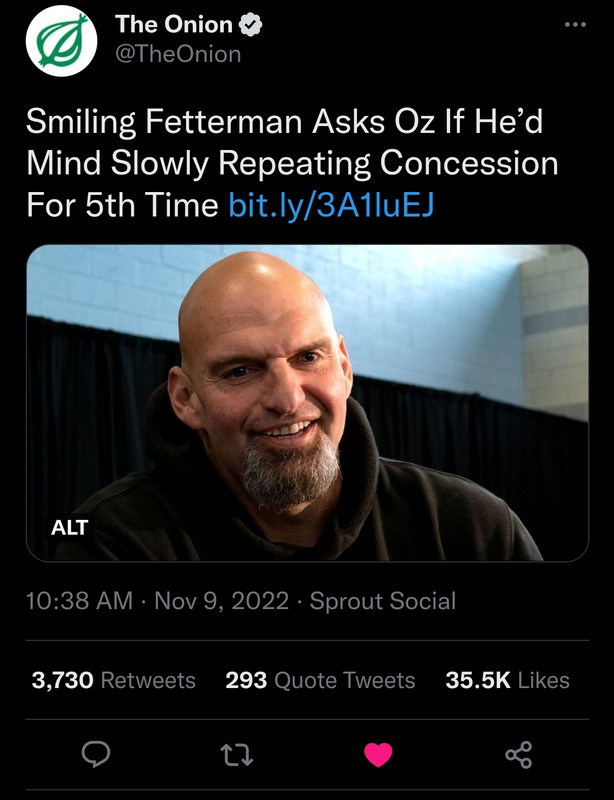 I'm very disappointed that I, a large man that often wears shorts and a Carhartt hoodie, am not represented by John Fetterman.

Why did Fetterman, the largest of the candidates, not simply eat the other one? /Lrrr

Would you want to eat Dr. Oz?

I like how all of his kids were wearing hoodies too on the acceptance speech platform.

A tale of democracy vs fascism:

In 2018, Michigan voted to de-gerrymander its districts and have a non-partisan committee draw new ones. These new districts went into effect for the 2022 election. Michigan also has absentee ballots available to anyone, we encourage mail in voting, and (new for 2022), just passed a Michigan constitutional amendment that:

Amends the Michigan Constitution to create early voting and right to sign an affidavit as an alternative to showing photo ID to vote. Requires state-funded return postage and drop boxes for absentee ballots. Clarifies that the state canvassers board has a nondiscretionary duty to certify results.

The result: not only did Democrats handily retain control of the governor's mansion, the secretary of State, and the Attorney General's office, they also turned the Michigan legislature blue for the first time since 1984. PS we also enshrined reproductive rights into our constitution.

In a concerted effort to disenfranchise its voters, Florida banned mail in voting, required voterID, and created a Florida Man Gestapo to patrol the polls.

We are at a crossroads, America, and these are your choices. Democracy or Fascism. Once the fascists discard their Clown President and allow Desantis to ascend, this will be the fight of the 2020s.

In a concerted effort to disenfranchise its voters, Florida banned mail in voting, required voterID, and created a Florida Man Gestapo to patrol the polls.

The first one is news to me, especially since my entire family voted by mail and will continue doing so (though we have to re-register in January thanks to some hinky sh*t). 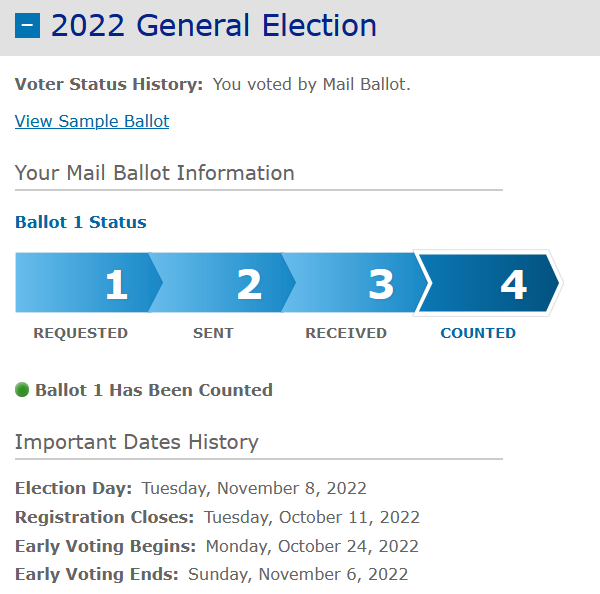 Granted we're in Gainesville which is solidly blue and pretty much rules what happens in Alachua County. Still unhappy about Florida going more red, mostly due to transplants during COVID (WHICH STANDS FOR FREEDOM!) and immigration from Cuba.

Excellent catch, Lou, as I was basing those things off right wing justifications for why they won: 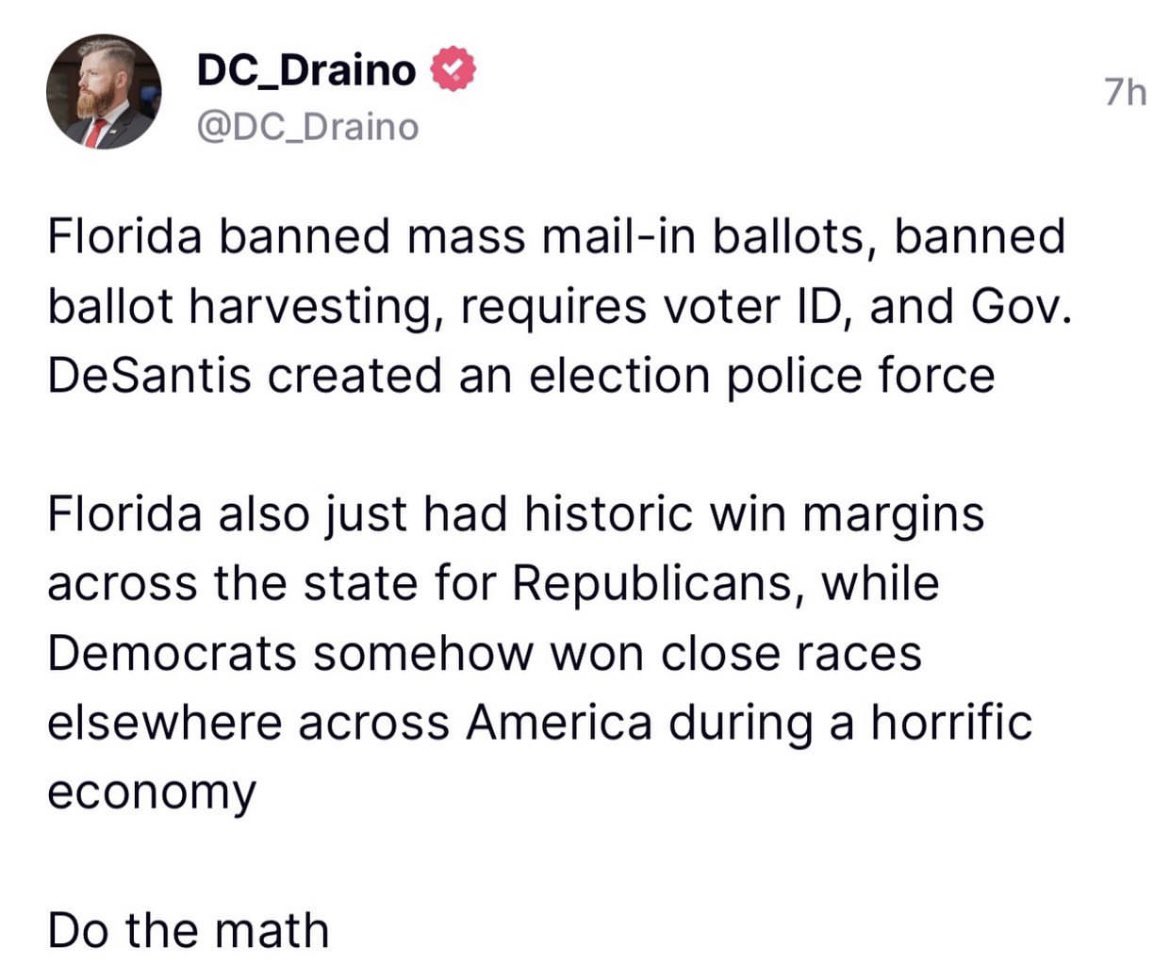 So I guess I'm not sure what the fascists are referring to in that "banned mass mail in voting" comment.

I have a degree in mathematics, and it seems pretty clear to me by doing said math that Florida's GOP had historic win margins by managing to suppress the rights of many of its opposition's voters.

I don't think that's the point he was trying to make, though. Maybe he's just bad at math.

As someone who is bad at math, DC_Draino does not represent us

Two different realities between Seth's tale and that Twit

He is like a human Gritty. I am jealous I can only enjoy my wins in Blue and not serving Oz as a cake such as found in STNG dreamland. Although, it may taste as bad as his vegetable salad he made for that video. 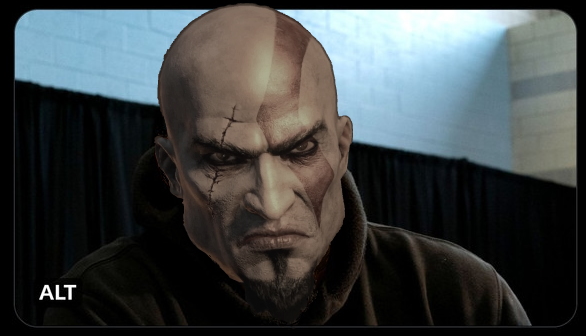 In less stellar news, Boebert is now ahead by 386 votes. BUT it looks like the remaining vote count is mostly in counties trending toward Frisch. There will be a recount no matter what.

Apparently the Dems decision to boost selected pro-Trump Republican candidates during the primaries paid off handsomely.

Democrats' strategy of spending millions to boost pro-Trump candidates in Republican primaries appeared to pay off Tuesday as the party ended the night with a clean sweep of the races in which it chose to meddle.

All six of the Republican candidates who seemingly benefited from the meddling in their primary victories fell to their Democratic opponents. Those races include a number of key House and gubernatorial races, as well as the New Hampshire Senate race.

Democrats spent more than $40 million boosting those six GOP candidates, all of whom expressed support for former President Donald Trump as a leader of the Republican Party or were backed by him.

In New Hampshire, incumbent Democratic Sen. Maggie Hassan easily defeated Republican and former Army General Don Bolduc, who was the Democrat-aligned Senate Majority PAC's candidate of choice to face what many viewed as one of the more vulnerable Senate members.

In one of the more high-profile races this cycle, Democrat Hillary Scholten defeated Republican John Gibbs in the race for Michigan's 3rd Congressional District, a seat held by anti-Trump Republican Rep. Peter Meijer. Gibbs narrowly defeated Meijer in the August primary after being publicly backed by Trump in what was seen as a sharp backlash against Meijer's vote to impeach the former president.

The Democratic Congressional Campaign Committee (DCCC) spent $425,000 in advertising to boost Gibbs, described by many as a member of the "extreme" wing of the Republican Party, specifically running an ad highlighting his conservative credentials.

Democrats' meddling touched three top gubernatorial races that all went in the party's favor on Tuesday, including in Maryland in support of Republican Dan Cox, in Illinois for Republican Darren Bailey, and in Pennsylvania for Republican Doug Mastriano.

Three weeks prior to Cox's victory, Bailey won his primary after also being supported by the DGA, as well as incumbent Democrat Gov. J.B. Pritzker, who spent $35 million combined to boost Bailey over moderate Republican Mayor Richard Irvin of Aurora, Illinois.

In May, Mastriano was boosted to victory in his primary with more than $840,000 in ads run by the campaign of his opponent, and now Democratic Pennsylvania Governor-elect Josh Shapiro.

I mean, we keep lambasting Dems for not playing hardball, and now that they do...

Man it sucks that the Boebert race is so close. I mean, I'm not surprised, I live in her district and I know what the people here are like, but I'd really, very much like to never have to hear a word out of her mouth again...

Man it sucks that the Boebert race is so close. I mean, I'm not surprised, I live in her district and I know what the people here are like, but I'd really, very much like to never have to hear a word out of her mouth again...

Crazy how it's gone back and forth. Barely over 1000 vote difference when I checked just now. Hoping she just goes away... to her Fox/OAN/Newsmax/whatever deal.

Apparently the Dems decision to boost selected pro-Trump Republican candidates during the primaries paid off handsomely.

Good when the play works. Scary when it goes wrong.

Votes keep coming in Nevada, looks like blue is inevitable