The five wackiest things that happened in Week 3, ranked:

FYI, the NFL today changed the ruling from a blocked punt to a punt for minus one yards. RIP Thomas Morstead's net punting average.

2. Jimmy G puts his foot down on racism.* 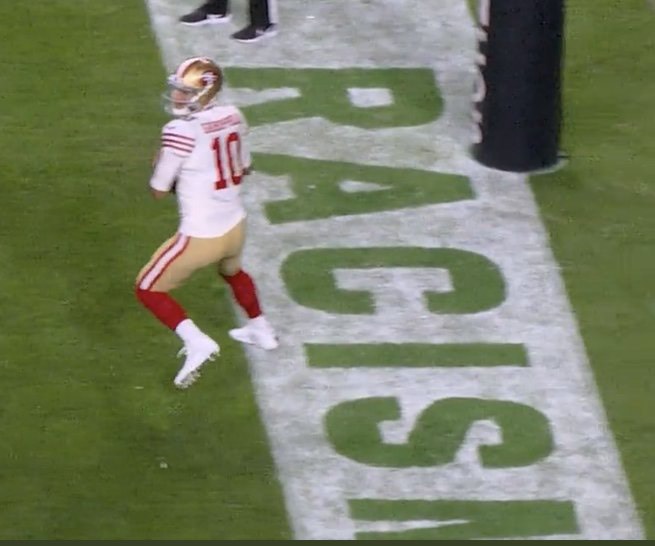 In typical hapless Jimmy G fashion, his self-inflicted safety prevented an even worse outcome on the play:

I can't decide if this makes Jimmy G smarter than or just as dopey as Dan Orlovsky. Maybe Legion has some thoughts?

(Here's why Dorsey lost his mind.)

4. The Jags beat the Chargers by a million points!

And you thought I was going to roll out this GIF:

Honorable mention: The Colts beat the Chiefs a week after getting shut out by the Jags; anyone good on the Chargers died in a midgame earthquake; Lamar Jackson has already run for 5,000 yards this season; the Eagles and Dolphins are undefeated; the Lions scored TDs on their first 11 possessions of the 2022 season to break a record held by the 1998 Niners and the 1920 Buffalo All-Americans (who finished 9-1-1 but were robbed of the Brunswick-Balke Collender Cup when John Daniel "Buster" Orlovsky stepped out of the end zone and the Akron Pros were awarded a 2-0 win); Tom Brady showed up for the Green Bay game in a Tom Brady T-shirt; Packers and Bucs combined for 26 points; and the Broncos and Niners combined for 21 points.

Even wackier, I think Week 4 can top it. BELIEVE IT!

From NFL.com, which gives us a new No. 1. Top 5 are Eagles (3 last week), Bills (1), Dolphins (8), Packers (5) and Chiefs (2). Basement teams are Commanders, Jets and Texans and not the Panthers for some reason. I guess winning will do that.

The latest 538 predictions, meanwhile, point to a Super Bowl with the Bills (16% chance to win it) versus either the Bucs or the Eagles (both with 11% chance to win). Also according to this model, 13 teams have less than a 1% chance to hoist the Lombardi trophy next February. That list includes GWJ favorites Patriots, Panthers and Seahawks. Good luck next year, y'all!

REASONS WHY I, A PANTHERS FAN, AM A TINY BIT OPTIMISTIC

Dude has some wheels! Even weirder, Carolina won with 22 points but scored only one offensive TD (this one). Here's the field-level view with Shenault running right at you. And here's the Panthers' Spanish language call, the source of so much joy in this world.

(If we're being honest, my first thought was, Well, we're stuck with that stupid m-----f----r Matt Rhule for one more week. I'm totally hate-rooting for the Panthers this season.)

A QUICK WORD ABOUT THE EAGLES

I think they're good? Someone needs to explain what's going on.

Plenty of good games this week:

Sunday late (only three games and they're all sorry): Cardinals-Panthers, Patriots-Packers (GOTW, featuring QAaron and whoever backs up Mac Jones), Broncos-Raiders

At least London games gets us another free network game. If they don't suck as bad as primetime games. Ugh.

I've watched 0 minutes of Eagles football this year but I'm sure when they do come back to earth it will be Jalen Hurts related.

I kept Googling for this gif on Sunday and couldn't get one. Guess I should have waited a few days.

Pink Stripes
Posted: September 29, 4:53 AM
Going three-wide into turn one

Current state of the Patriots fanbase with Brian Hoyer leading the team into Lambeau: 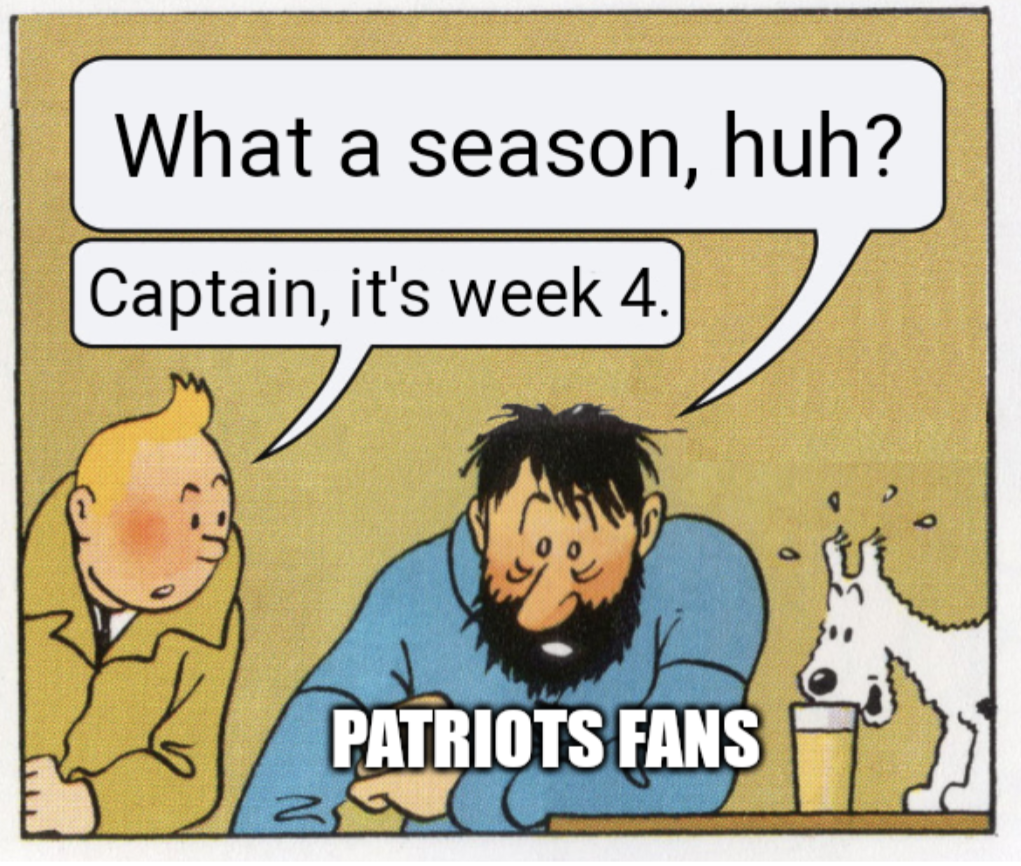 Heard someone say that Doug Peterson was tied with Urban for 5th all-time in Jags coaching wins... after coaching three (3) games.

I kept Googling for this gif on Sunday and couldn't get one. Guess I should have waited a few days.

Same, but I finally figured out to make one. There's probably a better and more efficient way, but here's what I came up with, FYI:

1. Find Twitter video you think (a) would make a good GIF and (b) would irritate one or more people #onhere
2. Download it via https://twittervideodownloader.com/ (dunno if this is the best; it's the first search result I got, and it worked)
3. Convert video to GIF via https://ezgif.com/video-to-gif; Imgur also lets you convert vids to GIFs
4. Upload GIF to Giphy

The things I do for you people ...

At this point, seems like Chiefs at Bucs will likely happen Sunday night; for all the devastation in places like Fort Myers and Punta Gorda, those are 100-ish miles away and the Tampa area got really, really lucky with this one; if that storm surge had waltzed into Tampa Bay per the earlier projections, there might not have been another game in Tampa all year.

Panthers Twitter is jacked up for Sunday because (a) one-game winning streak, and (b) Carolina is playing at home against the Cardinals, whom the Panthers routinely embarrass. I'm predicting doom!

My brother and I are going to be at the Bills v Ravens on Sunday. Looks like the over under is 51, which feels low given how bad both defenses are playing right now. The only caveat I have to that is the weather looks like it will be a drencher.

This looks like a showdown between MVP candidates and a likely awesome offensive game that will probably be decided by turnovers on a wet field. I don't like my Ravens' odds in a shootout against the Bills, but I aim to enjoy it nonetheless.

Heard someone say that Doug Peterson was tied with Urban for 5th all-time in Jags coaching wins... after coaching three (3) games.

Doug's in a 3-way tie at the bottom with Mularkey and Urban, who coached 1 and 0.76 seasons, respectively.

Mike McDaniel is currently tied for 11th in regular season wins among Dolphins coaches with three.

If he literally never loses a game, ever, he'll catch Don Shula in 2038.

The Dolphins are both better and worse than everyone is saying at the same time. Some major power ranking had them #1 this week, which is silly and FootballOutsiders has them #11, which is closer, but doesn't (yet) factor in strength of schedule.

On the road on a short week with all of their walkthrough available to watch on Twitter and the possibility of some Teddy Bridgewater minutes feels like it could be a problem.

Maybe Miami can re-sign Cam Wake for another walkoff safety.

Coming up after Cincinnati are Jets - Vikings - Steelers - Lions - Bears - Browns - Texans. Compared to the opening four weeks that stretch is... let's go with gentler. Although Detroit and Cleveland are potentially more trouble than my Dolphin-supporting friends are giving them credit for.

In Butt Punt news, Charmin reached out to Trent Sherfield to offer him something soft for his cheeks.

Edit : apparently the Dolphins noticed someone filming their walkthrough, so all their offensive plays have 12 players on the field.

I didn't know what the fencing posture was until tonight.

Maybe a few more than I thought.

Can't believe he played again Sunday after wandering around dazed. No way he cleared any protocol

I didn't know what the fencing posture was until tonight.

Just turned on the fame to and saw the replays of Tua. Hoping the best for him and hits family.

Nice shovel by Teddy. And drive in general. Except the kicker. Blocked and doinked now.

Dolphins to sign Fitzmagic off the announcer's booth for the second half.

TheGameguru
Posted: September 30, 3:12 AM
Here to save you all

This sucks…why was he even out there…god I despise these Thursday Night games.

I really want these new Bengals uniforms to be referred to as the Joe Exoctics . Make it happen.

This sucks…why was he even out there…god I despise these Thursday Night games.

Yeah, that was terrible.

I really want these new Bengals uniforms to be referred to as the Joe Exoctics . Make it happen.

I thought the Dolphins were playing the Colts at first.

Good video from a pretty decent YT doc on Tua.

That was some straight up Shanahan/RG3 level irresponsibility.

I hope to gods the NFLPA does something actually useful and launches an investigation independent of the league.

Same thing happened to Chargers TE Donald Parham last season, also on TNF. That was terrifying. The Tua injury was fractionally less terrifying because I knew what was happening.

It was still terrifying, though.

Also scary but completely unrelated, Football Outsiders accuses the Panthers of football malpractice by running him between the tackles and not throwing him the ball.

CMC, btw, didn't practice Wed (now his usual off day) or Thurs (uh oh) because of a quad injury. He was running around in practice this morning, though. His chance of playing Sunday seems about 50-50.

That was some straight up Shanahan/RG3 level irresponsibility.

No. This is considerably worse. Playing on a shredded knee is one thing. Playing through fresh head trauma is a whole different level of bad.

I think we're going to find out that the concussion protocol's being taken as seriously as the Rooney Rule.

As expected, Mac Jones is out for Sunday. Who's ready for Hoyer Paranoier?

As expected, Mac Jones is out for Sunday. Who's ready for Hoyer Paranoier?