Fresno should have had Josh Allen and Jordan Love. I will go to my grave cursing Tim DeRuyter.

If it makes you feel better, I'm sure Winfield would have picked both of them off as well.

Panthers QB HEY DARNOLD is just as delusional as his head coach. These two were made for each other.

It's OK if I hate-watch the Panthers this season if HEY DINGLEBERRY is the QB, right?

Now, to Sam's credit, he's absolutely right; if you consider the global population, Sam Darnold is in the tiniest fraction of the first percentile of good QBs on the planet. Right now, he's probably one of the 100 most-talented QBs on the entire planet, and I'd say absolutely top 150.

Statistically speaking, it's hard to pass on that kind of proportional greatness. Sounds like it's time for a contract extension, Carolina.

The funny part is that their solution to the Sam Darnold problem is gonna be to draft another Sam Darnold.

Fresno should have had Josh Allen and Jordan Love. I will go to my grave cursing Tim DeRuyter.

If it makes you feel better, I'm sure Winfield would have picked both of them off as well.

Because Josh Allen was already in the NFL before Winfield played against Fresno.

Jordan Love... well he threw 17 INTs in his final year in college. I'm probably gonna have to spot Winfield one there.

Some updates about the Brian Flores lawsuit. First, Flores says he sent a memo to Dolphins' execs about Stephen Ross wanting to tank. Next, the Texans are named as defendants alongside the Dolphins. Then there's Steve Wilks and Ray Horton joining in on Flores' side.

Finally, and perhaps the most damning if true, Mike Mularkey claims the Titans did sham Rooney Rule interviews after he was hired as their head coach. Just when you thought this story had gone quiet.

There's an interesting side story to this too. Apparently the Dolphins planned on bringing in both Tom Brady and Sean Payton, with Brady potentially being offered a minority stake in team ownership.

The Brian Flores lawsuit basically put the brakes on all of that.

With Brady under contract for only one year, though, this situation might come back up again next offseason, once the lawsuit is resolved.

Well, so much for a potential record-tying Brandin Cooks trade. Cooks has signed his first ever contract extension with a team he has already played a game for, adding 2 more years onto his existing contract with Houston (which was signed with LA back in 2018).

Of course, this means Houston will have opportunities in the next couple of years to trade him, so, here's hoping.

Dwayne Haskins was hit and killed by a car this morning. Wasn’t even 25 years old yet.

What I read is that his vehicle ran out ot gas. Not sure if that's accurate or just social media chatter.

Adam Schefter stepped into it today with his Haskins tweet, in which he couldn't help but take a pot shot at his NFL career while announcing his death: 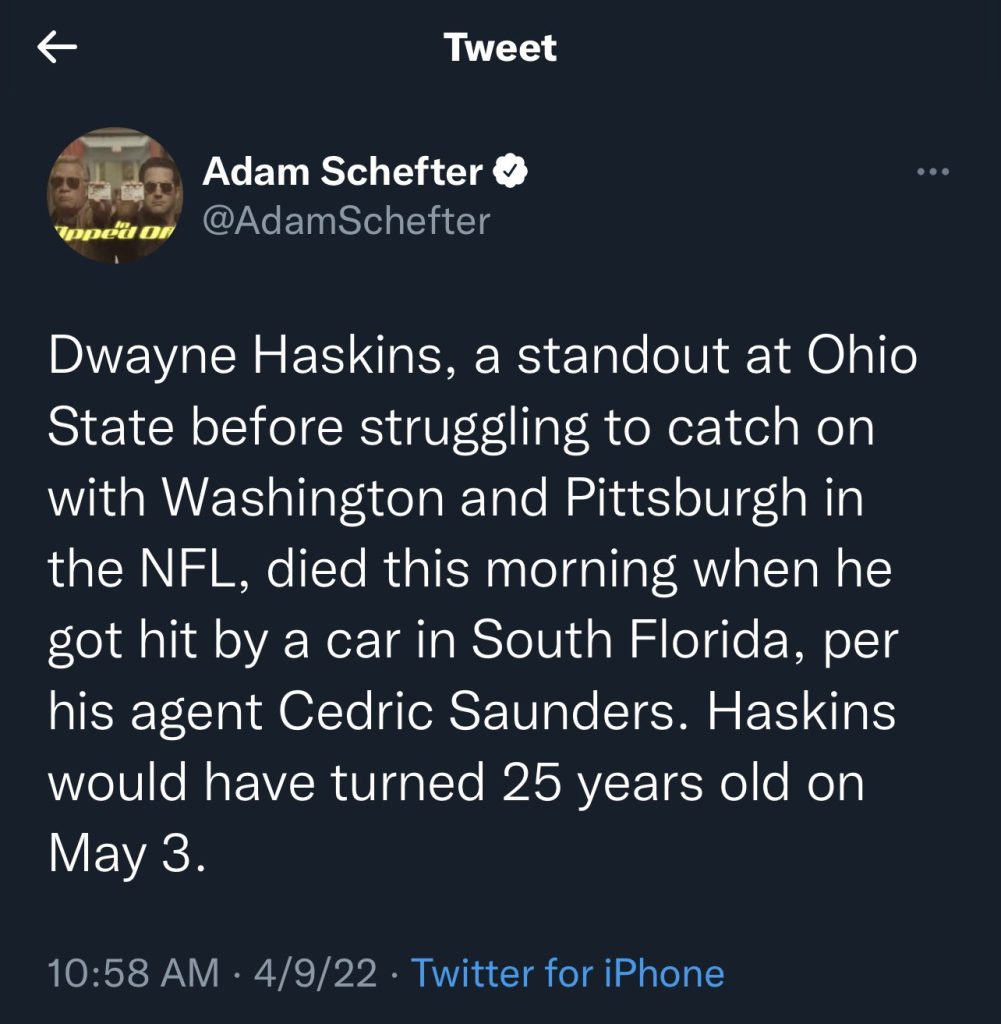 The reaction was swift and loud, at which point Schefter silently deleted the tweet and replaced with basically the same tweet minus the "struggling" part.

People were not impressed and started rattling off Schefter's other recent failings: 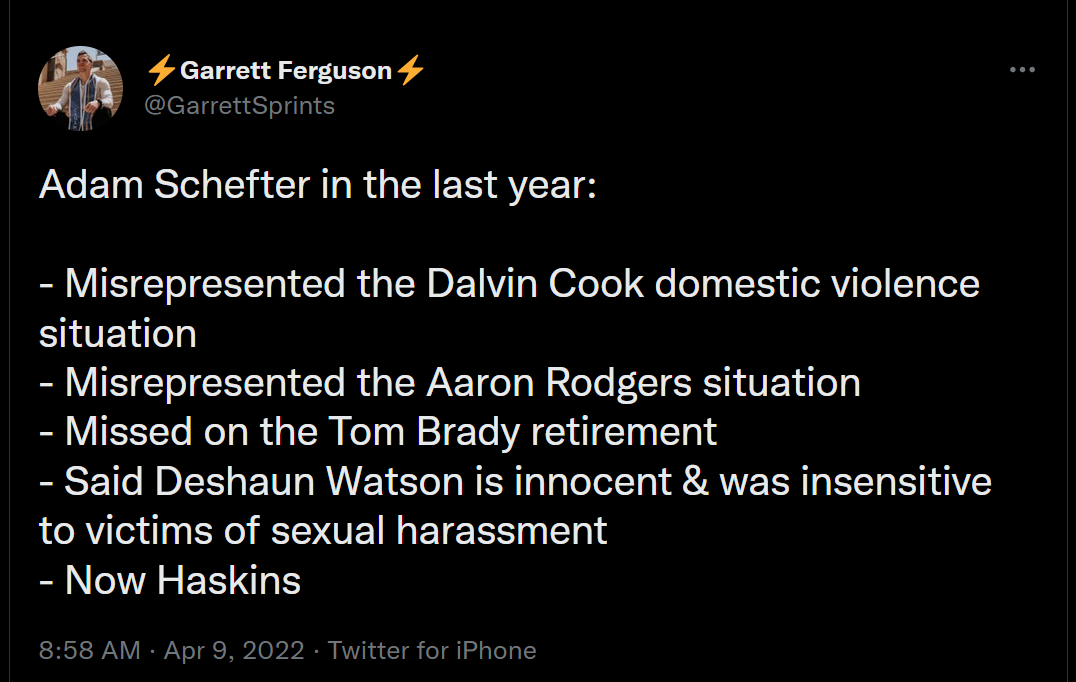 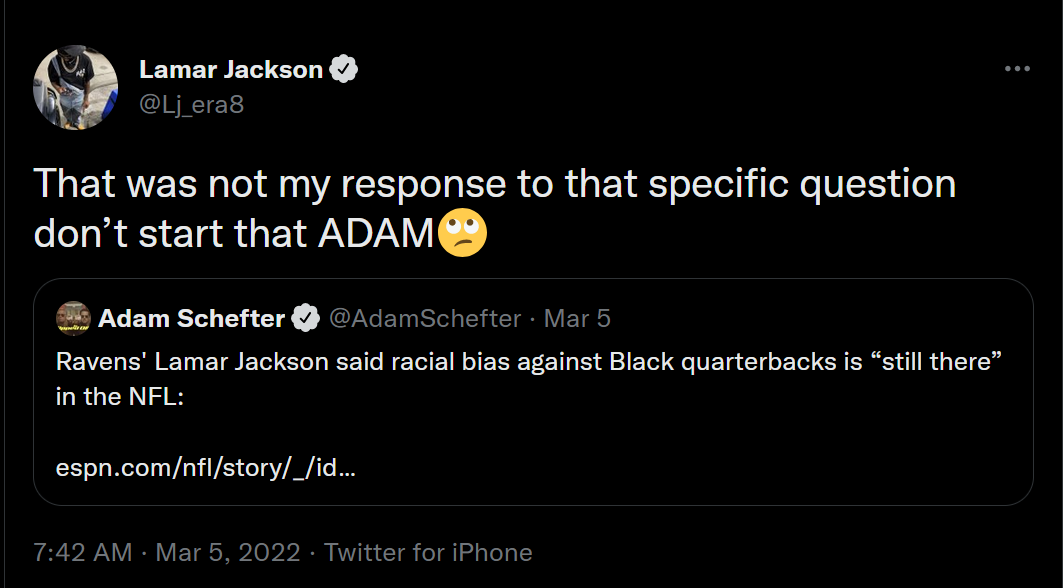 Of course, we've discussed something similar in the wake of his months-long "Mac Jones to the 49ers" campaign.

But old man Gil Brandt said "hold my beer" and went on the radio, describing Haskins as "living to be dead", sniped at him for "leaving school early" (he entered the draft as a junior after 1 year of starting), bashed his work habits, suggesting that if he had stayed in school another year he might not have done "silly things" leading to his death... just said a lot of stuff that of course led to a carefully crafted apology tweet later.

Look, we've certainly had plenty of criticism of Dwayne Haskins the football player in these threads, and I'm not going to suggest that his NFL career had lived up to his draft status or physical talent level up to this point. But there's zero need to make the day of his tragic, accidental death be a time of breakdowns of his NFL shortcomings.

I do think it's worth noting that the reason Haskins was in Florida was because he was there along with the rest of the Steelers QBs and pass catchers at Mitch Trubisky's Florida home, where the players were holding their own offseason passing work. For someone having his past work ethic brought into question, this bit probably deserves to be mentioned.

Same guy that laughed at a female reporter in 2017 for talking about routes.

It's pretty clear with this added to the equation that Cam is holding onto some awful sexist beliefs.

Unsurprising. Also unsurprising is the platform he said it on.

Pink Stripes
Posted: April 12, 2:12 AM
Going three-wide into turn one

His son is gonna have to read the letter again.

Congress shares details with FTC of alleged Washington Commanders financial scams against customers and the NFL:

According to the Washington Post, the Committee sent a 20-page letter to the Federal Trade Commission regarding allegations that the team may have withheld as much as $5 million in refundable deposits from season-ticket holders, and that the team may have hidden cash that was to be shared by all NFL franchises.

Former Washington employee Jason Friedman, who spent nearly a quarter-century with the organization, told the Committee that the team kept two sets of books, and that one set of financial information underreported ticket revenue to the league. The process of intentionally allocating revenue to the wrong event was known, according to Friedman, as “juice,” with the team allegedly spreading revenue that should have been shared with the league to non-NFL events at FedEx Field.

Dan Snyder will still own the team by the start of this season.

I mean, messing with powerless women employees won't get anyone's attention, but you mess with old, rich, white dudes' money...

tom brady’s plan was to fake retire, become an executive with the dolphins, bring in sean payton to coach, then unretire but the brian flores lawsuit blew everything up

tom brady’s plan was to fake retire, become an executive with the dolphins, bring in sean payton to coach, then unretire but the brian flores lawsuit blew everything up

Raiders sign Carr to a 3-year extension. Sounds like it's $40.5m annual average, so he'd slot in at #5 on the QB chart, just slightly edging out Dak and Stafford but a clear step behind the Rodgers/Watson/Mahomes/Allen tier above him.

Sammy Watkins visiting with the Packers.

Jimmy Garoppolo is still a 49er.
Baker Mayfield is still a Brown.
Collin Kapernick is still ready to play and available.

Watkins at this point is a downgrade from MVS, but definitely better than having nobody in the receivers room. At $4 mil, can't complain about the price. He's trending in the wrong direction, as evidenced by that price, which a year ago was $6 mil when he signed with Baltimore.

As a veteran WR3, it's an OK move, but it means the Packers are still looking for WR1 and WR2. If they intend for Watkins to be WR2, though, I think they'll be as disappointed as Baltimore was.

The earliest either of these are likely to change is draft weekend. Baker has a better chance of moving given he had his shoulder surgery earlier, and to his non-throwing shoulder, and is currently throwing the ball. Not sure when Jimmy will be able to begin throwing again, but at this point I don't expect a lot of movement until he gets to that stage.

I hear that.... Then I read something like this and.

Watkins signed a one-year contract on Thursday, which according to ESPN’s Adam Schefter is worth up to $4 million. Expect at least some of that $4 million to be in the form of incentives, and the Packers may elect to use void years once again to keep his salary cap hit especially low for the coming season.

4m would suck if it was actually tying up 4m. If it's actually mostly incentives + the magical void years. Not much of a cost at all for a roulette spin.

Maybe the actual body is a problem that the Packers wait and see if Watkins is a dud this year. Last year they had some gem free agent pickups and some duds. Hindsight on the duds they didn't really cost all that much besides roster time. (It wasn't Bojorquez fault)

Raiders sign Carr to a 3-year extension. Sounds like it's $40.5m annual average, so he'd slot in at #5 on the QB chart, just slightly edging out Dak and Stafford but a clear step behind the Rodgers/Watson/Mahomes/Allen tier above him.

Heard a good analogy that this is basically a franchise tag contract (they can cut him/trade him next year for next to no dead money). In return Carr gets a no-trade clause. Pretty smart in case the Chandler Jones + Davante additions don't sync and they end up 4-13 with a top-5 pick. Cut or trade Carr and go with your rookie

Heard a good analogy that this is basically a franchise tag contract (they can cut him/trade him next year for next to no dead money). In return Carr gets a no-trade clause. Pretty smart in case the Chandler Jones + Davante additions don't sync and they end up 4-13 with a top-5 pick. Cut or trade Carr and go with your rookie

Yeah, we got the details of the deal yesterday. I would say it's a bit little less team-friendly than a franchise tag though. While it's true they can cut him for almost no dead money, they have only until the 3rd day of the waiver period in 2023 to make that decision. After that date, a bunch more guaranteed money kicks in in 2023 and a bit in 2024 as well.

The waiver period begins the day after the Super Bowl, meaning realistically they have to decide to move on from Carr by the end of the season, without having time to actually line up a successor. It protects the Raiders if Carr completely crashes and burns in 2022, but short of that, it's hard to envision them releasing Carr before the additional guaranteed money triggers.

Assuming Carr doesn't completely erase his value as an asset, I think the deal is more realistically a 2-year deal, with the ability to release him with about $10m of dead money in 2024. If the team is bad in 2022 but Carr isn't wretched enough to just cut outright, they could draft a QB in 2023 and just ride out Carr as a bridge QB for that year, and/or find a trade partner that Carr's willing to waive the no-trade for.

Stephon GIlmore to the Colts.

Death threats and racist comments to Deebo Samuel for wanting to get paid more.

Terrell Owens catching a TD in Fan Controlled Football. Wonder how much the NFT for that touchdown will sell for.