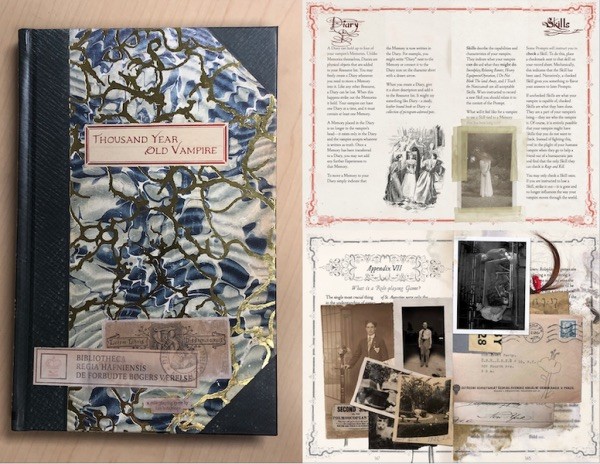 This poor orphan kid had been through a lot, and I'd barely gotten started. The kindly abbot turned out to be a blood-sucking monster that transformed our plucky protagonist into a vampire. His first victim was his only friend at the orphanage, and the nun he relied on turned out to be a Satan-worshipping cultist hellbent on starting the apocalypse. This orphan's life was a messy disaster before he got tangled in these supernatural machinations; he was already on the cusp of cracking before all of this happened.

I don't think any of us are well right now.

Burnout is something we were all experiencing near the end of 2020. Whatever this is now, it's beyond burnout. If you are in a place similar to the place I'm in, the things you enjoy can sometimes feel like they are barely slowing down your anxiety. But when things resonate in these bleak times, boy do they resonate.

Thousand Year Old Vampire resonates. It is a tabletop RPG you play alone that is fundamentally about being disconnected from the world around you. It is also about memory and the blurring of time. Sitting at the table, three years into 2020, this is a powerful subject for any creative work. Your vampire will soar through time, with people coming and going from their life. Ultimately, they'll forget what was once wildly important: people, places, and memories. And that's devastating, but it also captures the chaos and beauty in all of this we're living through.

My vampire orphan tried to lean into his new circumstance, living as the center of the satanic cult. They fed him sacrifices, and in exchange, he was a symbol for them. But he forgot his past, and the monotony of his day-to-day (er, night to night) existence grew wearisome. One night, in a boredom-inspired fury, he slaughtered the cult, leaving him entirely alone and forced to re-engage a world he no longer understood. These turn of events came from skillful prompts, which provided just the right level of vagueness and specificity to drive the narrative. Mostly though, they came from me and clearly reflected my own anxieties about the world no longer being decipherable.

Despite its devastating subject matter, there's something safe and comforting about Thousand Year Old Vampire. It coaxes you to push your imagination and wrestle with some demons (both in the game and outside of it), but the layer of removal between it and reality makes it a safe place to explore trauma. This is what good art does, it connects us to deeper, sometimes dangerous truths while also insulating us from the psychic damage that these truths might inflict in their purest forms. It provides a safe space and opportunity to wrestle with some of the murkiest aspects of existing in the world. People say art can be transformative and this is precisely what is meant. When things are bleak, art can become a beacon. It can zoom us out of the darkness and show us the light around us. It can communicate the universality of everything we are thinking and feeling, that we're part of a collective human experience, and that we aren't alone, trudging through endless despair. In this way it can be a salve. And it is also just plain fun! There is satisfaction in seeing people making cool things that click.

Even outside the experience of playing the game, Thousand Year Old Vampire is beautiful. I instantly regretted merely getting the PDF because the artwork is just stunning. This is a book that can sit on a coffee table and elicit curiosity from guests and inspire conversation.

There are lots of amazing games out now, and many around the corner. But I can't imagine a game more necessary for this moment than Thousand Year Old Vampire.

I googled to look into this more and I found this from the creator on the very first page of the site...

My name is Tim Hutchings and I made this stuff...
...sometimes with help and sometimes single-handedly but never alone. None of the things I make would exist without the amazing society we live in, the cultural institutions we build to preserve it, and the people who appreciate it. So I make a request:

If you are a supporter of the near or far right I am going to ask that you not buy my games. I don't want your money, but more importantly I don't want you to feel comfortable enjoying things produced by the people and systems you want to destroy. Yes I mean members of cartoonishly evil hate groups, but I'm going to include Trump supporters too. You think the election was fixed and pandemic measures are bad? Go to hell. You are lobbying for the death of my friends and relations, you are pushing for dangerous authoritarians to destroy the systems that let books like mine come to be. And this goes for equivalent groups outside the US–you know who you are.

People who make art and beauty and fun universally revile you and it's time you started to feel that. You aren't welcome here, you don't get to play with my things. Shoo.

You know I'm right. It's why you're mad right now. Those people, the ones that lie to you to get you outraged, they aren't your friends. Hell, they'd be making fun of you for trying to buy a vampire game because they are bullies who hate you.

So to sum it all up: There has been too much violence. Too much pain. But I have an honorable compromise. Just walk away. Give me your pump, the oil, the gasoline, and the whole compound, and I'll spare your lives.

Literally putting his money where his mouth is. I am buying this today.

Like Player Hater, I Googled this and made two discoveries.

Tim Hutchings has a bunch of *really weird* games, some of which look amazing.

The rabbit hole of "Solo Print and Play" games is deep and full of wonderous things. I wish I had more time and less things to do...

Solo tabletop RPG not a video game? Didn't know this was a thing. Very interesting.

Not even RPG. Loads of strategy/tactics games out there.

Well I grabbed a community copy at itch.io. Going to use that like a demo, and if it's remotely as interesting as it sounds, throw him some cash. Just a whole thing I didn't know existed here.

Thanks for reminding me about this game Richard. I picked up the PDF version last year during lockdown but didn't get started (distracted playing online board games and co-op PC games!). I'm going to make a concerted effort to play it as it sounds like a unique experience, the physical version does look great too.

Here's the SU&SD video that brought Thousand Year Old Vampire to my attention:

I had to stop in and voice appreciate the picture of that handsome devil in the header.