Aww, seeing the Austin skyline in Carl's pics makes me miss it. When the heat and the air weren't murdering me, Austin was divine.

That article really blew it by not mentioning his recruit rating.

I'm old enough to remember all the "Hiney Wine" drive time radio bits from the 80's that were apparently syndicated across local stations nationwide.

Alabama coach Nick Saban singled out Texas A&M for "buying" its top-ranked signing class and threw a spotlight on the unintended effect of name, image and likeness rights on recruiting during an event with local business leaders Wednesday night in Birmingham.

"I mean, we were second in recruiting last year," Saban told the audience. "A&M was first. A&M bought every player on their team -- made a deal for name, image, likeness. We didn't buy one player. All right? But I don't know if we're gonna be able to sustain that in the future because more and more people are doing it. It's tough."

Saban wasn't the first coach to call out the Aggies by name. In February, Ole Miss coach Lane Kiffin quipped that, "Texas A&M was going to incur a luxury tax in how much they paid for their signing class."

That prompted a stern response from Texas A&M coach Jimbo Fisher during his signing day news conference the following day when he said that coaches spreading rumors about deals promised to recruits were "clown acts" and "irresponsible as hell."

The problem with NIL, Saban said on Wednesday, is "coaches trying to create an advantage for themselves."

Saban said coaches know how much money is available from their school's collective -- a group of program supporters who pool their resources to offer deals to athletes -- and "how much he can promise every player."

"That's not what it was supposed to be," he said. "That's what it's become. And that's the problem in colleagues athletics right now. Now every player is saying, 'Well, what am I going to get?"

I am glad I am more a fan of the crazy and less concerned about the overall health and well-being of college football.

Am I alone in wondering if these quotes by Saban are a sign of diminishing capacity? I'm not even mad, I'm actually concerned for the guy.

Look up his comments about the state of the sport the year before he got Kiffin. As far as I can remember it's basically the same.

SEC media days are going to be pure gasoline!

I do wonder if Saban is signalling that he's about done.

Finally, looks like all the conferences are about to do away with divisions, and probably going with a model of keeping three permanent opponents.

Given he was addressing local business leaders was he complaining about the NCAA or was he imploring his audience to pony up more?

Am I alone in wondering if these quotes by Saban are a sign of diminishing capacity? I'm not even mad, I'm actually concerned for the guy.

Nah, he just sees that the under the table infrastructure they built that allowed them to exceed is being supplanted by this new semi-above board stuff.

Not saying they were alone in how they got players using not so legit means, just that they were the best at it. Without the proper infrastructure in place, you have what happened at UT. Take a top Bama recruiter and try to replicate the standards and practices from Alabama without all the behind the scenes support and you end up with lots of level 1 infraction reports.

Given he was addressing local business leaders was he complaining about the NCAA or was he imploring his audience to pony up more?

Dude was begging for money. All his under-the-table stuff is getting outmoded and now he is struggling to keep up.

Just a few weeks ago a Louisville WR transferred to Alabama. When he hit the portal all the Twitter and message board talk said he was going to Alabama. Not supposed to be able to recruit before they are in the portal but this guy was a sure thing all the sudden. And then a few days later, yep.

Just a few weeks ago a Louisville WR transferred to Alabama. When he hit the portal all the Twitter and message board talk said he was going to Alabama. Not supposed to be able to recruit before they are in the portal but this guy was a sure thing all the sudden. And then a few days later, yep.

I think anybody that puts their name in the portal without a spot is kind of naive. I'm sure they're "handlers" are having conversations with teams if they're smart. Might be a relative. Might be a high school or 7 on 7 coach. But it happens. And as long as it's not direct interference with the player, it's probably technically legal.

Those that jump without known spot(s) to land are very likely to lose the game of musical chairs.

Ooooohhhhhh, it's getting SPICY. 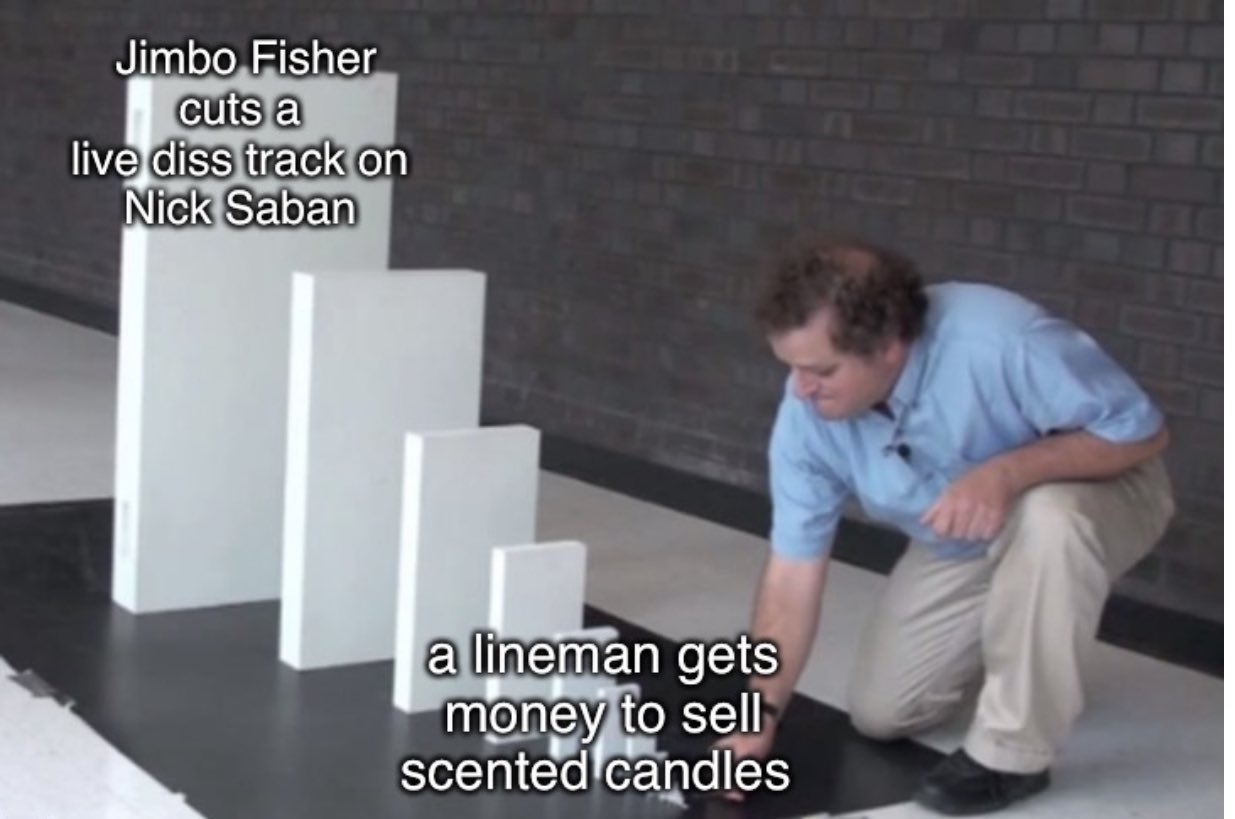 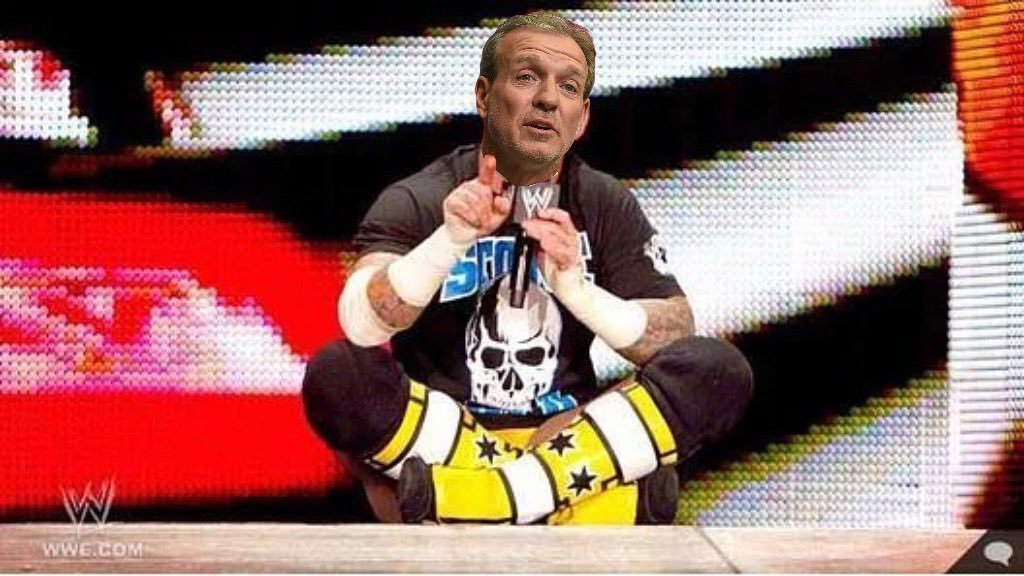 GOD I hope so.

Head football coaches turning into screaming manbabies as a perk of paying student athletes should have been advertised way more a long time ago.

I saw Aggie reactions to Jimbo's presser before I saw it for myself. A small minority said it was bad; the majority, along with my father and brother, said it was great. So I listened to it on my drive home.

I shouted "G*D DAMN!" at least three or four times. This has got to be why people watch professional wrestling. When they established that Nick had tried to call him, but Jimbo said he wasn't taking the call, "We're DONE", man, this is some hell hath no fury like a mentee scorned sh*t. I love it.

I assume everyone has the full context here, but a few may not, so I'll mention that Jimbo was Nick's OC when he won his first championship, at LSU. Supposedly they were still friends until now.

Maybe, for the sake of friendship, and maturity, they'll work it out. I honestly do think that Saban was just trying to fund raise by scaring his donors about big bad Texas A&M. It's still a very sh*tty thing to say, and I don't blame Jimbo for being furious. I always say that if you're not a friend 100% of the time, you're not a friend.

Nick Saban, while admitting he was wrong to "single out" Texas A&M and Jackson State in comments he made Wednesday concerning the implementation of name, image and likeness rules, told ESPN on Thursday he wasn't backing down on his stance that paying high school players under the guise of NIL could potentially ruin college sports.

"It's gotten completely out of control and not a sustainable model," Saban said. "It's to the point where you've got these attorneys/agents calling collectives and saying, 'Pay my player a hundred thousand dollars a year,' and then they want their piece of that. They all want a cut."

Saban said he reached out to both Texas A&M's Jimbo Fisher and Jackson State's Deion Sanders wanting to apologize for bringing their specific schools into the conversation.

"I should have been more specific when I said 'bought' in saying you can buy players now through name, image and likeness and never mentioned any specific school and just said 'across the sport,'" Saban said. "That's on me. But other than that, I don't have any regrets over what I said Wednesday [at the World Games in Birmingham speaking event]."

Saban said he's not apologizing for speaking out and understands he's going to be criticized.

"A lot of people are silent on this, and some of it has been people lumping NIL in with using NIL to pay players to go to school," Saban said. "But, you know, at this stage of my career, I'm not worried about what people think of me."

That is the least Skip Bayless has ever said.

So the Aflac commercial reunions are going to be awkward.

(BTW, I'm ready to talk about college baseball. My Vols are pretty good this year. Just beat last year's national champs 27-2 last night (Mississippi State's had some injuries and aren't likely to make even the SEC tourney, but still...))

I'm all for a college baseball thread. The postseason is SO good!

Man that didn't take them long

I'm all for a college baseball thread. The postseason is SO good!

Carl for the love of god read your Sleeper PMs.