While you likely never played it and absolutely cannot access it anymore, The Seventh Link captured my young imagination as a kid. To this day, it still informs the things that draw me into a game, with its compelling narrative that didn't tell the player much and left plenty of space to fill in the blanks—in other words, my wheelhouse. In fact, this CoCoMax-3 Ultima-like was even the subject of the first topic I ever created on the forums.

And now, as we enter the third year of a global pandemic, my memories are drawn back to it again, though I'm not entirely sure why. Part of it may be a general nostalgia for a world that no longer exists, but I suspect a big factor is trauma. You see, we're living through a societal and all-too-personal trauma right now, and back when The Seventh Link entered my life, I was navigating what I now recognize as my childhood trauma.

I don't have a lot of memories from childhood, but I do recall aspects of The Seventh Link. My recollection might be altered by time and the failures of memory, but that's one of the most striking things about this—or any—dead game. We only have how we remember it, and that is more real than the way it actually was.

Here's what I remember. 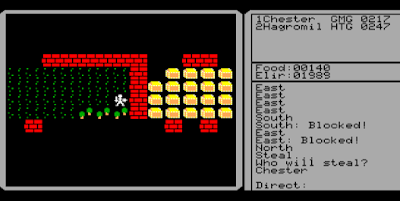 Earth was dying. Humanity needed to flee. The colony ship found an alien planet that was nearly habitable. In what I imagine is scientifically sound, the colonists contained and harnessed a nearby black hole to accelerate the planet's evolution and habitability. And just in time, too, as their ship was out of power. So, humanity resettled on this new planet which just so happened to be filled with fantasy monsters and unknown secrets.

Over time, memory of the planet's origins slipped away. The colonists forgot their apocalyptic origin and fully embraced a medieval societal reboot. The Seventh Link begins thousands of years later as the black hole's containment field is on the cusp of failure. The player must find seven power packs to recharge the field before the black hole swallows the world.

I don't recall a main villain. The plot, despite having its foot in McGuffin-land, felt unlike any story you see in modern games. It was about a world that grappled with how it told its own story. Most of the people didn't know they were effectively aliens on this world, and the people who did understand the truth knew only fragments of it. It played with heady ideas and represents a road of games we didn't go down. Thinking on it now, I imagine all of the other dead games out there. Possibilities buried. Treasure troves of ideas and creativity entombed in the forgotten dungeon, lost in the chasm of time. 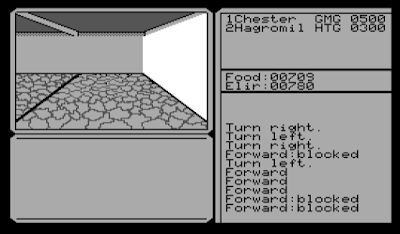 I can't help but wonder about my own mind: what's in there that's forgotten and buried? When I first booted up The Seventh Link, I had no way of knowing that so much of my life would be lost in just a few short decades, much like the colonists I was meeting. A series of traumas would leave my memory hazy and incomplete. Even the game I was ravenously consuming would all but disappear.

In the decades that followed, plenty of memories remained—studying theater at Oxford, traveling the world for film festivals, writing dozens of scripts, falling in love, getting disowned by my family, witnessing the rise of fascism in my country, and living through a global pandemic. There's life in my memories, possibilities explored and opportunities missed, the breadth of human experience.

Yet there is also darkness that I can recall with vivid detail—violence suffered at school, threats of a suicidal, attention-seeking mother, countless nights lying awake at night and feeling utterly alone. But not baseball games my brother and I played with our father that I only know about because I have photographic evidence—those are lost forever in the haze of disassociation.

What do we remember and what do we forget? And why?

A few pieces of The Seventh Link survived the mental purge of my childhood. I remember my elation at finding the first power pack and how I was able to steal from treasure chests from behind walls. I even remember the layout of a dungeon and the stinginess of the economy as I struggled to keep my party fed. But real life family dinners? They're gone. I remember not knowing what to do, both in the game and in life. The uncertainty of the game was thrilling. The uncertainty of reality, horrifying.

We're living now in a time of great uncertainty, where we watch possibilities close even as we know, deep down, that the world can be something different, something more. It makes sense that we ruminate on paths we didn't fully explore, on memories long evaporated, on games we loved that enriched our lives.

I'm glad The Seventh Link existed. I'm glad its ideas were cast into the world, even if they've been completely lost to time. It was a salve for me back then, something beautiful created by people at a time where I mostly recall people being ugly and inflicting harm. And it's memory is a warm glow to remind me:

In times of darkness, it is all the more important to remember the lights that have been shining along the way. And if there have been some then, there can be again.

I have a kinda, sorta similar set of memories and feelings about Battletech: The Crecent Hawk's Inception. But, that's vastly less obscure.

A buddy of mine saw this article, worked some internet magic, and reached out to let me know that apparently you can access this game through emulators! Wild.

Maybe nitpicky, but I believe CocoMax 3 was some software for the color computer. I think you really meant ‘Coco 3’ which is shorthand for the Tandy Color Computer 3.

A physical copy of this game is hard to find! The MAME emulator is pretty good. It can be a little tricky to get going, but there is at least one series of videos on YouTube that I found really helpful back when I was spending time on that.

On a different note this article was posted while I was in the midst of something and it hit hard, in a good way, so thank you for that.