Black Book transcends the deck builder genre as it explores a system of magic that is far deeper than a list of cool powers on a timer. Unlike magic systems in other games, the magic in Black Book is replete with a sense of danger. Wielders exist outside societal norms, straddling the line between necessary and distrusted. From the pages of the titular Black Book, protection spells can also bring woe, while the darkest powers can also be a balm.

Magic has always sparked my imagination. My earliest D&D characters were bladesingers, psionics, and pure magic-users. When I first played Quest for Glory, I was drawn to the Mage. There's something undeniably appealing about having access to a secret, powerful talent, but it was the otherworldly quality of magic that drew me in, intoxicating me with the promise that maybe—just maybe—there's something more, hidden from view, just beyond reach. 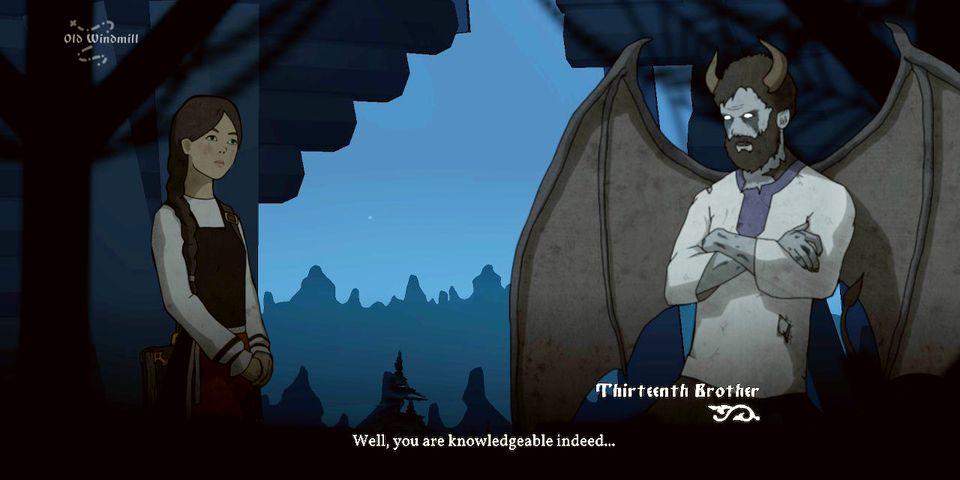 The best magic is subversive; it isn't something you should be doing. An artist employing their eye for color with no financial purpose subverts the capitalistic society in an expression of visual magic. Yet, casting the same talent into an advertising agency, and the magic vanishes into the maw of bottom lines and cost-benefit analyses.

Video games tend to represent magic as an occupation equivalent to other classes, a style-wrapper for unique abilities. In most games, a sorcerer's spell isn't mechanically much different than a fighter's talent or a barbarian's berserker rage. Black Book understands that magic is art, firmly rooted in mystery, subversion, and creative play. Players must build spell phrases, blending and merging pages from the book to create unique sentences. While the core mechanics of damage, buffs, and debuffs are all present, the framing is unique, providing an exhilarating feeling of transgression throughout the narrative.

In the opening moments, your character sells their soul to Satan to become a witch, so they can find answers to the questions surrounding their fiancé's apparent suicide. Suddenly, they must balance the dangerous, socially rejected world of the koldun with the Christian world of late 1800s Russia.

The masterstroke is how these two worlds—the mundane and supernatural—interact. As a witch, you become an emissary, understanding both worlds in a profound way. Like an artist, you can perceive something true and universal, giving it expression in a way that can help or harm those around you. You are simultaneously set apart from the world and more profoundly enveloped in it.

While playing, I remembered years ago, seeing my generally-unhappy father become transported while playing the bass. As a film-to-transfer engineer, he often worked to exhaustion just to survive and spend his time doing other things. But when he jammed, it was magic—I never saw him, or any other adult, as happy as in those moments. Even in my childhood innocence, I recognized that I was witnessing a true expression of something powerful, dangerous, and healing, something simultaneously deeply desired and yet undesirable to the world.

Black Book might begin with a soul sold for power, but it understands that the same power can also save a soul. But it's not the magic within that makes one person special. Everyone walks around with the capacity for magic, no matter how beat down they are by the unhappiness of modern life. The true question is how we choose to manifest our magic while existing in a society that would prefer we bury it deep inside. We must each open the pages of our own magical tomes and choose the phrases that determine how we balance the mystical and the mundane, how we answer a simple, yet critical question.

What spell will you cast today?

Ive been keeping my eye on this game! Thanks for the write up!

Lost in the woods

Nice! You are in for a treat. Thank you for reading <3.

The best way to play, in my opinion, is using the Russian language with English subtitles (The English VO didn't do it for me, but the Russian sounds fantastic.)

Great read! I've been keen to pick up Black Book since playing the demo earlier this year. It's currently heavily discounted on the Epic Store (with the £/$10 off voucher) so I'll likely pick it up there.

The demo was a lot of fun, definitely got me interested in checking out the larger game. May look into this one after the holidays.