We're halfway through the season! Time for some awards.

Best team: Uhhh, the Cards? The Bucs? Maybe the Titans (who beat the Bills, Chiefs, Colts and Rams in back-to-back-to-back-to-back weeks)? Everyone has the Cards atop their power rankings, but they're the Cardinals and the jury's still out. The Bucs are the Bucs -- pretty good but not murdering people except for crap teams. The only thing that's clear is that there's no dominant team (yet) this year.

Worst team: It ain't the Jags, believe it or not. It's either the Lions (who are due for a W) or the Texans (who haven't won since beating the Jags in Week 1).

Best rookie QB: The numbers seem to point to McCorkle, but he's boring and he's an ass for trying to twist Brian Burns' foot off his ankle. So it's either Jaguar Jesus or Justin Fields, I guess.

Speaking of McCorkle, Panthers HC Matt Rhule recently said that McCorkle is going to be a good pro for a good long time. Because Rhule knows so much about QBs, it's quite possible that McCorkle will show up at your house next week with your DoorDash order.

Biggest on-field disappointment: Patrick Mahomes. Turns out he has a little HEY DARNOLD in him.

Biggest off-field disappointment: Kaaron Rodgers for reasons. You could argue that this should be former Raiders WR Henry Ruggs, but I had no expectations for him and therefore wasn't disappointed by his actions. Enraged and saddened, yes, but not disappointed.

Other superlatives: This is the reader response portion of our program. If you want to pump up other players on other teams at other positions *and* you know how GWJ comments work, have at it.

WHO WAS THE BETTER JOSH ALLEN IN WEEK 9?

Why, Josh Allen, of course!

So which Josh Allen was better?

STAT OF THE WEEK

When Steelers DL Cameron Heyward picked off Bears QB Justin Fields on Monday night, it set a record for least amount of air time on an interception in the Next Gen Stats era (ie since 2016) -- 0.1 seconds. (source)

It beat a record that had stood for a day. On Sunday afternoon, the Patriots' Jamie Collins picked off a HEY DARNOLD pass that was in the air for just 0.17 seconds.

PFF's O-line rankings. Of course it does. I just didn't see it until this week.

Stele mentioned this in the Week 9 thread, but Cots 45, Jets 30 was a Scorigami. Hard to believe that there are still unique scores to be scored, but we're at #1069 and counting. 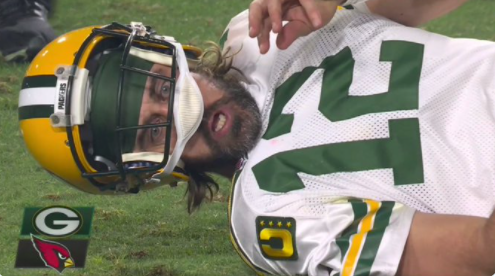 PANTHERS PLAY OF THE WEEK

Here's a look at what Darnold's seeing in the All-22:

(h/t to Julian Edelman for this one)

And here's the Panthers' new backup QB now that Darnold's on IR:

Oh, lord. The worst thing is Shaq Thompson has claimed No. 7, so Barkley's wearing No. 17. That's Jake Delhomme's old number. That's a travesty and will not stand.

Courtesy of ESPN this week:

Biggest gainer: Falcons +7 to 18th?!? (I watched them play the Panthers, and I'm here to tell you ATL isn't better than no 14 other damn teams in this league)

More or less (and good luck figuring out the AFC WC standings):

Sunday early: Bills at Jets, Buccaneers at Footballers, Falcons at Cowboys, Saints at Titans, Jaguars at Colts, Lions at Steelers, Browns at Patriots

Oh thank god Manningcast is on for this particular MNF.

Approve of any and all Kathryn Hahn, but needs more WandaVision.

My superlative would be Worst Attempt At Even Pretending To Be A Journalist for the stuffed suit who goes by the name "Adam Schefter".

Speaking of superlatives, Browns @ Patriots might be the game with the fewest running backs. Everyone is either injured, concussed, or on COVID protocol.

Holy snap, the Chiefs OL is ranked second overall by PFF. Mahomes really is Favre. Such fun! But such ouchie!

Enix. You are so good at this.

Russell Wilson arises from his gwave this weekend! He put out some hype video of him returning and a 45th President of the United States-level aggrandizing statement from his Hollywood doctor saying, "I've never had a patient be so dedicated to his recovery regime - it is AMAZING!"

The team will definitely be improved with him back...but for entertainment value and/or loving the team, the guy is just too much. Like, deeply, deeply insecure, right? Am I the only one thinking this?

Welcome to the Lamar for MVP club.

Getting his number retired Sat at Louisville. No more #8 ever.

Haha some video discussion of those MVP odds.

And his numbers are looking better than 2019, MVP year.

And a bit longer, 6 minutes on why Lamar is the MVP right now

Welcome to the Lamar for MVP club.

Getting his number retired Sat at Louisville. No more #8 ever.

Haha some video discussion of those MVP odds.

And his numbers are looking better than 2019, MVP year.

And a bit longer, 6 minutes on why Lamar is the MVP right now

Even Mark Hamill is upset because of QAaron.

Even Mark Hamill is upset because of QAaron.

At least he picked the worst Star Wars movie to promote.

I think the power rankings are going to be skewed by the strength of remaining schedules. The Titans, for instance, face I think one team with a record over .500 for the remainder of the regular season. And they face the Texans twice who may as well be tanking for whatever reason. It is difficult to see them (or any serious team facing the same remaining schedule) losing more than two games in that lineup. They could literally take Ambien before every game and finish with four losses.

The Chiefs, in sharp contrast, are facing a murderer's row of nasty teams between now and January. They aren't playing particularly well for sure, but they may end up under .500 for the year and it be unrepresentative of their play or coaching quality.

The team will definitely be improved with him back...but for entertainment value and/or loving the team, the guy is just too much. Like, deeply, deeply insecure, right? Am I the only one thinking this?

You're certainly not the only one. There was a show on local sports radio, a few weeks ago, where they were talking about it. It was after there was buzz about him playing imaginary football pre-game.

I thought the OBJ sweep stakes would be quick. Apparently he's 'taking some time' to think it over.

Rodgers said he wanted to be an ambassador and more involved in player decisions. Davante already started campaigning via social media.

I'm indifferent about OBJ as he's injured and hasn't exactly been elite for awhile. That said if it costs next to nothing and he doesn't blow up the locker room (could it even get more dramatic?) then why not. If Adams goes down the team would take a massive hit so why not take a chance on a wildcard. So ya time for Rodgers to prove he can be the LeBron of the NFL and assist in recruitment. That said I'm not even sure if that's really working out for LeBron much.

"When Steelers DL Cameron Heyward picked off Bears QB Justin Fields on Monday night, it set a record for least amount of air time on an interception in the Next Gen Stats era (ie since 2016) -- 0.1 seconds. "

That looked weird in the youtube vid so I found a slowmo of that one. I'm not sure the air time record should count. It first hits him right away (in the helmet) but it bounces off another player then back into his hands. Impressive play nonetheless.

Here is the Collins one for comparison.

On one hand, PJ Walker playing QB brings a smile to my face. It's like Parks & Rec (one of the best shows ever, hence the Kathryn Hahn GIFs), but 10 times funnier and live.

On the other, I want to remember 2015 Cam, not a potentially broken down Cam behind a broken-down O line that's worse than anything he has ever played behind. The Panthers are playing the Cards this week, which reminds me of the 2015 NFC championship game, which is maybe the best Panthers game I've ever watched.

On the third hand (yes, I'm a mutant with multiple hands), I want Cam to come back and kick ass.

This is starting to feel like the Jimmy Clausen/Matt Moore/Brian St. Pierre season of 2010 except that there isn't a Cam Newton out there in the 2022 draft.

No, but there's a Cam Newton out there in free agency available to sign right now!

This will be interesting or great or awful or who the hell knows.

On the fifth hand:

My best dream and worst nightmare all in one tweet

So is it going to be the Carolina SamNewtons or CamDarnolds??

Well at least Cam got vaccinated back in October.

Well at least Cam got vaccinated back in October.

Who knew back then that by November, Cam's vaccination skepticism would look downright quaint in the wake of another QB going full Q-Karen, and that QB not being Kirk Cousins (or Brady)?

Dammit, I was excited for Carolina fans to see him show them up, but if i have to endure this font this may just be my last NFL thread.

I hope Cam does well, both because I've always liked him, and it'll screw up Carolina's draft position. Win-win, I say.

A quick trip down Statistical Lane:

* Cam completed 67 percent of his passes for ~1,900 yards with 15 passing TDs, 4 rushing TDs and 4 INTs. CMC was in his second season, DJ Moore was a rookie, and Greg Olsen was still there (though he missed four games early). Cam's other top receivers that season were Devin Funchess (out of the league essentially after 2018, Jarius Wright (out of the league after '19) and Curtis Samuel (second season; now with WFT, but barely).

And then TJ Watt cheap-shotted Cam's throwing shoulder. Then the Bucs stepped on his left foot. Then Cam got Covid. Then the Patriots drafted McCorkle. And now here we are.

If the Panthers get 2015 Cam, I'd be thrilled (and so would MMD until the Panthers beat his Bucs in the playoffs).

If the Panthers get early-season 2018 Cam, most folks would be pretty happy. (I know I would; the start of the 2018 season was great, and if you look back at the threads in here I was probably predicting a long Carolina playoff run.)

If the Panthers get 2020 Patriots Cam, the Start Derek Anderson Fan Club will be loud and proud. That's my biggest fear, tbh.

So much drama. So little time to prepare for it all. I honestly never thought this would happen.

If the Panthers get 2015 Cam, I'd be thrilled (and so would MMD until the Panthers beat his Bucs in the playoffs).