Just a random check in to see how many games are sitting fully installed on your PC right now.

Bonus points* for how many you've actually played vs installed and just sitting there.

I was thinking of starting exactly this kind of thread a day or two ago. Kudos, Budo.

I'll make it fun and put up some screenshots, for roasting and/or toasting purposes. 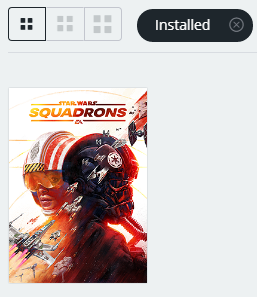 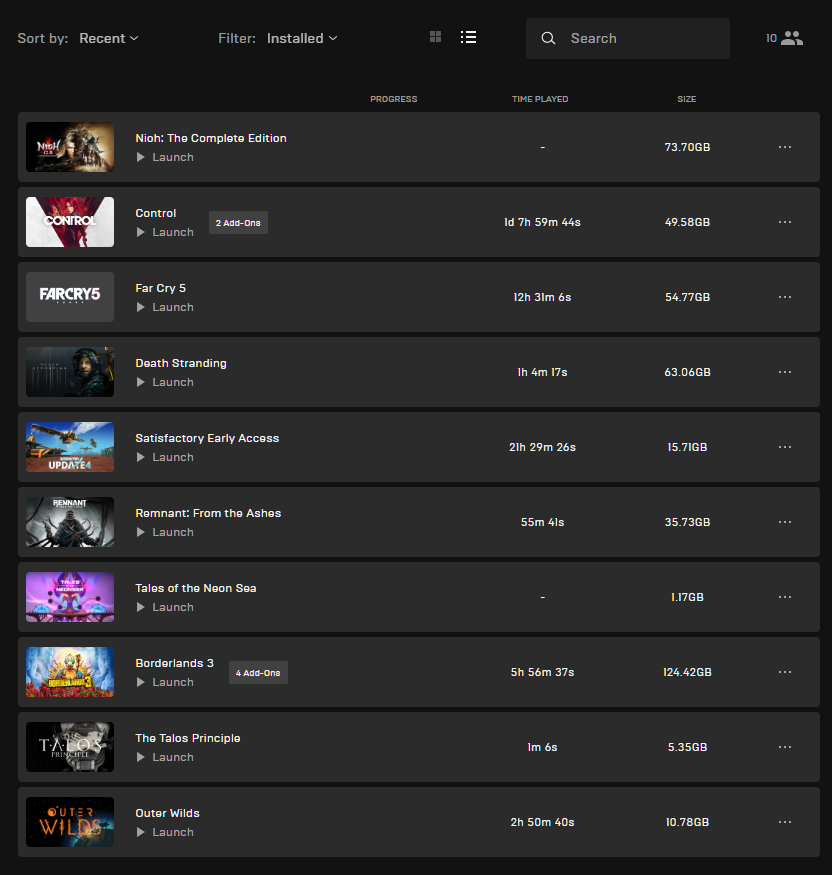 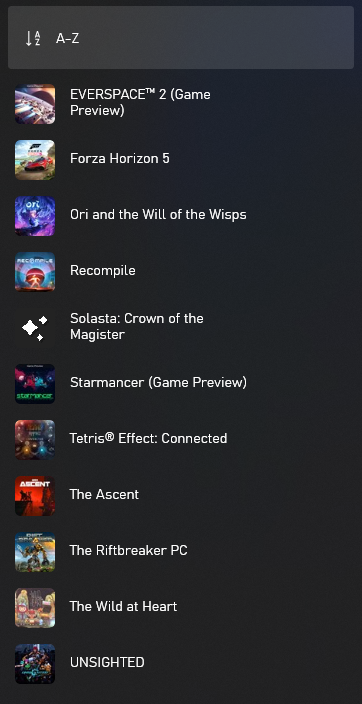 And what I've been playing the most of, lately:

I have a problem. And big hard-drives.

I plead the fifth.

I estimate I've played a notable amount of 2/3 of my installed titles.

A nice even 20. Not too bad for not having a PC I can game on, two old @$$ platforms that have been updated, and a Macbook!

Edit: I probably have many more games that I have started, put down, and need to get back to that I deleted to make room on the hard drives, but that's a different thread.

Eleima
Posted: October 26, 11:05 AM
I find your lack of tag disturbing

Well that depends, am I counting on my desktop or my laptop?

probably about ten on my laptop, and at least I uninstall games I’ve finished playing, but… a lot. The answer is a lot, when it comes to my desktop. I need to remember to make an exact tally, but it’s pretty much exactly the list of unplayed games in my Backlog.

There's some that are not tied to a particular storefront too, so probably add another 5 - 10 to that.

I don't have a huge amount of storage space I generally have a habit of deleting games immediately after finishing, unless I like them enough to want to keep re-visiting them, so I've actually played a reasonable amount of these. Still feel a bit guilty that there's so many that are "played-but-only-barely".

I got a new laptop recently with a 512G hard drive. That has helped limit rampant installations. I think I’m at about a dozen, and Binding of Isaac is currently eating almost all my gaming tunes.

I had way more than that a few weeks ago, almost ran out of hard drive space, and just uninstalled pretty much everything, so now it's more reasonable:
Steam: 8 (+ 2 demos)
Epic: 3
Ubi: 1
Others: 3

Nothing on GoG, and I don't have Origin installed.

How many stars are there in the sky?

36, and that just about fills this 1TB NVMe. I've been meaning to add another...

A little over two hundred.

Basically as many as the assortment of drives will hold - I start uninstalling when space on any of the drives drops below about 10% (or when I decide I'm definitely not gonna be playing that game again).

Most have been played, with some speculative installs. Something like 20 are perma-installs

I've been pretty good on this front due to a variety of limitations like having a single 1TB HDD, wanting to keep the hard drive as clean as possible and a lack of bandwidth to spread my love across more than a handful of games. I've also been pretty good about keeping to a rule of: if I install something, I must also remove something.

Right now I have ~40 games installed:
6 MMOs (I only play 1 or 2, I dabble in the others)
2 Total Wars (I average about 4-5 installed)
2 Paradox games
4 FPSs
11 strategy games
4 City/base/sandbox/planet builders
8 RPGs (I'm including all 3 Mass Effects in this one)
...and 14 of these games are completely unplayed.

I'm not going to manually count stuff, but the currently installed list is 123 games on Steam, about a dozen on Epic, and 50-ish things from other places (GOG, itch.io, indie devs, FFXIV, Elite: Dangerous, visual novels...)

Also, how should I count the multiple copies of Dwarf Fortress?

Most of the games are on the smaller side, but I've got a bunch of spare storage in this machine anyway (because it was originally the freelancing workstation) so why not fill it up?

I've played them, though the amount varies significantly.

I would like to answer the question incorrectly? Not sure I have it in me to count them all across steam/epic/battlenet/ubi/itch/xbox/ps4/switch. I do have it in me to give you the approximate storage size of all my games across various platforms in gigs:
PC: 900
Switch: 128
Xbox S: 500
PS4: 500

I have 14 games installed on my PC and that seems hugely excessive. I keep them broken up into 4 categories.

I'll probably knock this number down again over the next day or so. Pillars, Risk of Rain, No Man's Sky, and Subnautica can all be uninstalled.

Edit: Uninstalled Pillars and Risk of Rain. So I now have 12 games installed.

Why NOT have that many games installed?

If i need drive space, I can uninstall in seconds.

Actual total as of this evening:

Why NOT have that many games installed?

If i need drive space, I can uninstall in seconds.

I am also of this school. I have a couple of high-capacity spinning drives that I use for games exclusively. Since most of what I play is not-terribly-demanding stuff, it works out well.

Eleima
Posted: October 28, 9:31 AM
I find your lack of tag disturbing

So I haven't checked on my rig itself, but I have a system. In Steam, I tag my games with "Current", "To Play", "Played", "Good Games", "Very Good Games", "Favorites" and "Perfect" (all cheevos unlocked). Typically, I have all my "Current" and "To Play" Games installed, which would amount to 83 games on Steam. Add to that 9 games on Origin (four Mass Effect games, five if you count the LE, and four Dragon Age games, yes I'm counting Awakening as a standalone expansion). Probably one or two on Epic that I can't even recall right now. And there's a dozen pre-Steam era games here and there, Pharaoh, Heroes of Might and Magic 4, Jones in the Fast Lane and Dune on my laptop, more still on my PC. Oh and I forgot UPlay where I have Assassin's Creed Odyssey waiting for me!

That means I probably have over a hundred games installed at any given time. I have a dedicated SSD for games on my rig. Sure, I don't need to have them installed. But they're there, ready to go as soon as I'm able to dedicate some time to them.

Definitely in the "if the mood strikes I don't want any hurdles" camp for rationalization.

As my Internet speeds have improved over the years I have slowly gotten better about that. Stationary bits cost next to nothing and I've already paid the download cost. *Shrug* That said I have recently used discovery tools to identify the largest abusers of my space and nuked them. Looking at you Call of Duty Mumble mumble, Rocket League, and Star Citizen.

And I use the same rationale as the past couple of posts. I have two 2TB hard drives in my computer that are available for games only. There are some nights where friends will want to play a MP game on a random night, but I will otherwise not play it by myself too often. It's easier to have something installed and ready to go then to have to wait for a 50+ gig download every time.

Under 20, I only ever get into one game at a time but regularly download 5 or 6 I might get into soon. That's where I am now, tinkering with a couple to see which one I get into.

I also have a small stack of around 15 physical copies games (the Zero Escape series, Madden, World Rally Championship 5, Atelier Sophie, Metal Gear Solid, a Final Fantasy or two). Most are still in their cellophane packaging.

Given the way I actually use my Vita (it's my take-away-on-holiday console), I doubt that I'll ever play most of the games I've bought.