While I wasn't looking for LotR style continuity, I was shocked at the complete lack of connection. I was hoping they would have pulled it together at the end with Michael having the mask on his head, but no.

That is one crazy graphic.

I tried to look at the Halloween movies, sans 3, as dopes trying to figure out why Michael Myers is killing people and making sh*t up for that movie arc, and them being wrong. But that hurt my brain.

That is one crazy graphic.

That's not even the only one I found!

Here's one arranged more as a which ones did you like and do you want similar ones/choose-your-own-adventure: 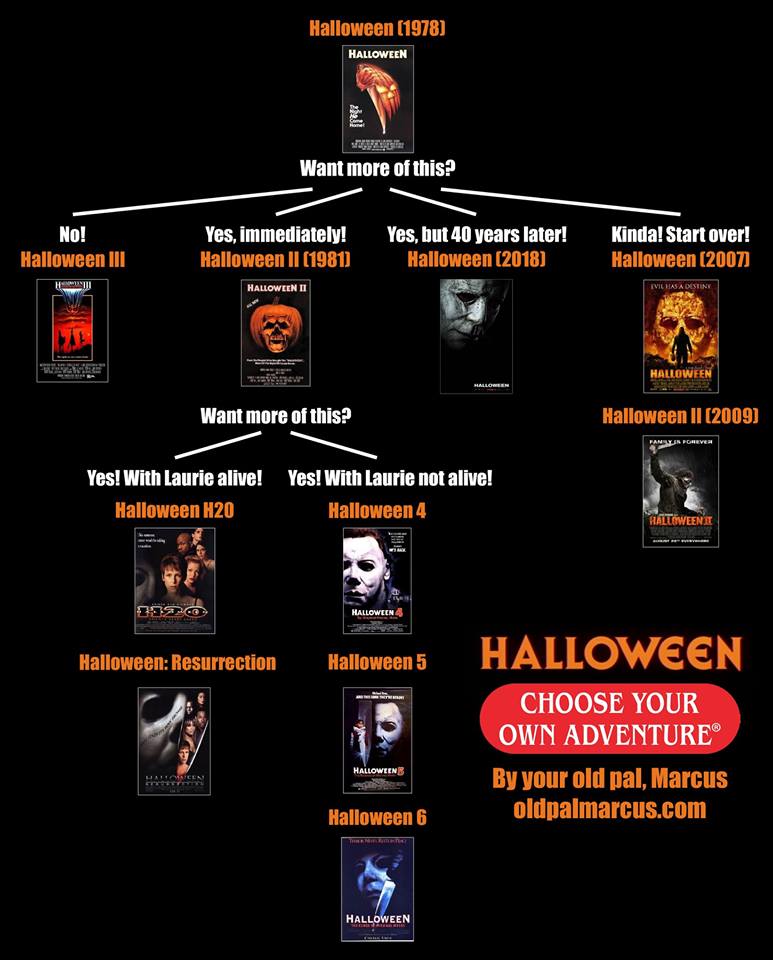 I thought the other one was more informative though.

I watched when it aired a show called Werewolf. A guy gets bit by a werewolf and after that kind of wanders the Earth looking for the head werewolf. If I recall correctly if the head wolf dies everyone he turned goes back to normal. The show was a werewolf version of The Incredible Hulk. The transformations were really good for the time. I think it only lasted one season.

I give it 8 you aint going to find it anywhere because I checked so ignore this out of 10. Well legally that is.

Hah that graphic gets the point across too. Can see the flow from one to the other at least.

Pretty sure I've still only seen the original Halloween. And I am probably ok with that still.

Am really, really hoping all the "good old boys" get violently taken out by Michael.

Halloween 4 is pretty good. Stand out performance from an 11 year old Danielle Harris. Halloween 5 is tied for the worst Halloween movie ever. Pay special attention to the stupid clown noises when the two cops are on screen.

My wife and I watched The Night House (starring Rebecca Hall) last week, and loved it.

Last night, we watched an Argentinian movie called Terrified (Aterrados in the original Spanish version) and loved it as well.

All I know about The Night House is the poster. I like the actress. I shall add it to my list of movies to track down. Terrified is on Netflix I think. I’ll give it a go.

I tried Pentagram on Netflix as it had an intriguing premise but it has that ‘no we don’t need more actors, I can get my mates to play some of the parts’ feel that often comes with horror movies you’ve never hear of on streaming services (Prime in particular seems to have become the home for many such ‘home brew’ horror movies.)

We like Rebecca Hall as well. We try to check out everything she does.

It definitely did. The way it’s shot in a semi documentary style is incredibly effective.

Nice! I wouldn't mind watching it again myself.

I watched Jeepers Creepers. It had some memorable scenes.

Like when the creature is suddenly on top of the police car behind the brother and sister.

We did find it much more of a frustrating watch than I remember. A lot of standing or sitting slack jawed rather than running or driving like hell in the opposite direction. Also, there are several graphic gear box torturing scenes. Listener discretion is advised.

Early in the film a rust old truck is menacing the couple in their vintage car as it tries to pass/drive the couple off the road. My friend turned to me and said, “It’s just like the A259 isn’t it?”

I watched it about 10 years ago, and I remember liking it more than I thought I would. There is a sequel coming out:

Oh nice. I hope they get it right. Done well I think it has a ton of potential. The best part of the first movie is learning about the antagonist and the odd things he can do (I shall say no more.) Hopefully they can recapture some of that.

Talking about movies that surprised me pleasantly, if you haven't seen Trick'r'Treat, I would suggest you check it out. I've watched it several times and I always enjoy it.

And talking about enjoying B movies, my wife and I just watched Pet Sematary 2, hahaha. Yes, the one from the early 90s with Edward Furlong and Clancy Brown. What a ride that was!

Trick r Treat is one of those that I try to watch every Halloween. It is just so fun.

I see Sam, the little guy from that movie all over the place. I am astonished they haven't made a sequel.

This weeks movie night movie was The Descent. It was my third time watching it and somehow it worked on me a lot more this time. I’ve noticed before that watching with other people can heighten your reaction to and enjoyment of a film. The creatures, especially the faces, are absolutely superb. Possibly the best I’ve ever seen.

Interestingly I wasn’t sure if we were going to get the US ending or the UK version. We got the Uk version which this time round felt a bit artificial. I think I prefer the US ending now.

In the US version the main character escapes in the UK version she appears to escape but then wakes up to find she’s in a small chamber presumably with no hope of a way out.

The film has quite a few ‘cheap’ jump scares such as birds suddenly taking flight or a party member suddenly being next to someone else and talking loudly. Those always feel artificial. I’m not a fan of jump scares particularly but I think they have a place as part of the horror movie mix. Done well and built up to properly they can be fun when watching with someone else.

The Descent is one of my favorite horror films. Just think it gets everything right. Particularly being trapped underground and that fear of being in tight places.

The sequel not so good. Didn’t really add anything to the first film. Would have liked if they uncovered more about the origin of the creatures.

So far that’s the only Neil Marshall film I’ve really liked. Always have high hopes when watching another one of his films but they fall flat for me.

Great White on Shudder is a by the numbers shark attack movie. It’s watchable but if you’ve seen any of those movies before you’ve seen this one. Does not bring anything new to the table.

Oh interesting. I didn’t have an eye on Great White in the hopes it might be good. I’ll probably watch it anyway if it isn’t actively awful.

I enjoyed the second Descent movie I think. I don’t remember a lot about it. There is a third one in the works apparently.

The Descent is one of my favorite horror films. Just think it gets everything right. Particularly being trapped underground and that fear of being in tight places.

The sequel not so good. Didn’t really add anything to the first film. Would have liked if they uncovered more about the origin of the creatures.

So far that’s the only Neil Marshall film I’ve really liked. Always have high hopes when watching another one of his films but they fall flat for me.

I'm amazed that he didn't do better stuff.

Think he mainly went into a lot of tv after Centurion

I actually watch The Exorcist last night. It's one of those movies I knew so much about I felt like I'd effectively experienced it but I'm glad I actually sat down and watched it through. At first it was just interesting rather than gripping but as it went on the tension built and built. Of course I knew a lot about the last third of the film and had seen many clips so the impact was hugely lessened. I can imagine it would have been pretty mind-blowing to see it in the cinema when it first came out if you didn't know how far the possession was going to go. The slow build and sadness in the characters lives was very effective. I felt so much for Regan and her mother as they went through the procedures required to rule out physical or psychological causes.

It looks like this weeks movie night will be The Descent 2.