For all three China, USA and Australia, to break the world record.
For Ledecky to go from 4th to second and just a touch off first. I want to see the split for her leg. It has got to be nuts. The replay showed the speed of the swimmers on the last laps. She was off the charts and you were waiting for her to run out of gas and she never did!

Re: Your spoiler -- I'm pretty sure they said on the broadcast that her split was like 1:53.7, which was a decent amount faster than she went in the main event, though just having a relay start accounts for a big chunk of that.

Yeah nearly 2 seconds faster. The start might be half of that. Suffice to say if she swam that fast in the single event, would have got a medal at least.

British rowing fails to win a gold for the first time since 1980, even at the truely dreadful 1996 Olympics had Redgrave.

Did win 2 medals in the BMX today though so that was great. And both their stories are great, (Kye Whyte basially showed up one day at BMX track that had been built in Peckham to see what the crack was) . 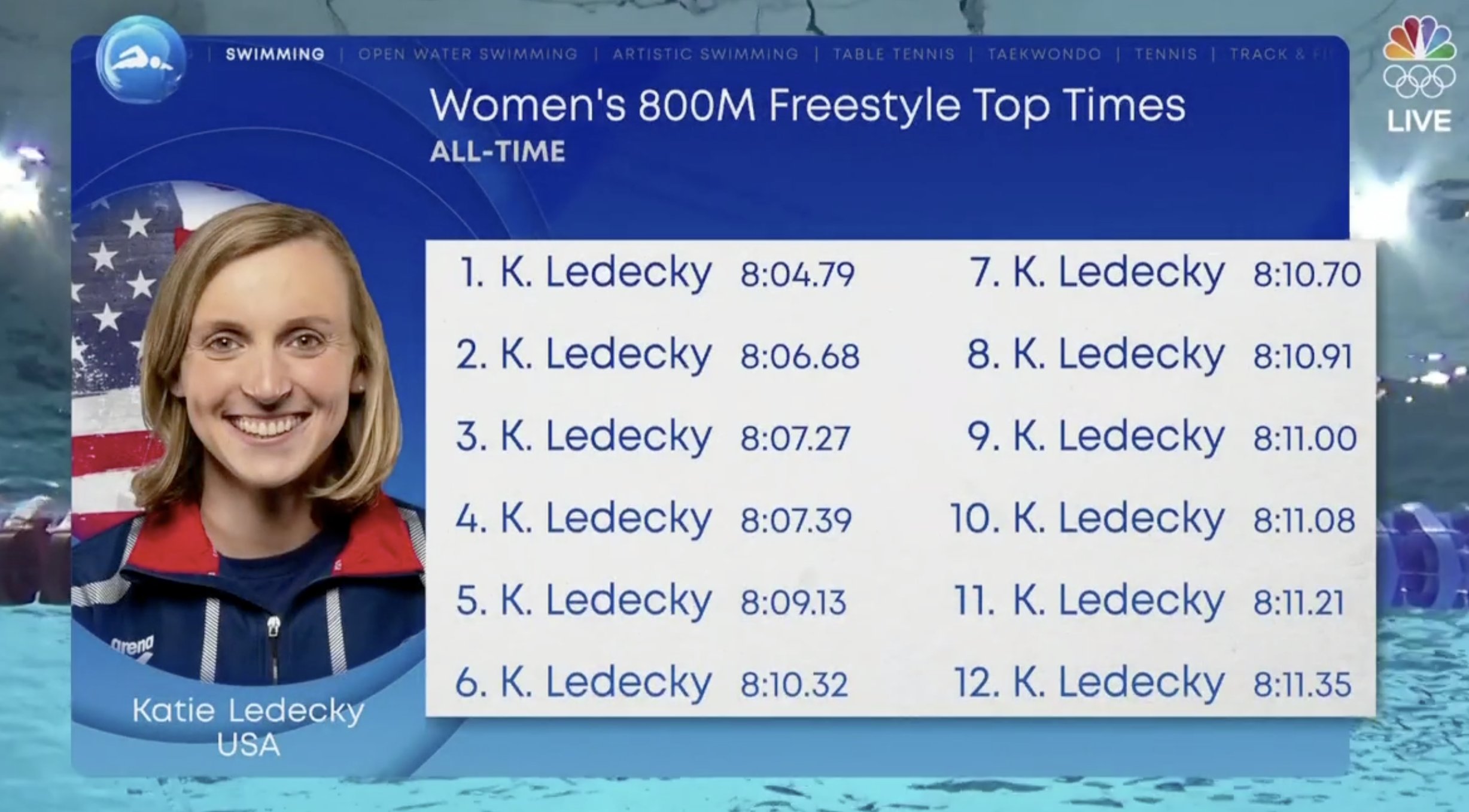 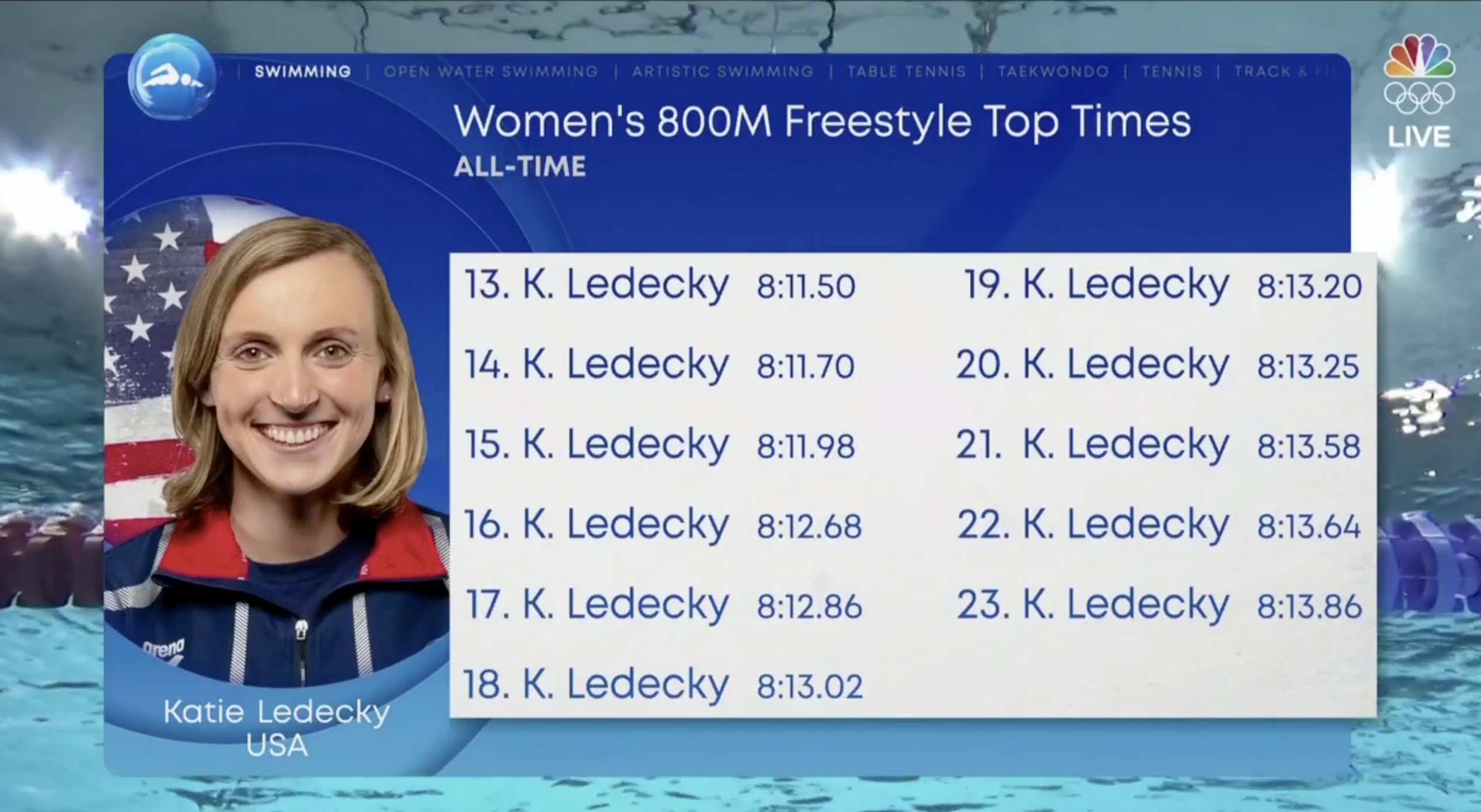 She's something special. It's been fun to watch this week

LOL, like, I know I shouldn't expect better from U.S. media, but I literally had to go to the Olympics website to find out Poland actually won the inaugural 4x400 mixed medley, and not simply that the U.S. finished 3rd.

Wtef did I just watch?!

Got to admire this. She hit the deck trying to do a trick that has never been done before by a women, then instead of playing it safe, decided to go boom or bust, and she flew.

I may not like the Olympics, but the athletes know how to get me.

I may not like the Olympics, but the athletes know how to get me.

That was f*cking beautiful. It's not dusty those are man tears in my man eyes.

There are so many of those.
Like an Ecuadorean woman won the deadlift gold for the country's first women's medal.
The men's shotput final was pretty epic too.

USA women in a tight one with France right now.

Time difference has pretty much curtailed how much I've watched live.

Great way to start the week waking up to see Canada advancing to the womans soccer final.

Really happy for Sinclair to get a shot at gold and hope Canada wins.

I hope Canada wins too but Sweden has been absolutely dominant.

Nice to see that the US women's volleyball rallied to win their last game despite losing their star player who was absolutely on fire when she went down. Here's hoping for a medal if its not too much to wish for gold.

Meh. Nice to win taking no shots on goal and getting a questionable PK. I'll be rooting against Canada Thursday, thanks.

billt721
Posted: August 2, 9:21 PM
These pretzels are making me thirsty

I have to say that Youtube TV has been a fantastic way to watch these Olympics. The east coast prime time NBC feed is available before the local feed starts, which is nice for people like me who go to bed pretty early. Then if there's a specific event that I want to watch, it's easy enough to search for it and find the "DVR" video of it.

Plus, the fact that both my wife and I bailed from social media several years ago means that the delays don't impact us.

I was going to post earlier that the thing everyone seems to be able to agree upon in these Olympics is that NBC has done an absolute dogsh*t job.

I was going to post earlier that the thing everyone seems to be able to agree upon in these Olympics is that NBC has done an absolute dogsh*t job.

That is every Olympics since I've been watching.

billt721
Posted: August 3, 2:10 AM
These pretzels are making me thirsty

I think they're .... basically fine? Like, it's kind of an impossible job. There are too many sports running simultaneous events to be able to show all of them, and then people lose their sh*t if the bigger events aren't shown live, which is hard because of, among other things, timezones and the multiple-events-at-once thing. Then you local affiliate wants to show their own stuff as well, so that's just going to mean that different timeslots for everyone will be unavailable.

Part of me would like to see the prime-time show spend some more time on the more niche events, but at the same time they give a taste of that stuff and I can seek out the expanded footage if I want it. And I do always enjoy the little human interest segments on the athletes -- especially the ones from other countries who I've definitely never heard of and won't ever hear about again.

The one thing I absolutely hate is the post-event athlete interviews. They're universally bad, owing mostly to the fact that the person asking the questions doesn't actually know anything about the sport, and so they just ask the most generic, schlocky questions imaginable. I can't skip that stuff fast enough.

I haven't bothered to check the official site, so maybe they're already doing this, but one thing that might be interesting would be to run feeds of all sports without commentary, so if you like to be bored out of your mind and want to spend 8 hours watching swimming prelims, you can. They did some of that in 2016, but I can't imagine it's popular with anyone outside of very small groups of people. I watched the 2016 swimming prelims because I still had tenuous connections with a few people who were competing (trained with their older sibling -- that sort of thing), but absent that personal draw, I'd rather just see the semis and finals.

They do even better than no commentary... they stick the worst announcers possible on non-USA events.

Seriously, I watched the replay of Spain-Slovenia from Sunday. Luka vs Rubio + the Gasol brothers! 7 NBA players between the two teams. And I swear I've heard better commentary for NCAA lower division games. Not sure who the hell it was but he sounded like he was bored, mispronounced names, and was not excited even when Luka was throwing alley-oops.

Despite that, it was a fantastic game with runs in the 2nd half that saw both teams lead by 6 or 8 at different times, and Luka closed it out to upset Spain.

The only good thing NBC is doing is on their NBC Sports app, if you have a cable login, you can basically watch anything, anytime.

It's sometimes confusing because they will show LIVE as anything that is on their channels. Which can trick you into thinking some replay they are showing during primetime is actually a live event.

But if you drill down to the individual sport, you can see live, upcoming, and watch full replays. And the live view has some DVR capability to pause or rewind, much like Fox Sports streaming app. This feature is still lacking from ESPN streaming, despite their ESPN3 streaming being around for 15 years now.

billt721
Posted: August 3, 3:50 AM
These pretzels are making me thirsty

Shouldn't be too hard.... I grew up swimming in Seattle and swam in college there, too.

For more recent connections, my neighbor was the head surfing judge this year. I just seen this afternoon that he's back -- I'll have to ask how his experience was. I know he was really looking forward to it pre-covid, when he would have been able to take his family and they could get tickets to any event they wanted, but it ended up just being any other competition -- probably worse, really, because of all the restrictions that were (rightly) put on what he could do in his off time and the fact that he basically had to be out of there shortly after surfing ended.

Shouldn't be too hard.... I grew up swimming in Seattle and swam in college there, too.

If you're making us guess...

But NBC also owns peacock and I should be able to easily stream every damn part of the Olympics and it's really f*cking difficult to watch or figure out what to watch and what comes after. It's a sh*t show to be honest. Streaming days are here why is watching the Olympics hard?