Villarreal should have won their game at Old Trafford by two or three goals, but instead they got Ronaldo'd in Fergie Time.

Gracious. If you need a goal, there's really no-one better than Ronaldo, eh?

I'd like to say it's sad to see both Real and Barca getting beaten in the Champions League, but it isn't, so I won't.

Ahem... It's Sporting CP. Don't say that in front of him if he's that much of a fan. If they go ballistics with people calling the team Sporting Lisbon, I can only imagine the drama of using FC.

As for not being happy... Maybe he's of 2 minds about it. We have a lot of fans (me included) that overcome their rivalry and mostly, generally support the success of the Portuguese teams. It's all about the ranking, baby.

Happy for the win against Barça, but they're really not that good anymore. I'm sure the game against Bayern will be a very different story, as in a horror story.

Oops! Kidding aside, I think his hate for Benfica trumps all.

On this day in football history.

The future of football is going to include so much stupid sh*t.

Today, he had said as if he hadn't been saying so for weeks, and that very morning, LaLiga revealed the salary limits imposed on Spanish clubs this season. The amount, in other words, a club can spend on the costs of the footballing side of its business, across transfer fees, salaries, and so on, if they wish to sign players. The fundamental basis, sadly, upon which any club is built.

That Barcelona are in crisis is no surprise, even though some like to say it's not really a crisis, accusing the rest of hamming it up. Well, they are on the edge of getting knocked out of the Champions League -- which they absolutely can't afford to happen -- and were forced to push their best ever player out of the club*... and then get rid of their next best forward as well, for free. Which sounds quite crisis-y.

They're effectively bankrupt and there is a reason the summer went the way it did. Barcelona president Joan Laporta had already said that the total debt was €1.3bn, and that they had lost over €450m in the last year alone. But still, seen like this -- delivered by the league itself, held up in contrast to other clubs -- it was startling. A long list of figures that broker no argument and offer no way out, including Barcelona's, a figure seven times lower than Madrid's. Seven times lower than where they used to be: two summers ago, Barcelona's limit was €671m.

And nor is it just Madrid. A few days prior, Koeman said that finishing in the "high positions" in La Liga would be a "success." If, in the end, it comes down to money -- and it so often does -- he's right. It is not just Madrid who can spend more on their squad than Barcelona can. It's Sevilla and Atletico Madrid and Villarreal and Real Sociedad and Athletic Bilbao. They're not even that far ahead of Espanyol. At under €100m, there is not a club in the Premier League that can't spend more.

Also, congrats to Sparta Prague for being exactly who you think they are.

Saw the Barcelona new spending cap this week also and had a chuckle.

Does it even make sense though? I understand a league wanting to put some financial guard rails up but if Barca manage themselves into bankruptcy so be it. 100m~ seems very aggressive.

I think we have covered it in these threads previously. The Y2Y shortfalls can look massive but considering the majority of expenses are wages it's not like a club can't get back to the positive.

The Spanish league + Barcelona both being dysfunctional though makes for good pop corn.

Arsenal definitely stole a point that match. Brighton were the better team. Need to do better.

Barca currently losing 2-0 to Atleti in the second half just to keep their stellar week going.

Can they afford to sack Koeman?

Watched the Atlético-Barca match and Madrid just completely outclassed them. Barca barely got a sniff and the defending was dreadful.

Unless they're in danger of relegation I think the smart move for Barca is to just stand pat, try to muddle through with Koeman until his contract is up, and hope you can develop your young players to be ready when all your Dead Money players start coming off the books.

Barca currently losing 2-0 to Atleti in the second half just to keep their stellar week going.

Can they afford to sack Koeman?

Ditching Koeman would cost Barcelona €12m in severance pay when the club has yet to pay Quique Setién or Ernesto Valverde. The league does not allow clubs to benefit from unilateral sackings, so any salary saved as a result of firing him without an agreement cannot be taken off the limit, freed up to sign another manager. But because the league don't want clubs to be stuck (or managers too), there is special dispensation to bring in a new coach. Beyond the salary limit, beyond the 1:4 option, Barcelona can spend €3.91m on their new manager because the rules state that as an emergency measure, you can spend 4% of your limit.

I’m watching our PLAYERS MOP THE FIELD to continue the game. I’ve never seen anything like it. Official statement from the Co-chairman: “We need to get out of this f*cking league.” @Wrexham_AFC 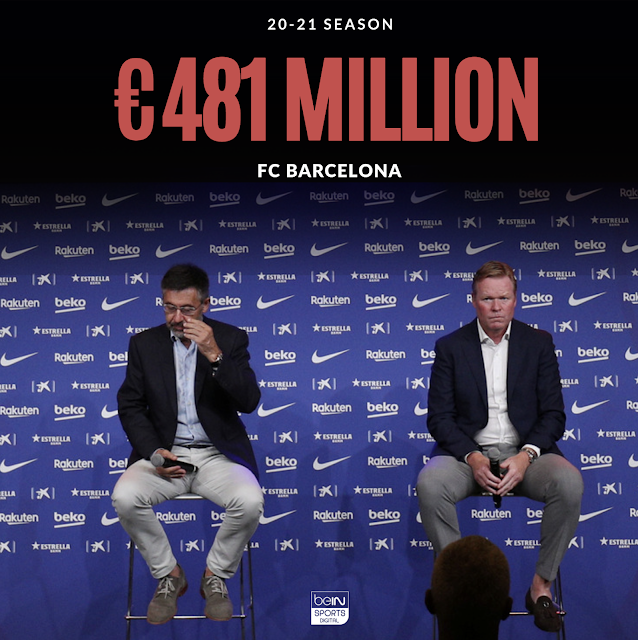 Barcelona presented their final numbers for their 2020/21 season and their debt (for this season alone) is up to 481M EUROS. About $554.81M. Experts are saying it may take them 5 years to get even with all the debts Bartomeu's presidency left the club.

Still have really mixed feelings about this thing.

Barca must be drooling over all the big wage players they'll probably be able to get rid of to Newcastle now.

There is a stench of hypocrisy in these parts at the moment. And some tangible excitement too.

In for an interesting couple of years I think. I better take the bairn to a game soon before I can’t get in.

Newcastle is going to be nursing a serious hangover tomorrow morning. That’s all I’m saying.

There was a dude dressing up as MBS at the party outside SJP and it made me feel kind of sick.

I can get feeling joyous and not having the trepedition I do because at last the club will be more than a 17th place Sports Direct billboard, but it's still a billboard for something much worse. Celebrate the club without celebrating somebody who had a journalist murdered and dismembered.

In happier news... Mexico fans whistling their team off at the half at the Azteca after Canada came back to tie the match. Lozano and Ochoa have been good for Mexico, everybody else not so much, and Canada's played them at least even so far in my opinion.

And a draw at the Azteca for the first time since 1980 (and our first goal there since then too).

3rd place in the table with our two most difficult matches out of the way. Canada has a chance to go to Qatar...

Apparently it's the first time a team has taken an away point off of Mexico AND the USA in a round of World Cup Qualifying.

I can get feeling joyous and not having the trepedition I do because at last the club will be more than a 17th place Sports Direct billboard, but it's still a billboard for something much worse. Celebrate the club without celebrating somebody who had a journalist murdered and dismembered.

There's not a fan of a team in the world - with the possible exceptions of Man City and PSG - who wouldn't be extremely excited and pleased if this was happening to their club. And you've got the added factor of the unhappiness at all those Mike Ashley years as well. I've read some extremely sanctimonious claptrap in the papers this morning it must be said.

My friends up here who've basically been boycotting a team they've supported since they were old enough to know what football is are overjoyed, and to be honest I can't blame them. They are fully aware of the reputation of who's bought them, but as they as all say why are they any better or worse than many other owners of many other teams? The underlying feeling is that they are being picked on by a tone deaf, Southern media who wouldn't be bringing half as much attention to this if it were someone like Crystal Palace or Brentford being bought out.

Having lived here for over a decade now, I don't think they are wrong either.

Can I still find it revolting and depressing that being owned by a Bond supervillain is now a requisite for winning anything important? And still be upset about how easily "fans" rationalize murder, slavery and whatnot if it benefits their precious club? Just checking, because the new normal seems to be an everlasting race to the bottom. We'll just fix it with a ten second clip of players saying "human rights are neat" in twelve European languages before and after each game.

Can I still find it revolting and depressing that being owned by a Bond supervillain is now a requisite for winning anything important?

“I received a higher offer for the club than the one that I accepted,” Ashley said. “It was from another reputable bidder who made a credible case … But I felt the bid that we accepted from the current new owners would deliver the best for Newcastle United. Money wasn’t my only consideration.”

So it looks like Stavro Blofeld's bid was rejected after all.

Can I still find it revolting and depressing that being owned by a Bond supervillain is now a requisite for winning anything important? And still be upset about how easily "fans" rationalize murder, slavery and whatnot if it benefits their precious club? Just checking, because the new normal seems to be an everlasting race to the bottom. We'll just fix it with a ten second clip of players saying "human rights are neat" in twelve European languages before and after each game.

Being a supervillain isn't a pre-requisite, having unbelievable piles of money is.

This is what I mean about stench of hypocrisy - and that's from clubs that themselves have some very questionable owners.

the boat about ownership sailed the day Jack Walker took over Blackburn Rovers at the birth of the premiership era. Don't get me wrong, people should be cross about this, but that anger needs to be directed at the Authorities, not the fans. I've read some absolute rubbish about Newcastle and it's fans today that is an utter pile of drivel.

this, however, is class.

The first half SUCKED, but the last 30-35 minutes of the final today were quite entertaining.