Justin Houston goes to the Ravens for a song.

So glad he's not on the Steelers.

Edit: Also, give credit where credit is due.

Browns extend Nick Chubb three years, $36 mil with $20 guaranteed. I'm happy with this. Guy is one of the best in the league, if not the best.

In other news, the Raiders recent 1st round picks are now second stringers. This is shocking to no one.

Browns extend Nick Chubb three years, $36 mil with $20 guaranteed. I'm happy with this. Guy is one of the best in the league, if not the best.

That’s an astonishingly good deal. 8 running backs will be paid more than Chubb over the next 4 years. Will any be better? Doubt it.

Even though I need to call a doctor if it lasts more than six hours, I’m going to have a Chubb for the next three years.

It took a day, but someone figured out how to do that joke.

TheGameguru
Posted: August 1, 4:54 PM
Here to save you all

The only tier Wentz belongs on is the Ginger Jesus always get hurt don’t need no vaccine tier.

In other news, the Raiders recent 1st round picks are now second stringers. This is shocking to no one.

Hopefully Jacksonville’s Josh Allen bounces back from last year’s injury and sacks QBs again so that I can trash talk the Clelin Ferrell pick some more.

I guess I still can. Allen had more sacks than Ferrell last year (2.5 vs. 2.0) despite suffering a knee injury in week 4 that eventually shut him down for the rest of the year. To be fair, Ferrell ended up on IR with a shoulder injury, but that happened in week 13.

Imagine having Allen and Brian Burns on the draft board and taking Ferrell. Hell, and Montez Sweat on the board too. I know for certain that Bosa - Allen - Burns was my 1-2-3 for edge rushers, and I’m pretty sure I had Sweat above Ferrell and Rashan Gary.

Have to give the Raiders credit for scoring Maxx Crosby in round 2 though. 17 sacks in 2 years, currently leading the 2019 edge rusher class, though that lead was greatly assisted by injuries to Bosa and Allen last year. Still a good score, which really makes reaching for Ferrell look all that much worse.

EDIT: Speaking of the Raiders:

Uh oh, people are noticing Derek Carr’s playing too well to scapegoat anymore. 67 TDs vs. 27 INTs during the Gruden era. 3 straight years over 4000 passing yards, passer ratings of 94, 100, and 101. Kinda hard to pin the team’s middling records on him. 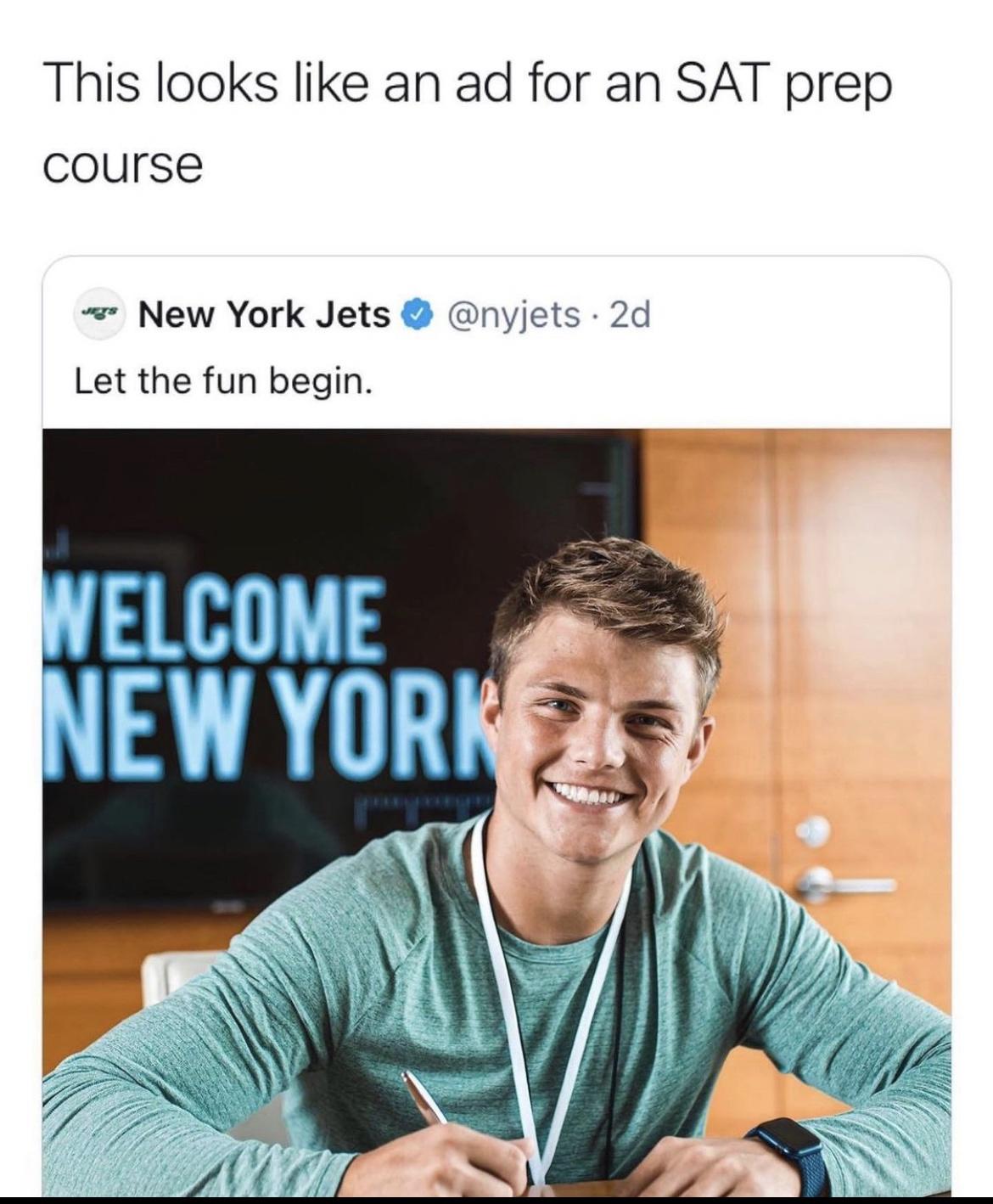 So glad he's not on the Steelers.

When we dropped DeCastro we picked up Melvin Gordon (and Trai Turner).

In other exciting camp news, we're down 7 of 15 healthy linemen, including all 5 starters. Will be interesting to see how well this cobbled together O-Line holds up.

Sunday: Carson Wentz is going to rest his hurt foot and hope it gets better

Today: Wentz will have surgery and be out for the next month or three.

I have no love or hate for Wentz or the Colts. I was just very curious how the Wentz/Frank Reich pairing might work (or not). I do love a redemption story, however.

Meanwhile, the Colts signed QB Brett Hundley, formerly of the Packers, Seahawks and Cardinals. PFR says the last time he threw more than 10 passes in an NFL game was Week 16 of the 2017 season.

Hundley? Would have been better off with the BOAT.

Mike Tanier's latest Walkthrough on FO looks at the Bears' QB situation, then has a bit about every team.

Houston Texans: Say your brother-in-law made a series of silly, disastrous trades, then left your fantasy league after a bitter separation from your sister. So you handed his team to your neighbor, who claimed to know a lot about football but spent all his time trying to lure your friends and family into his quasi-religious pyramid scheme. So you handed the team to your nephew, who knows the game but has such a toxic personal life that half your league unfriended him on Facebook in self-defense. So finally you set the team to autodraft, and a computer filled out the roster with the sort of mediocre veterans who cling to the bottom of fantasy cheat sheets. That team is now the Houston Texans.

I mean, I quoted that in a post on FO, but that is such a good paragraph it should be repeated everywhere.

So a Panthers WR took a vicious hit to the head in practice today and had to be taken off the field on a stretcher.

The DB who hit him? Thrown out of practice and cut from the team before lunch.

Matt Stafford hit his surgically repaired thumb on a helmet in practice. That happened yesterday, and the Rams are being cagey about his status as he sat out practice today, saying only that they will take things "one day at a time".

EDIT: X-rays were negative. Thumb is swollen and he is expected to miss a few days, according to Rapoport.

There may be a reason for the change. PFT says, "The criminal investigation has progressed to the point where, we’re told, Watson’s camp is bracing for an eventual grand jury proceeding."

So, any hope of making this go away by settling the civil suits may be disappearing.

That said, someone is going to have to do something eventually. Both the team and the league have just kicked this can down the road. They can't just hold Watson out of practice forever.

Boy howdy did he.

Unrelated: Colts all-everything OG Quenton Nelson will miss a month or three because he's having the same foot surgery Wentz is.

Guess someone offered the Colts got a two-for-one surgery special?

Danny Dimes ended up at the bottom of the pile, apparently.

Daniel Jones should thank his lucky stars Kelvin Benjamin was off the team by this point.

According to SI, Travis Etienne has been “uncoverable” in training camp.

Not sure if this is telling us more about the abilities of Etienne, or the Jaguars linebackers and slot corners (Myles Jack can cover, but the rest, ehhh…), but I am still 100% here for the team’s use of him as a pass catcher first and foremost. Still one of the only things I think Urban Meyer is doing right.

Looks like the WTFs crept out of the cellar after a bunch of their players got placed on COVID list over the weekend. They've gone from 60% at start of camp to 84% after the weekend.

I have enjoyed Zimmer basically calling his players total f*cking idiots. If Covid doesn't kill Cousins, I wouldn't be surprised if Zimmer does.

Yes, Zimmer has definitely earned a moratorium on me making fun of his must-run-every-play old school mentality. Sometimes old school isn't the worst thing in the world...

Looks like the WTFs crept out of the cellar after a bunch of their players got placed on COVID list over the weekend. They've gone from 60% at start of camp to 84% after the weekend.

It only took Ron Rivera to explicitly remind everyone that he doesn't have the strongest immune system and they were risking killing him.

Kinda surprised that the Union hasn't just straight sided with the NFL on this besides unions never allowing to agree with management 'because'.

I've already seen a couple of articles pretty much allude to the fact that teams might cut fringe players who don't vaccinate because why risk it? Of course they won't say that's the reason but good luck proving otherwise.

I think once the vaccines get full FDA approval, vaccination should be made mandatory for all NFL players.

Granted, I think it already should be, but you can argue that the FDA approval is a threshold that needs to be met in order to make that kind of edict.

But once that threshold is indeed met, there's no excuse remaining.

I'd also bet enough of the NFLPA would get on-board for a vaccine mandate, as most players have clearly gotten it, and had no ill effects. Having the NFLPA come out in lockstep with the owners and say "No, seriously, dumbasses, get the @#$!! shot" would be nice to see.

TheGameguru
Posted: August 4, 3:35 AM
Here to save you all