is this really the offseason to be taunting a Bucs fan?

It's easy to sh*t talk when you have the advantage. True pros can do it from the bottom of the standings.

My teams are gonna draft a pair of transcendent QB prospects that set them up for the next 20 years, while Tampa will be headed to the dumpster in about another year after Arians calls it quits again, and Brady retires to a leisurely life of children mouth-kissing and occasional posts on Trump's floundering new social media site.

Maybe but that will be after a superbowl or two - when was the last time Jag fan or 49er fan can say that?

(Just trying to help MMD out)

Two headlines in a row on PFT:

Enjoy your 1st round kicker and 5th round replacement DT. Get wrecked nerd.

Looking forward to trying out a UDFA kicker and trading him for a fifth round pick to use on obtaining a Pro Bowl DT in a trade.

is this really the offseason to be taunting a Bucs fan?

It's easy to sh*t talk when you have the advantage. True pros can do it from the bottom of the standings.

My teams are gonna draft a pair of transcendent QB prospects that set them up for the next 20 years, while Tampa will be headed to the dumpster in about another year after Arians calls it quits again, and Brady retires to a leisurely life of children mouth-kissing and occasional posts on Trump's floundering new social media site.

Well, you should clearly be a pro at this by now.

While there's no doubt the 49ers have an opportunity here based on some recent success and a lack of apparent head injuries in the people making personnel decisions, the Jaguars now have a perfect opportunity to become even more legendary as a failed franchise, as they're going to destroy Trevor Lawrence. Happening to be actually worse than the Jets the one year is the best thing the franchise has done in years, and having Lawrence doesn't make up for the draft history, bad free agent decisions, and Former All-NFC West Bad Decision Maker front office/coaching staff that's going to continue to lead the team into the swamps outside Jacksonville.

The Jaguars have not been a bad team because they did not have Trevor Lawrence, and they will not suddenly become a good team because of Trevor Lawrence. They're not even lucky enough to be the Colts with Andrew Luck falling into their lap with the remnants of a good team around them that had an awful year and fell into 1-15; the Jaguars are legitimately 1-15, and the best thing that's happened to the franchise in the last few years is a guy with a cool mustache and both a propensity for throwing the ball well once he's down 20 points and a solid history of nailing the hot moms who hang out at the Applebee's near the stadium.

The Bucs are a historically awful franchise who had some glory years nearly 20 years ago and lucked into another ring thanks to a few solid drafts stocking the roster enough that the GOAT was willing to come to town and drag a bunch of great free agents along on his coattails, and, when he retires, the Bucs will go back to being the Bucs, and they'll be terrible.

But, at least, they won't be the Jaguars.

All I heard was

legendary (...) Trevor Lawrence (...) best thing the franchise has done in years (...) lead the team into (...) nailing the hot moms who hang out at the Applebee's near the stadium. 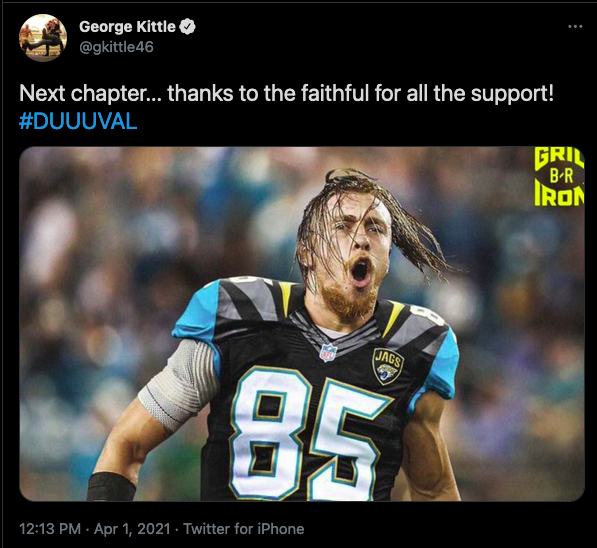 Nah, this was the best prank.

Matt Walldman's RSP is out and the thing I'm most interested in is WHO IN THE HECK ARE THE NINERS MOVING UP TO TAKE?!?

Lance operated a pro-style offense and makes pre-snap adjustments to coverage. Though Lance is characterized as a check-down artist, his offense is built predominantly on the tight end and running back as his first and second reads. Not only is he executing as asked, but the prominent number of excellent vertical throws Lance makes are frequently third and fourth reads—a hidden value of Lance’s game that is erroneously perceived as a weakness.
This accounts for Lance’s decision-making that many see on a superficial level. It also accounts for below-average yardage production from
Lance when compared to spread-offense quarterbacks with glorified hand-offs that count as passing attempts.

Lance may have the best drop-back and play-action game in this class, but he is also a dangerous runner blessed with enough speed to
take the corner on box defenders and some safeties but also the strength to drop his pads and bull through defensive backs and
linebackers. This isn’t what Lance’s future NFL team will want from him, but that physicality extends to his pocket management against
pressure.

Of course Mac Jones is a fit. That's because, as George at PFF puts it: 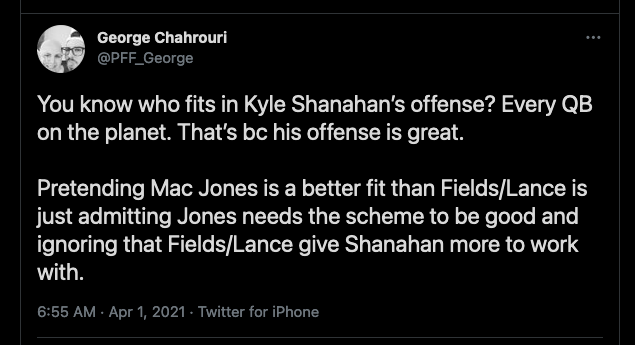 Of course Mac Jones is a fit.

Congrats, Legion, on reaching the "acceptance" phase of grieving in record time!

Niners reportedly put a 1st round pick as the asking price for Garoppolo.

I've become convinced they have every intention of keeping Garoppolo for 2021, unless they get an offer too good to pass up. I think they are determined to not be stuck without a QB again this year, and they value that more than getting Jimmy's cap space back.

By next year, Rosen should be ready to be QB2 (or QB1!) and Jimmy can get moved.

In case anyone cares, Aaron Rodgers is hosting Jeopardy for the next two weeks.

Yeah one of the hosts I've been looking forward to actually. Good reminder.

I skipped the last 2 weeks entirely. 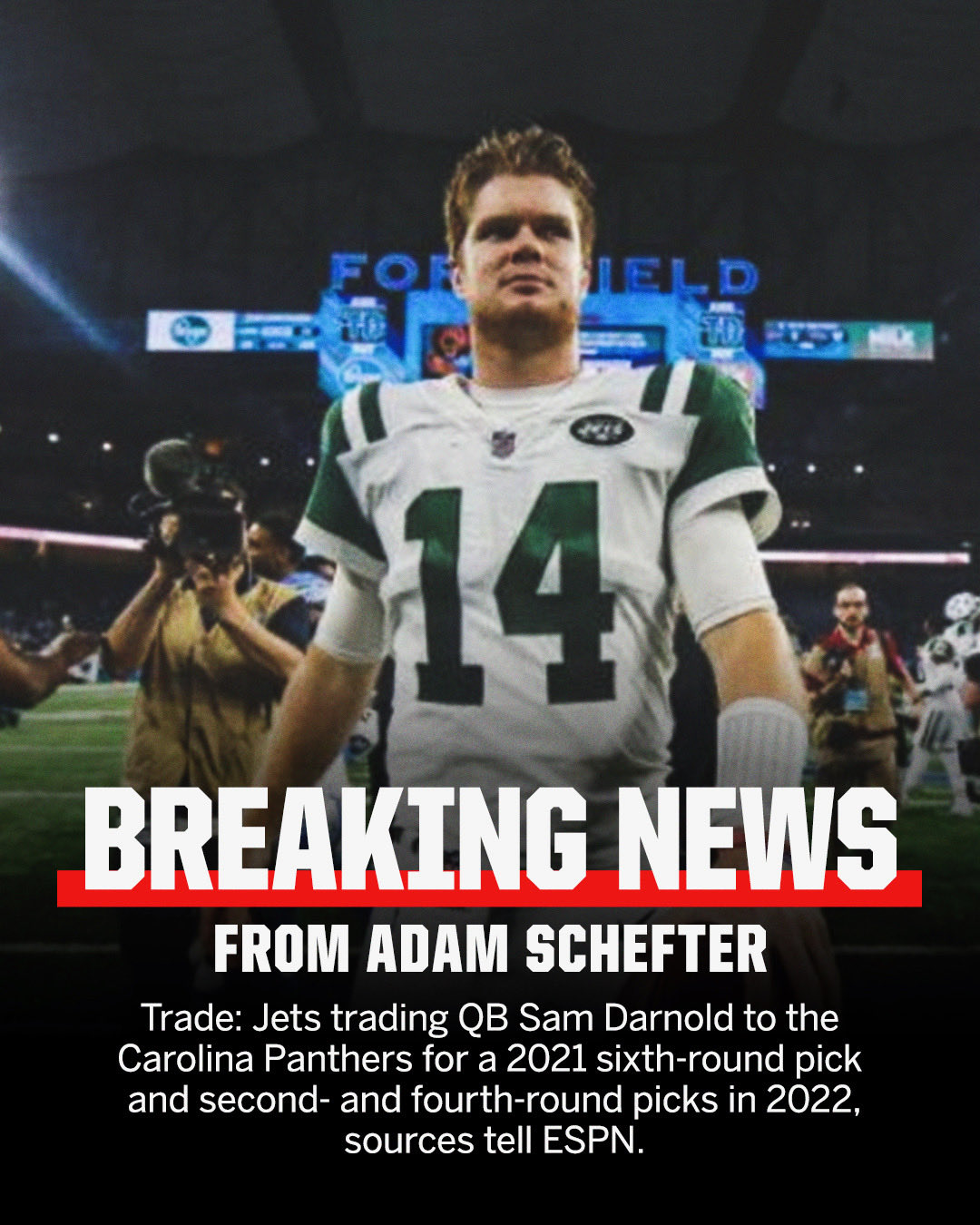 Well that obliterates any question of whether or not the Jets take QB at #2.

The fact I literally laughed out loud when I saw the news is a bad sign or is it a good sign? I can't tell.

Sam Darnold strikes me as a bit of a sensitive boi, so I'm sure things are gonna go swell with him and Matt Rhule.

No words so gifs:

If someone had told me a team had traded Darnold for a 6th this year and a 4th next year and I'd have thought that sounded fair for both teams, but . . . a 2nd next year? With what Darnold has shown so far, with everybody knowing the Jets are taking a QB anyways? Who were the Panthers bidding against?

This has to be to at least a large degree "Well, Tannehill got good once he got away from Gase, so . . ."

Man the Jets are soooo bad. Whatever will those fans do with their T shirts now?

The irony, of course, is that Carolina played its QB search much like Teddy played in 2020:

They took some deep shots early, got desperate, made some bad decisions at the end of the game and took another L.

This has to be to at least a large degree "Well, Tannehill got good once he got away from Gase, so . . ."

To be fair, Tannehill's not the only offensive player to flourish as soon as they got out of the Adam Gase Suppression Field.

I think Darnold has plenty of upside still, but not giving a 2nd, 4th, and 6th for him.

Tannehill cost a 4th (plus Tennessee got a 6th in exchange for a 7th). Nick Foles cost the Bears a 4th. New Orleans originally acquired Teddy B for a 3rd (and also received a 6th in return).

Garoppolo cost the Niners a 2nd. Leaving aside Jimmy's injury issues since then, is anyone really valuing Darnold right now at a higher level than Jimmy when he was finally being wrested away from Belichick after years of teams trying? Have a hard time seeing that.

Josh Rosen was traded for a 2nd and a 5th, and that was with all but one year on his rookie deal still intact. Darnold's entering year 4 of his deal. 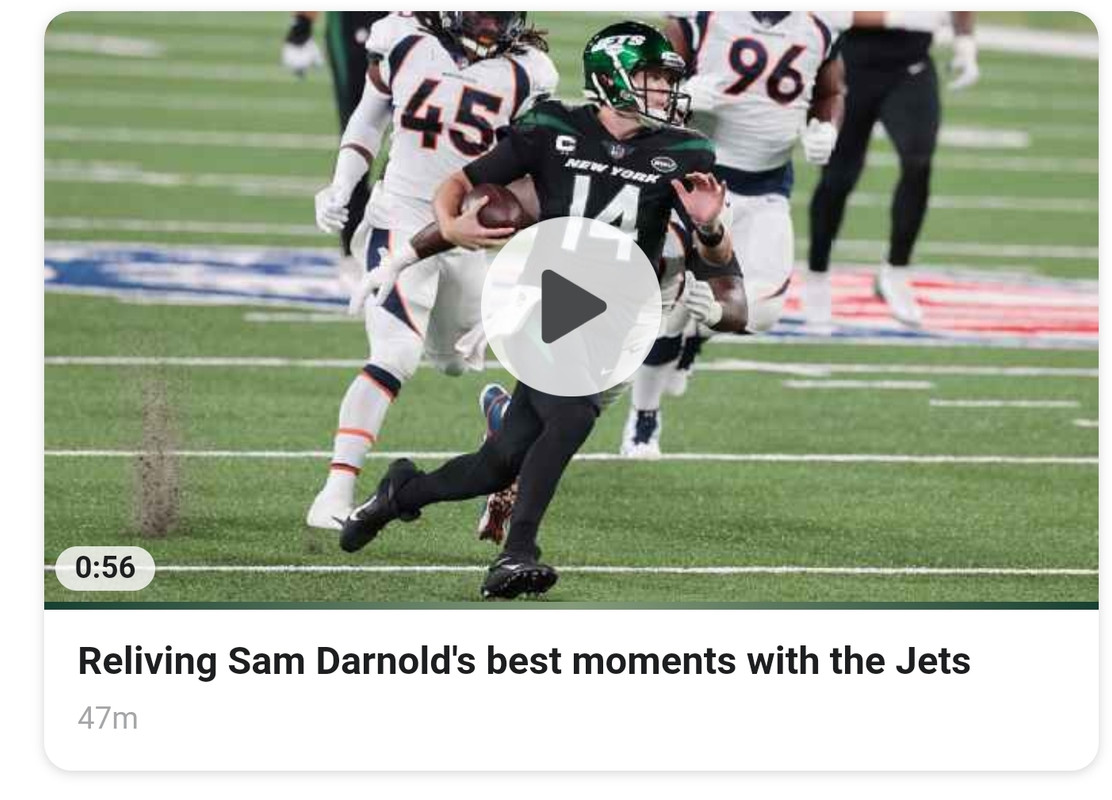 Seems about a minute too long

It didn't take long for that to come up during Aaron Rodgers' run on Jeopardy.

WTH? Jeopardy doesn't come on until 7pm here. Who gets it in the afternoon?