It has been so long since I have posted here.

My boys had discovered Dr. Awkward's Steam account on my laptop and I let them play a bit of Team Fortress 2 and Portal.. That escalated to them wanting gaming computers so they could play stuff like dad. Super bittersweet moment for me because honestly, it was probably the one huge return on investment of changing diapers and sleepless nights Doc wanted, was his boys to game with him.

Fast forward, I bought 2 desktop gaming computers and I bought each boy the same gaming desk Tim had for his computer. It seemed like the most amazing way to try and tie him into all this. Set both computes up with Steam accounts and such and I thought I did well. But one of the computers on Steam will not download (or upload, I dont know what they do) Steam games in any sort of fast fashion. I am talking days to download a game, versus the other one that is quite quick. We have boosted internet because we have many devices connected so i doubt it is the internet speed, but is probably something with Steam as a setting or the computer itself. Or could it be distance from the router?

I dont know much about technology or this stuff, it was always Doc's department for sure. Does anyone have any suggestions, or willing to hop on Team Viewer to check all the settings and such? I have one child who is already disappointed in gaming because he can not do anything on his computer.

Malor
Posted: January 9, 6:36 PM
Discretion is not the better part of

Are they connected wirelessly? If they're on wireless, that might be the issue. Nearly all desktops have Ethernet ports, so if you run an Ethernet wire between the router and each machine, that should fix the Internet problems. (Make sure to turn off the wireless, so you know the Ethernet is actually working.)

If that's absolutely not an option, then A) make sure you've connected any antennas that the motherboards came with. B) Try rotating the antennas 90 degrees, so that they're polarized differently. C) Try rotating one of the antennas on the router to match the PCs; I often put one antenna straight up and one straight out to the side. (this is assuming you have "yagi" antennas, the short stick kind.) As a last resort, you could try moving one PC closer, and see if its behavior changes.

Oh, also try both 2.4GHz and 5GHz radios. 5GHz is much, much faster, but it has relatively poor penetration. 2.4GHz tends to be noisy, overcrowded, and slow, but it penetrates walls much better. (which is a lot of why it's noisy, overcrowded, and slow.) You'll probably find 5GHz to be better anywhere in the same house, but if you've got a really challenging environment, that may not be true.

Ethernet, on the the other hand, is relatively foolproof. And once it works, it will typically keep working as long as the wires aren't damaged, where radio signals can be interfered with by new signals at any time. But you have to run physical wires from the router to the PCs.

If the router and PCs are far apart, and you don't want two wires across the house, you can buy a small network switch, where you run one wire from the router to the switch, and then plug both computers into the switch. You end up with one long wire and two short ones.

Once you prove that this works, if the wire is annoying, you can look into running it in the walls instead; you can get network people to do runs like this for you. It's not real cheap, but it fixes this kind of problem permanently. Or you can do it yourself for a lot less, but this is a giant PITA and I personally avoid doing it whenever possible. (Having two boys to help might make the physical work much easier, however, particularly with the "fishing network wire through narrow remote holes" part.)

Malor's spot on with the more likely issue, but just to cover one other base: Steam has an optional bandwidth limitation setting. It should be disabled on a fresh install, but it's worth checking just to be sure. Steam menu -> Settings -> Downloads -> Limit bandwidth to (unchecked) 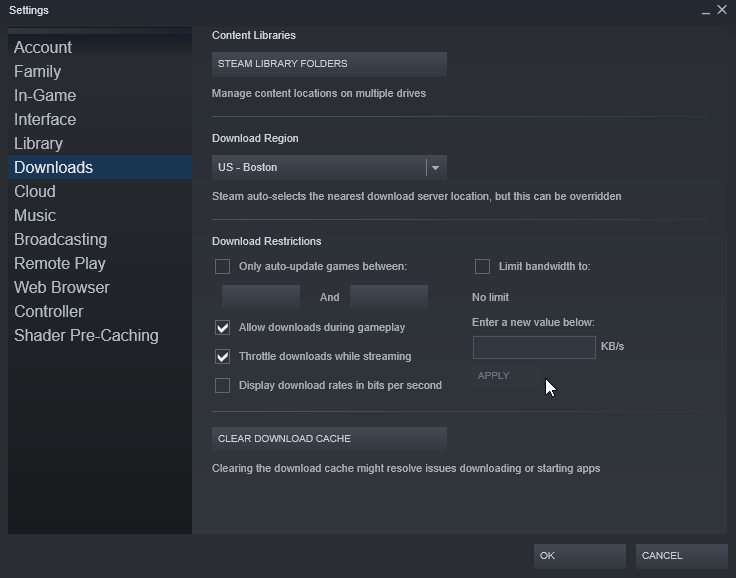 Also make sure you're set to use a geographically local download region, on that same screen.

I would go to speedtest.net and check each PC. See if one is super slow compared to the other. This would tell you if it 's a Steam setting or the PC connection itself.

Yes, check speedtest to see if it is a computer problem or a Steam problem and let us know!

Also, how old are the boys? 5 year olds like different games than 8 or 10 year olds.