Apologies in advance for a suck-tastic Week 10 thread. I was going to do something on all the players flipping and tumbling and hurdling last weekend, but Giphy failed me.

Then I thought about doing midseason awards. But you can find that kind of content all over the interwebs, and we all know who's good (Mahomes, the Steelers, Russell Wilson, Brian Flores, Rodgers, Aaron Donald, Justin Herbert, DK Metcalf, the non-injured version of George Kittle) and who's not (the Jets, Taysom Hill, the NFC East, Antonio Brown, Philip Rivers' defense, Tom Brady on alternating weeks, Covid) and who's worse than Covid (Taysom Hill and the SNF booth crew's irrational love for a guy who is well below average at multiple positions).

While Week 9 did turn out to be a fun week of football — and when is it not, amirite? — we were all once again treated to Jameis eating a Dub on national teevee. It's so stomach-turning that I spoilered it.

I think I need a hug.

A QUICK WORD ABOUT TV RATINGS

Sports Media Watch wrote that the ratings for Sunday night's Saints-Bucs game weren't good. In fact, the Sunday night game "has now averaged a single-digit rating for six straight weeks, the longest such streak since the series moved to NBC in 2006. Viewership has declined for nine of NBC’s ten games this season, with five of the last six down by double-digits."

Well, no, not really. According to the Nielsen ratings for the week of Oct 26, the most-watched TV show with nearly 17M viewers was ... the Sunday night game between the Eagles and Cowboys. NFL programming (games and pre-game shows) held the No. 2, No. 3, No. 4 and No. 10 slots for the week. The Thursday night game that week (FaLOLcons-Panthers) had a higher rating and nearly as many viewers as the deciding Game 6 of the World Freakin' Series.

People still watch the hell outta some football. But folks seem to be watching less sports and definitely less live TV than they used to. Lots of possible reasons for that, or maybe no reasons, or maybe lots of complicated reasons for lower TV viewership overall (fewer younger viewers, folks don't channel surf like they used to, people watch fewer channels).

I have no larger point here. Just noting it for the record.

WEEK 10 SCHEDULE
(with your coverage maps, and note all the 4 p.m. Sunday games)

Thursday (Fox, NFL and Amazon): Colts v Titans. They're both kinda dull, but they're both playoff teams. I'll watch.

Sunday early (all on Fox): Texas-Browns and Bucs-Panthers are the games to watch; Eagles-Giants, Jags-Packers and WFT-Lions are only for those who hate themselves. Also, there are only *five* early games this week.

Sunday late (CBS, 4:05 p.m.): Chargers-Dolphins, Broncos-Raiders and Bills-Cardinals all get that weird 4:05 p.m. start (because of The Masters, as if anyone GAFF about golf). And you know what? Those are three very watchable games.

Sunday night: Ravens-Patriots. Lamar will run and pass for 800 yards, so, yes, watch it. The Patriots D is that bad.

Oh great I get to watch the 49ers on Sunday... what's left of them.

In a just world, Jameis Winston would be throwing to Antonio Brown, while Ben Roethlesberger runs into them with an exploding bus.

You should find a gif of Mina Kimes doing the cam slide.

Watching the 29ers lose to the Packers was, whatever. But Sean Payton deserves to have his team's face punched in by a fully operational 49ers, and it sucks that it won't happen.

This Super Bowl loss hangover is lasting a long ass time for you, eh?

This Super Bowl loss hangover is lasting a long ass time for you, eh?

Not nearly as long as the 2017 AFC Championship Game loss hangover.

I somehow forget, every week, that Phillip Rivers plays for the Colts.

Titans forgot to come back out for the 2nd half apparently?

I somehow forget, every week, that Phillip Rivers plays for the Colts.

That's because the AFC South is the most boring division in football and isn't worth remembering. It's the closest thing the NFL has to relegation.

Worst thing that ever happened to the Jags was the dissolution of the AFC Central.

N.Y. Jets Sued For Millions After Using Unlicensed Cheering Sounds From Other Teams 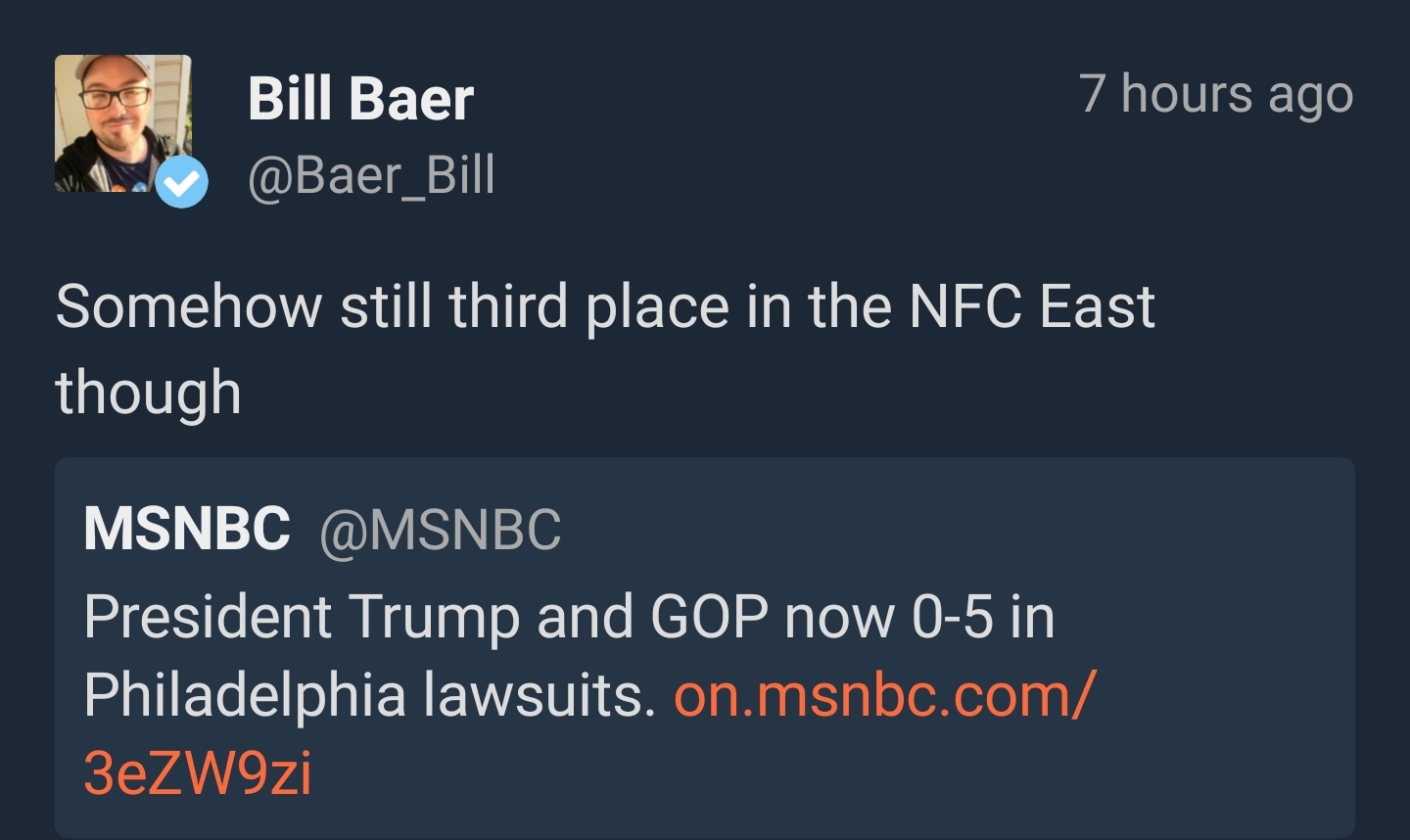 Okay, I'm being hyperbolic, but with this article coming out I think we're looking at the end for him.

It'd be a shame if we kept linking this video of a Jaguar flopping.

Would have been even closer if a phantom holding call didn't turn Jacksonville's last TD into a FG instead. That was the 4 point differential.

Officiating in the Jags games was comical for 2 weeks in a row. One of the most insane was when a Packer batted a pass after interfering with a receiver, and the officials tried to call it as no PI because of a tipped pass (again, the interfering defender is the one who touched the ball, AFTER molesting the receiver). It took a challenge flag and New York booth review to overturn it. Dean Blandino was quite flummoxed by the initial call.

I'm pretty sure the league is sending their bottom-dwelling officiating team to the Jags games, which, I mean, fair...

And then Tampa scored the next 70 points. Whew.

The Packers are beyond frustrating to watch this season.

-14 favorite at home to a 1-7 team. Why not keep things close to the very end. Giving up a punt return TD to a team that is going to struggle to score at all never helps. Davante Adams fumble + Rodgers pick also not normal.

Packers are good enough to win the NFC North (not a compliment). Probably good enough to sneak into the NFC championship game depending on draw and seed. I have 0 faith they compete vs TB, NO or Sea especially if they are away. I'm essentially hoping they end up hosting that game and there's a blizzard.

Yeah. Arizona wants to go to the playoffs I guess.

I'm still confused how he was traded this year. Then I just get sad the Packers didn't get him for the 25 cents on the dollar the Cards gave up.

Yeah, that was a frustratingly winnable game for the Niners.

Oh, and JaMycal Hasty broke his collarbone, because even the practice squad RBs have to die and get replaced on the 2020 49ers.

The power went out in my town during the Browns-Texans. Seems like I could’ve just stared at the off tv in a dark room and seen as entertaining a game.

Yeah, that was a frustratingly winnable game for the Niners.

Oh, and JaMycal Hasty broke his collarbone, because even the practice squad RBs have to die and get replaced on the 2020 49ers.

Karma for how his dad treated his RBs and RG3.

RG3 was Dan Snyder's little Veruca Salt, he had it coming.

Seriously though, ban the entire NFC East from the playoffs.