You won't find any of Lucasarts' trademark humor here (or very little of it). Loom tells a complex story of Bobbin Threadbare, on a quest to discover who his mother is and why his people are vanishing, one by one. To guide him on his quest, the Elders' distaff allow him to perform some sort of magic using musical notes. Firmly rooted in the music of Tchaikovsky's Swan Lake, the game is actually preceded by a 30-minute audio drama (it isn't required to play the game, though).

The main thread is right this way. We'll be playing Loom in November 2020, with an extra month for wiggle room.

Nice! I've installed and have checked to see if it runs on my machine.

If you're playing on Steam, here's a list of keyboard shortcuts:

I love this game, I may actually be in for this.

Nice! I'm excited for this one, as I wonder never able to understand it and play it all the way when I was young(er).

I’ll be in on this one - haven’t played it in years. Tried a few times using a very old copy in ScummVM but it seemed to crash a lot. Will pick up on Steam and try again.

This is another game that I played at a friend's house (same friend that owned Monkey Island, in fact) but I also recall very little other than messing around with the music part. So it'll be fun going through and actually playing it!

Not surprisingly, my Mac refused to run the Steam version of the game. I got around it by installing ScummVM, and running the game from there.

Since there is a decision when you start the game, this info seemed important:

Unlike most adventure games at the time, Loom offers three difficulty settings: Practice, Standard and Expert. In Practice and Standard mode, you can see the scales and notes, while selecting the Expert mode, a distaff with no notes is displayed, and you must play the game by ear. In the original version of the game, the Expert mode featured an extra scene, but this scene was later included in all difficulty settings in later releases.

OK, as my votes always seem to be for the outliers, I thought it was about time I joined in for the pick

I went ahead and purchased the LucasArts Adventure Pack with Loom and other LA classics (I've not played any of them before!). I have the same issue as Aristophan regarding the game not working on my Mac (I thought I'd be ok still being on Mojave OS ¯\_(ツ)_/¯) I'll have to see if I can do the same with ScummVM.

So... hopefully, I'll be along for the ride with Loom, fingers crossed. 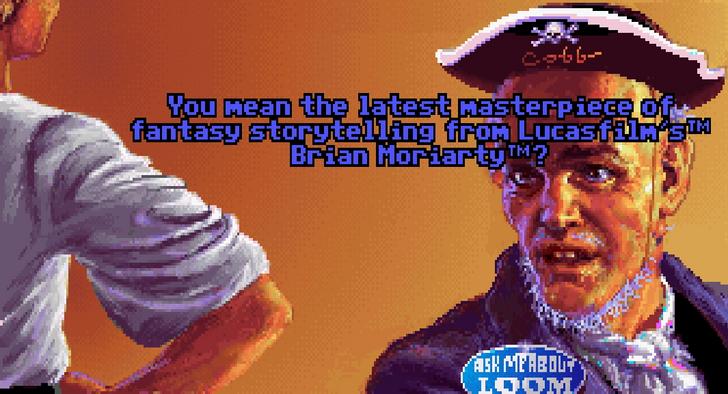 Eleima
Posted: October 30, 9:08 AM
I find your lack of tag disturbing

Wow, it's not even November, and yet y'all are READY for this!!

I love the energy.
Super bummed to hear about the issues with Mac, though.

I did some digging, and the only available option seems to be to run it with ScummVM. There doesn't seem to be an easy fix, and I'm sorry about that. Mac users, let us know how you fare.

I'll be streaming Loom as part of my Extra Life stream. I planned it early in the morning on Saturday, November 7th (Paris time 9:00, EST 3:00 , PST 0:00), in order to kick the day off with something chill, but it'll be available on VOD afterwards.

The good news for Mac users (there's probably just two of us here?) is that it works well using ScummVM, which is easy to use.

That's most excellent news, though I wish the process was less arduous. And thanks, I am too.

I even set up bot commands to send folks back to the GWJ adventure game club main thread.

Using ScummVM I played the opening 20 minutes or so. I remember all the dialogue and the performances. Loom was one of the first CD ROM games I played, back when there were such things as single speed CD ROM drives. The external drive was huge and was sandwiched between the monitor and my pc. No matter, it used CD audio to play all the dialogue and music, so it ran just fine. I probably played the opening many many times.

For those of you who have not played before, the manual included a "Book of Patterns" which names all the drafts in the game, and has other lore.

Eleima
Posted: November 8, 8:41 AM
I find your lack of tag disturbing

I streamed my playthrough yesterday morning!

PSA: trying to be a spoiler-free as possible, be sure to fully investigate the Weavers' island before you leave, and write down all the drafts you come across, because once you reach the other shore, there is no going back.

I got a bit stumped in places, but nothing too serious. It was still a very enjoyable game, and it doesn't take too much of your time (I clocked in under three hours, but I mostly knew what I doing).

I started playing Loom today and I found this page where you can keep track of your drafts.

The Edge of Reality

What a great game, excellent pick!

Eleima
Posted: November 17, 9:08 AM
I find your lack of tag disturbing

Glad you enjoyed it, Glycerine, it’s truly a gem!

I finished up Loom last week, and as always it was a delight. However, one thing I did not remember was how quiet the game was. There is wonderful music and voice acting, but when you are wandering around it was mostly silence. I'm sure that is a relic of it being such an old game.

The only place I really got stuck was

casing the invisibility spell on the tower. That was not intuitive.

Brian Moriarty was the principal author of Loom. He had two well regarded games with Infocom: Wishbringer and Trinity. Wishbringer was interesting in that it was a beginner level game, since you could solve puzzles with a wishing stone. However, you could also solve them another way and earn more points. Having multiple solutions for adventure games was pretty novel for the time. Trinity told a story of the atomic bomb, and had you jumping back and forth to different locations in space and time.

This was fun - but so short, compared to Monkey Island it felt like only half the game was there.

That site with the list of drafts seems like a huge spoiler, basically the only challenge in the game is figuring out what each draft means.

This was fun - but so short, compared to Monkey Island it felt like only half the game was there.

That site with the list of drafts seems like a huge spoiler, basically the only challenge in the game is figuring out what each draft means.

Yeah, that's true. I would have been nicer if they had used the words in the actual book that came with the game instead of telling you what they are.

Been working on this when I get a chance and am most of the way through now. Navigation has at times been annoyingly difficult - primarily in being able to recognize where I can go, indoors as well as outdoors.
The unique gameplay has been a treat, and I love

I also now FINALLY know who Bobbin Threadbare is! I've known the name for decades, thanks to Monkey Island, but never knew where it came from.
I could do without his lip smacking sound when he tells me "Hmm.....*smack* guess that isn't a draft". It irritates me to an irrational degree.

However, one thing I did not remember was how quiet the game was. There is wonderful music and voice acting, but when you are wandering around it was mostly silence. I'm sure that is a relic of it being such an old game.

I actually attributed the complete silence to the game perhaps being a bit buggy on modern systems. Now knowing it's not a bug, I guess it may have been intentional to give more importance to the sounds that do occur (the weaving).

be sure to fully investigate the Weavers' island before you leave, and write down all the drafts you come across, because once you reach the other shore, there is no going back.

I'm in the sword sharpening room, but I never learned the sharpening/dulling draft from the scythe. I'm getting the impression that if you didn't do that, you can't just input the draft anyway, since I found a site that gives me all possible combinations of the draft, but none "do" anything.

Even though I've been gaming for 3.5 decades, I committed the cardinal sin of only keeping one save. I suspect I might be boned.

EDIT: Nevermind, apparently there are two ways to solve that puzzle. PHEW!

Finished!
Need some time to process my thoughts, but I'm certainly glad there are multiple solutions to critical puzzles.

The credits made me realize that we're playing this game on its 30th birthday (at least by year). Also: Orson Scott Card! Wow!

Eleima
Posted: December 5, 8:27 AM
I find your lack of tag disturbing

Hey, congrats, AUs_TBirD!
That's so funny, I never noticed the smacking sound (I was just generally annoyed with the whole "nope, that's not it" line

). Of course, now, next time I play it, I won't be able to hear anything else.

Glad you got unstuck, too. That can be so frustrating. The interesting part is that I'd never solved that puzzle any other way than the way you did it, presumably.

You used the twist/untwist draft, right?

Glad I could introduce you to Bobbin Threadbare.