This classic needs no introduction. But I'm gonna do one anyway! This game was initially released in October 1990. Yup, it's (Spoiler: it's actually 30 years old, I can't count and I'm a lot older than I think I am!)

Ron Gilbert originally came up with the idea of an adventure game featuring a pirate, but he soon teamed up with Tim Schafer and Dave Grossman. The rest, as they say, is history. The trio brainstormed at Lucasfilm Games, using movies starring Errol Flynn to birth the insult sword fighting mechanics and deliberately designing a game where you couldn't die or paint yourself into a no win scenario (unlike Sierra's games).

The result is an absolutely charming game of swashbuckling adventure on the high seas!

The main thread is right this way. We'll be playing The Secret of Monkey Island in October 2020, with an extra month for wiggle room.

designing a game where you couldn't die

Spoiler: this isn't actually totally true. There's one way to die in the game, but you have to try really, really hard to find it.

I won't say any more.

Enjoy some of Michael Land's work for the game:

Nice. I’m sure I have a copy or two of this.

I might just use the code wheel for old times sake.

Awesome! I'm looking forward to this one.

Yay! Remember to play with the classic graphics/interface. Not only is the UI faster/less click-y, the artwork is far funnier (especially Stan S. Stanman). Thankfully you can switch modes on the fly with a single keypress.

Oh nice. I wonder how many times I’ve played this game? Oh well, there’s always room for one more

That really IS a nice hat.

The theme for this game is only second to the theme for Daytona USA as my favorite videogame music of all time.

Are you a three-headed monkey? Because your location says "behind you."

Those were the days... hope the link doesn’t explode or something.

I realized I totally forgot to pot the link to the UHS! So I fixed that.
And Redherring, looks like the link worked just fine, and I'm very glad it did.

I actually started this shortly after we finished Curse but it fell off my radar. This will be a good excuse to get back into it.

Eleima
Posted: October 4, 9:09 AM
I find your lack of tag disturbing

Tentative schedule, but in celebration of International Gamers With Jobs Day (Weekends?!), I should be streaming Secret of the Monkey Island on Sunday, October 11th, at 8pm CEST (so 2pm EST, 11am Pacific). Look forward to it!

Played a good chunk of part one last night. I was wondering what I would remember - turns out I remember everything. Who to talk to next. What they are going to say to me. Where to go.

I even accidentally found the treasure without the map, but I didn’t have the shovel yet.

The only thing that grates on me is collecting all the sword fighting insults that I already know.

Eleima
Posted: October 5, 5:26 AM
I find your lack of tag disturbing

Heh, I expect my playthrough will be much the same, although I’ve never found the treasure accidentally, that’s impressive!

That is awesome! My first memory of this game is watching my older brother play while I was too young to figure out any of the puzzles.

And finished. Got through all of Act 1 without help but I needed a hint in Act 2 and 3. Both times I was stuck on how to get a key.

So - first time I’ve played the “Special Edition”. Loved the new look except some of the character designs didn’t feel right. I was constantly flipping back to the original look for nostalgia. Characters and writing are still great after all these years. I still love

how it’s all mostly just a waste of time for Guybrush - the trials are just for show, and after all the work to get to Monkey Island and rescue Elaine, everyone goes back to Melee island and Elaine is perfectly capable and equipped to rescue herself.

I think I’ll take a look at Monkey Island 2 now...

Awesome, I'm glad you had fun with it, Redherring! I'll agree with you, sometimes I don't like the new graphics, I find Guybrush too blonde, for example.

Tonight, I'll be streaming the game (hopefully in its entirety?) on the GWJ Twitch channel! I'll be kicking the stream off at 8pm CET, 7pm UK, 2pm Eastern, 11am Pacific.

Tangentially related, here's the version of the game I first completed (images spoilered to keep post size down): 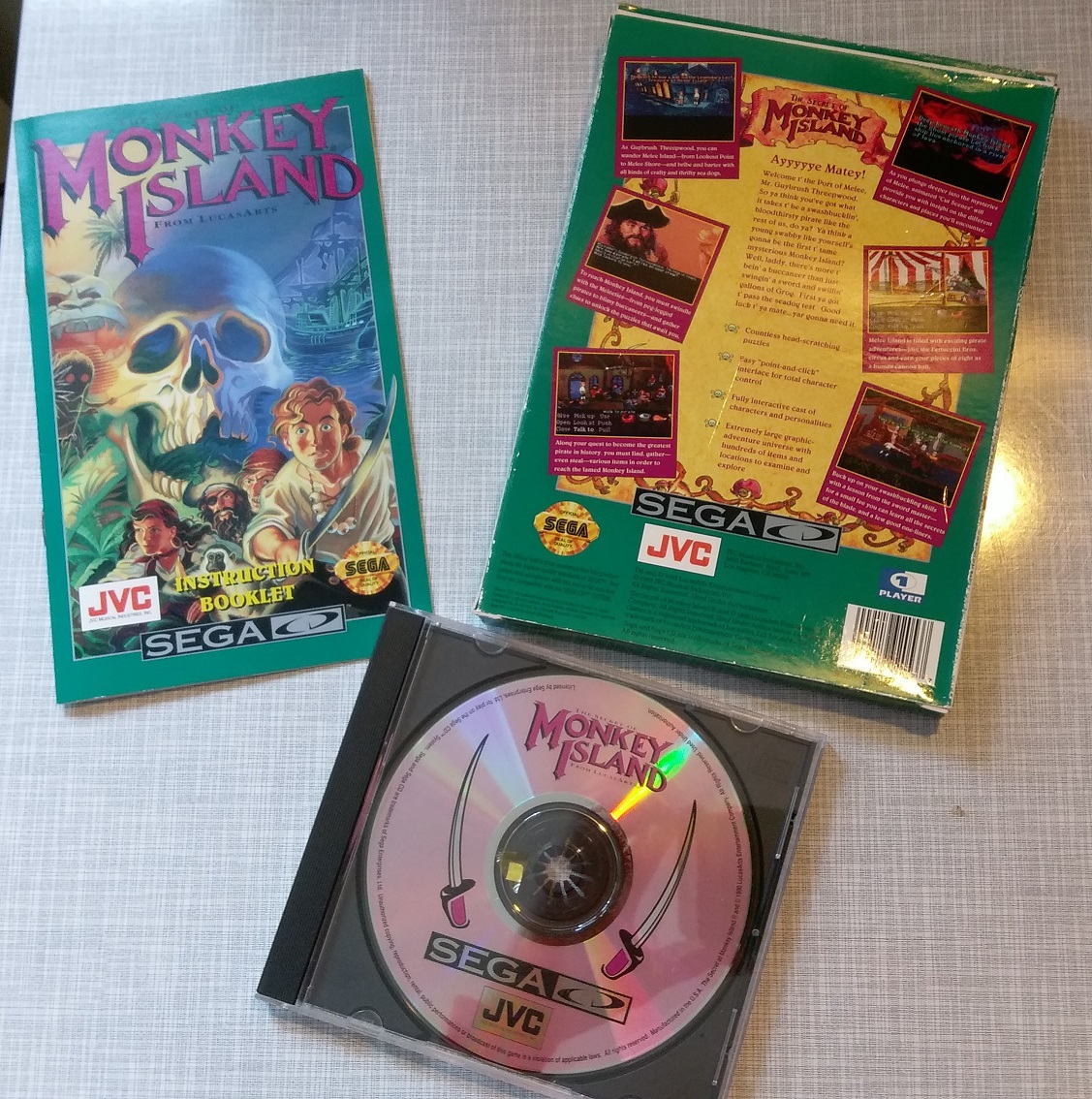 and here's the version I most recently bought: 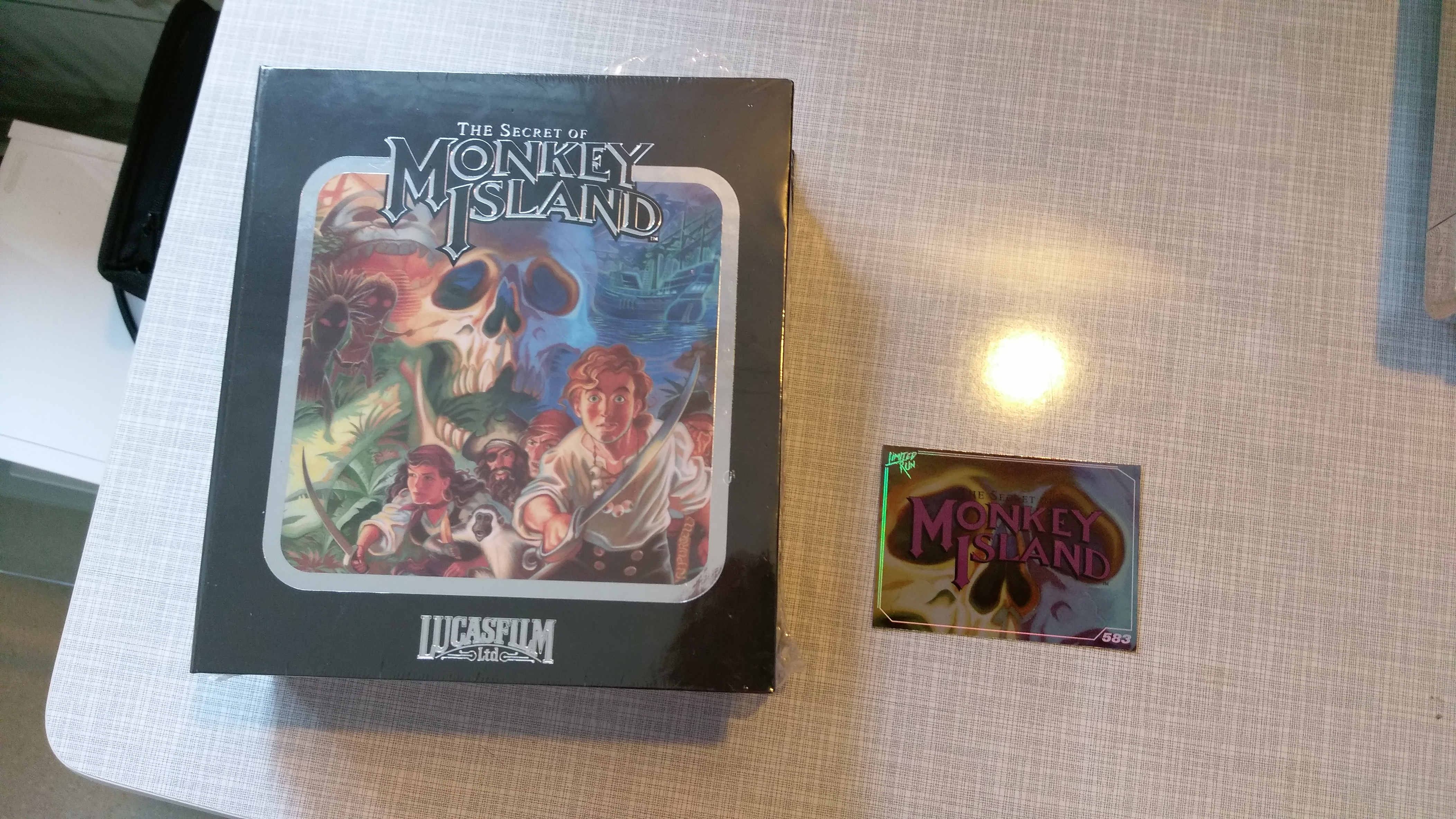 which includes (image from Limited Run Games, since things are much easier to recognize than on my photo):

Weird story about my purchase of the Limited Run Games re-release for anyone who cares:

I ordered that collector's edition for myself as well as my closest friend, who is a huge MI fan. As you can see, it was initially supposed to ship out at the end of February. His birthday was the middle of March, so it was meant to be a birthday present.
Then Covid hit. The release was delayed, delayed, and delayed again. For a while it said "May 2020", but that passed as well. I had long since sent him pictures of what I bought for him - "no really, I did!".
I was starting to think it would never arrive. My friend was planning to visit (for the first time in over a year) in late July on his way to Italy for vacation, but cancelled when we got sick, and they didn't want to risk getting sick on their vacation. Two days after they were supposed to visit, I get a shipping notification. The scheduled delivery date in early August came and went, and I figured it could be months again until it gets through customs, etc.
On the way back from his vacation to Italy, my friend made the impulse decision to stop by after all. The next morning, as we're talking about the invisible birthday present, I get a notification that it's out for delivery. He doesn't believe it. Two hours later, the doorbell rings, and The Secret of Monkey Island Premium Edition is delivered on the perfect, random day of August 8th, nearly 6 months after its initial planned ship date.

Awwwwww, that was a sweet story, I'm glad he got it in the end!

Those are some pretty amazing goodies.
And I'm glad that you played the second game (honestly, it's the superior game of the two, but I probably shouldn't write that, because that will probably incite a mutiny or something - oops, too late).

Soooo... what's this Loom thing, then?

Eleima
Posted: October 15, 6:07 AM
I find your lack of tag disturbing

I finished it in one sitting, four hours live. Ooof, that took longer than I remembered! And there's a lot I didn't remember, as it turned out! I checked, and I think I hadn't played it in ten years, give or take a year or two. I was glad to have a few goodjers in chat to give me nudges in the right direction! I'm fairly certain this wouldn't have happened with MI2, I've just played the first one a lot, lot, lot less! As it is, I'm glad I replayed it, the puns are still funny, and actually, I'm kinda hoping to play the second game sooner rather than later, now.

The 20th is coming up soon, can't wait for the poll!

Just beat the game an hour or so ago. I honestly don't recall if I had actually beat the original... I think I did, but it was a lifetime ago, so, there's that. In any case, I was able to piece stuff together with only a peek here and there for online help. It was fun and short, except for that darned Grog puzzle...

Today, I stumbled upon this YouTube documentary that I hope I can find the time to watch.

Also, a friend posted this old (2013) blog post from Ron Gilbert about what he would do if he could make Monkey Island 3. To me, the most interesting thing is that Thimbleweed Park follows almost all of those ideas.

I took about 6 hours to finish but i was doing all the optional dialogue. It is just so well written. I felt very similar to my play through of Day of the Tentacle, whilst nostalgia was fun these are still very good games in their own right once you remove the rose tinted glasses. Thanks again for the nudge to play.

Eleima
Posted: October 15, 11:43 AM
I find your lack of tag disturbing

Wow, thank you for sharing those, Pink Stripes! I took a look at the blog post, and I completely agree with you that it definitely smacks of what he did with Thimbleweed Park. I will say one thing, though, and this may be considered anathema, but... some of it is a little gatekeep-y, with the deliberate intent to frustrate the player. I'd argue that being stuck and stumped by obscure puzzles is not what makes a a great game. It's not what people remember. People remember the dialog, the lovable, inept main character, the puns, the silliness.
At least that's my two cents.

So glad to hear that you enjoyed it too, Brokenclavicle and Bbk1980.

I never owned the original, but I did play through most of it at a friend's house when it first released. I'm pretty sure that was the only time I played it, despite owning the special edition for forever. I've been taking it slow--partially because gaming time is short and partially because I apparently forgot most of the game so I'm getting stuck in parts

I'm just about to wrap up Part 1, but something I thought was pretty clever:

When Fester/LeChuck tosses Guybrush off the dock, I initially started to frantically grab any of the weapons I could because in my head I figured this was a timed thing and he would drown. Then I realized that this was a Lucasarts adventure game and not a Sierra game that killed you every chance it could.

THEN I remembered what Guybrush told the Pirate Leaders that he could hold his breath for "ten minutes!" So I just let the game idle for a bit, and eventually Guybrush started floating and I got a trophy! I don't remember if my friend and I caught on to that when we played it back then, but I thought it was a neat little thing.