Everything seems to be on fire right now, literally. I really don't have much to say in the form of a witty intro. I hope you can find some solace in your hobbies, if only as a temporary distraction from everything else going on.

I hope everyone stays safe and healthy.

Day of the Tentacle Remastered 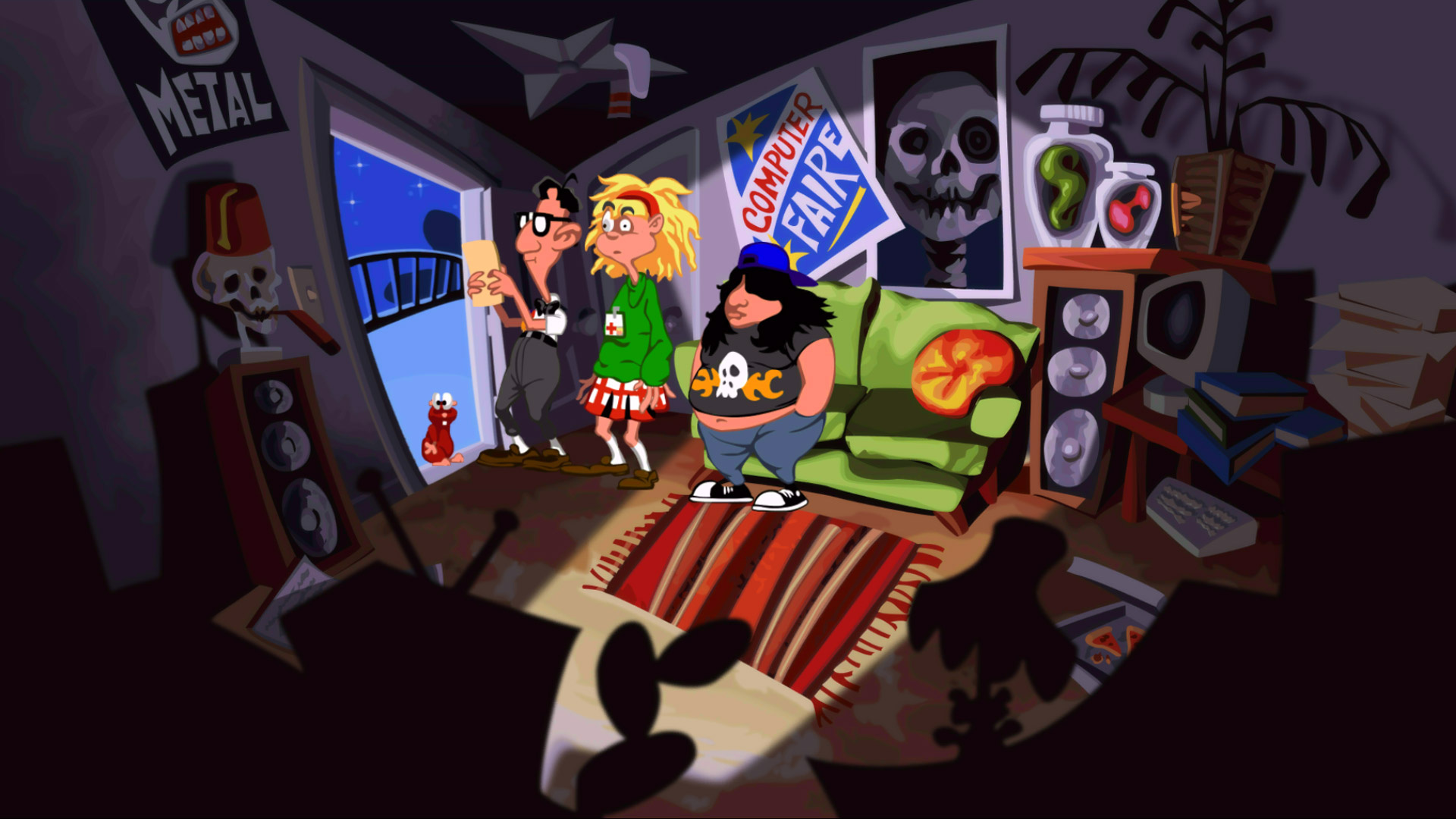 "Dr. Fred’s mutated purple tentacle is about to take over the world, and only you can stop him!

Originally released by LucasArts in 1993 as a sequel to Ron Gilbert’s ground breaking Maniac Mansion, Day of the Tentacle is a mind-bending, time travel, cartoon puzzle adventure game in which three unlikely friends work together to prevent an evil mutated purple tentacle from taking over the world!" (Official Site)

Multi-Platform
Darkest Dungeon -
Day of the Tentacle Remastered - ,
GRIS -
Last Day of June -
The Last of Us -
The Last of Us: Left Behind -
Little Nightmares -
Maneater - staygold
Return of the Obra Dinn - staygold
Spyro: Ripto's Rage [Reignited] -
Steamworld Quest - Stele
The Surge 2 - JohnKillo
Trails in the Sky SC - JohnKillo

Oh, man, oh, man, I have not completed anything I've declared... or anything since I beat FFVIIR early in May. So, carrying it all over from the past thread, and adding to it. I'm insane.

We'll see how I manage.

And I picked up Darkest Dungeon (PC, multi) on Steam this weekend. So trying to finish at least one run the next few weeks.

Repeat on high. Playing more
Trails in the Sky SC.

Finally, I have beaten a game again!

Just put Little Nightmares to rest... at least, the main game. Now, onto the DLC here and there as much as I can muster to withstand the tension. Wonderfully creepy game, this!

I’m also declaring Day of the Tentacle! Might as well declare Lair of the Clockwork God (PC) too.

Finished Day of the Tentacle in one sitting on Friday. ^^ I still got it.

I have never participated in one of these threads before. To cope with my own shame and inability to finish anything, I'm going to declare Maneater and Return of the Obra Dinn.

Finished Day of the Tentacle in one sitting on Friday. ^^ I still got it.

Please tell me you at least had to look something up so I feel less dumb. Pretty sure when I played it back when it was a PS+ freebie I was looking stuff up all over the place.

Well... no?... ^^ I’ve played that game dozens of times over the past twenty years.
Last time was four years ago so some of it was a little fuzzy, but I remembered eventually, and essentially cruised right on through.
But some of the puzzles are wacky (like the catching the cat in the future), so if you’ve never played it, it makes total sense you’d look things up.

Day of the Tentacle Remastered is done. That was a nice, short romp. I remembered enough from back when I played it in the late 90's - I didn't have the equipment to run it when it had originally come out - and the rest only took some Lucas Arts Adventure game logic.

It also reminded me of the Maniac Mansion TV series, which I only vaguely remember, and I now want to watch for some possibly masochistic reason.

Alright, after what feels like a ton of time trying to collect orbs just to be able to face the final boss, I finally put Spyro: Ripto's Rage [Reignited] to bed. That leaves just one more pile pick to get through, and I feel fairly confident that I'll be able to get through it by Sunday.

With the end of the month looming, a quick update:

Declared and finished:
The Last of Us and The Last of Us: Left Behind - both were great, both were intense, sometimes draining experiences, and both left me wanting more, even during the times when I dreaded pushing forward (like when I knew there was another gaggle of clickers up ahead). My one minor complaint was that Joel and Ellie must have reduced the remaining human population of North America by approximately 10% by the end. A bit less human murder would have seemed more "realistic" to me, but such is the world they live in, I guess.
Also, I have yet to see a verified explanation about why so many places have been flooded, though Higgledy filled me in on some theories.

Undeclared, but finished:
GRIS - Not really challenging, but beautiful (visually, aurally, and in the way it presents its story). I loved most of my time with it and certainly recommend everyone even remotely interested play it.
Also, I jumped at the same moment Eleima did on stream, even though I knew something was coming, but forgot the exact moment when.
Super Mario Odyssey - Played through this with my oldest. I thought he was obsessed with Botanicula a few months ago....clearly I had no idea what "obsession" for an almost 4-year-old could be like. All day long I'm incessantly being asked to "play the game with me" until I relent. What it means is that I play 97% of it, let him grab the moons I've unlocked, and watch as he wants the controller at critical times only to repeatedly jump off ledges or take hits (usually) on purpose.
Thankfully SMO is fun with some fantastic environments and gameplay aspects. I've never gotten more than an hour into a 3D Mario until now. The credits have rolled, but we're a long way from not playing it anymore. As of this afternoon, we're up to 358 moons. Apparently there are 880. Inconceivable!

Started and hope to finish this weekend:
Last Day of June - I'm not sure where this is going yet. The character art style is far less creepy than a description of it (no eyes - only sockets, and no mouths!) would lead you to expect. I still don't know if this is just a sweet story, or a tragedy, or if we're going into scary territory (this seems the least likely option). Looking forward to find out soon.

Haven't worked on in spite of good intentions:
The Last Story - I keep moving the Wii from one TV to another (whichever one seems like it'll be free when I have an opportunity to play), but the motivation come that time has just not been there yet.

Even when you know it’s coming, it still makes you jump.

Glad you got to enjoy the whole game!!!

Darkest Dungeon was down on Saturday. That is a really fun game. The default inventory limiting is pretty ridiculous and turns the game into way too much of a grind. Thank goodness for PC mods and Steam Workshop. Basically tripling the count on everything made the game a lot more fun and respectful of my time.

I still didn't get the entire town upgraded. But I did finish the game in 72 weeks. Every quest takes a week of game time. There's an achievement for taking over 2 years, but also one for finishing under 99 weeks. So I think I did ok.

We'll see if I can finish Steamworld Quest in 3 days. I didn't play for a couple weeks but did a chapter today. 5 left.

Oh dang, I forgot to check in on this thread this month. Only two days left but I am pretty close to the end, so I am going to declare Bravely Second (3DS) for this month. Worst case scenario I wrap it up first week of July.

I'm back to my game-finishing ways! I just put the final hits on the big baddie in The Legend of Zelda: Link's Awakening Remake. That completes my list of picks for this month, and it's a total of 5 game beaten in total for me in June (4 of them declared).

Finished Last Day of June about 30 minutes after midnight on the first day of July. Oh well, it was still June everywhere east of Greenwich. I got it as an Epic Games Store freebie, and am glad I got to play it. What started out as disgustingly saccharine eventually turned into a competent, if not entirely original story which could cause you to get something in your eye once or twice,wrapped in some light puzzling. What was really unique is the art style. It should be creepy as heck, but actually ends up being very endearing. It's impressive how expressive characters can be without eyes (only sockets) and no mouths.
2-3 hours is just the right length for this game, and it was a pretty nice way to end the month, even if I did stay up way too late to see it through.

I finished Return of the Obra Dinn last week! So 50% success rate!

I tried to finish Maneater but there seems to have been a bunch of bugs introduced since I played it last and I got stuck in 3 infinite loading screens within the first 30 minutes of trying to finish. I did become a Mega shark though, so that was cool!