I read that in the patch notes and it stuck out to me as well. Not sure what they’re balancing as you can break the game very early anyway.

Right, I know they were intentionally removed. But I can’t slot them in other chest armor, and I can’t sell them.

Finally finished. It was good. The story picked up at the end and I had fun. Never reached the heights of Odyssey for me though.

I laughed out loud seeing a certain someone in a terrible wolf t-shirt.

Never found any fireflys though.

I caught 2 fireflies the entire game.

I released three or four so far at the pond. They show up around dusk, and you have to sprint at them to catch them.

I found what might be a workaround to the save problem I was having. So I've been spending an unhealthy amount of time in England. I have the Xbox nag me to take hourly breaks but I usually ignore it.

Asgard did end up being kind of underwhelming. Maybe it would resonate with me better if I was more familiar with Norse mythology, but while a bunch of "stuff" happened, it was hard to care about any event in particular. I was thrilled to get back to the vibrant colors of England, and spent a bunch of time doing side quests for my settlement. They just keep unlocking more of them, so I'll keep doing as many as are available, until I finally wander down to Lunden and see what that whole place is about.

I have a full crew of friends' Jomsvikings now!

Nobody wants to hire mine, it seems. I wonder where he's hanging out? He's wearing full Carolingian armor.

I've also completed the two special DLC quests: Legend of Beowulf and Way of the Berserker. Enjoyed both very much.

Love reading folks' tales here. I spent over 100 hours on it, and still missed a lot of stuff. Fireflies? Boewulf? Huh.

Also watched SkillUp's review (tl;dr: he didn't like it) -- glad I didn't watch it before I played.

I can see his points about the mechanics and systems, but I think what kept me going was that I just loved being in England, thinking about that period of history, and 'meeting' legendary historical figures.

SkillUp made a lot of assumptions about the game systems that were just plain wrong. I was really disappointed with that review. It almost seemed like he was pandering to some anti-Ubisoft crowd or something.

I certainly found the dual-wielding, and trying out different weapons in each hand, more engaging than he made it out to be. Also enjoyed the parry mechanics, plus found some fights with zealots and bosses hard even with the dodge-slow ability

I noticed the next stage of Valka's quest has me heading to the southeast of the map to gather herbs. Will there also be a story arc to commit to in that region as well? I assumed every single region would have a storyline attached to it, but the recommended power level in that region is lower than the current story arcs I have available to me.

Finished Lunden, enjoyed it quite a bit. Now off to Sciropescire, then maybe Vinland after that.

yep every county eventually has a storyline attached to it via the diplomacy map thing.

I noticed the next stage of Valka's quest has me heading to the southeast of the map to gather herbs. Will there also be a story arc to commit to in that region as well? I assumed every single region would have a storyline attached to it, but the recommended power level in that region is lower than the current story arcs I have available to me.

Patch 1.2 is out tomorrow. Big feature is finally adding transmog, but you have to pay in-game money to do it, which I'm not a fan of.

Patch 1.2 is out tomorrow. Big feature is finally adding transmog, but you have to pay in-game money to do it, which I'm not a fan of.

Well that was a quick YAY to aww..

Also it broke a bunch of new stuff.

Also also it didn't fix a bunch of stuff that people have reported repeatedly since launch.

Also this series of thread titles on the official Ubisoft board cracked me up: 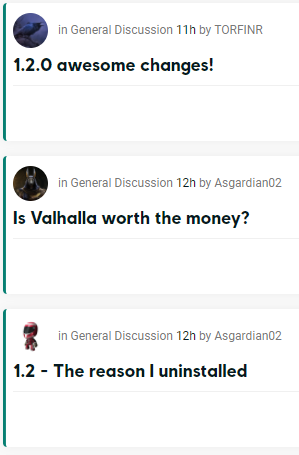 Every patch that has a seasonal event has broken the game in one way or another. Typically, I'm very sympathetic to game development but with Ubisoft, there really isn't much of an excuse for this.

Last night I finally got to murder one of the most annoying characters in the game who is always messing things up for Eivor. It was such a relief to be rid of that jerk.

Latest patch somehow lost me an hour of progress...

Ouch. I've had so many problems with saves I've taken to backing them up and never using the quick resume feature for the game, because apparently it messes with saves. The Ubisoft "Connect" connection is so spotty that it frequently doesn't cloud save every time I save. So if I try to reload, sometimes it goes with the last cloud save it has, which is infuriating. So I never use the "Continue" feature either.

I'm having a problem (apparently common) with one of the festival quests. I can't change any of the decorations in the settlements because the signposts that let you set decorations aren't there.

I do not remember Origins or Odyssey having this many issues this late after release. I guess Ubisoft have forgotten the Unity lesson already.

To be fair, there's a pandemic going on. But it is frustrating. I haven't played since 1.2 dropped, and there's an update hopefully coming this week to fix some of the issues, so I suppose I'll just wait for that to come out first.

I'm just waiting for the DLC drops at this point.

My new thing is when I wake my xbox from sleep, about 50% of the time I can’t call my raven. Reload fixes it.

So at this point are they trying to kill off their good reviews?

So at this point are they trying to kill off their good reviews?

Not really. I am still very much enjoying the game, and nearly 200 hours in! It is just full of lovely little design details, like:

Last night I was raiding a bandit camp, and they had their phat lewtz stashed in underground storage. I had to murder one of them to get the key, and when I went down there, it was very dark. I unlocked the door, pulled out a torch so I could see...

and it turned out they had coated the inside of the door, floor and ceiling with flammable oil. FWOOMP.

I had a good laugh over that one.

When I left I noticed a tiny trail of oil outside the door, so if you were super observant you might have been able to avoid it. That's just brilliant RPG design, though.

Also, today the news came out that they are adding one-handed swords to the game in a future update. Hopefully soon! I just wish they would release a set of normal-looking period appropriate armor. A lot of their gear is full of fictitious Viking design elements, covered with fur, or just pure fantasy looking. I particularly dislike the World of Warcraft style shoulders on many of the armors. Pauldrons weren't even a thing in 9th century armor!

Fortunately, since they have added transmog, I don't have to put up with that nonsense and I can cobble together a look that makes me happy.

Based on videos and articles I've seen it does seem that most of the older Viking swords found by archaeologists were decorative or heirlooms not meant to be used in combat. I haven't read as much about the Saxons, but this article in Wikipedia says short swords were commonly used in the late 9th and early 10th centuries.

There is also this from Wikipedia:

"During the mid-9th century, there was an influx of these high-quality weapons into Scandinavia, and Frankish arms became the standard for all Vikings." Frankish arms meaning high quality iron Roman-style short swords, acquired during raids. Valhalla takes place in the late 9th century, so many Viking armies may have swapped some of their axes and spears for sword and shield at that time.

And a few of the characters are from the middle east.

I am enjoying the hell out of this game. I think the story is much better than Odyssey. I never finished Odyssey, but put in probably 60 hours total which included me starting over.

I want to keep playing just for the story. And just tried out dual greatswords. Kind of cool! Dumb question, why is Eivor so much shorter than the other characters? LOL

I am level 90, but still using the Raven armor from the very beginning. Any recommendations for someone that likes to melee and around my level?