Less prone to crashing into each other, also.

Huge credit to Liberty Media though this race. I love that they didn't even bother showing Lewis and kept the cameras on the actual action. That's a massive improvement from last year's broadcasts.

So, we sort of tuned out during the trophies last week -- were the robots new this week?

Because yeah, that was absolutely spectacular, and so much cooler than some deeply problematic Saudi prince or whatever making the delivery.

It had to come eventually and no real surprise who it's from...

We confirm that Renault DP World F1 Team has submitted a request to the Stewards of the Event for clarification on the legality of the Racing Point RP20.

I don't understand how the Stewards did not penalise RP for Stroll's lunge on Ricciardo, but I do expect those Stewards to do nothing here.

Holy sh*t that race was incredible! I've sort of attached to Lando, so I had his onboard pulled up for the last 15 laps or so (maybe longer, it was when he first started closing on Sainz) and I couldn't be more glad I did. His last ten laps were a joy to watch and THAT FINISH.

Heh, yup. Lando is killing it for sure. Even if these end up being his two best races of the year, he's definitely proving that he needs to be considered highly on the list of next generation talent. Also, good news for him is that McLaren seems to be on a great trajectory right now, and while I wouldn't quite make it a firm prediction I'd say there's a solid non-zero chance he wins a driver's championship before at least one of the other people that currently top those lists (ie, Verstappen and Leclerc).

(Also, it's all spoilers here all the time -- no harm in being cautious on race day, but no need to go out of your way either.)

The Formula 1 youtube channel has some great videos of the amazing last few laps of the midfield fight.

This one has all four onboards synced up with relevant team radio from each.

And this one is just Norris, but has all of his team radio from those laps, which is very interesting to hear.

So, obviously, Lewis had a fairly easy job going from pole to the top of the podium, but can someone describe/explain what was so special about his pole lap, other than it was raining? Because everything I saw about it had people talking like he'd damn near walked on water.

I mean, he nearly did.

Lap after lap, he was so clearly in a different class from all the other drivers, and that final lap was so clean (other than that slight bobble after turn 7 or whatever) that he made it look as though he was driving in the dry rather than very nearly the wildest conditions these machines can run in, finding all the weird lines through the puddles where there was actually grip to be had.

And the proof was in the pudding: his time was 1.2 seconds faster than the next driver. Even if Verstappen (another driver who is excellent in wet conditions) hadn't spun on his last attempt, it still would have been at least .5 seconds faster. Hell, he was 1.5 seconds ahead of Bottas in the same car.

That's just wild, virtually unheard of, at least in the modern era of racing. A quick google search shows that the last time there was a gap that large was probably 1997, although it looks like it was much more common in the early years.

EDIT: Nevermind, looks like there was a similar margin in 2017 as well -- but it was also achieved by Hamilton, also in wet conditions.

Zero covers it - This kind of gap doesn't happen very often and certainly not at a track that's barely 2.5 miles long and takes about 65 seconds to lap in the dry.

¹ - It was wet.
² - Bottas only put in one timed lap and Hamilton didn't bother to do more than an installation lap.
³ - Red Bull had their engine turned down.

Checo didn't seem to be having a lot of fun out there in FP2. He looked an awful lot like me driving on full wets in an F2 car in F1 2020. Which is to say just endless wheel spin, unable to turn, unable to brake, and squirrelly as hell.

Checo's engineer was constantly on the radio about rear tyre temps and they had a similar problem last week in the wet in ̶A̶u̶s̶t̶r̶i̶a̶ Styria. It looked a handful and had lots of opposite lock moments which look great in the team photos. Provided you stop taking pictures before Checo hits the grass.

I liked the conversation between Kimi and his engineer. The guy was going on about front temps and Kimi was adamant the back was the problem and the two kind of talked while ignoring each other for a bit and then Kimi said "the most grip I had was in the pit lane."

Not a fan of whomever this is doing the commentary for PSC practice. Where's AJ?

"I wish Mercedes didn't get so many one-twos."

One finger curled on the Monkey's paw...

"I wish Mercedes didn't get so many one-twos."

One finger curled on the Monkey's paw... 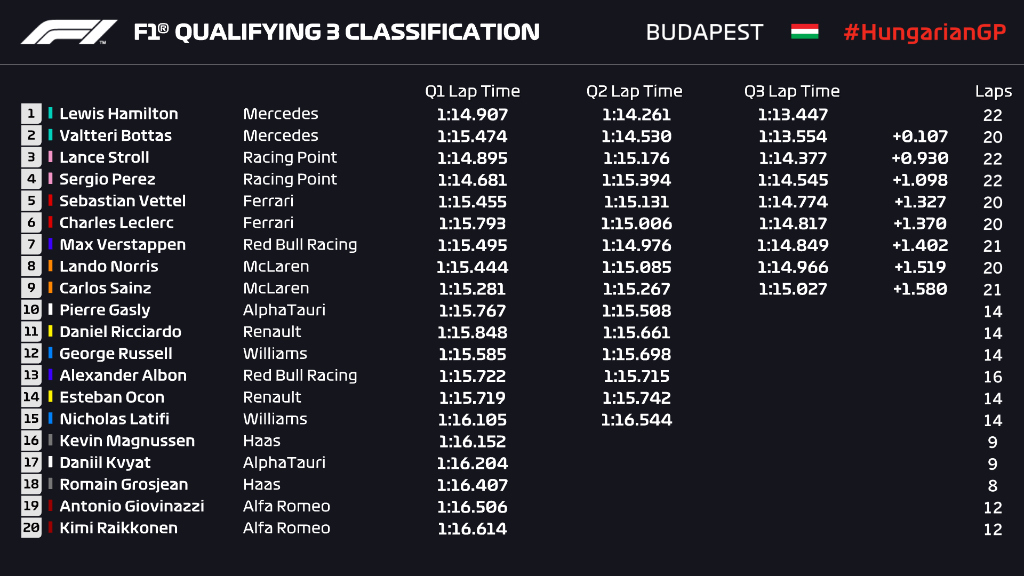 Ferrari's engines are still crap, but looks like the rest of their upgrade package is letting them compete on a track that isn't power heavy, even if their customers are still hosed.

Albon is maybe too much in his head, but that Red Bull is still maybe a bit of a troublesome car.

Both Williams made Q2 though, topping the entirety of the Ferrari customer stable. Russel even beat a Renault and a Red Bull! They'll probably end up falling off a bit from those very respectable starting positions in the race, but it's still promising progress.

Pole to pole again. The boy is good.

Good for Red Bull today too, after the horror quali they had.

Of course, it turns out both Haas might get a penalty and three weeks from now both Racing Points might get excluded, so who knows what this final result looks like.

However, both Haas are given 10 second penalties for the radio calls telling them to change tyres during the parade lap.

As a result MAG drops from 9th to 10th, but they do at least still get a point.

Just an amazing recovery for Red Bull in nearly every possible respect. I saw that slide during the formation lap and I was like, "well, game over for Max." Nope! Amazing work from his mechanics to even get that car driveable, let alone capable of running the whole race cleanly so that Verstappen could hold off Bottas at the end. And meanwhile, in the face of tons of (generally undeserved) criticism, Albon once again showed that he deserves that drive, ripping from the back of the grid to very respectable finish. Sure, he's not matching Max's pace, but that's very obviously not a fair comparison.

Also, even though I'm somewhat in the camp that looks a bit askance at Stroll, full credit to him this weekend for showing that maybe he deserves to be considered to hold his place on the team on merit (or at least on potential) should Racing Point/Aston Martin actually hire Vettel for next year.

Honestly other than Max's incredible drive and McLaren's abysmal performance, my only takeaway from that race is that the new regs and the spending cap cannot come soon enough. Mercedes is so outrageously dominant that it's just become silly. Lewis lapping everyone up to and including P5, taking an extra pit stop and still winning by a massive margin is just boring.

That level of dominance doesn't happen in any other sport.

my only takeaway from that race is that the new regs and the spending cap cannot come soon enough. Mercedes is so outrageously dominant that it's just become silly.

Major regulation changes favour teams with the best organisational structure and the best people. The last time we had a significant redefinition of the formula Mercedes won the first six races and nine of the first ten.

There probably isn't a double-diffuser Brawn GP hiding in the pack like 2009, so we're relying on Ferrari or Red Bull to come out of the gates with a brand new untested concept that outperforms Mercedes.

Sure, but limiting their spending and limiting wind tunnel time on top of bringing it all a bit closer to a spec series will make a more significant impact, I'd wager.

I don't think they've tried anything this drastic before.

Yeah, the financial regulations are the genuinely new x factor here that could move the needle.

With them, and with recent trends, it's not inconceivable that we could genuinely be looking at a situation where at the very least McLaren and Aston Martin have very real opportunities to put together a car that can regularly join the big three on the podium after the 2022 technical changes come into play. In theory, Renault could be too, but I'm less confident that they've got the organization and culture needed to really shine.

Because really, I think that's the big takeaway from Mercedes' dominance in recent years. Money matters, drivers matter, but even more so, good culture and management matters. Ferrari very clearly has sh*t in that regard, so they can spend as much as Mercedes (or more, which I think has been the case for the most part?) and their teams just aren't going to be able to produce the level of consistent technical output needed to seriously challenge a team that's run well.

Spent a solid 20 minutes gawking at this today.

When you have 18.3 million followers you can't afford to go "didn't read the comment lol."

An amount of people will see Lewis' original post as loud support from a very public figure and then deletion of the post as further proof that the establishment is silencing the conspiracy.

I'm not one of those who think sports stars are responsible for raising my kids, but when you have a reach as large as Lewis does you should do more/(at least some) due diligence before reposting something.

Well he then went on to say "I'm not an anti-vaxxer, but man, check out these anti-vaxxer talking points I'm going to continue to spread!"

Between that, the seriously biased and terribly misleading vegan documentary he was in*, and how out of touch he is with regard to the price of his fashion line, I wish he would just kinda pay more attention.

*I eat a vegetarian diet 5 days a week, so my criticism has nothing to do with hatred of plant-based diets.

Yeah, not sure how that's gonna work. Doesn't his 'bubble' include his entire side of the garage?

He needs to get on the podium. This is his chance!