Alright motorsports fans, answer me a noob question. What the hell does it mean to "rubber in" a track? And why does track temperature matter so much?

Rubbering in means that bits of tire are being scrubbed off of passing cars on the racing line. Generally, this means that bit of track is nice and sticky so you can take the corners faster. The exception to this rule is in the rain. The rubber repels the water and makes the normal racing line extremely slippery.

Track temperature matters because the warmer the track, the softer your tires, the more grip you have. Downside to this is faster tire degradation, but that's where tire compounds come into play. Choose a harder compound that, combined with a warm track temperature will equal decent pace with long wear.

I mean, come now, a casual American can't be the first person to post here about Vettel leaving Ferrari.

DoveBrown
Posted: May 14, 9:53 AM
Office Linebacker

I don’t know what to think. Ferrari have clearly bet the house on LeClerc being the future but he is so young, does he give you enough feedback to build a championship car. So who is your number two, Ricardo is the obvious free agent but he will never sign without equal status. My left field suggestion is Hulkenburg signed explicitly to do car development and a lower step on the podium.

Sainz to Ferrari, Ricciardo to Maclaren.

That was quick, just a Renault seat going now. How burned is Hulkenburg?

I totally would have posted about, but I had a silly day full of work yesterday.

Same goes today, so I can't go wild with speculation now, but I think the common wisdom out there is probably right:

Sainz to Ferrari
Ricciardo to McLaren

EDIT: Hah, and just as I was posting it final confirmation occurred.

And then you get to wild speculation territory -- some are saying Vettel goes to Renault or Racing Point when they become Aston. I feel like his statement sounded like he intends to retire unless this year changes his mind, so we won't know more than the above anytime soon.

Maybe I'll go ahead and drop my marker on him retiring (at least for a year or two), and one of the sillier options floating out there coming true: Renault will pull Alonso out of retirement.

With Merc power units next year I wouldn't be terribly surprised if McLaren have a faster car than Ferrari. Ferrari had absolutely no pace after they got busted for cheating last year. Not only that, they were so slow in testing in 2020 that people were assuming they were sandbagging. I get wanting to drive for Ferrari, I really do. But I'm still somewhat surprised at the move.

Not to mention the Sainz/Norris rapport. That will absolutely not happen with Leclerc. So will Ferrari have no number one driver? If Charles wasn't willing to back off from Vettel, he sure as sh*t won't give Sainz an inch. So will it just be constant battling between the Ferraris yet again? That didn't work out so well in 2019.

I hope Hulk gets his seat back.

Not to mention the Sainz/Norris rapport. That will absolutely not happen with Leclerc. So will Ferrari have no number one driver? If Charles wasn't willing to back off from Vettel, he sure as sh*t won't give Sainz an inch. So will it just be constant battling between the Ferraris yet again? That didn't work out so well in 2019.

Heh, when the other serious option was Ricciardo, I think Sainz was the right choice at least from Ferrari's perspective.

I definitely agree that there's a distinct possibility that Sainz might regret leaving McClaren just as they appear to be resurgent -- but, I imagine that unless where you are is currently on top of the world (ie, you are Hamilton or Bottas), you just don't turn down a Ferrari seat when it's offered. 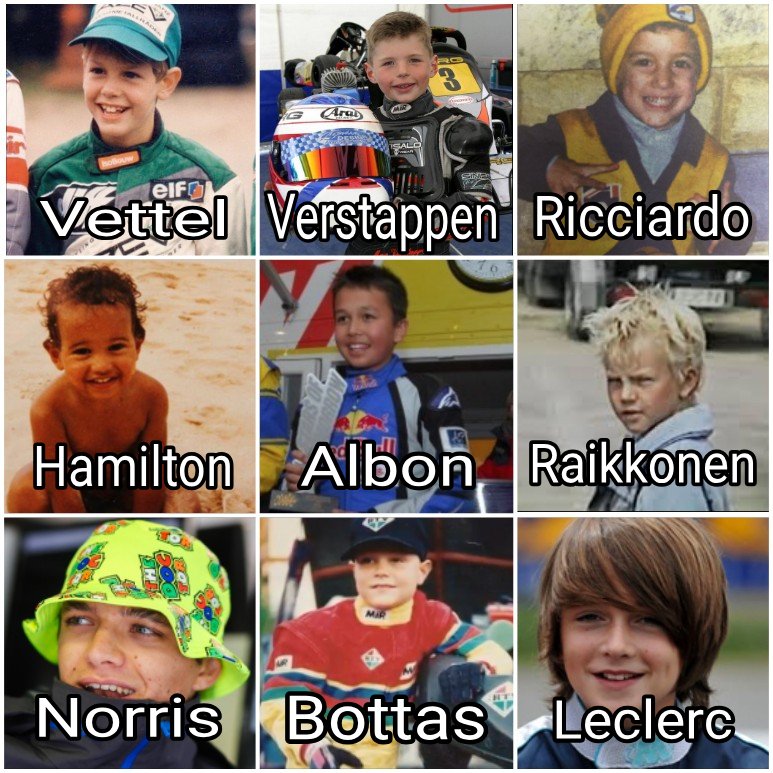 I'm missing something, what am I missing? Is it Raikkonen not smiling?

I'm missing something, what am I missing? Is it Raikkonen not smiling?

Yeah, that's a picture of Lando from 2019 during his honeymoon phase with Valentino Rossi.

Since there's no real racing to talk about yet, here's a bit more on the Create a Team mode in F1 2020:

The first race this year is Austria, right? After finally watching some of the race replays on YouTube, i'm trying to figure out how to watch my first live F1 race from here in the states.

The first race this year is Austria, right? After finally watching some of the race replays on YouTube, i'm trying to figure out how to watch my first live F1 race from here in the states.

There are two options:

If you have ESPN through a cable provider (or have a friend who does), you can just download the app on nearly any device, authenticate via your cable provider, and away you go.

If not, you can sign up for F1 TV at the Pro level and stream it live that way: https://f1tv.formula1.com/en/

(I'm unsure whether or not ESPN Plus or whatever it's called includes access to F1 races, but it might, and especially if you're a Hulu and/or Disney Plus subscriber, adding on ESPN to that might be the most economical approach?)

I am considering pitching a GWJ online watch-along for the race, just so someone can explain to me what's happening as it's happening.

The Racing Dorks would probably put 10 people into that watch along.

So, a YouTuber i've been following participated in the recent Virtual 24 Hours of LeMans, and the magic of YouTube led me to videos of the fastest laps at LeMans and in F1, and I'm left with a question:

Where is the line between using the curbs (kerbs?) legally, and illegally? Because in some of them, I feel like we see dudes getting WAY UP on the curb.

So, a YouTuber i've been following participated in the recent Virtual 24 Hours of LeMans, and the magic of YouTube led me to videos of the fastest laps at LeMans and in F1, and I'm left with a question:

Where is the line between using the curbs (kerbs?) legally, and illegally? Because in some of them, I feel like we see dudes getting WAY UP on the curb.

The rule I have always seen is that only a single wheel needs to be inside track limits. That can just be a sliver of rubber on the white line.

So, like the tennis rules about whether a ball is in court.

The boundaries are set by the track's officials typically. They are also constantly evolving as tracks get new curbing and runoffs and teams exploit those areas.

Just a reminder that I created a GWJ league on the F1 Fantasy site, if anyone is interested. It can be found here:

A few other miscellaneous bits:

First, there are new liveries for several teams.

Willams lost Rokit as a sponsor, so obviously they've got a big change to make (and unlike Haas and the Rich Energy situation last season, they have the time to actually make it this year). It's a shame, since the original livery for this season was pretty sharp, but the new one is nice too.

Meanwhile, Mercedes has moved from silver to black as a statement of solidarity with Black Lives Matter and to signify their commitment to put genuine new efforts into improving diversity both in their own organization and in the sport as a whole. Also, to look really awesome.

Time will tell whether or not it's just an empty gesture, but at least it's a strong statement, and backed so far by their unconditional support of Hamilton's political activism.

Incidentally, you might also see various bits of rainbow worked into the liveries of other cars, at least temporarily for the first race or two. This is part of a somewhat confused jumble of an initiative by F1 to simultaneously express support for both responsible responses to the COVID crisis and for improved diversity and racial justice world wide.

They've chosen a rainbow as the signifier because in many countries worldwide -- but in the UK in particular, where much of the sport is centered -- it's been used as a symbol of support for medical professionals and other essential workers during. Even there it's had the obvious and predictable issues of confusion with the symbology of the LGBTQ civil rights movement, and F1 is further confusing the matters by literally combining the symbols into one with a very nebulous mission statement around them.

Anyway, that's all well and good, but what matters is what they actually DO.

Finally, here's a few videos that do a good job of summarizing what's happened during the quarantine off season, and laying out what the coming season is going to look like:

After crushing through all of Netflix's F1 series, and falling deep into F1 2019 (the game). I'm excited to watch my first live race this Sunday!

If the Tracing Point is faster than Ferrari and Red Bull I'll laugh.

Ah, god bless, the drama is back.

If the Tracing Point is faster than Ferrari and Red Bull I'll laugh.

Yup, and the McLaren too. 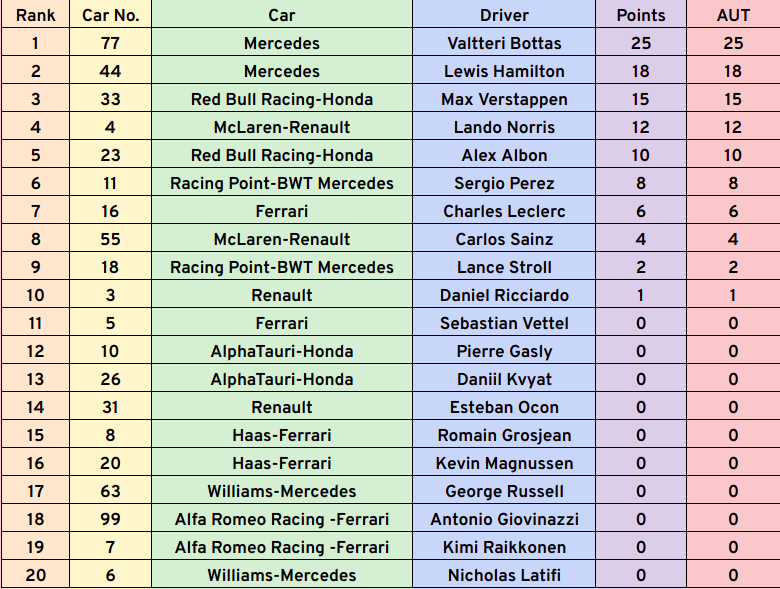 Seb didn't crash, he wasn't on the wrong tires, there was no strategy error or major driver error. That car just didn't have it in it today. Could be different tomorrow, particularly if the conditions change by a lot, but boy, Ferrari has to really be hoping that upgrade coming at Hungary works out.

That said, it's a really, really exciting day for the potential for exciting midfield battles -- and that the midfield could genuinely include everyone but Mercedes (and potentially Red Bull) right now. Let's hope that pans out, and we see at the very least some exciting action chasing the lower steps of the podium this year.

Or, at least early on. Apparently some of the teams (most notably Racing Point) have VERY limited plans for upgrade packages as the year progresses for a number of obvious reasons. So, a few of the folks looking strong in these early races could drop off fast once some of the better resourced teams bring through developments later in the season.

Starting grid got shuffled a bit with a penalty for Hamilton for ignoring a yellow flag caused by his teammate going off into the grass in Q3. 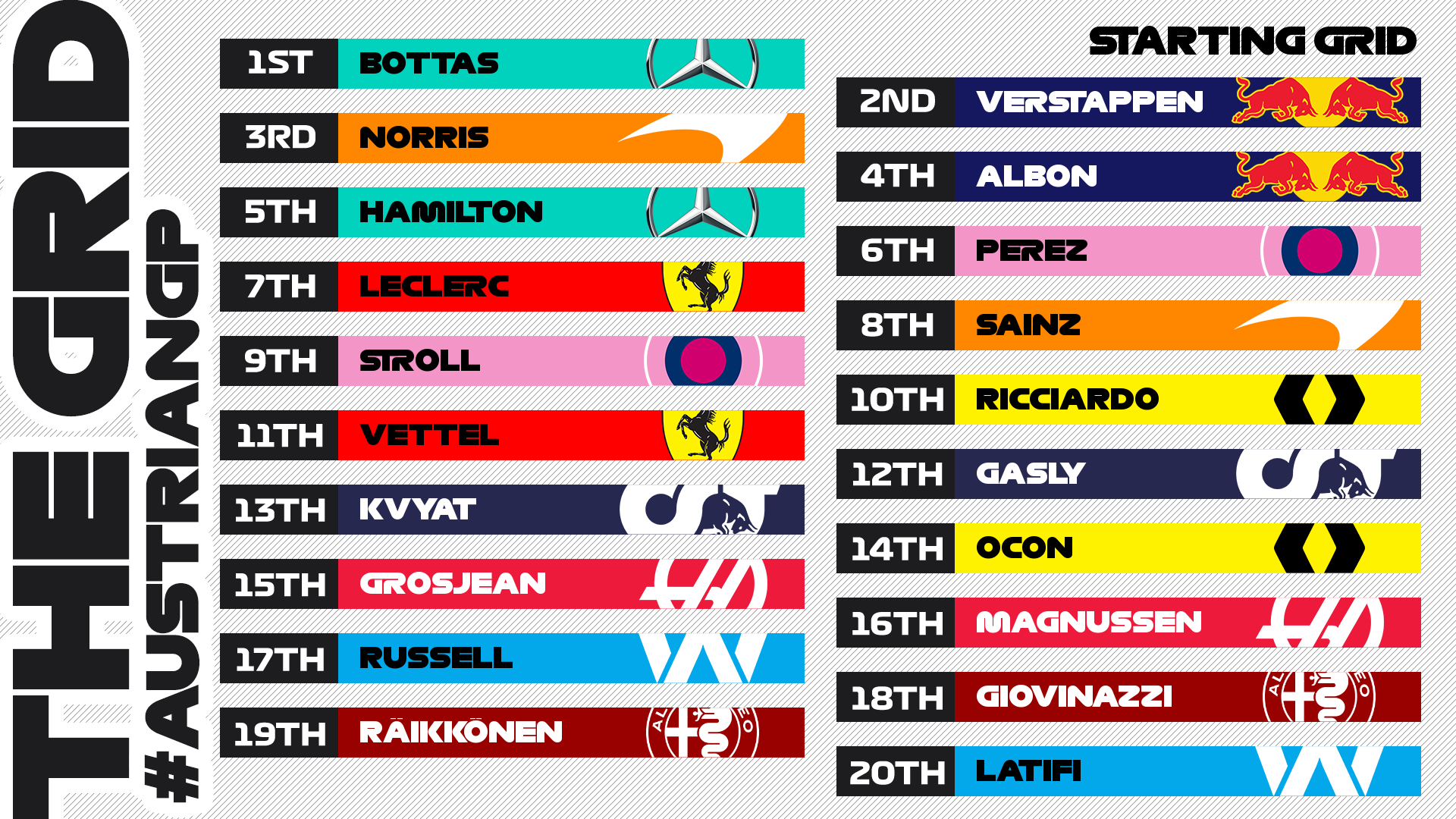