I was surprised to not see a thread for this excellent game here, so starting one of my own!

* I have no previous experience with League of Legends, so no nostalgia factor for me. My opinion of the game is solely based on the gameplay and what it has to offer.
* Coming from Hearthstone & Duelyst, this game definitely seems more complex & less intuitive at start
* For example: there are several types of mana, there are defense turns and attack turns, there are turns within turns (as in - you and your opponent can respond to every action, even if it isn't your turn), there are several 'speeds' for spells, etc.
* There is a nice tutorial (which I'm sure will improve after the beta) and the learning curve is worth it!
* The game gives you three full pre-made decks to play with, I suggest doing the prologue missions, then a few games vs AI and then unranked vs a human opponent
* Once you get the hang of it, the gameplay feels great. Matches are interesting and so far I didn't run into that oh so familiar 'what is this RND bullsh*t!?' feeling
* Progression system feels great and rewarding. I'm still early in the game but it feels like I can just earn a lot of cards by simply playing and doing daily quests
* Each faction can be leveled up separately. It is told that the most efficient way is to level up each one to level 4 and the take it from there
* There are weekly rewards that can also be leveled up by playing, pretty cool!
* The development team believes that the money should come from cosmetics and the cards should be acquired through playing... so while it is possible to buy some cards with real life money, that option is very limited and resets per week. I have never seen a game that limits you with money you can spend. I like it!
* You can't drop in rank once you reach it... takes the anxiety factor away, I like it too!

I literally added this card to my deck before the game.
I'm still experimenting and think this card is very situational, since if you reach 10 mana - late game, one can assume that the opponent will usually have higher than 3 attack units. Unless you managed to survive aggro up until turn 10, which was the case here 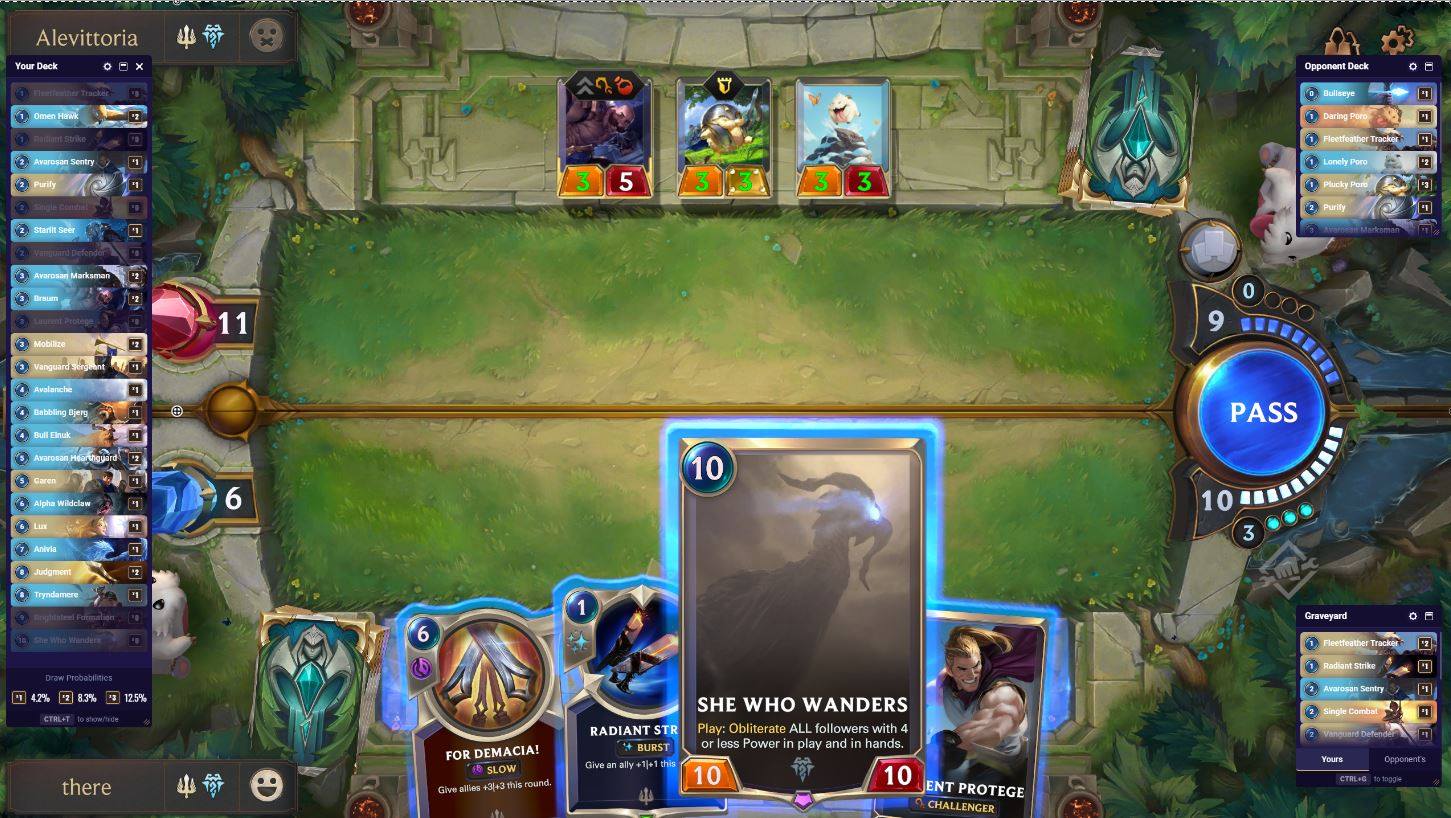 So the weekly rewards were delivered today and I leveled up my reward chests up to level 10 (out of a possible 13?) fairly easily by simply playing a few rounds a day and doing daily quests. Boy, a weekly reward in LOR feels better than a monthly in HS. That's crazy. I was able to craft my first real 'meta' deck

Also, a new patch should be delivered today.
The team communicates it's strategy and thoughts very clearly, this is something I really appreciate considering past experience with similar games.

I love everything about this game, the art, deckbuilding opportunities, gameplay, I really hope it will last longer than ESL

Card games are a relatively new interest for me (thank you Slay the Spire), so I haven't had too much experience with similar titles besides playing 5-6 hours of Hearthstone when that released. I *do* have tons of prior experience with League of Legends, so that plus all the positive buzz and magical price point of 'free' made this a no-brainer to check out. I'm glad I did, as I've been playing this almost nightly since starting a few weeks ago. Unsurprisingly, the production elements are all top notch. The card art is beautiful, the champion level up animations are vibrant but brief, and all of the voice quips and minor animations going on during each turn really make the board feel alive.

I remember that part of what put me off of Hearthstone back when I tried it was the simple back and forth nature of it. You move, they move, you move, and so on. I totally understand why the simplicity of that system was such a big hit, but I didn't enjoy the pacing of it. For LoR, it took me most of the tutorial to wrap my mind around the structure of a match, but now that I have, I really enjoy the flow. Both players take actions multiple times on each other's turns, offensively and defensively. It makes defense feel just as involved as offense, and unless your opponent is using every last bit of the clock available to them, it rarely feels like you are waiting to do something for extended periods of time.

So the weekly rewards were delivered today and I leveled up my reward chests up to level 10 (out of a possible 13?) fairly easily by simply playing a few rounds a day and doing daily quests. Boy, a weekly reward in LOR feels better than a monthly in HS. That's crazy. I was able to craft my first real 'meta' deck

Also, a new patch should be delivered today.
The team communicates it's strategy and thoughts very clearly, this is something I really appreciate considering past experience with similar games.

It seems like just finishing your daily quests should be enough to hit rank 10 and secure an expedition token, which is even nicer when you consider that you can hold up to 3 daily quests at once. So you could only play 2-3 times per week and still easily hit rank 10 on your weekly vault.

Riot has always been great about monetization and community communication. It doesn't at all surprise me that the LoR monetization seems so generous, and I also love how they are narrowing the divide between F2P players and those willing to dump cash through a more generous F2P floor and weekly restrictions on the paying ceiling. I have yet to feel like I lost because I was outspent.

On community communication, bi-weekly patches have been a thing in League of Legends for ages. They carried that mantra over when Teamfight Tactics was released last year. I'm glad to see it's alive and well in LoR as well. Relative to most big developers, they are very transparent with their decision making processes, and they are not afraid to admit fault and make quick changes when something doesn't work.

I've been running with a champion-less Demacian/Ionian Elusive deck for the last week or so, as it was one of the first decks I where I was able to get everything I needed without spending many wildcards. It looks like it was nerfed pretty substantially in this patch (understandably...), so it's time for me to figure out something new to learn!

Tried Expedition mode this week and it was an absolute blast.

First, the drafting is really fun because you get to build your deck as you go. You even have a chance to replace cards.
Then there's the climbing system: you basically can't lose two matches straight. Lose one then win one and you're back on track as if nothing happened. If that isn't enough, if you lose, you get another trial with a clean draft!

The highest climb of the two counts towards your reward. Speaking of rewards, you get a champion card (Hearthstone legendary equivalent) even with 0 wins!
As Dyni mentioned, hitting rank 10 on the weekly quest should be fairly simple and that means a free expedition run every week.

I hit 5 wins on both trials and for a first run, I'm pretty happy with that

Almost all my time playing this past week was in the expedition mode too. It was a blast. I was happy to learn that you can still earn your daily pvp win bonuses and complete daily quests while playing in expedition mode. And since you get a guaranteed champion card at the end of your run, you don't feel like you wasted your entry fee, even at zero wins.

Then there's the climbing system: you basically can't lose two matches straight. Lose one then win one and you're back on track as if nothing happened. If that isn't enough, if you lose, you get another trial with a clean draft!

I think that's my favorite part of how it's constructed. It's so generous. I expected the trial to end after 2 or 3 losses, but instead, it only ends after you lose 2 games in a row. During my second trial, I lost 5 matches, but I still managed to make it all the way to the final battle because I never lost two in a row.

I ended up making it to 6 wins on both of my trials, which really surprised me. I'm pretty confident in my ability to figure out how to use a deck once I have it, but the deck construction is the part where I'm mostly clueless. The way they bundle cards together in themed stages to guide you was really helpful. I ended up constructing Freljord decks themed around Ashe and Frostbiting for both trials. I guess the structure of the drafting phase helped me make decks that were pretty damn good, even with my limited knowledge.

From hitting 6 wins on each trial, I ended up with 2000 crystals, 2/3 of the way to another expedition. Between those winnings and the weekly token, I will likely end up playing in expedition mode the majority of the time.