A place to discuss the now-global coronavirus outbreak.

In the prairies, transplant procedures (as in harvesting them from a donor or in transplanting them) has been shut down because there are not enough ICU beds to deal with it, because they are full due to COVID cases in Texas/Florida-North (aka Alberta, Saskatchewan and Manitoba)

F*CK YOU IF YOU ARE AN ANTIVAXXER!!

A NETWORK OF health care providers pocketed millions of dollars selling hydroxychloroquine, ivermectin, and online consultations, according to hacked data provided to The Intercept. The data show that vast sums of money are being extracted from people concerned about or suffering from Covid-19 but resistant to vaccinations or other recommendations of public health authorities.

America’s Frontline Doctors, a right-wing group founded last year to promote pro-Trump doctors during the coronavirus pandemic, is working in tandem with a small network of health care companies to sow distrust in the Covid-19 vaccine, dupe tens of thousands of people into seeking ineffective treatments for the disease, and then sell consultations and millions of dollars’ worth of those medications. The data indicate patients spent at least $15 million — and potentially much more — on consultations and medications combined.

The Intercept has obtained hundreds of thousands of records from two companies, CadenceHealth.us and Ravkoo, revealing just how the lucrative operation works. America’s Frontline Doctors, or AFLDS, has been spreading highly politicized misinformation about Covid-19 since the summer of 2020 and refers its many followers to its telemedicine partner SpeakWithAnMD.com, which uses Cadence Health as a platform. People who sign up then pay $90 for a phone consultation with “AFLDS-trained physicians” who prescribe treatments such as hydroxychloroquine and ivermectin to prevent and treat Covid-19. The drugs are delivered by Ravkoo, a service that works with local pharmacies to ship drugs to patients’ doors. Of course, that’s if patients ever get the consultation; many customers told Time they never received the call after paying.

The hacked data includes information on 281,000 patients created in the Cadence Health database between July 16 and September 12, 2021 — 90 percent of whom were referred from America’s Frontline Doctors. In just those two months, patients paid an estimated $6.7 million for consultations. The data also includes notes from patients’ phone consultations, which sometimes include medical histories and prescription information.

Roque Espinal, Cadence Health’s CEO, told The Intercept that he was unaware of the scheme and that Cadence Health simply provided a telehealth platform for SpeakWithAnMD.com, its patients, and physicians. “I’m totally flabbergasted. I had to look up exactly who these people were,” he said. “I’m fully vaccinated. My children are fully vaccinated. I’m trying to make heads and tails of this right now.” After talking with The Intercept on Monday, Espinal said he terminated service with SpeakWithAnMD. He added, “I don’t want to be associated with any crap like that. None of that quackery that’s going on.” SpeakWithAnMD’s telemedicine platform, which relies on Cadence Health, is currently down.

“[SpeakWithAnMD] is not part of the anti-vax movement and we do not oppose vaccinations,” Jim Flinn, a public relations agent working for the site’s parent company, Encore Telemedicine, told The Intercept.

The hacker also provided records of 340,000 prescriptions that Ravkoo has filled between November 3, 2020, and September 11, 2021 — amounting to an estimated $8.5 million in drug costs. Forty-six percent of the prescriptions are for hydroxychloroquine or ivermectin, and another 30 percent are for zinc or azithromycin, two other ineffective medications that the SpeakWithAnMD physicians, who America’s Frontline Doctors claims it trains, prescribe in their Covid-19 consultations.

Looks like it's grifters and slimy companies looking to make a quick buck all the way down.

The article also mentions that only $500 of the $8.5 million people spent on drugs were paid by an insurance company. So hundreds of thousands of people decided they would spend hundreds of dollars on dangerous and unproven treatments to own the libs rather than get a free vaccine. That's some dedication.

Stealthpizza
Posted: September 28, 11:27 PM
If I pick a tag then the mods will be able to see me

I will never understand people.

I will never understand people.

I envy you. I understand them all too well and am a cynical motherf*cker as a result. It's not a fun way to be.

It's Yin/Yang. We are capable of some truly amazing kindness and compassion, but equally a shocking amount of cruelty and general dickishness.

Watching the PBS doc on WWI made me feel a little bit better about this stuff though, in knowing that it turns out, we've ALWAYS been this way.

I’ve been shotgunning John Steinbeck novels via audiobook these past few months. Whether he wrote the novel in the 30s or the 60s or somewhere in between…

it turns out, we've ALWAYS been this way.

edit
Come to think of it, Arthur Conan Doyle’s novel A Study in Scarlet gave me this same strong impression. It was published in 1887.

That's a big slope on the exponential curve, previously this week we were in the 800s.

Fed gov has just announced rolling back of covid distaster payment, which when certain vaccination percentage met, only half the level of stood-down assistance for citizens and residents, no assistance for those on student, working visas. Testing positive or being a primary close contact still attracts a payment, not sure about residence requirement on that one.

I got my second AZ shot today. Still, f*ck this.

we've ALWAYS been this way.

It's Yin/Yang. We are capable of some truly amazing kindness and compassion, but equally a shocking amount of cruelty and general dickishness.

Watching the PBS doc on WWI made me feel a little bit better about this stuff though, in knowing that it turns out, we've ALWAYS been this way.

I just finished reading the Great Mortality which shows that humans tend to act the same way in any pandemic. But on the plus side, we don’t have gangs of flagellants murdering thousands of Jews while causing super spreader events. So progress?

I just finished reading the Great Mortality which shows that humans tend to act the same way in any pandemic. But on the plus side, we don’t have gangs of flagellants murdering thousands of Jews while causing super spreader events. So progress?

They swapped out flagellating themselves with eating horse paste, vaping hydrogen peroxide, and trying to DIY ECMO machines.

Instead of gangs murdering Jews, we have groups of assorted crazies and dumb f*cks all psyching each other up to commit mass violence against school boards, public health officials, and politicians they don't like. It's only a matter of time until that damn breaks. (And once it does they'll eventually go after Jews because they always do.)

And they're eagerly attending super spreader events and refusing to wear masks.

So not so much progress.

Going back to the NYT piece on the blue red divide in deaths. That seems to be progress to me.

Sure there's lots of messy sad side effects and or innocent bystanders. A group of people being wilfully ignorant and as a result it's killing them off seems pretty much exactly Darwinism. Maybe it's our own faults as humans to expect we are actually more evolved than animals.

It's only Darwinism if they die before they procreate. Problem is these dumb f*cks are having more kids and earlier than the people smart enough to take a free, safe, effective vaccine.

A lot of times, those kids are smarter than their parents and being held back by the parent's stupidity and circumstances. I don't want to trivialize losing a parent(s), but it is definitely a motivating and liberating act when you begin to emerge from the crippling grief.

Chumpy_McChump
Posted: October 1, 1:56 PM
Not a mistake, an evolution!

I wonder how many stories are out there of the reverse - kids balking at the vaccine after being encouraged by their parents to take it.

I haven’t seen any that I recall, and I’d think that, if they existed, they would be being reported fairly heavily in certain circles.

1. It would be ironic if he lost his life to this and Biden was able to choose someone.

2. Stay the f*ck away from Breyer

Stay the f*ck away from Breyer and be sure to cozy up to Alito and Thomas.

I'm sure the inoculations of misogyny and bro beers will keep him from dying.

Only in a Devil's Triangle with Squee.

If you pre-boof sufficiently, you can boof anything.

I mean Breyer's refusing to step down while they are actually able to replace him with someone that's not a total sh*thead. So... 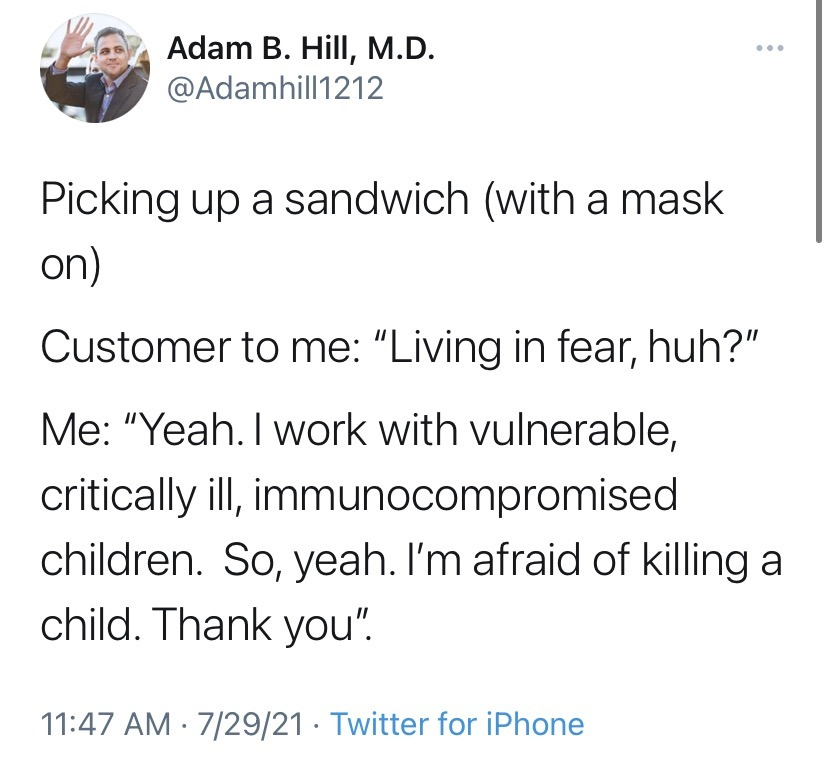 Cripes that hits hard. And I'm so pro mask/vax to begin with...

When I was in hospital I accidentally got most of the way through a shower with a mask on before realising.

Every year is an election year.

Every year is an election year.

Except not facetiously. That's pretty much what Trump embraced when he got elected. Never Stop Campaigning.

When I was in hospital I accidentally got most of the way through a shower with a mask on before realising.

I did that with glasses a number of times. 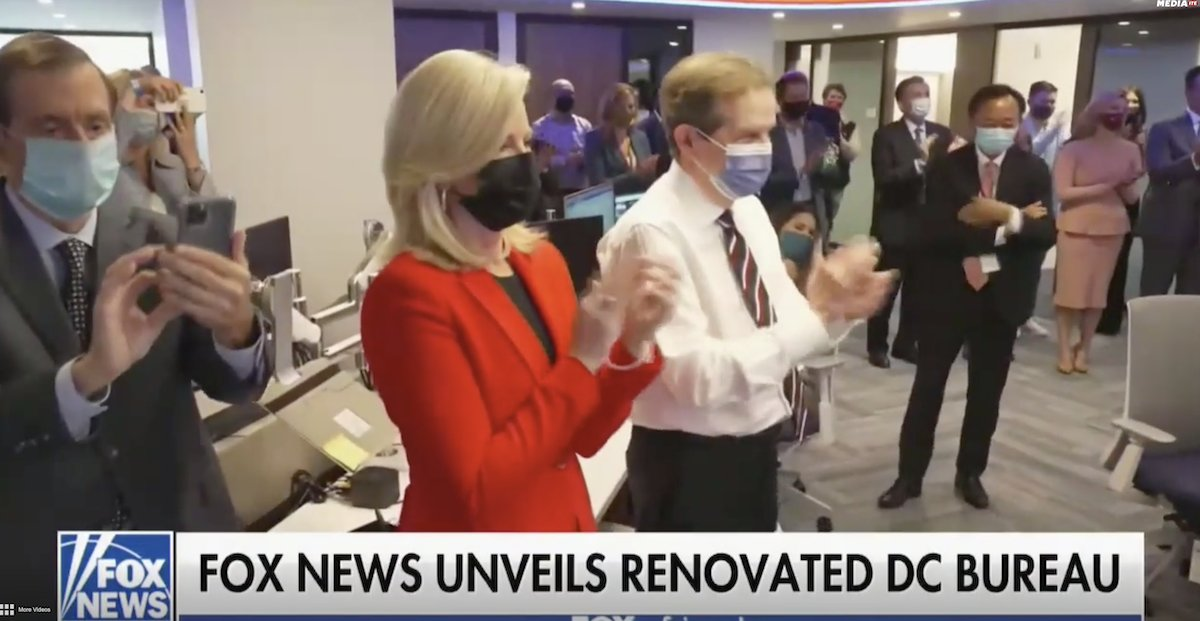 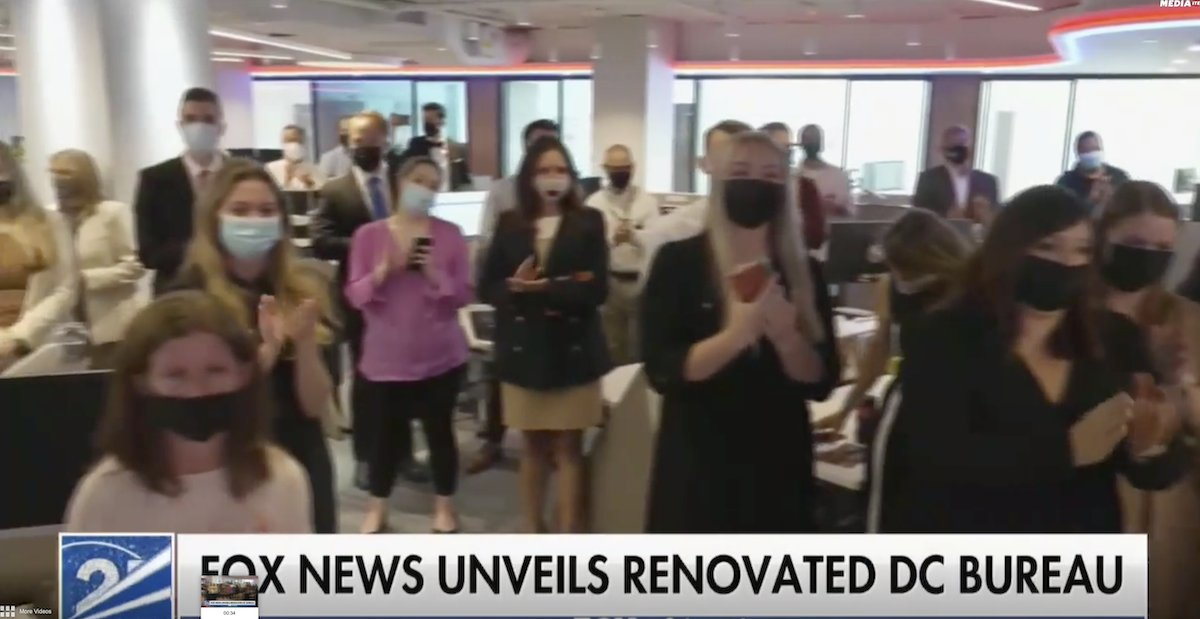