A thread for updates on the various ways the internet is destroying everything and the undying hellsites of social media. Let's all laugh at the abyss.

First OANN and now Nazis? It's like early Christmas on social media.

I think it was only their Wordpress blog, and not Parker itself.

Okay, so now we know that Snopes has been taken over by Q.

That would mean he would give someone else money? Does that sound like Trump? More likely OAN license his image rights and he just skims off the top.

I was going to say...buy OAN with what money?

He'll have plenty of Campaign money from Trump 2024

I was going to say...buy OAN with what money?

He'll have plenty of Campaign money from Trump 2024

Yup, as long as he doesn't concede, he can still scam money out of people who donate to his campaign. And there are lots of people donating who truly believe their $50 will be the $50 that helps Trump uncover the massive fraud that cost Trump the election.

Like most things, debt doesn’t really function the same way for people of Trump’s status as it does the rest of us. Being overleveraged by more than most of us will ever make likely isn’t much of an impediment to his ability to just throw more money at things.

Or Newsmax which is also popular with the crazies*.

*crazies are approaching a majority

Or Newsmax which is also popular with the crazies*.

*crazies are approaching a majority

They’re actually starting to turn on them as well since Newsmax is backing off the fraud allegations a bit and has committed the sin of acknowledging the consensus reality of the battleground states being called for Biden. Last I checked OAN was still going hard on the “Dems are trying to hide that Trump actually won a near-unanimous landslide” narrative.

Strange they'd care what a loser thinks. If only we could make them see him that way things might improve a bit until they find a new avatar of awfulness.

Strange they'd care what a loser thinks. If only we could make them see him that way things might improve a bit until they find a new avatar of awfulness.

What do you mean by “loser?” Trump won in a landslide. /s 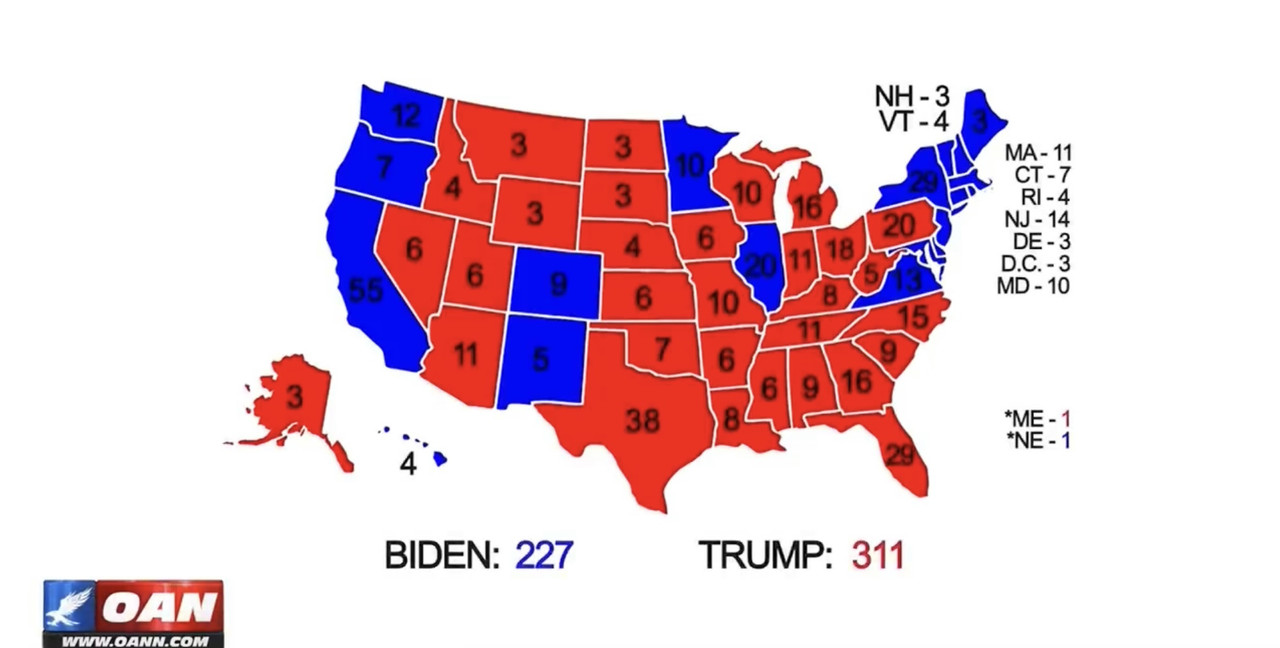 Quintin_Stone
Posted: November 28, 1:21 AM
Not Without Incident

The map I saw from OANN had California turned red.

Yeah, I was just about to say that its not accurate since they gave CA to Biden...
They also gave Trump less than 400 electoral votes so it has to be bogus.

I pulled it directly from one of their shows, it’s their projected map of the election night results “before the Dominion software injected the fake votes.” I’ve seen the other projection where Trump won all but like two states but I found this one first.

Again, the end of that Flat Earth video really speaks to what they're doing. I see it in our inbox every day.

They're trying to beat reality into what they will it to be.

Our parents warned us the internet would break our brains. It broke theirs instead.

The brain-breaking effects of the internet are by now well-documented. Author Nicholas Carr was a Pulitzer finalist in 2011 for his exploration of the subject in The Shallows: What the Internet Is Doing to Our Brains, which remains a landmark work on this phenomenon. "Over the past few years I've had an uncomfortable sense that someone, or something, has been tinkering with my brain, remapping the neural circuitry, reprogramming the memory," Carr wrote in an Atlantic article that inspired the book. "My mind isn't going — so far as I can tell — but it's changing. I'm not thinking the way I used to think." The internet, Carr said, "is chipping away my capacity for concentration and contemplation."

That article came out in 2008, when Twitter was just two years old, a silly place where you pointlessly announced your breakfast, and Instagram didn't exist. Facebook felt innocuous — Carr didn't even mention it in a story about the destructive mental effects of "the Net," an unthinkable choice today. The risks our brains faced then, real though they were, look laughably meager now.

The attention span degradation Carr described has massively accelerated in the dozen years since his Atlantic story published, time in which social media and smartphone use has become ubiquitous. Our habitual distraction is debilitating; "addiction" is often neither too strong a word nor entirely metaphorical.

But it's not only that: The brokenness I'm describing is more than distraction. Carr focused on the medium over the message. "[I]n the long run, a medium's content matters less than the medium itself in influencing how we think and act," he said in his book. I don't disagree, but what we're seeing now is that the content itself cannot be discounted as a potent force of mental disorder and relational discord.

There is so much content on the internet, and so much of it is bad. It is blasting in your face relentlessly. To navigate it well — to discern truth and lies, to parse one's own emotional and reflexive responses, to summon the mental energy to pay attention to credibility and incentives and the small, almost indescribable cues that might indicate whether a piece of content is to be trusted — is very difficult. It is especially difficult for those who have low digital literacy because they did not grow up using the internet.

Time and again I've had some variation of the following conversation with my mother, whom I am worried is drifting from garden-variety low-information folk libertarianism into whatever nonsense she happens upon in the weird dregs of YouTube.

Me: This is really sketchy; I don't think you should read it.

Her: What's sketchy about it?

Her: But why? Try to explain it to me.

Me: Just look at the logo! Look at the way it looks!

Then she sends the sketchy thing to another boomer, who immediately accepts it as gospel, and I know I've failed, but I don't know how I can better communicate what I see. I don't know how a few texts from me can compete, from hundreds of miles away, with YouTube video after YouTube video, each worse than the last, no matter how much YouTube claims to have fixed its algorithm. I don't know how 20 minutes on the phone a couple times a week can carry more weight than her daily grind of content consumption.

It's not just the logo. It's never just the logo. And it's all so obvious to me and invisible to her as to be ineffable for both of us. I don't know what to do.

I too have seen this. My father is retired and has a medical condition, so he's been homebound throughout the pandemic and his amount of YouTube time has absolutely skyrocketed. And while he hasn't gone totally QAnon, I know his digital literacy is next to zero, and lord knows where YouTube's algorithm is taking him from videos of Medieval history and Lord of the Rings lore.

Stengah
Posted: December 1, 9:08 PM
All Things To All Bots

no matter how much YouTube claims to have fixed its algorithm.

Do people actually believe youtube when they say they've fixed their algorithm?

Saw something like that a few months ago: Facebook did to our parents' brains what they said video games would do to ours.

Funny how projection has become so mainstream...

And now I am seeing anti-antitrust ads on the advertising platforms of companies that are buying congressmen with their anticompetitive gains. F*CK YOU, YOUTUBE!

this deserves an old school +1

The singularity is not only real but has been working toward our downfall since at least 2000!

Malor
Posted: December 4, 7:30 PM
Discretion is not the better part of

Seems to be an in-progress thing; I wonder if the neural networks used by social networks are a bit more advanced than they thought?

Currently "reading" (ie, listening) to Carr's The Shallows and I HIGHLY recommend it. Steady your resolve and objectivity lest you fall to despair.

I didn't think it was possible to have a more pessimistic view of Facebook than mine, but that author nailed it.