Compared with the Series X: 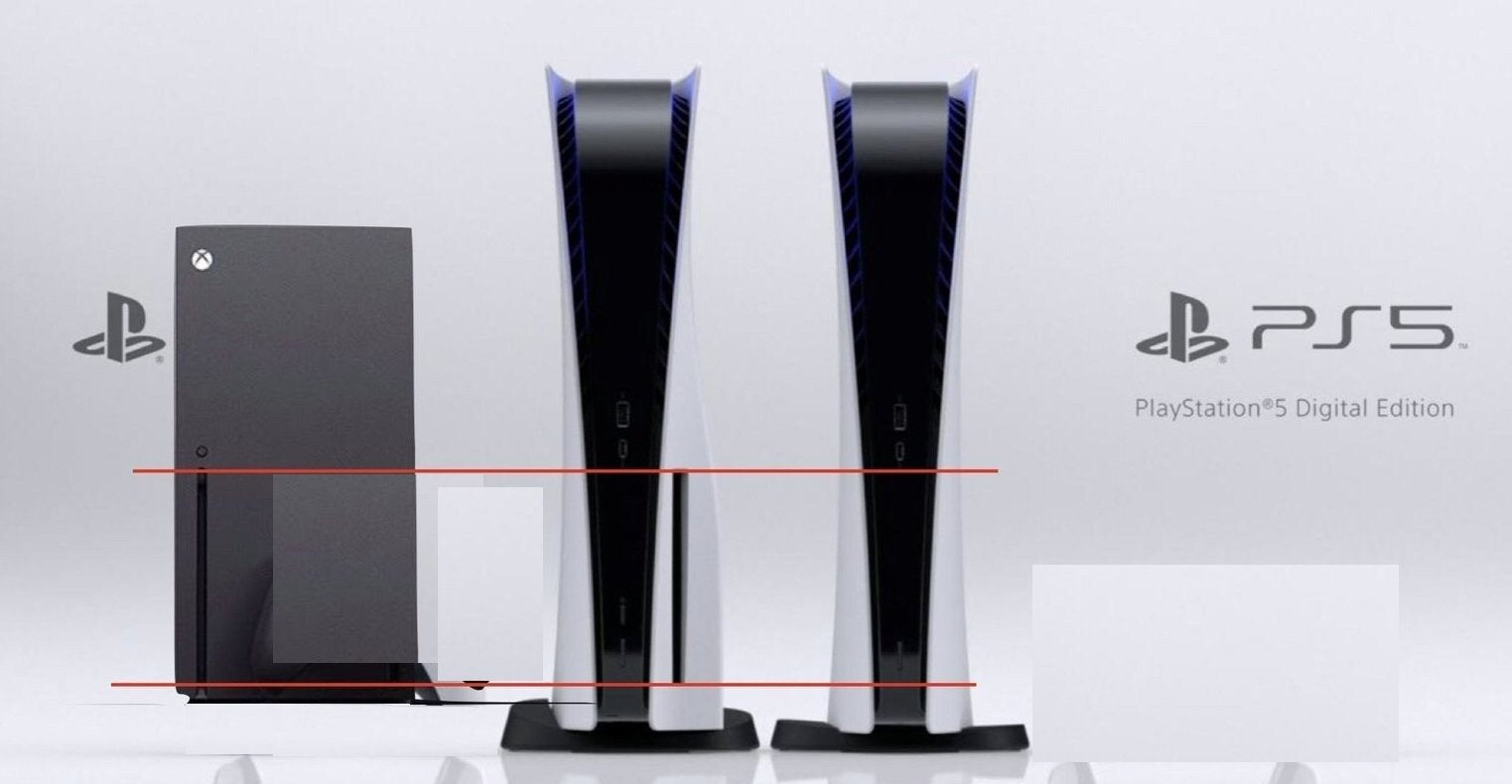 Xbox looking downright modest by comparison, though likely still too tall when laid horizontally to fit in a normal TV cabinet.

I will happily take a big console if the damn thing has great cooling. My PS4 Pro is a noise nightmare. I don't even mind having to find a place to stash it vertical.

I've seen videos showing how badly Sony applies the thermal pads to the GPU and CPU, which result in the unfortunate ear massacre that is the PS4 Pro. Looks not too hard to fix though by applying your own thermal paste. The video I saw also changed the fan, but that's probably not as important.

It varies by game, but mine frequently gets so loud that it's distracting. I'll end up playing games with headphones entirely to block out the fan noise. Ironically, the games most likely to kick the fans into jet mode are the ones that are enhanced to take advantage of the Pro model.

I've actually never had noise issues with any Playstation, PS2 through PS4 Pro. I'm pretty sure I'm not hard of hearing, since I play chamber music when I'm not paying the rent with the day job (or, technically, I played chamber music up until the end of February, when getting together for rehearsals became a really bad idea).

What is the difference between the ps5 and ps5 pro?

There is no pro system announced. There's the standard PS5 with a blu-ray disc drive and a cheaper digital-only PS5 without a disc drive.

Thank you. That was exactly what I was trying to ask about.

I am going to try cleaning my fan tonight and maybe try putting it up vertically. Mine is insanely loud these days. Boy do I love my PS4 Pro, but lately when I am playing Call of Duty, I also put headphones on.

Yeah as my Pro has aged it has most definitely gotten louder. It was fairly quiet the first couple years, but like the last 6 months or so it's gotten really bad. I cleaned the fan which helped a little but not much. Not going through the effort to replace thermal paste or whatever at this point, just trusting PS5 to be significantly quieter.

I have the release PS4 Pro which can get loud. The 2nd gen one is apparently much better. I've thought about changing the thermal paste but haven't gotten around to it.

Stop toying with this terrible idea - new, backwards compatible consoles are a few months away!

Stop toying with this terrible idea - new, backwards compatible consoles are a few months away!

you are absolutely right!

I used to have a glass-door-fronted media tower, but it wound up frying my Wii from heat build-up. At that point I replaced it with a completely open media stand (something like this); technology's gotten hotter and hotter over the years.

Never had that problem. But did go with open when I bought the last one because the previous one in our furnished apartment with glass didn't have enough room for my sound system years ago. Couldn't close the doors.

Now that I have a toddler walking around and trying to grab everything I wish I had doors again.

We have some modular plastic fences, about 3 feet tall, that we used when house training our dog years ago. I've used them to fence off the entertainment center and also the Christmas tree.

I normally don’t focus too much on the appearance of the console, but the size of the PS5 does give me some hesitation. I have a PS4 Pro and it’s about as big as I want a console to be. If I pick up a PS5 before a redesign, I’ll definitely have to do some rearranging of my current setup. I can’t just plunk it down where the Pro is.

I am still not ready for 100% digital.. As a collector, i like to own my games in physical form

With so many titles coming with huge Day One patches as well as regular updates for months after, owning a physical disc for preservation purposes seems less and less relevant these days.

I think file sizes and hard drive save will determine if I still want to get physical editions of games. I've practically stopped entirely purchasing discs for PS4, but I did go through the trouble of upgrading my hard drive to store more stuff. I can't help but wonder if an all digital approach with PS5 will still be better in terms of gameplay though. I guess I'll just have to wait and see.

Does the PS4 actually read anything off the disc during runtime? I know the Xbox One doesn't. The entire disc is installed to your HDD, so there's no space savings by getting physical copies.

No, it installs the game from the disc, then plays from there. So long as you have decent internet access (and the US lags embarassingly behind many, if not most, developed countries in that respect), the main argument for physical media is that you can usually get used games for cheaper than downloadable games. For Sony, the even stronger argument for the Digital Edition is there's no such thing as a resale market, so they get a cut of every downloadable game sold, on top of the license they charge just to be available on the Playstation.

Given the financial advantage a no-physical media console has for the owner of the walled garden, my expectation is that Sony will price the Digital Edition PS5 at pretty close to the cost of manufacture, and likely they'll take a loss on it (at least initially). They'll then charge $100 more for the version with a disc drive, even though the drive only costs them less than $20. It's a ridiculous markup, but it will drive customers toward the console that Sony makes more money on long-term. Things are a little weird this launch though, since a) many people have to be far more budget-conscious, b) manufacturing is down which drives up the expense of sourcing parts and drives down the availability, and c) in the last few months more people have gotten onboard with online purchasing of console games. It's hard to know how much any of those factors will affect this distinctly unique launch year.

That said, my intention is still to buy the "Analog Edition" version. I like having physical media, and since I never play multiplayer games I usually wait to pick up games on sale. Bonus: since I still have all my discs from the PS2–PS4 era, I can play pretty much every Playstation game I ever purchased, thanks to a backwards-compatible PS3 and the future PS5. 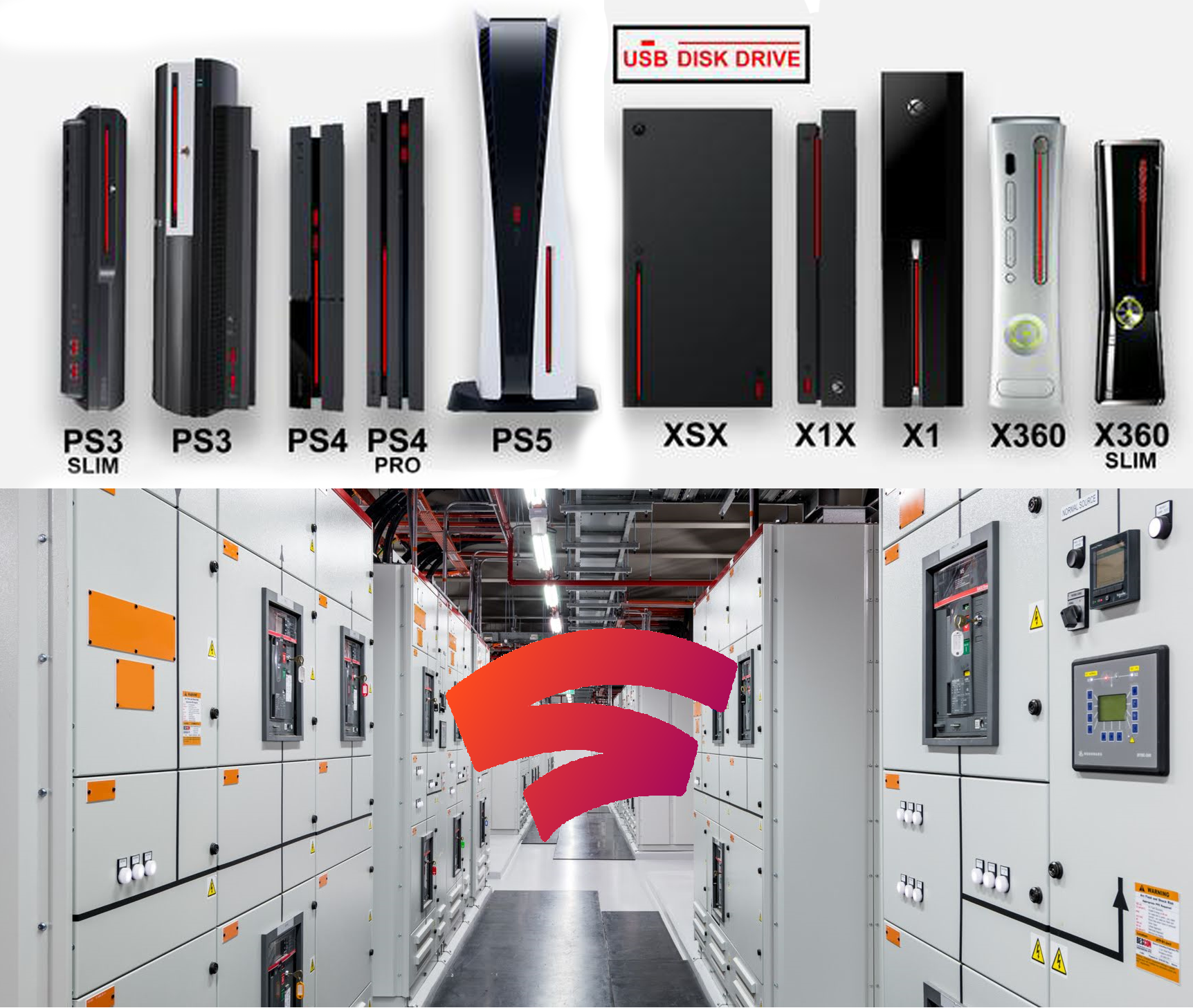 This looks like a raptor should come leaping out of the ceiling any second.

They'll then charge $100 more for the version with a disc drive, even though the drive only costs them less than $20. It's a ridiculous markup, but it will drive customers toward the console that Sony makes more money on long-term.

Sony will get them for cost - so a bit less than that, but current speculation is the difference in cost between the two PS5s will likely follow the precedent set by the Xbox One Digital Edition and be ~$50.

This one's my favorite:

With so many titles coming with huge Day One patches as well as regular updates for months after, owning a physical disc for preservation purposes seems less and less relevant these days.

I've always seen physical disc copies of my games as the freedom to sell them once I'm done with them and get some dollars back. Sometimes I can get a good chunk of my money which lets me buy more games.
There are a few games--in physical disc form--that will stay permanently in my home.

While I'm ready to buy all games digitally from Sony like I've done with Steam for a number of years, I'm not quite sure if I'm ready to let go of having discs as an option.

If the price difference is really only $50, then I'll probably get the disk one, just to have more flexibility, even though I don't expect to use it.
I'm a 100% digital purchase person, and have been for years. The only time I get a physical copy is when I specifically want a collectors thing.

I'm in a weird space where I've been getting digital copies because space is an issue, as well as easy access for disc swapping. I don't have a lot of personal space at the moment so digital has been the ideal way to go. To that end, and for aesthetic purposes, I think I wouldn't mind the digital edition.

At the same time, I don't trust the industry's capability to preserve games, especially the bigger publishers, and therefore want to get physical when possible.

It's a matter of immediate convenience versus long-term risk.

The 4K Blu Ray player is the incentive for me to get the one with the disc drive. I've been going more and more digital as well when it comes to games, but I'd still like the option to watch 4K media.

The 4K Blu Ray player is the incentive for me to get the one with the disc drive. I've been going more and more digital as well when it comes to games, but I'd still like the option to watch 4K media.

I still like buying movies and the combo packs are usually the same price, so I have a handful of 4k movies waiting for a player.

Uh-oh. Sony says that with the PS5, they're focusing on "value instead of price".