Didn't even do a thumbnail for page 5. It will be a text-heavy page, so I kept it simple: 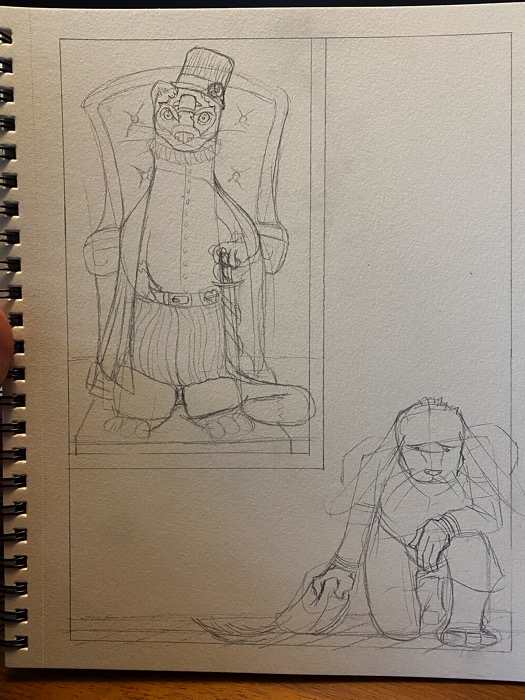 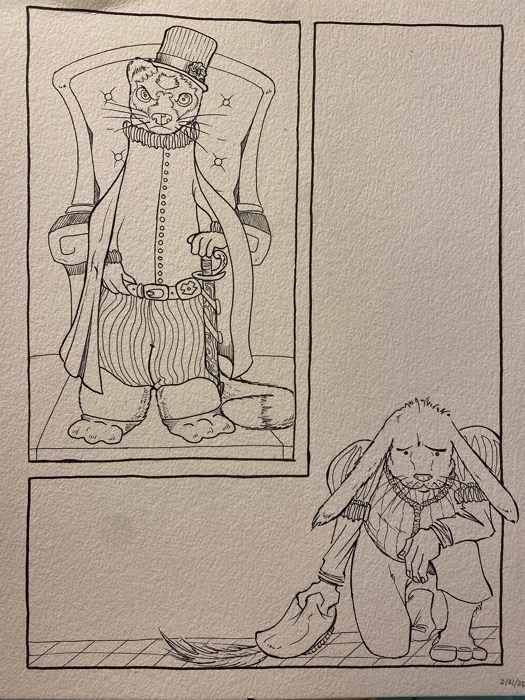 Only one page left!

I've been trying to figure out the plot to your story, Mario. I'm imagining that the cartographer rabbit hare took a lot of money to go abroad and map some distant land, but ended up spending the money on things for his home/shop and now has to justify it to his patron. Or maybe something entirely different!

Apropos of nothing, here's an angry woman: 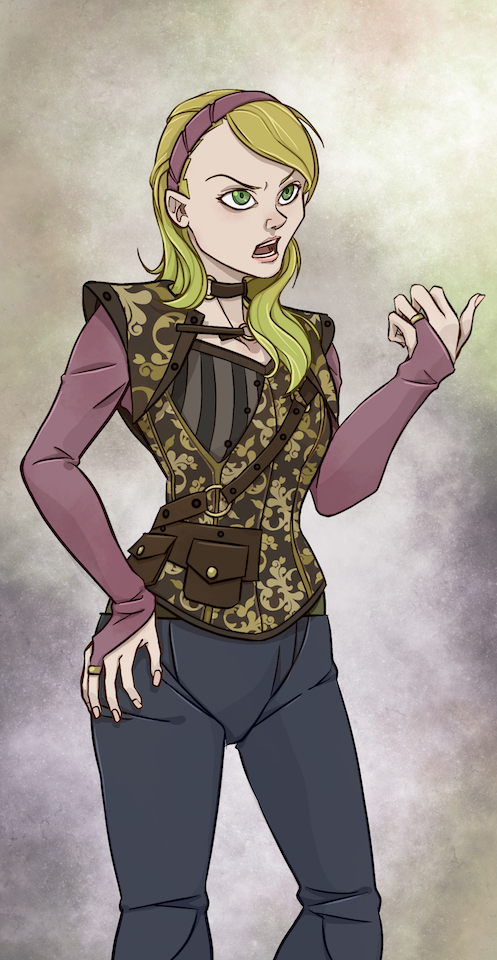 (Oh hey, I finally made Office Linebacker! At my current rate of posting, I'll get my own tag sometime around the end of this decade! Man, I need to go play more videogames so I've more to post about.)

LOVE your angry woman, Ravanon! The face, the hair, and the body language are great! I like her clothes too, and that pattern looks really cool.

As for my story, I like your version! Basically the cartographer has had no business for a while and his wife is telling him he has to accept whatever job comes his way... and then (conveniently) the king calls him to give him a very unexpected assignment.

Without the text, not much of that is clear, and most of that will be explained on the last two pages, which is why those will be packed with text. And talking about the last pages, here's the pencils for Page 6, the very last one of the chapter: 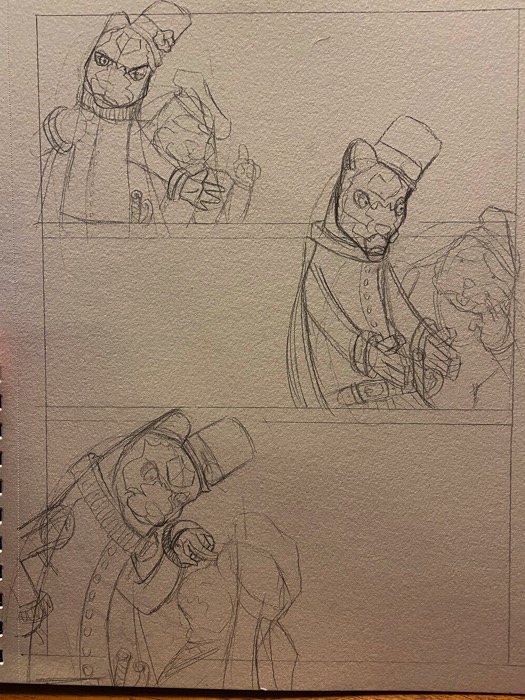 Not a very effective cliffhanger without the text, so you'll just have to be patient.

Also, no thumbnail for this one either --I went straight to the page after trying different ideas in my head on the drive back from school. Let's see how the inks turn out!

PS: Oh, and congratulations on making it to Office Linebacker! It took me several years to get my tag too, but it's not as if I post all that much, especially for the past couple of months when I've been drawing instead of playing games!

Apropos of nothing, here's an angry woman:

Been lurking a lot without comment, chiming in to say that I always enjoy your stuff but your recent work has been particularly fun to see.

(Oh hey, I finally made Office Linebacker! At my current rate of posting, I'll get my own tag sometime around the end of this decade! Man, I need to go play more videogames so I've more to post about.)

I'm six months from my 19th anniversary of joining the site and I just hit Executive. I feel ya!

Here's a rare work-in-progress shot with the obligatory pens and brushes around the drawing: 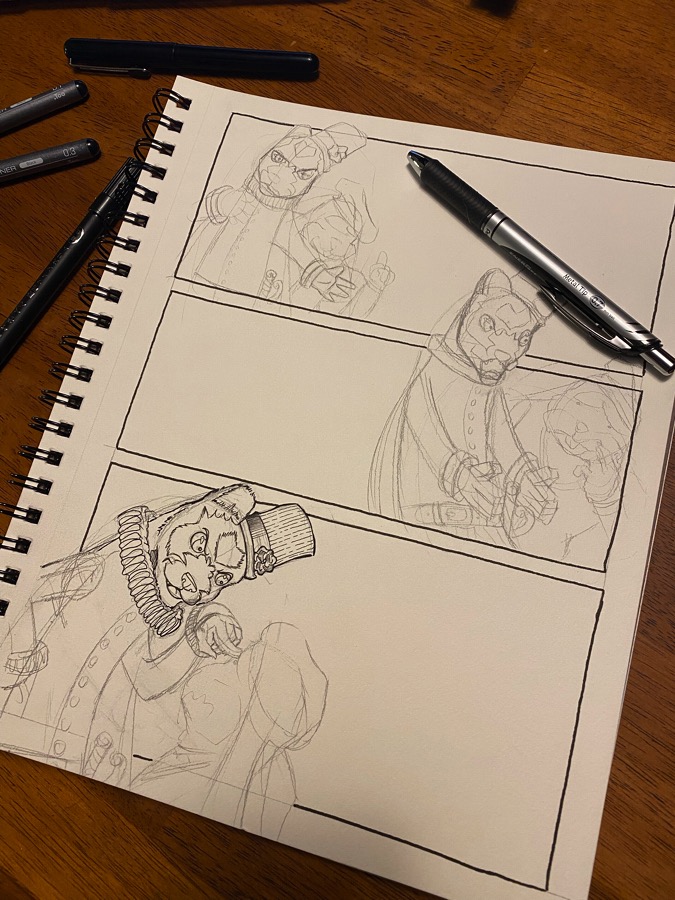 I had to stop to have dinner last night, but I hope to continue (and finish) it today! 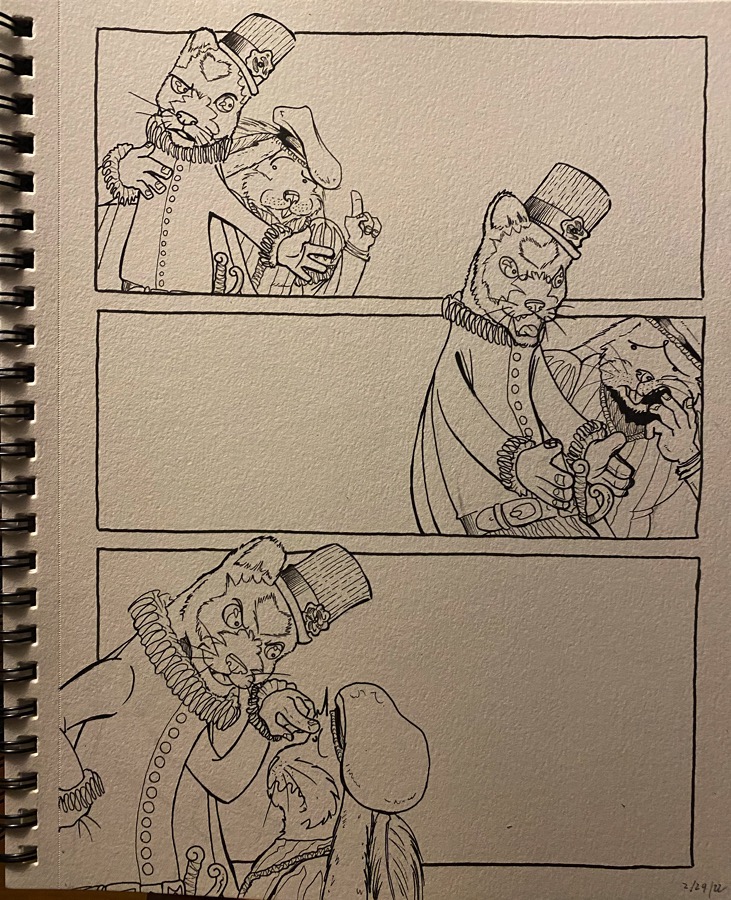 Now I need to color the whole thing... but I'll probably start drawing the next story instead, which I am thinking will only be four pages. Let's see if I can get some thumbnails done this weekend!

LOVE your angry woman, Ravanon! The face, the hair, and the body language are great! I like her clothes too, and that pattern looks really cool.

Been lurking a lot without comment, chiming in to say that I always enjoy your stuff but your recent work has been particularly fun to see.

Thanks for the warm responses!

Oh and Mario, while I like seeing your work, I believe that's two stories now you've drawn out without going on to add the script to actually reveal exactly what's going on. That kind of teasing shouldn't be allowed

Hahaha. Ok. Maybe I'll do coloring and lettering sooner than I was planning.

Actually, I might be doing some coloring this weekend after all, mwhahahahaha! 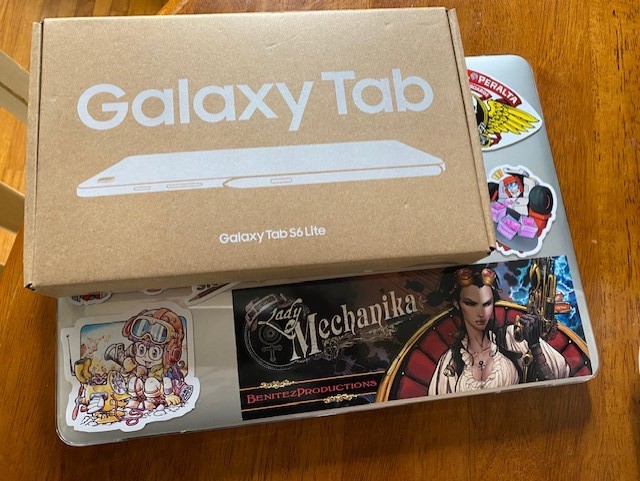 I'm so excited to try it out!

Awesome! I know I am not alone in waiting to hear impressions and see the results

I'd also love to hear your thoughts on Sketchbook, Krita, Clip Studio, Concepts and the like...

Well, I just finished setting it up and drew my first masterpiece: 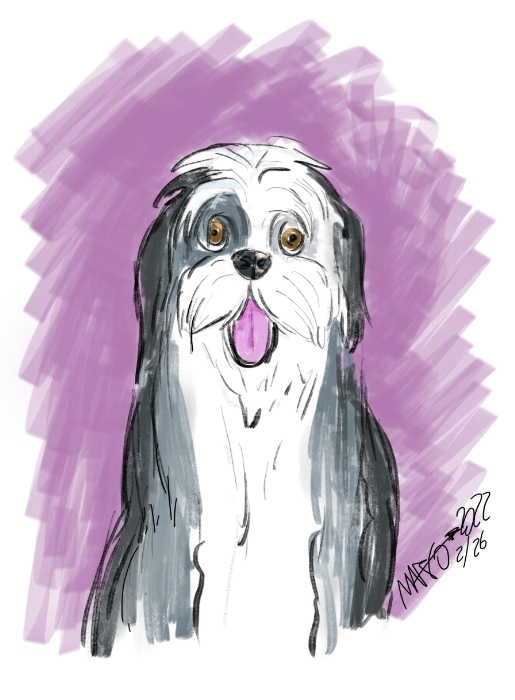 (This is Duncan, one of our five dogs. Yes, five.

I LOVE this thing!
I had only ever drawn on my old Cintiq, which I had had since 2011 or 2012, and boy has pen technology advanced in the past ten years!

I found the S Pen to be very responsive, and I had a blast doodling.

I drew Duncan on Sketchbook. I downloaded that app because it was free, it had good reviews, and I actually have it on my Mac and have enjoyed it for years. Since I was familiar with the interface already, it seemed like a no brainer.

I might get Clip Studio at some point because I also have it on my computer, but I've never used it enough to warm up to it, so Sketchbook was my first choice. I'll have to try more apps, I guess, but I'm the kind of person that sticks to what he knows works for him, hahaha.

Finally, I really had a lot of fun drawing on the S6. I love the size and the portability, which is exactly what I wanted. I just got it out of the box, sat down at the table, and sketched away: no cables, no cords, no bulky anythings. It really couldn't have made a better first impression!

Now I need to go scan the first story of my anthology, Unknown Shores, and start coloring it. Let's see if I can get at least a page done by the end of the weekend! As I said, it will be very simple coloring, so don't expect anything too elaborate.

Sketchbook has recently bought themselves out from under the yoke of Autodesk IIRC.
So you may want to throw them a donation or however they support themselves.

I too found it to just be the most "fun" drawing app out of all the cheap and free versions I tried.
Concepts was interesting for a drawing app based on vectors. Seems like an app based on the blob brush in Illustrator that I love.
Clip studio was not out yet for mobile when I had my s6 lite. I have yet to give it much go after buying it on PC either.
Procreate didn't really leap out at me for all the hype it gets.

But Sketchbook was like opening up a coloring book for me where I can line out whatever suits my fancy and then have fun actually coloring. (by hand, not using flood fill)

But Sketchbook was like opening up a coloring book for me where I can line out whatever suits my fancy and then have fun actually coloring. (by hand, not using flood fill)

Yes! I also color "by hand" for the most part, which takes longer but I enjoy way more than just click-click-clicking. Which reminds me, I've finished coloring the first page of Unknown Shores. I just need to add the text and I'll post it here. 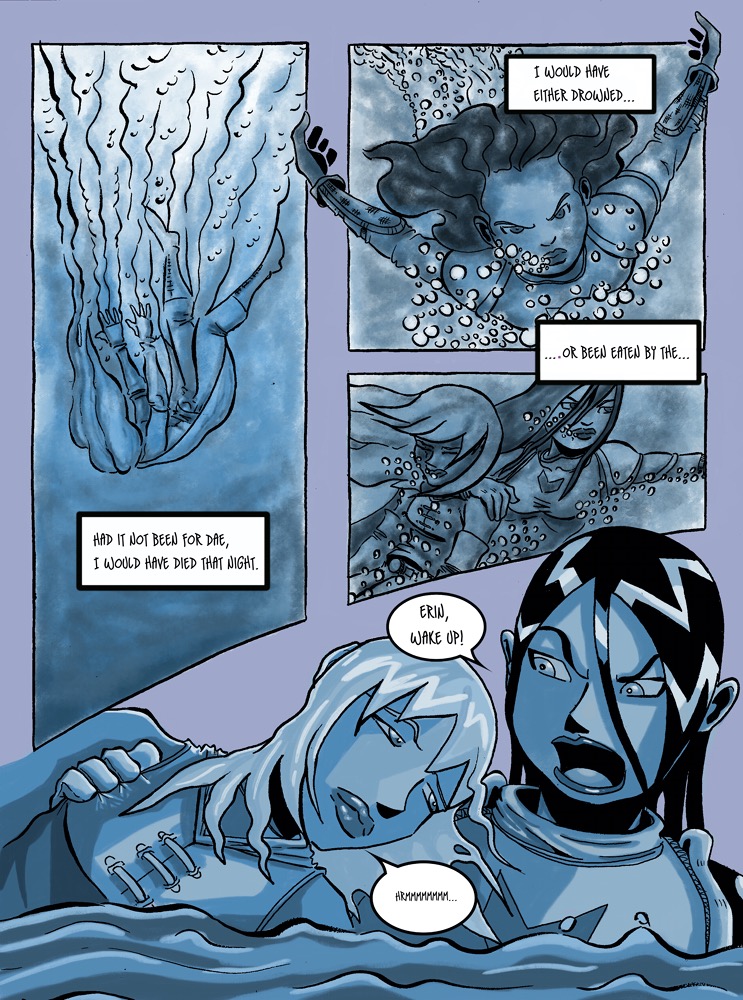 Yes! I also color "by hand" for the most part, which takes longer but I enjoy way more than just click-click-clicking.

My favorite thing that I know this isn't a show stopping secret technique, is I love adding layers below the line work to color different pieces or for different colors. It is SO cathartic to "hand" color. 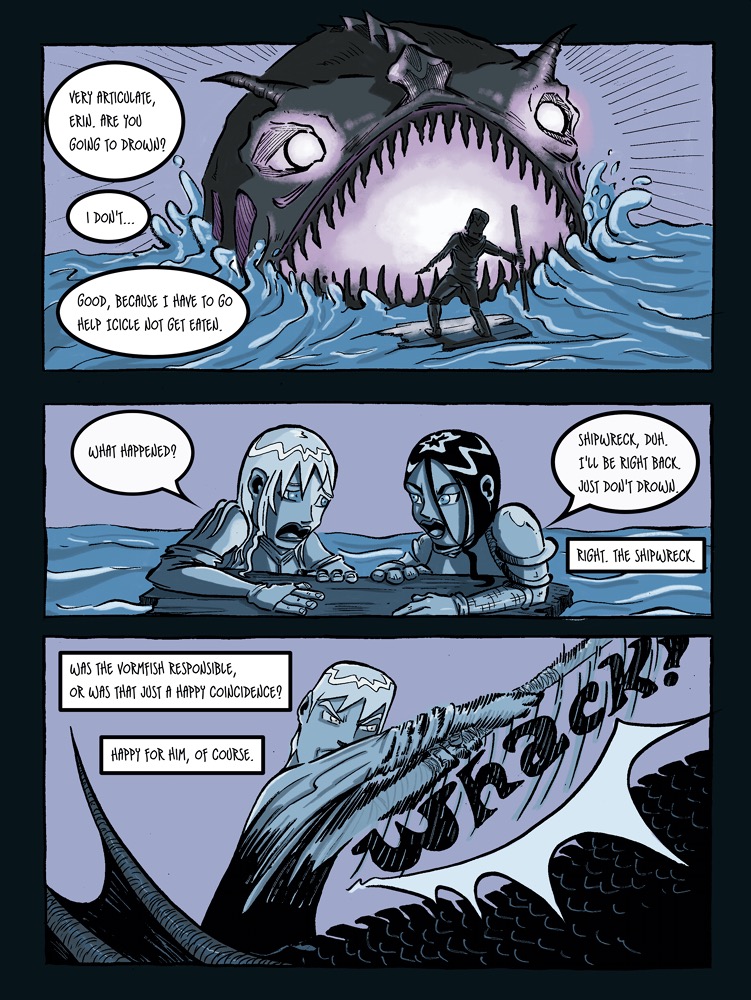 I don't think I'll be able to finish Page 3 tomorrow, but maybe in a couple of days?

This is all done on your new tablet?

That makes me so happy

All the coloring, yes. I'm using Clip Studio on my computer for the lettering. But let me tell you, I'm having such a blast with the tablet, sitting down to color is the only thing I can think of all day long. While I'm at work I keep thinking "When I get home, I'm going to start with this panel, and then..." So much fun! 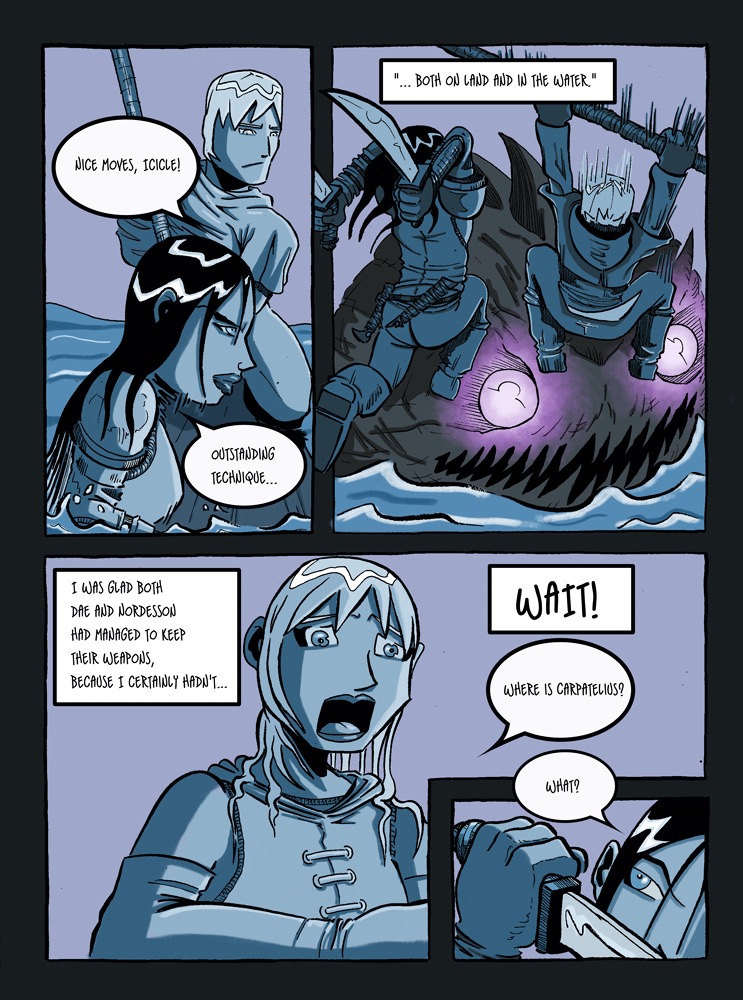 Page 4 won't be done until Saturday most likely, but I'm still happy with my productivity!

They are really come to life now!

Some nicy moody colouring there. It's always nice when you have a new piece of technology to play with.

I've been mainly busy this week creating tokens for my latest D&D character for use on Roll20. This is Endymion, the Amethyst Dragonborn Bard (of the College of Spirits). Yes, this is the most ridiculous character I've played in a D&D game (I'm usually more conventional, playing half-elves and gnomes and such). 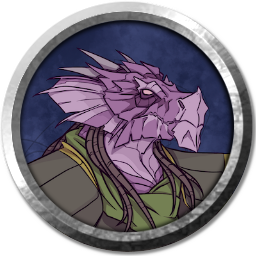 Coincidentally, it's something of a pain once you set the precedence of drawing your own characters rather than just cribbing artwork from online—but it becomes something of a point of pride as well.

Okay, a rare double post for the hell of it, and to slightly boost my post count.

I've also been trying to be more rigorous about how I design outfits for the characters I draw—I have a bad habit of just slapping together elements that kind of work as I draw, with no regard for how things would (for example) join up at the back. So I've started drawing up some 'tailor's dummies' for use in designing clothes, armour, etc. Which immediately got me into a rabbit hole regarding anatomy, which I've only been getting to really understand somewhat belatedly.

In any case, here's a first prototype 'design', just playing around with far more straps than would realistically be comfortable. This exercise immediately identified some problems for me to consider for next time, so I guess it's not a total waste of time. 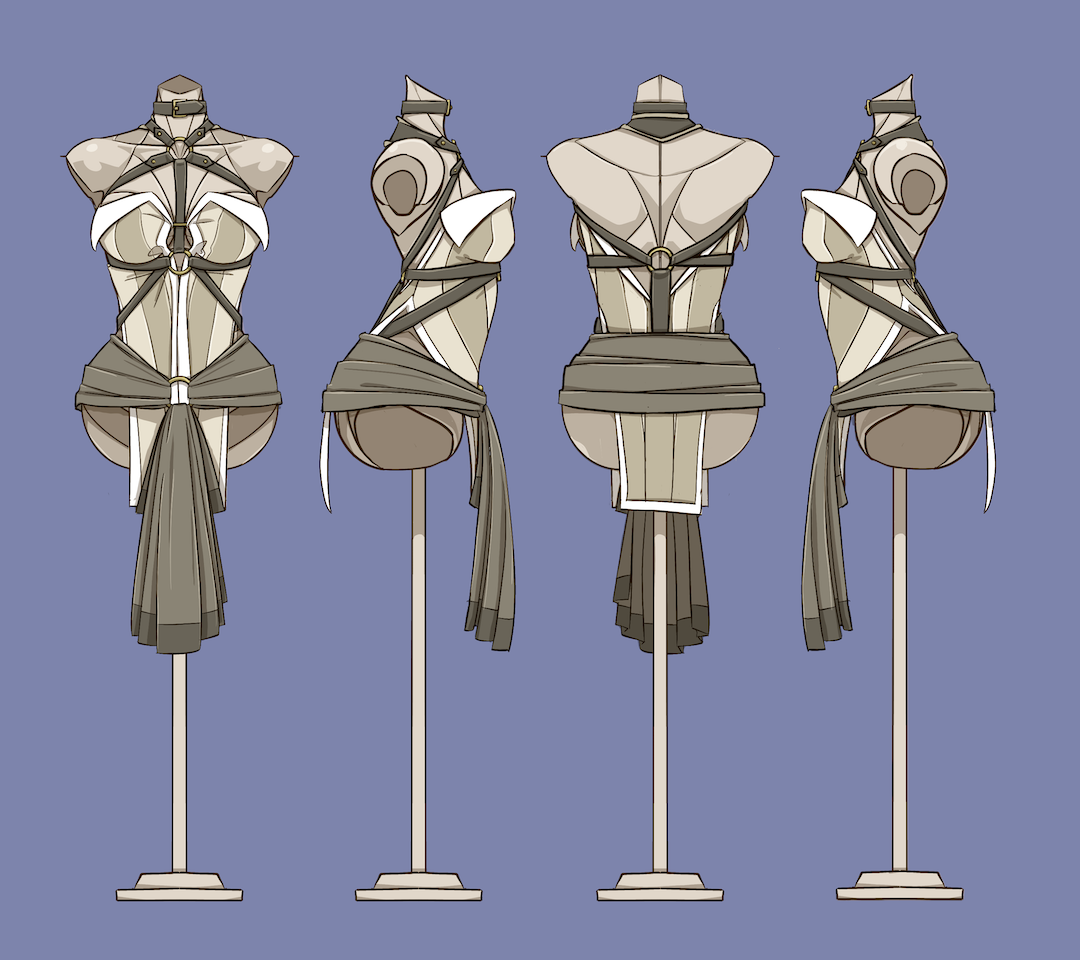 I do not recommend this outfit in reality.

I love that.
I have dreamt of designing clothing for a long time. I really don't see a difference between character design and fashion design. If anything, character design adds another layer because you are designing your model rather than hiring one or using a mannequin.

Both drawings are really cool, Ravanon! And the one you posted on a different thread as well. 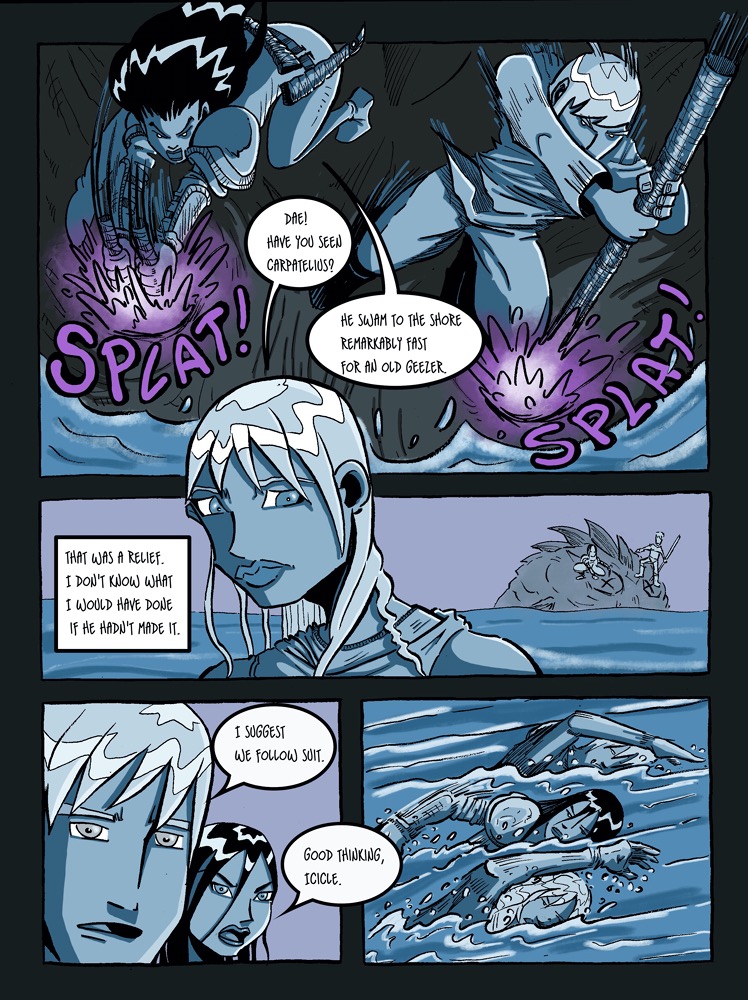 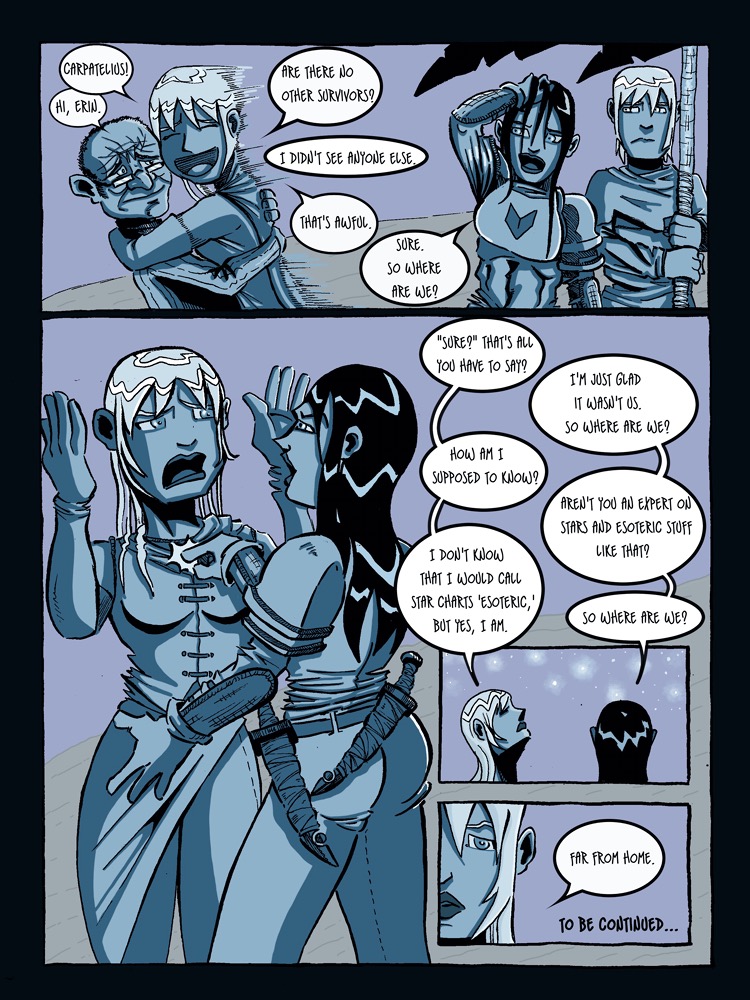 And here's the thumbnail for page 1 of "Ghosts of Inverness," my next story: 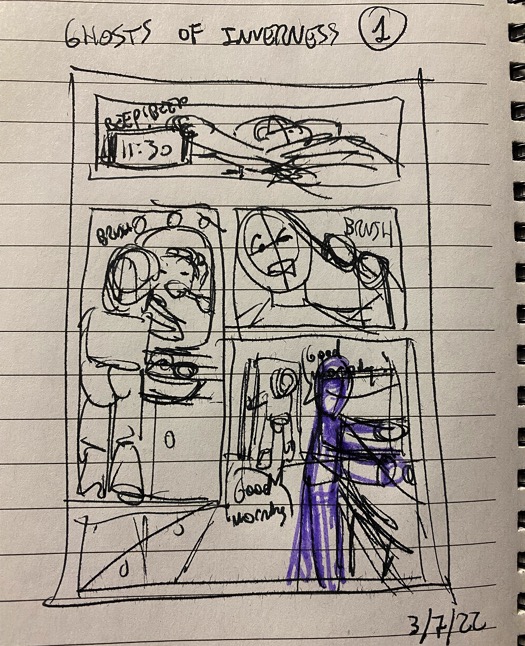 This one will only be four pages, I think. 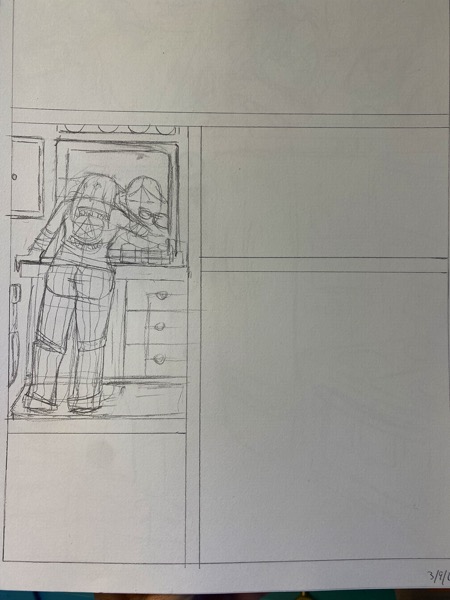 Then, as I was reading in bed just before falling asleep, I decided I hated it, so I started over today: 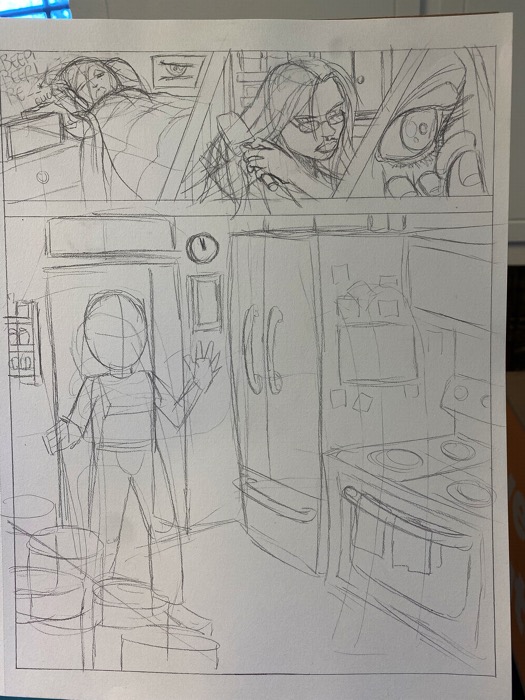 I think it was the right decision!

We end the weekend with a bang! Here's the finished first page of "Ghosts of Inverness": 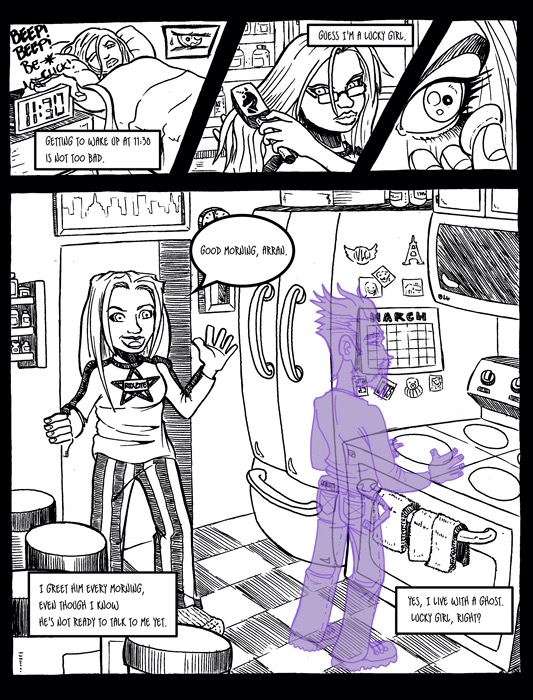 My ambitious goal is to try to do the remaining three pages this coming week. We'll see what happens...