Soooo... is Inktober52 "cancelled" now that they're (Jake Parker) about to fight a plagiarism battle (raised by Alphonso Dunn) on the Inktober book about to be released? I was checking for the latest prompt and the comments pointed me toward the absolute s*show that is that whole thing...

Whaaaaaat? I haven't seen any of that stuff! I'll have to go check it out! Was there a prompt today? I've been at work all day and haven't been able to check.

As for what we use to draw, for the most part I draw on paper, but when I go digital I use a Cintiq and either Photoshop or Sketchbook. I bought Clip Studio a couple of years ago because it was on sale, but haven't used it yet. Shame on me, I know.

Edit: The prompt is "balance."

Yeah, the video by Dunn is pretty damning. Not loving the apparent theft of a POC’s work for a major creator’s commercial product.

I've started watching the video, but I'm only about 6-7 minutes in.

Yep, saw that earlier. NOT a good look.

I don't think i'll be using the guy's official prompts going forward, but Inktober as a concept is worth continuing. PLENTY of other october lists to use instead. Most of them better than the random list he puts out anyway, tbh.

FWIW, i'm going to be doing my dungeon map thing again this october i reckon, unless i come up with an even better idea in between.

I don't think I'll have time to do Inktober this year, but I'll try to continue with Inktober52 if I can find the time. It's going to be a rough semester!

Anyone use an android tablet for their drawing? If so, what tablet and what apps?

Clip Studio Paint has been released on android. The kicker is that it is Samsung exclusive for 6 months. But, the good news is that Samsung has the best android tablets anyways.

I ended up not keeping my galaxy tab s6 lite but it was a dam fine tablet and I may just buy it again.
The new tab s7's are supposed to be ipad pro killers and priced accordingly.

Instead of rebuying an s6 lite, I am tempted to spend another $100 and replace my phone with the galaxy note 10 lite. My current phone is a Oneplus 1

So I can better justify killing 2 birds with one phone...

FWIW the s6 lite had a matte screen and a better drawing feel than non matte screens I tried. It is super cheap too. ($349 with pen)

If you have a laptop, I'd seriously look into getting a huion qm60 (sp?) wireless drawing pad as a much cheaper portable drawing solution. You can get bluestacks android emulator if you want access to the android ecosystem. I run a droid sculpting app Nomad on it and it works great

Another option is that many pen displays will also work with some android phones.
You can get a quality 13.3 in pen display for under $300.

But after all this experimenting, the best drawing feel for me was with a drawing pad. It oddly felt more natural than drawing directly on the screen whether ipad, tab s6 , laptop touch screen, or pen display. The feel felt most like drawing on paper. It was a lot cheaper and in the case of that qm60, wireless meant the ultimate convenience of going cable free and battery free on the pen!

I picked up a 7th gen regular iPad on sale (279) and an apple pencil (95). It feels good, it's a little tappy because it doesn't have a laminated screen.

I am considering the Samsung Galaxy Tab S6 lite (on sale with the pen and more storage for $299). On paper, it's better than the 7th gen ipad in almost every single way. It has a laminated screen.

It looks like the Procreate app is sort of the killer drawing app on a tablet.

Have you used an ipad/pencil before fang? How do you think the samsung s6 lite and s pen compared?

I have absolutely no time anymore, so I decided to sneak in a quick sketch for this week's "balance" while my students worked on some assignment. I didn't do any preliminary pencil sketching or anything --I just grabbed a black pen from my Darth Maul mug and drew the thing. And then, to make it look even better, I grabbed some highlighters from my Darth Vader mug and colored the whole thing. A masterpiece, I say! 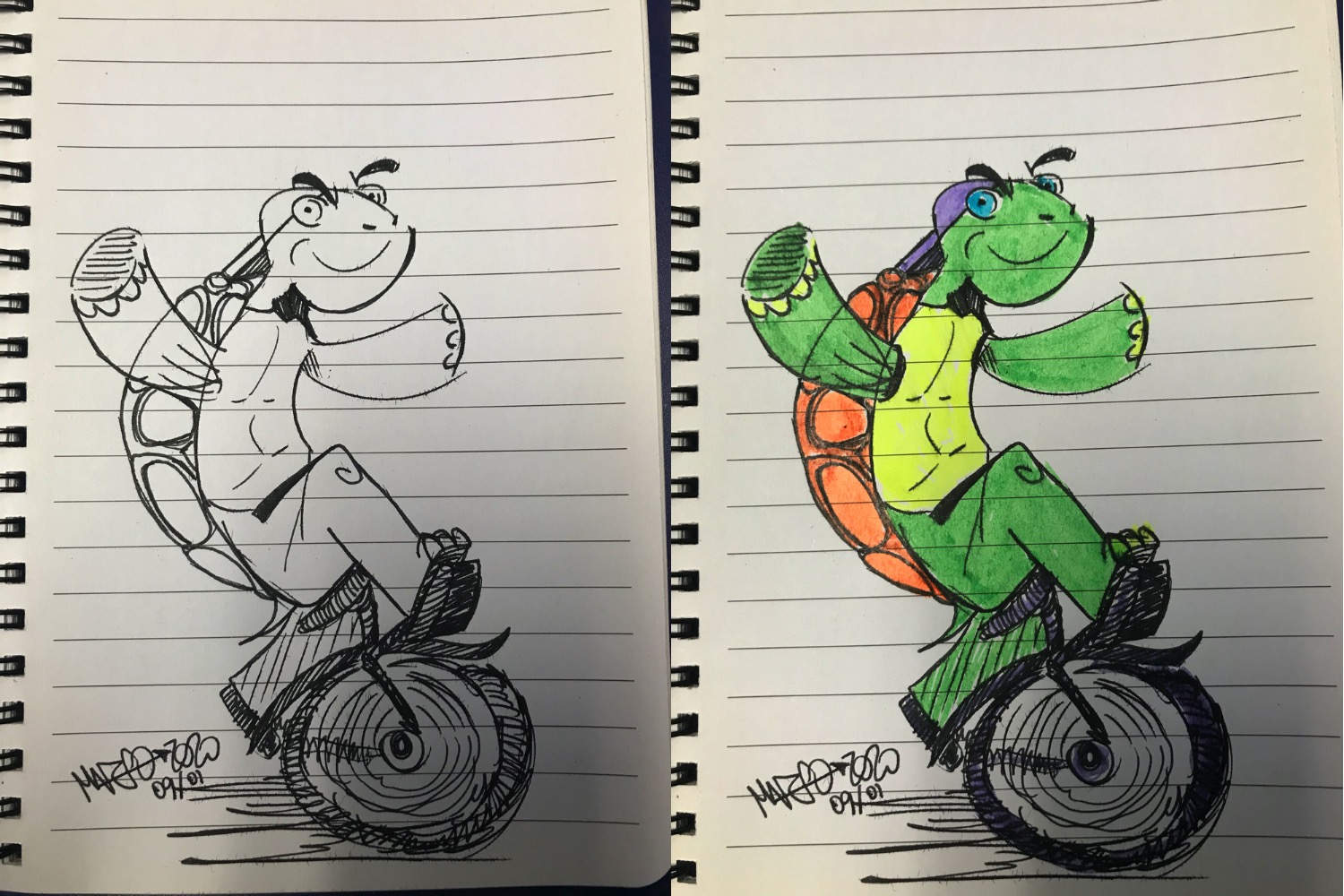 So, where do we get prompted or how do we know what the week's theme is?

For the weekly prompts we've been using the Inktober 52 list. In principle, signing up for the Inktober mailing list will get you the prompts in a timely fashion—I'm not sure any of the regulars on this thread have bothered (I certainly haven't). For myself, I usually check the Inktober twitter feed on a Thursday evening (I'm in the UK mind), or if the prompt hasn't appeared there, the Instagram page. Or I just let Mario tell me on the thread. I'm lazy like that.

So it's been "balance" this week. Since Thursday evenings are currently my most convenient time to get some drawing done, I'm usually still working on my image when the next prompt arrives. I expect this week to be no different.

Regarding the plagarism thing, I'm not exactly thrilled, but I haven't had the opportunity to watch Alphonso Dunn's video and I'm seeing more back and forth of opinions now online. Lacking any really knowledgeable perspective on the matter, I'm waiting to see how it pans out. We've been using these prompts for our own purposes here anyway, so I guess we could always find another source of semi-random cues if we collectively decide to avoid Jake Parker's prompt lists.

On a related note, it can't possibly be close to October already.

Mario_Alba
Posted: September 2, 10:43 AM
Always late to the party

As for the prompts themselves, my plan is to continue with them for as long as I can, but I'm not married to them, and since most of the fun is seeing what other people here come up with, if everyone wanted to try something else, I'd be up for that too.

On a related note, it can't possibly be close to October already.

Yeah, it's insane. My wife and I always joke about the fact that "next thing you know, it'll be Halloween," no matter what time of the year it is at that particular moment, but it is true --time flies! And talking about October, the official Inktober prompt list by the now controversial Jake Parker was posted yesterday. I think I've said this before, but I doubt I'll be able to do it this year, which sucks, because I've done it for the last five, even though I've only used his prompts once during that time. But if I can at least keep the weeklies going, I'll be happy.

So, I bought both an iPad 7th generation with Apple Pencil, and a Samsung Galaxy Tab S6 lite with S Pen. I'm trying to see which I like more for drawing and I'll return the other one....maybe.

Have you used an ipad/pencil before fang? How do you think the samsung s6 lite and s pen compared?

I ended up returning both to get a drawing pad which works better for me. FWIW, despite apple having a better ecosystem, I would rebuy the galaxy tab s6 lite before the ipad. I think the apple eco system is over rated, but then again, I have a windows laptop. I didn't feel the ipad made me more productive or able to do more professional work despite having more options and a better feel. And android has clip studio paint now.

I feel like it boils down to whether the artist feels they can do professional work on an ipad. Many do, though it seems they tend to spend a fortune on the ipad pro. I don't. If you do, then there is no reason you won't be able to do professional work on the galaxy tab as well now. But you certainly won't go wrong if you stick with the ipad. The popularity of the tab s7 will renew interest in android apps as well. So expect less ipad exclusivity in the next 6-12 months.

While I have both devices, if anyone has any questions or anything, by all means ask.

Tell me what you think of procreate.
The first thing I did was install it and a bunch of other drawing apps like sketchbook. I had already tried medibang, ibis and infinite painter on android. I will be honest, I chose to work with sketchbook on both android and ios. The only other app that seemed interesting to me was concept.

So I liked procreate and every one of those other apps had something interesting and unique to offer. But what I've chosen to actually work with is sketchbook, clip studio, affinity designer and even krita.

For myself, I usually check the Inktober twitter feed on a Thursday evening (I'm in the UK mind), or if the prompt hasn't appeared there, the Instagram page. Or I just let Mario tell me on the thread. I'm lazy like that.

Hey! You're not supposed to announce it before I manage to post something for the previous prompt! 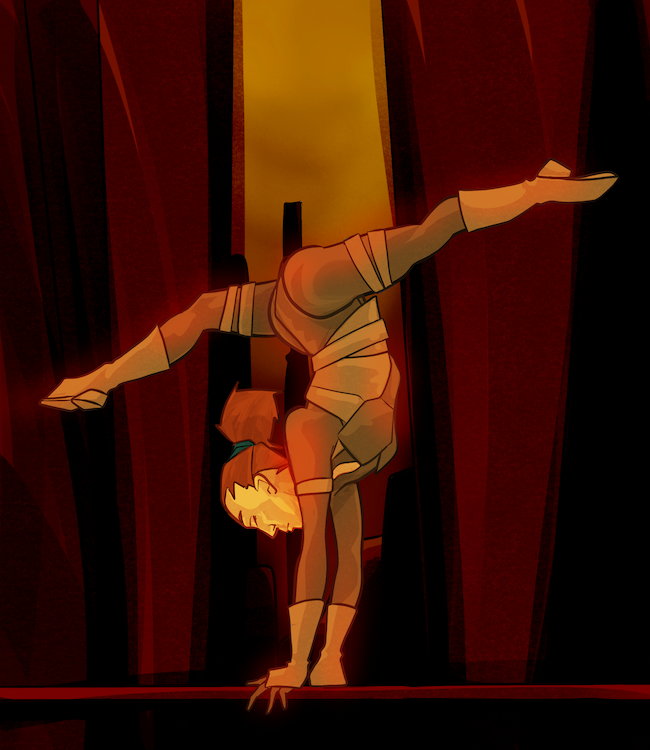 Wasn't too happy with this one, but I didn't want to fall behind, so I just mucked about with colour filters and called it a day.

Mario_Alba
Posted: September 4, 11:18 AM
Always late to the party

Hey! You're not supposed to announce it before I manage to post something for the previous prompt!

As for that, I'll try to do better!

Here's my picture for "drill." I forced myself to find some time... but only about thirty minutes: 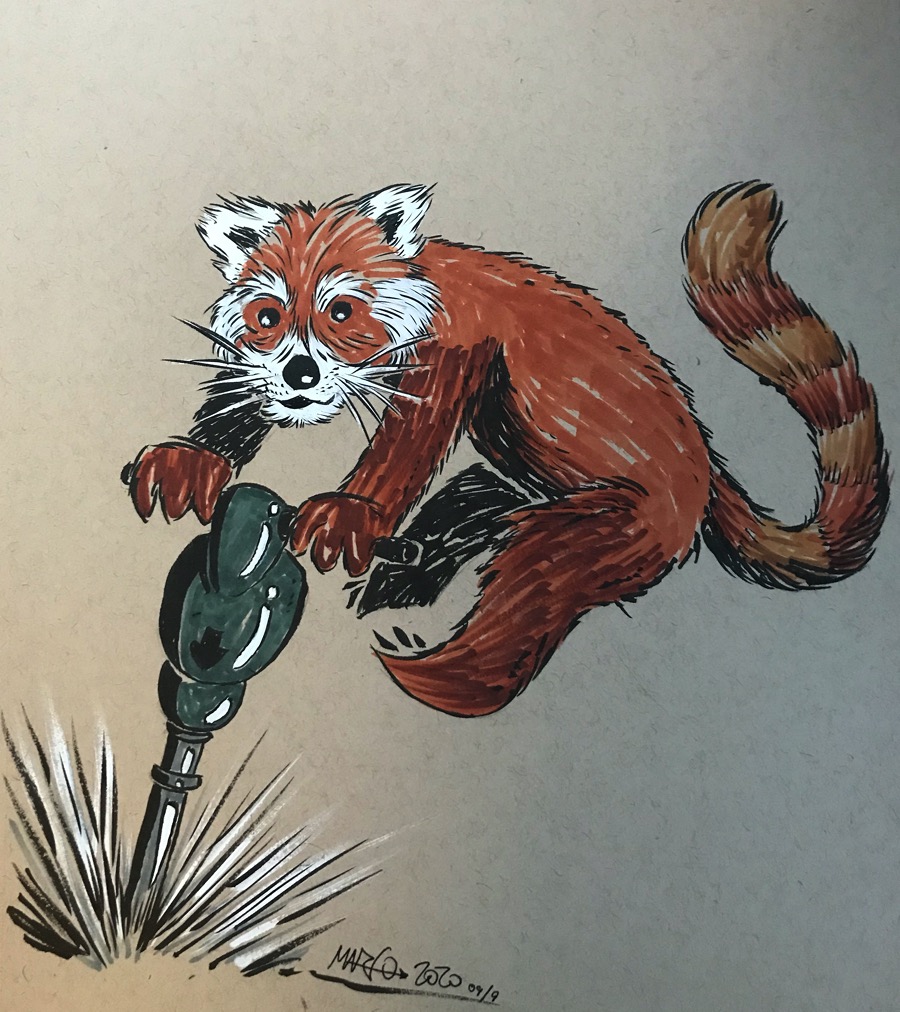 Keeping it simple—when in doubt, just draw the thing: 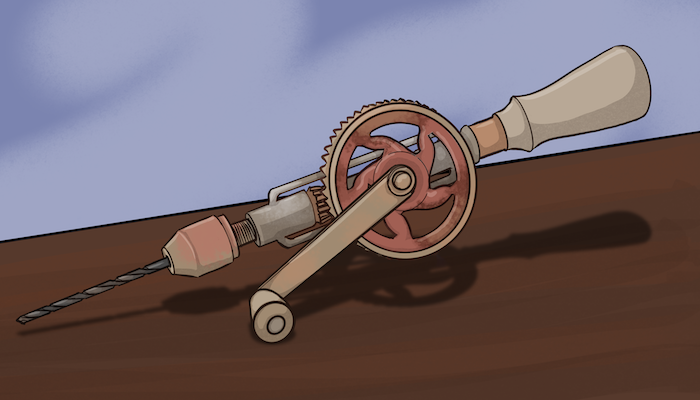 that is aesthetically pleasing to look at

Antichulius
Posted: September 11, 6:04 AM
The Keymaster 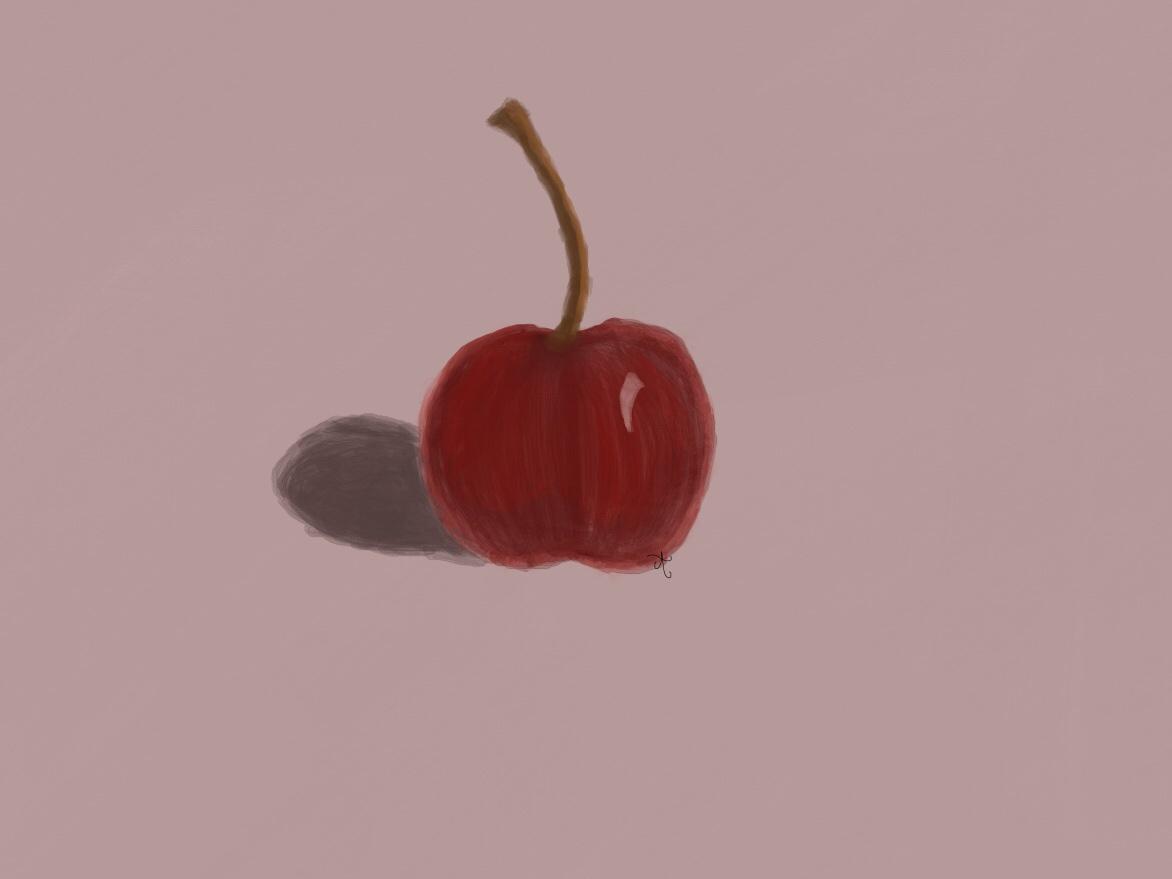 This is the result of my first lesson on Art Academy for the 3DS. I finished the lesson, and then recreated it from memory on my iPad. I’m clueless about art tools, so I used an acrylic paint tool as that seemed to sort of match the Art Academy paints.

I’ve never been much of a visual artist but I’ve always wanted to learn and dabble. Lurking here kinda inspired me to finally try. So I thought I’d share.

Here's this week's drawing, "fragile." I had a more elaborate idea in mind with lots of detail in the background, but I've been super pressed for time this week, and it was either distilling the idea down to its core, or not drawing it at all, so I chose the former: 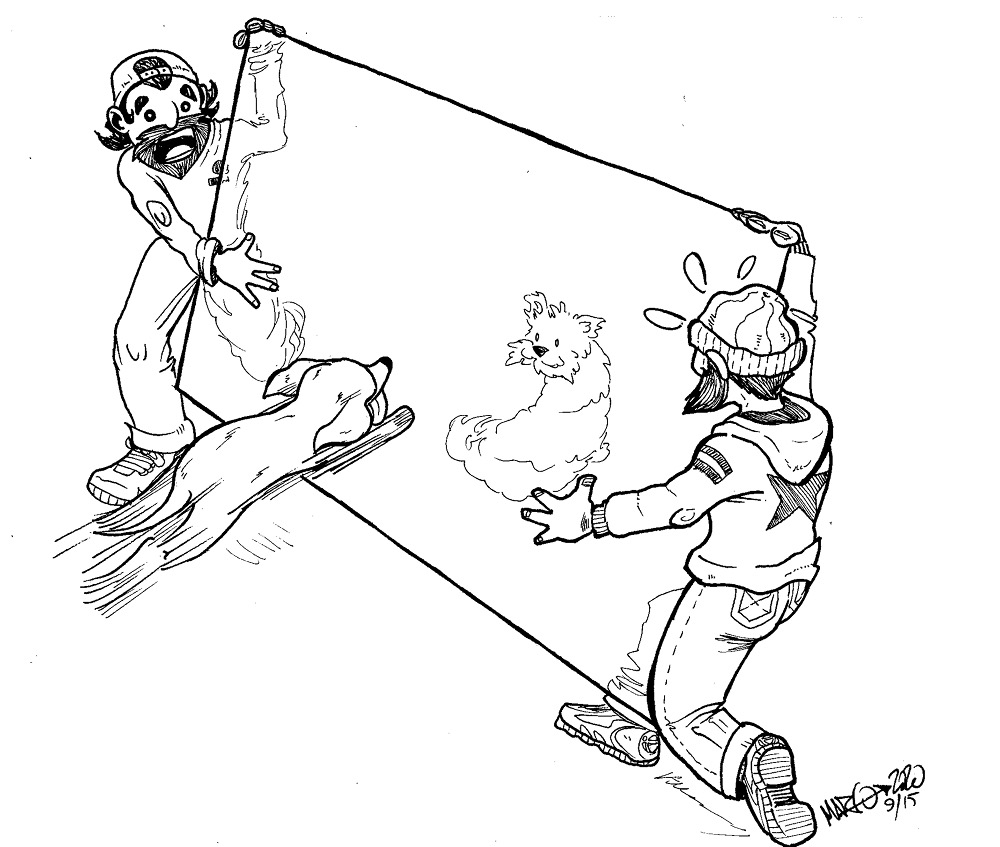 Yikes! I hope that's actually plexiglass, or that those guys lift it real quick! The dog is fragile too.

I love your artwork Mario. It always evokes an emotional response from me.

Mario_Alba
Posted: September 16, 9:58 AM
Always late to the party

Excellent point, SillyRabbit! I'm sure the dog will be fine.

Also, thank you for your kind words. They mean a lot!