Wait, are you telling me that a competent GM matters?

Houston wouldn't have to unload for Tunsil if not for getting into a spat with Duane Brown. And Tunsil isn't even that good a player. He's OK and I get why the Texans need him, but... Sheesh.

Houston wouldn't have to unload for Tunsil if not for getting into a spat with Duane Brown.

Agreed. Who also went to Seattle. This Houston-to-Seattle talent dump pipeline is becoming a real pain in my ass on the Niner side.

And Tunsil isn't even that good a player. He's OK and I get why the Texans need him, but... Sheesh.

He's a capable pass blocker, but he doesn't have the nasty will to dominate in the run game. PFF had him the 17th best pass block grade among tackles last year - good, but not elite, and well below Duane Brown's 5th ranking for that matter. But 37th in run blocking (Duane Brown: 10th).

For the short term in Miami, though, it sure seems like they're trying to recreate Josh Rosen's 2018 Cardinals offensive line.

Yeah, I hope Rosen sits the entire year. It's a tanking season and you gotta feel bad for a guy in that position who was unceremoniously dumped by the team that drafted him. No, come here, guy we don't really want but will give you the shortest tryout possible with no line protecting you, no RBs and no WRs.

The Ravens let Shane Ray go with their cuts. This leaves me scared for their pass rush as Ray at least brought some veteran experience, but you gotta trust they know what they're doing.

Dolphins continue their tear down by trading Kiko Alonso to the Saints. Not a guy I'd want on my team, his mouth seems to be better than his play anymore.

The Niners cut Damontre Moore, the most dominant pass rusher of the AAF, and someone that needs edge rusher depth should snap him up, because he was consistently good in camp and preseason.

The Jags cut former 1st rounder Datone Jones, who also should get scooped up in a hurry, because he had a really good summer.

I really wanted both of those guys to make the teams, but D-line is basically the deepest position on both teams, particularly after the additions of Bosa/Ford and Josh Allen, respectively.

Oakland cut Keelan Doss, intending to sign him to the practice squad if he cleared waivers.

He did clear waivers, and then snubbed the Raiders and signed to Jacksonville's practice squad instead.

Is it cause they have four QBs on their roster? Cause that's not absurd. Chuck is out doing himself.

I would bet money Peterman is going to be gone.

I would bet money Peterman is going to be gone.

Did you have $5 on Nathan Peterman-to-IR? 'Cause that's what happened. Which is terrible, because I want to live in a world where Peterman might start for the Raiders.

* Carolina put PK Graham Gano on IR. Meet your new kicker, Joey Slye, a walk-on at Virginia Tech who hit a 70-yarder in college. He's also built like a LB, and someone has already ask the Riverboat if Slye might play some LB or special teams if the kicking thing doesn't work out.

* Panthers cut WR Torrey Smith (great guy but he was hurt and couldn't beat out the guys ahead of him), LB Bryan Cox Jr. (who just got popped for 90 in a 65 plus weed), QB Taylor Heinicke (which pissed off the white fan base who haven't yet warmed up to Will Grier), and hanger-on RB Cameron Artis-Payne.

* RB Elijah Holyfield (son of Evander) is on the practice squad.

Peterman is the Las Vegas Raiders' starter, when that happens.

Wait, do people actually think the Cowboys are one of the most talented teams in the league? Can they take the division? Sure, are they the most talented? No way but this article says they just might be..

They certainly have more talent than the Giants, that's for sure.

The Cowboys having cap issues because they overpay their stars is nothing new. That article has been written every year for two decades with just the player names swapped out.

Keep in mind they're paying too dollar across their OL, unlike...lots of teams. That right there is quite the cost sink.

They certainly have more talent than the Giants, that's for sure.

The Cowboys having cap issues because they overpay their stars is nothing new. That article has been written every year for two decades with just the player names swapped out.

Keep in mind they're paying too dollar across their OL, unlike...lots of teams. That right there is quite the cost sink.

Lol, yeah they do but the gap is closing.

The Cowboys are on a rough road because they are not drafting enough decent starters, or even valuable role players. They don't have enough of a middle class. They can get away with that while paying their QB a couple million a year, but not when they have a high cost QB on the roster.

I'll take either one.

* I'll give Gruden Metallica's catalogue asa good songs to get your day started, but nothing was better for me when "We Will Rock You" came on when I was driving in for jury duty one day. I came out of the car like, "Yeeeeeeaaaah, let's litigate some sh*t today!"

* The size disparity between Antonio Brown and Trent Brown. Yikes. It looked like Goliath was helping David strap his armor on.

* Are we sure that was Gruden in the Danny Woodhead sequence and not Calliendo?

* Uh, Coach, when you said Keelan Doss wasn't your story, did you say that before or after you praised him the in that well lit interview stage?

* So apparently signaling a roughing the kicker and then calling a running into the kicker is emblematic of what is wrong in America. Can't wait for Gruden's analogy about British politics.

* Every bubble player Hard Knocks focuses on that I like gets cut. It's like the futility of rooting for someone in Game of Thrones.

* How many years left on that contract before HBO hires Gruden to do a TV-MA commentary like he hinted at in 2008?

* Knock on wood if you agree with me.

The Texans just traded for Carlos Hyde, who was absolutely getting cut.

Nah, the chiefs knew that even if he wasn't going to play for them, he had trade value.

I dunno whether to drop Rosen in dynasty... I think he's good, but even Deshone Kizer was given more opportunity to succeed than two tanking teams in a row. 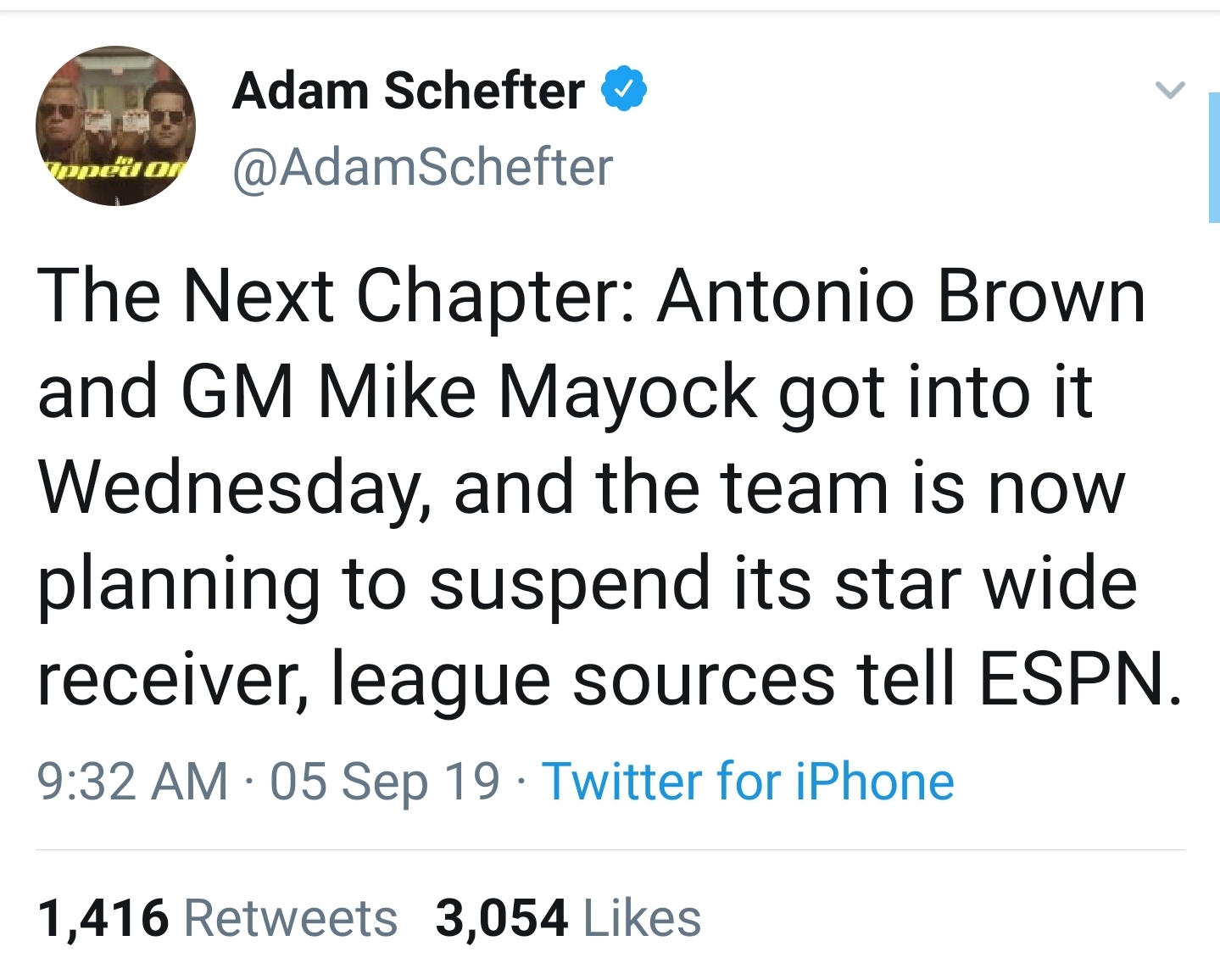 I was going to comment how Hard Knocks suffered from Mayock's absense from the camera. We didn't even see players in their "you're getting cut" meetings.

Now I think there's a whole bunch more we missed from Mayock hiding from the cameras.

Hard Knocks was such oversanitized crap this year.

He'll be gone before Sunday. 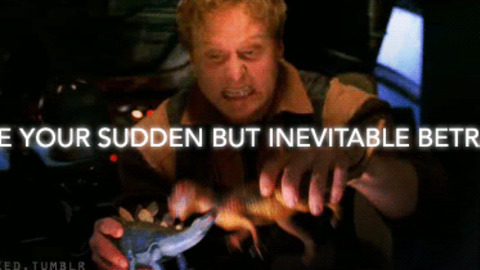 Here's a hint for who has him in Dynasty....

Here's a hint for who has him in Dynasty....

Dynasty is the worst. Anyone that picked him in a redraft this year should have known what they were getting into. But you drafted AB in friggin 2012.

That's more patience than Pittsburgh showed with him.