For the past several months, at random during games, my PC will freeze up hard with an awful buzzing sound through the speakers for several seconds, followed by a reboot. The sound is identical to what's happening in this video (but there is no real solution there - more on that in a bit).

There is no pattern to when this crash occurs. It is not at all reproduceable to narrow down the cause. On some days I can play games for 5-6 hours in a stretch with no issues, other times it will happen after only 20 minutes.

I monitor all of my system temperatures and stats on a secondary monitor while gaming and there is no issue whatsoever of overheating.

Googling finds no shortage of other people who've experienced this problem or one very much like it with the same symptom of the freeze and buzzing sound... but a wide range of dubious "fixes" ranging from "replace your PSU" to "lol clean the dust out of your PC case it's just overheating" - fixes I've either already ruled out or which would require me to start replacing parts of my system based purely on guesses and hopes.

Obviously I would prefer to get some insight into the real cause before I start investing time and money into new components. My current specs are:

Below is an export of the crash dump from the last time this occurred, pulled from BlueScreenView. My understanding is "ntoskrnl.exe" can be any number of things, and I'm hoping somebody can glean some info from the Parameters which will narrow down the cause.

Big thanks in advance for anyone who can help!

I'm not an interpreter but these kinds of random crashes always make me think USB device conflict.

I had a system doing this for years. I replaced the PSU, RAM, GPU, HDDs, and fans... not exactly in an attempt to troubleshoot, but sporadic upgrades over the years. Like you, I couldn't find sh*t wrong, I never got anything on crash dumps, and none of my monitoring ever showed any kind of smoking gun issue. Same symptom too, random blue screens or reboots, and I couldn't narrow it down to a program or process.

The best I could narrow it down to is blown capacitors on the motherboard. I noticed they were blown long before I replaced it, but at this point they've split the tops and started leaking.

Edit: Just watched the video, I couldn't really pull that up and listen to it at work... and yup, that's exactly what happened to me for years. While I don't use that board anymore (EVGA 680i SLI LGA775), I still have it in my stack of parts. Here's a picture of the capacitors. Two are very clearly blown and leaking, but the third towards the top that I circled is just bulging up a bit. It's a little more obvious in person, but that's the kind of thing you'll want to check on your board. Any liquid capacitor that's bulging is bad. 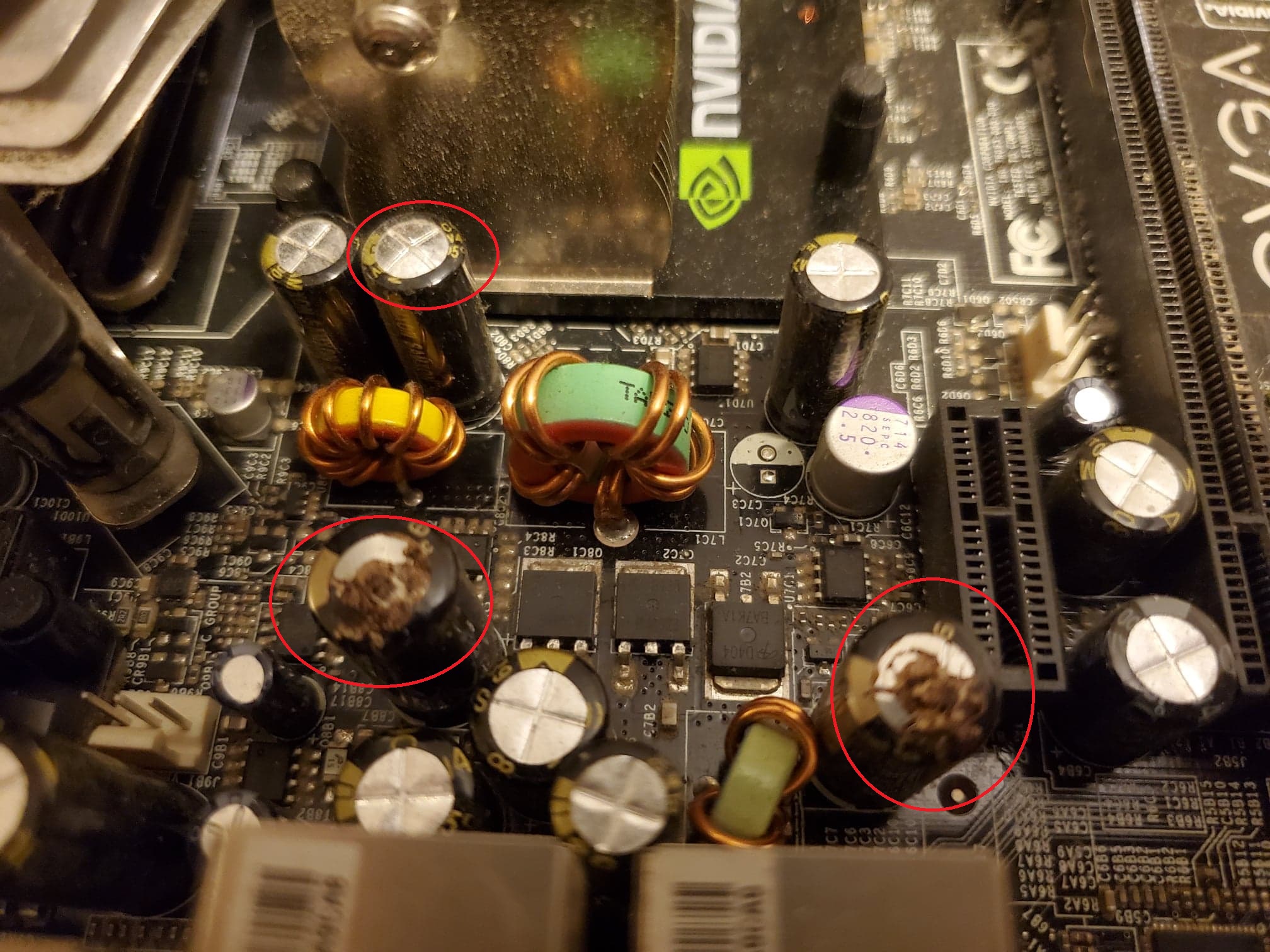 So, I have never posted on the forums but as a years long lurker, dad of two, and full time low-level computer security engineer I feel I have some cred for being here.

To shed a little light on your question. NtosKernel is the Windows main kernel driver. It's been around for decades at this point ever since the shift to the NT kernel from the Win 9X days. It really doesn't have bugs. There have been almost no vulnerabilities in this portion of the kernel since I have been paying attention (5-6 years now). Most kernel vulnerabilities (read: bugs) (which lead to what is known as privilege escalation) are in the graphics drivers which were in Microsoft's hindsight, probably not a good idea to put in the kernel.

All of that to say that this is almost certainly a hardware problem, additionally the parameters don't really mean much, as they are the immediate parameters to whatever function failed, which could take all, none, or some of what is shown (they are just stack/registers). What might shed some light is actually taking a look at the dump, downloading some public symbols for microsoft code and taking a look at the stack trace. That might tell you which driver made the call into NtoS kernel which eventually failed due to bad hardware inputs. If it's the sound driver or something associated with nvidia, you might have a better ideawhich hardware component is failing. Failing PSU's though are pretty hard to diagnose vice other components though unfortunately. When you get down to the hardware level, computers switch from being purely deterministic digital devices which while complicated can always be understood with enough time, to annoyingly real world analog devices that can fail in the silliest ways and may be permanently a little mysterious.

As a final note, blue-screens are not really bugs, they are ways to prevent the kernel from executing something which might be unsafe to do as it recognized that it has received bad input from.

Sorry for too much information.

That's one of the best posts from a Coffee Grinder I've read. Welcome, Mudge.

Thanks, rare that something I actually know something about comes up.