I think I read somewhere that more away teams have won game 7 than home teams by a small margin.

Oh, I missed out on the end of the game. Let me go check Deadspin...oh wait.

Is that the first time ever?

Is that the first time ever?

7 road wins? Yes. As I mentioned above 6 road wins was a first ever too, across the NBA and NHL as well.

I'm speechless. I have been rooting for this team since it was first announced that they would exist, back in the fall of 2004. In December 2004, when some disagreement with the DC City Council over stadium funding led to a bunch of stories about how maybe baseball wouldn't return to DC at all, I spent $50 for a basic adjustable Nats hat on eBay, because there still wasn't a team website that was selling their merch and it seemed like maybe there never would be. I attended probably 20-30 games in that magical 2005 season where, at least before the All Star break, they somehow played like contenders, and even after faltering hung around long enough to make September interesting. I stuck with the team through the crummy years that followed, had a 20-game season ticket plan for 3 or 4 years of the dreaded "Natinals" era. Went to every home opener until I moved away from the area in 2014, including probably the best sports moment I've witnessed in person, Ryan Zimmerman's walk-off home run to christen Nats Park in 2008. I think the lowest moment was probably the 2009 home opener, knowing the team wasn't likely to be good but at least hoping for a decent showing on the first day, instead watching a drubbing at the hands of the Phillies while the park was packed with Phillies fans (in part because of a horrendous plan by the Nats ticket operations to sell big packs of tickets to Philly fans--really, for the home opener?!?!), raucously cheering their team and booing the home team. Jesus, that sucked. And then with Strasburg and Harper and plenty of others, they got good, but there was still plenty of pain. Blowing leads of 6-0 and 7-5 in Game 5 of the 2012 NLDS. Losing the 2014 NLDS because the manager decided not to use any of their good pitchers in a high leverage relief situation. Taking tough beats in both the 2016 and 2017 NLDS Game 5s, games we totally could've won but just didn't. Starting off looking *terrible* for the first month or two of this season! And then, in this postseason, facing elimination 5 times and coming from behind in every single one of them! I just don't know what to say. I felt so used to the rug getting pulled out from under me, I just didn't know what to think. Even leading into the bottom of the ninth last night, I was convinced this was all going to end badly. It was shocking to me how quietly the Astros went down in the bottom of the ninth. I think it was after Hudson got the first batter out in the ninth that I realized oh wait, this is actually probably going to happen. When they finally ended it, I cried so much! Ryan Zimmerman, whose career I've followed for nearly 15 years (and overlapped with me at UVA, not that I had any idea who he was at the time), who was our lone bright spot for so many tough, tedious years, now gets a World Series ring! Strasburg will never have to answer another stupid question about the 2012 shutdown! The moment where Anibal Sanchez and Max Scherzer found each other on the field and Sanchez grabs him and says "We won one! We finally won one!" and they are crying and laughing and hugging each other. Man. Unbelievable. So happy. I will remember this October for the rest of my life.

Congrats mrlogical. Was a great run that I was happy to hop onto that bandwagon.

At least I've been to some Nats games while visiting friends in DC a few years ago. It's nice. 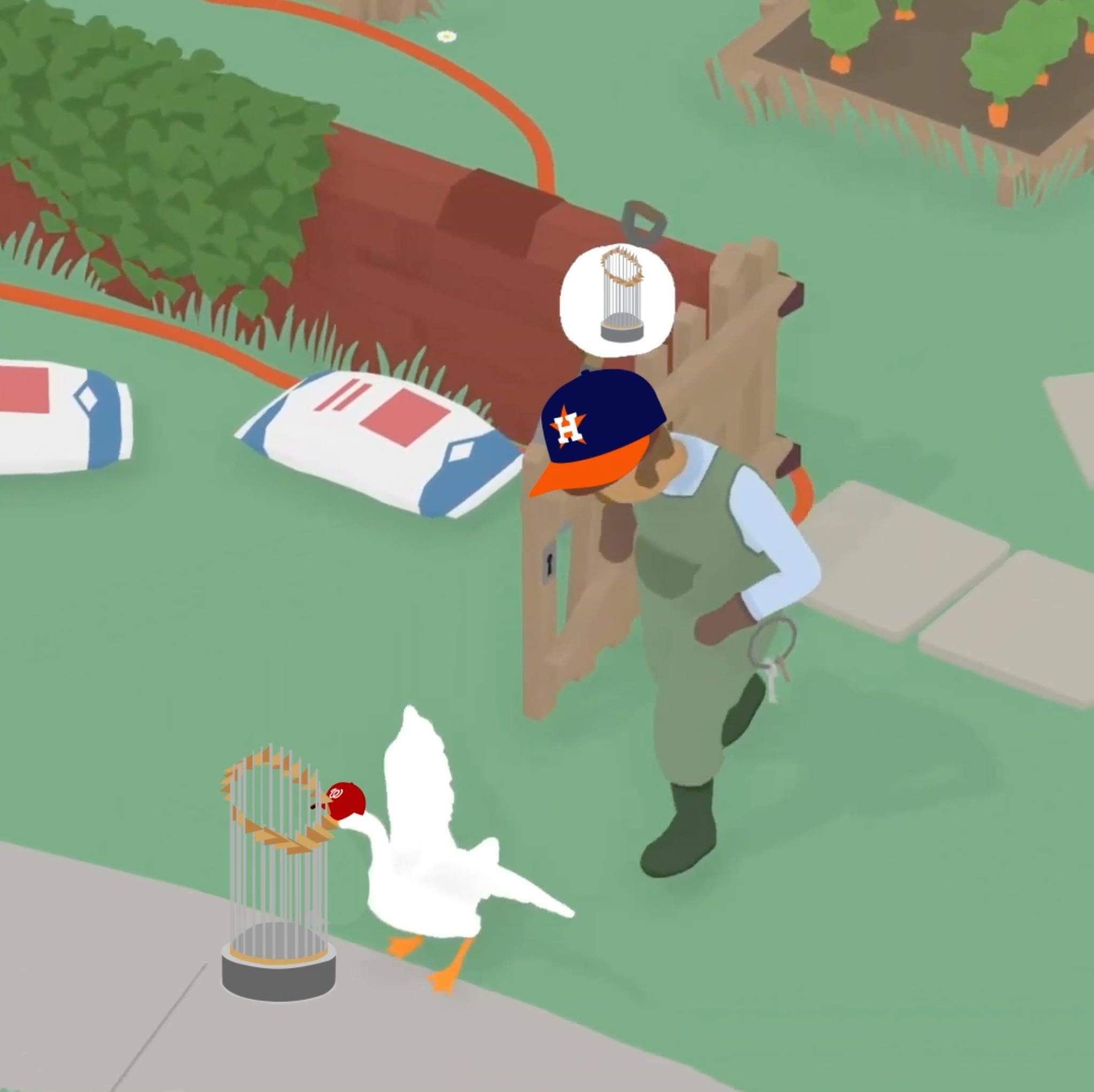 GG Houston. I thought for sure you guys were gonna stomp us.

Fairly persuasive (to me) short video about the Astros using live video to steal signs during games.

No clue what the past two seasons of Phillies baseball screamed to the Giants. Hire this guy!!!

They used to work together with the Dodgers and sports offices are pretty much entirely based on hiring your friends and former coworkers.

Even when your coworkers mishandle sexual assault allegations and/or advocate the suntanning of testicles to increase performance?

Even when your coworkers mishandle sexual assault allegations and/or advocate the suntanning of testicles to increase performance?

ESPECIALLY when your coworkers mishandle sexual assault allegations and/or advocate the suntanning of testicles to increase performance.

I liked that one season where the Yankees and Red Sox collapsed around themselves temporarily leaving the Jays and Orioles as the best in the division. It was a strange and wonderful time.

At least it’s been an exciting offseason.

Another fine reason no salary cap in baseball is a good thing! (TM) /s/s/s/s/s/s/s/s

All you need is a garbage can and a stick to hit it with.

LOL, these contracts are hilarious. Every other player in the other leagues is unbelievably jealous. Because that money is locked in.

At least your manager doesn't suntan his balls. /grumble

Bumgarner signs with... Arizona. Let's all point and laugh at the Dodgers now.

Ryu is still out there, right?

I'd actually like to see the Dodgers win the World Series so Kershaw can get a ring.

Ryu and Keuchel for pitchers. Donaldson, Ozuna, and Castellanos for position players. There’s also Encarnacion and Puig. Pretty slim pickings after that. Much faster free agency this offseason.

bhchrist
Posted: December 18, 3:20 AM
Chances are I have something to say about this...

Bumgarner signs with... Arizona. Let's all point and laugh at the Dodgers now.

I'll stick to pointing and laughing at the D-Backs. Total treadmill team. Let's see if Bum's game travels, as his numbers outside of one of the best pitcher's parks in baseball have not be good the last couple of years.

Astros manager and GM suspended for a year, team fined $5 million and lose first and second round draft picks in 2020 and 2021. This is probably the biggest smackdown on a team since Bountygate in the NFL.

Edit: I have now lived long enough to see the phrase "banging a massage gun" enter into the vernacular.

Double edit: And now they're fired.

Debating whether to wear my Wolrd Series Champions hat to PAX this weekend. It is my best hat.

If it's only a one year suspension, I'll bet those guys get snapped up by another team in a year.

I think they'll be quietly blackballed or brought in far behind the scenes.