They say that all good things must come to an end. I suppose that’s true for this column as well. When I started TLDP (almost five years ago!), Wordsmythe wondered how far it would go before I broke. Well, I’ve broken. Or rather, I’ve come to the point where I can either break or stop, and I’ve elected to stop.

It’s been great fun, taking games you’ve given me (and games I’ve given me) and turning them into whatever this was, but after a lot of soul searching and general naval gazing (I sunk my battleship!), I’ve decided that I can’t keep up the pace I’ve been running anymore. I can’t say the stress is literally killing me because I haven’t been to a doctor about it, but it’s not something I can maintain.

But don’t think you’ve seen the last of me! No sirree; I’ll still be around, contributing the odd cautionary tale and developer interview. But this is the end of TLDP. At least for now.

Sponsored By: My family history

My grandfather spent World War II fixing B-17s in the European theater. That, and never quite achieving the rank above sergeant. You see, he had a terminal case of what we in the family call “Decker Mouth.” Those afflicted tend to say things that other people keep bottled up, like, for example, calling a bird colonel a “G-d D-mn liar.”

Anyway, in Plane Mechanic Simulator there aren’t any people or B-17s to repair, so I don’t quite get to see how grandpa saw the war. But there are, fortunately, clipboards and Spitfires, so all is forgiven.

If you’ve played Car Mechanic Simulator, you’re already plenty familiar with what to expect from Plane Mechanic Simulator. Pilots write you reports with complaints of varying detail, and it’s your job to figure out what’s wrong and fix it. It’s more or less the same game with a different kind of engine. I mean the engine you’re pretending to repair, not the engine that the game runs on. That’s just Unity. 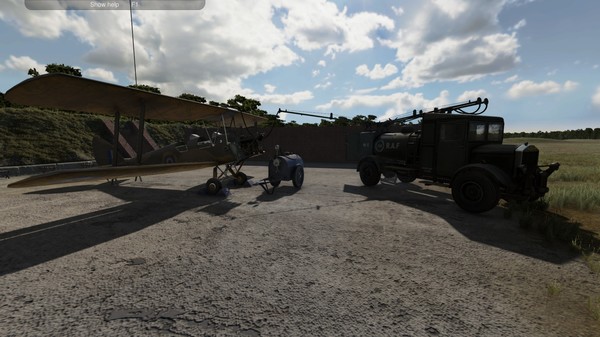 For those unfamiliar with Car Mechanic Simulator, let me give you a crash course. There are parts of an engine you need to remove, and doing so means removing the screws of the parts in question—and also those of all the parts that are blocking your way. You must click on, and watch an unscrewing animation for, each screw. Therefore, the pithiest way to describe a Mechanic Simulator game is to call it a game for people who like to screw around with engines. 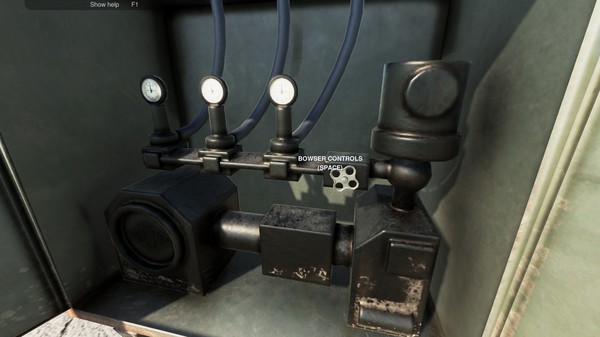 In typical simulator fashion, you are first tasked with simple fixes like “change the oil” or “replace the propeller.” The de Havilland Tiger Moth serves as an extended introduction to both the controls of the game and the workings of a military aircraft. Eventually, you start taking out major bits of the engine so you can get at the deeper, broken bits. I’m not sure how far into the tutorial I am, but I’m now replacing piston rings, so I imagine that’s pretty far in. Regardless, there are over eighty different repair jobs in the loosely-termed story mode, so you won’t lack for things to do.

One nice addition to the genre is the way Plane Mechanic Simulator handles repairing damaged parts. Certain parts can be brought to a workbench and examined. If you click on the highlighted points of interest, you’re treated to a simple minigame where you add just the right amount of oil by holding down the left mouse button. If you find all of the points, and fill the oil gauges just-so, you can restore the part from “damaged” to “pristine.” If you find all the points of interest but overfill or underfill a few of the oil targets, you can still use the part, just not in as good of a condition. I’d like to say it matters, but it doesn’t appear to. I failed to perfectly repair a few parts and still got “perfect” ratings at the end of the job. Still, it makes for a nice personal goal, and with no pressure, it is a bit more fun than it might otherwise be. 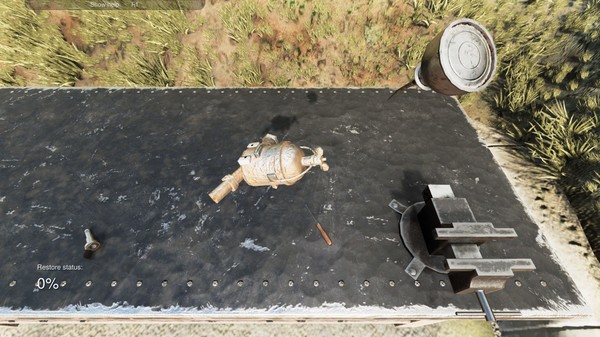 If you’re a fan of mundane simulators, you’re probably wondering about the jank level; there’s always a certain amount of jank in games like this. Perhaps it’s because they come from small teams or because they’re using first-person-shooter engines to simulate the act of using a screwdriver. I’m happy to report that the jank level here is fairly low. The fiddliest bit is figuring out where the game will let you place the ladder to refuel the plane, but you’ll get plenty of practice since it’s part of every mission. Once, I put a part back together wrong and couldn’t go back to undo it; I’m not sure if that was deliberate. I’d like to believe the developer was just trying to simulate the fact that sometimes parts seize if not appropriately reassembled, but since the game crashed when I tried to restart the mission, I’m going to have to conclude it was just a bug.

That’s not too bad, considering. Grandpa would have been proud. Or possibly not. Either way, I’m sure he’d have told me in the least uncertain terms possible.

Will I keep fixing?

I always say I’m going to come back to these games, and I almost never do. Mechanic simulators don’t tend to capture my interest as much as Farming Simulator or Gold Rush, both of which set my brain on fire for a solid month.

I should probably have had that checked, but whatever. The point is that I would like to play more, but given my current schedule, I probably won’t. Don’t take that as a rejection of the game, though. Plane Mechanic Simulator would be a fine addition to your collection of mechanic simulator games, and if you have any interest in historical aviation tech, you’re unlikely to find a better game out there.

Is it our Darkest Soul?

Plane Mechanic Simulator has a very gentle learning curve, so I don’t think it can rightly be called the Dark Souls of its genre.

On the other hand, I’ve heard rumor that there are timed missions in the late game, which makes sense given that you’re literally fixing planes for combat in a major war. Depending on how short the time limits are, that could put it into Dark Souls territory. Timed missions are, to use a venerable axiom, a blight on the industry.

Fortunately for me, I’m not expecting to play that far into the game, so yay! No blight for me!

But of course you are. How else could this end, but as it began, with maximized mundanity?!?

TLDP got Too Long, so you Didn't Play it anymore?

Gonna miss seeing you on the front page every week! Five years is a hell of a run to do anything weekly, really proud of how far you took this concept and all the fun twists and turns along the way. Glad you're sticking around too

Thank you so much for contributing this column, I'll miss it! Good luck and happy hunting

I'm going to miss this column. Thanks for all the years of entertainment!

Thanks for all the words with thoughts and stuff!

Amazing job Greg. I often marvelled at the commitment you demonstrated to produce these high quality weekly first impressions, so bravo and thank you for the wonderful reading over these years.

This was arguably one of my favorite columns on the site. It will certainly be missed. Enjoy your retirement!

Nice work, Greg! Despite your catastrophically incorrect TLDP on Subnautica, I've really enjoyed reading about all the games I'll never get around to playing. Looking forward to seeing what you do next (you know the creative urge will strike again, muahahahahaha!)

I can't believe it's been 5 years! I've read them all and even been tempted by a few of the games featured - Gold Rush, I'm looking at you!

Thank you, Greg. It's been a pleasure!!

So long, and thanks for all the wishlist entries.

Damn, five years... Nice work Greg, and thanks for all your hard work and sacrifice!