Sponsored By: Gunpowder Team (review key from the developer)

Imagine if Broforce had been on the original Game Boy, but designed by people who thought Super Meat Boy was too casual.

That’s Gunpowder in the Teeth.

Of all the games I played on my NES, I only ever beat two of them: Hudson Hawk and Contra. I used to speed run through them before it was a thing. I want to say my best time on Contra was 21 minutes, which probably isn’t all that impressive anymore, but I was pretty pleased with myself at the time.

I’m not saying this to brag, but rather to give you a taste of my history as a fan of side-scrolling, run-and-gun platformers. Contra, Rolling Thunder, Cuphead, Broforce—if it has 2D platforming with guns, I’ve probably played it.

So, it is with a somewhat heavy heart that I tell you that I just don’t like Gunpowder in the Teeth very much.

Much of what I like in the genre is present: the controls are tight and responsive, there’s just enough humor to levin the punishing difficulty, and there are multiple character classes with different weapons to unlock. It’s a little bit Broforce, but with enough twists and tweaks to keep it from being derivative. What’s not to like?

As much as I hate to say it, it’s the visuals I don’t like. Just saying that makes me feel a little grimy, since I’ve long been someone who can appreciate even the fugliest games. I’m not some shallow casual whose head turns at the slightest flash of fancy graphics. I’m not the guy who pans a game just because it looks like something that fell off Newgrounds ten years ago. I’m all about the gameplay, baby! Beauty is fleeting, but good joystick-action is forever!

At first glance, Gunpowder in the Teeth has an interesting, monochromatic style that evokes the classic Game Boy, but this stylistic choice is also a double-edged trip-wire. Or rather, an easily overlooked, often hidden, razor-lined, insta-death, barbed wire. 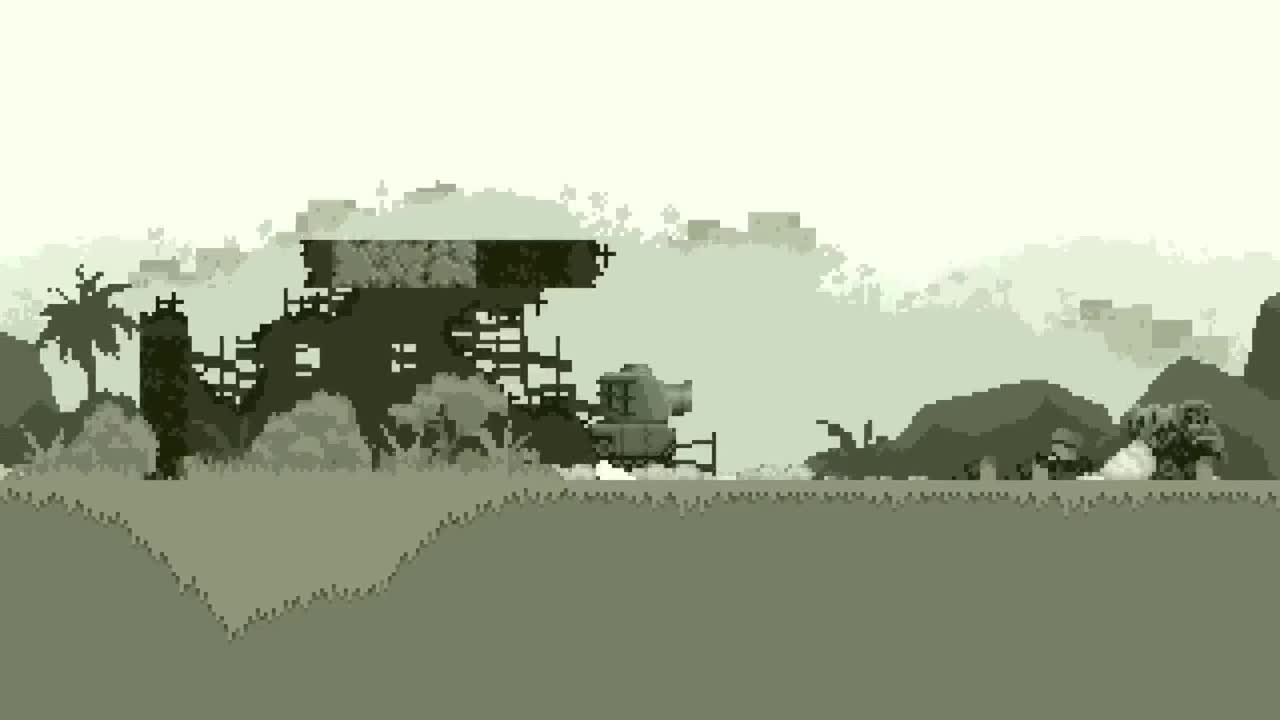 You see, levels are filled with more than just enemies trying to kill you; there’s also environmental hazards like barbed wire, collapsing floors over barbed wire, and platform edges covered in barbed wire. Basically, it’s a lot of barbed wire, which is sadistically harmless when you first touch it, simply ensnaring you until you try to disentangle yourself—and then you die instantly. Also, did I mention there’s barbed wire covering the ground below blind jumps? That’s just mean.

It’s easy to see the echoes of Super Meat Boy in this type of difficulty, which under normal circumstances would be fine, were it not for the 50-shades-of-green art design that nearly camouflages all the barbed wire into something resembling background foliage. 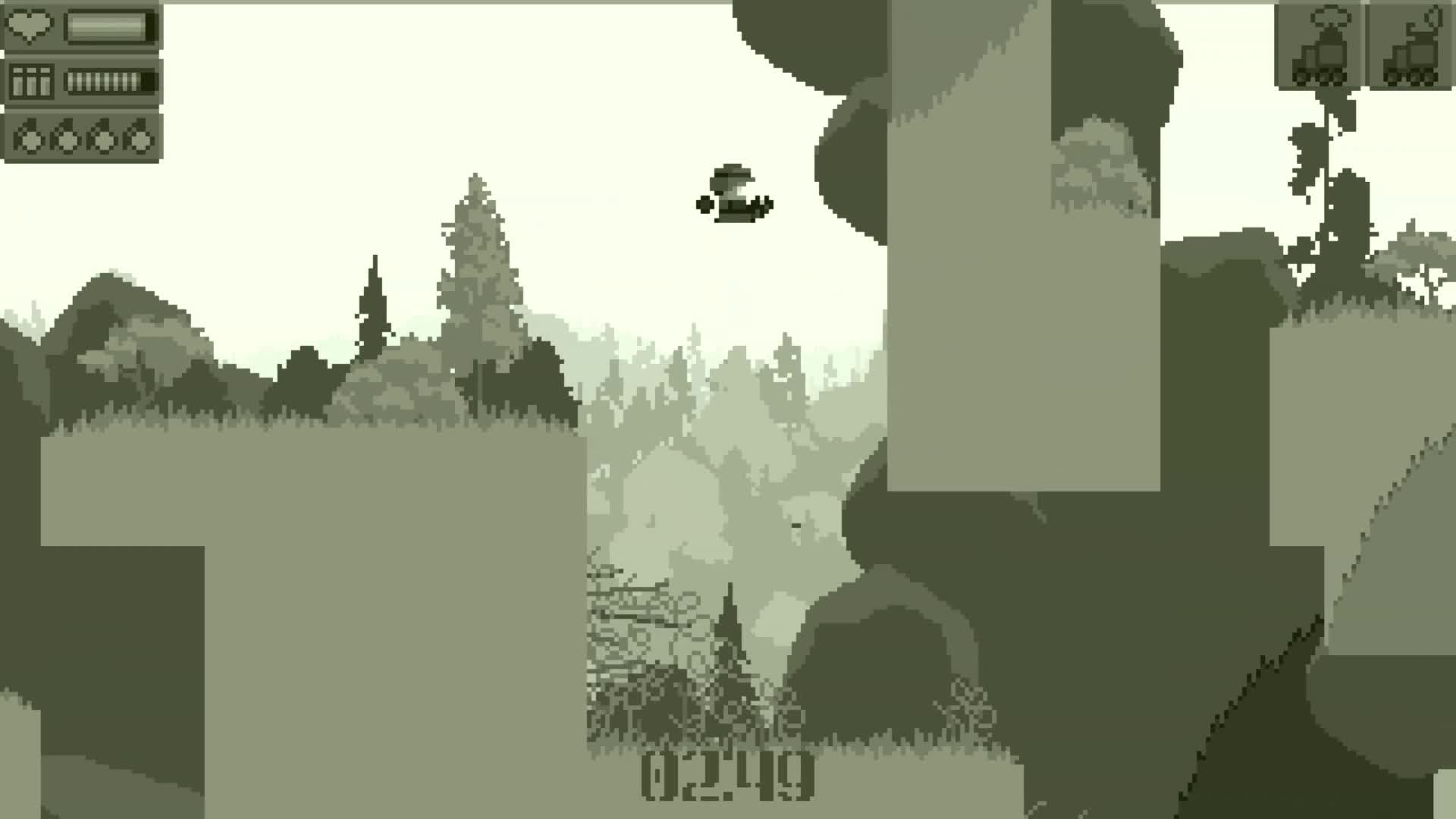 If death-by-barbed-wire weren’t so hard to spot and avoid, I wouldn’t mind that the slightest nick sends you back to the beginning of a (surprisingly long) level. In fact, it’s mainly the punishingly-hidden aspect of the brambled wire that prevents this from being a game of the year contender for me. It soured me that much on the whole package.

It’s a real shame, because on paper this game should be on my short list of awesome, holding ranks with Contra, BulletStorm and Duke Nukem. In practice, I’m sorry to say, it’s just another game that sacrificed fun for art.

Will I keep flossing?

Sadly, no. If they release a patch to colorize the game, I’ll give it another shot to see if it helps. But in the end, I’m just not going to throw myself at something, trying to like it just because I think I should like it.

Is it the Dark Souls of dance moves?

Yes, I do believe it is. Dark Souls leaned heavily on darkness to make things hard to see, adding to the difficulty. You had to expect that, though, it was right in the name! Of course, you could adjust the gamma to give your eyes a break (“slide right until the icon is barely visible,” my foot! I’m cranking that slider until I can read by the glow of the icon!). Arguably, the sheer existence of such an option makes Dark Souls slip a bit down on the Dark Souls scale by comparison.

But seriously, folks, Gunpowder in the Teeth is a frightfully difficult game with an aesthetic that plunges the punishment over the brink. Everything about the game is unforgiving. Now, if you were sufficiently determined, you could probably overcome it all, but that doesn’t change the fact that Gunpowder in the Teeth is the most Dark Souls game I’ve played since Dark Souls.

Funny coincidence, I'm currently playing Save me Mr Tako, which also has a GB aesthetic. I'm pleased to say that it doesn't suffer from the same problem of hazards being hard to spot. It also lets you change the colour scheme, so I'm playing in calming shades of blue.

I think I'd get frustrated with the cheap deaths quite quickly.

Huh, sounds good on paper, but damned if the hard to see obstacles are one of those things that's in the bad design category.

Also, I'm curious where the devs are from as they clearly put their Steam page through Google translate:

Mega hardcore! In this game you will receive a loss at first but only then you will notice the enemy. The realization of fighting in classical mechanics of a platformer.

I had forgotten about Save Me Mr Tako! I’ll have to give that one a look. Thanks!

The funny thing about Gunpowder in the Teeth is how I felt compelled to keep playing it well after I realized that I wasn’t actually enjoying it. I knew after 10 minutes that the visuals were killing the game for me, but I kept wanting to push through.

There’s some addictive quality that is not fun, but is reminds you of fun so your brain is fooled into thinking it’s fun. Kind of like Splenda or Angry Birds.