The Employee is a tentacled being from the nightmare dimension. We are an EEOC compliant corporation, and it was the most qualified for the job, as evidenced by the fact that its father is the CEO of the company.

List your achievements as they relate to the goals you and your manager committed to at the beginning of the year.

I completed many tasks this year. Most of them seemed like pointless busy work to the untrained eye, but were clearly of vital importance to Godly Corp. For example, on my first day I kept three whole continents warm with a heat lamp all while fighting off beetles that had clearly gotten into the “special” sweeteners in the coffee area, because they were absolutely massive. People should be more careful with that sort of thing. 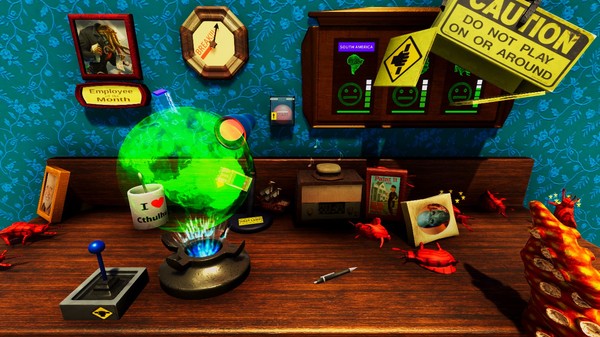 I also used a company-approved laser pistol to destroy diseased spores on one of the company’s moons. I believe my maximum infection level was below ten percent, and it would have been lower if the laser pistol hadn’t kept dying while I was using it. The charger is cumbersome to use and not even attached to the laser pistol, which meant I had to keep dropping the pistol to shake the charger. This is not a well designed system, and I would like to request that in the coming year more accommodations are made for employees with one tentacle.

I also learned to pilot a drone and used it to deliver crystals to a box. This seemed like an unnecessarily complicated task (do the crystals have to be on moving platforms?), but I was able to pack four crystals into the box, when I was only asked to pack three!

At one point during the year I was asked to water a planet full of succulents with a spray bottle. While I was doing that, the office was attacked by evil robots. During the attack, not only did I manage to destroy dozens of robots with a Godly Corp pistol, but I also managed to finish watering all of the succulents. 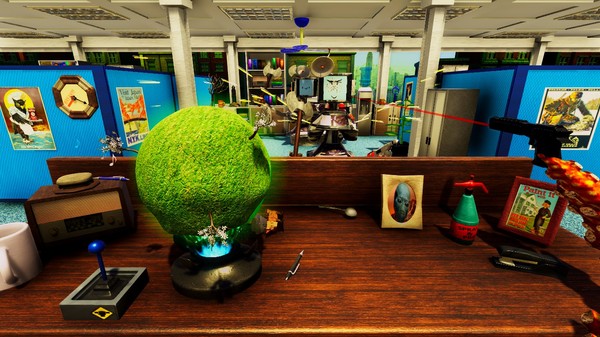 Also, I went on a business trip to space, where I used superglue and a hammer to rebuild one of the destroyed planets we had in stock – in a zero-gravity environment!

List at least one area of improvement to focus on for the coming year.

My time at Godly Corp. has taught me the value of multitasking. Most of my assignments involved doing two jobs at cross purposes, such as watering plants while defending against killer robots. While I have improved my abilities in this regard greatly, I believe I should focus my efforts on sharpening them further. Especially since I understand that my next assignment is to use a laser pistol to heat up specific sides of a box while using a maraca to scare off some sort of monster in a way that seems mechanically very similar to the job where I killed infected spores. 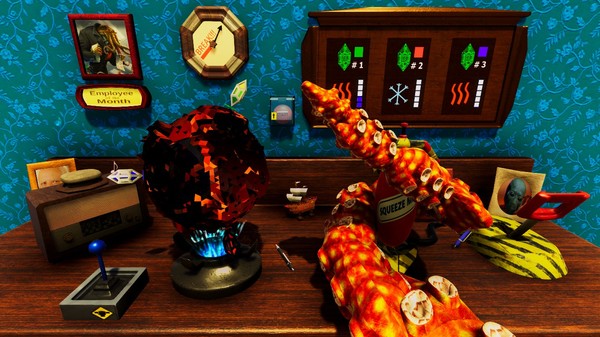 Manager’s Assessment: Will you keep this employee on as part of your team?

As for the killer robots, I disagree with the associate’s assessment that they went over and above in killing the robots. If they remembered the employee manual, they would have known that fending off killer robots is an expected duty of all employees.

That aside, the tasks completed were completed effectively and I believe that there is great potential for improvement in the associate, and I’m not just saying that because the associate is a direct descendant of the CEO.

Feedback for HR: Was this the Dark Souls of Employee Assessments?

Everything at Godly Corp seems deliberately designed to be difficult for an employee with one tentacle to operate. This was a challenge for me initially, but as I got the hang of things I was able to complete increasingly complex tasks without too much difficulty. I do, however, think the company would benefit from more robust training materials.

That laser pistol, though, should be replaced. The battery only holds a charge for, like, ten seconds, and the charging mechanism is terrible.

So, Surgeon Simulator meets Job Simulator with Octodad's controls? Weird. I love this exists and all, but am curious if the whole "bad controls" genre can support itself.

I enjoyed this. Thanks, DT!

So, Surgeon Simulator meets Job Simulator with Octodad's controls? Weird. I love this exists and all, but am curious if the whole "bad controls" genre can support itself.

Well, Red Dead Redemption 2 seems to have done all right for itself, so I’d say the answer is “yes.”

I'm surprised that this isn't a sequel to Greed Corp, although that game is probably mostly forgotten by now.

I'm surprised that this isn't a sequel to Greed Corp, although that game is probably mostly forgotten by now.

Frankly, I'm hoping the sequel is a game where you play a janitor in the same universe. The office building could be next door to Godly Corp.

They could call it Cleanly Corp.