Bad News: It looks like it will be the last with the five current members. Hani and Jeonghwa have not renewed their contracts and will leave the company at the end of the month.

Yeah I'm sad about EXID too. But most predicted it would happen with Hani previously commenting she'd had enough of the idol life. That said she's got a strong variety show profile so she'll continue to do well. Not sure what made their maknae decide not to re-sign, she's very pretty but not known for being strong in singing or dancing. They had a decent run after Up and Down rescued their careers so we can't be too sad about it. The other issue is that most girl groups slow down and tend to break up after 7 years with fans chasing younger groups.

That leaves the other three who decided to renew. Solji just came back from her medical leave but is definitely talented enough to go solo as an artist so I'm guessing she will focus purely on singing. Hyerin is not too far behind Solji vocally but has more talent for variety shows; I think she'll participate in a range of activities. LE is known for her writing and producing so I'm guessing she will release a few rap tracks but focus work on the production side of things.

Only 4 of the group in the MV but all 7 currently active are featured in the song. 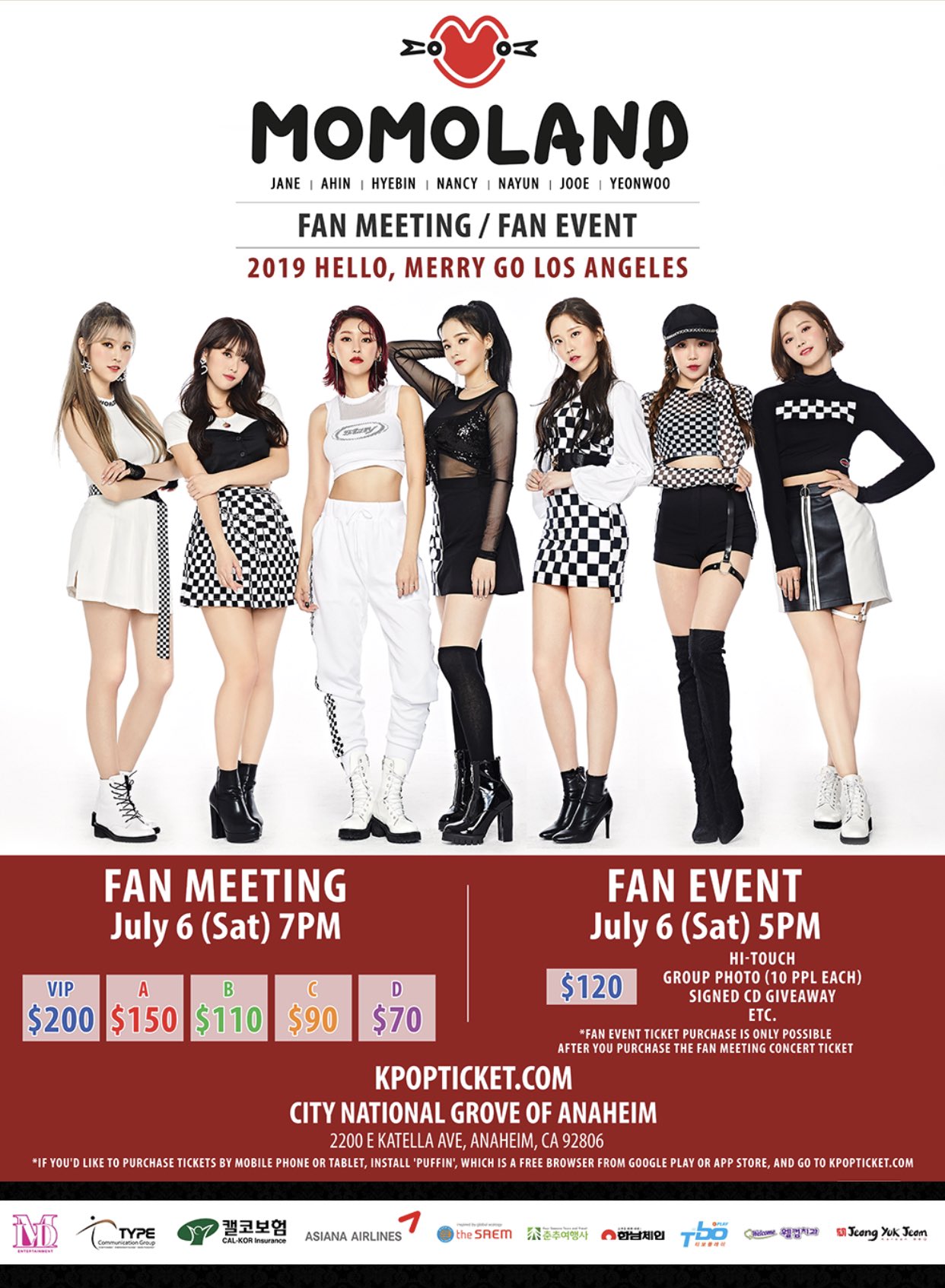 And I’ve not yet booked my hotel. 12 hour each way road trip!

But I am so very very excited!

Oh my god! That's awesome. Have tons of fun. I'm very excited for you. It'd be a dream come true for me to do this for any group I currently follow, and this is your ultimate group. Hope you'll have pictures to share after the event so I can live vicariously through you.

Yeah, I saw it on Twitter and at first my gut just sank because there’s no way I could pull that off. I have un-cancelable work the Friday before and the Monday after—we’re hosting a state-wide conference at work that next week. Plus the cost of it all.

But with a few hours stewing on it, I realized I could basically leave just after midnight Saturday morning and book a hotel that will let me check in like at 1:00p so I have a couple hours to nap and shower. Then make the drive home Sunday. It’s a whirlwind, but if ever there were something I’d whirlwind cross country for, it’s this.

I lost my first and second choice seats for the hours stewing, but I’m still close and centered.

I also ordered a very cool shirt to wear for the event. And I already bought a light stick on a whim from ChoiceMusicLA. So I think I’m pretty set.

It’s all pretty unbelievable though. Momoland is going to be in Toronto on the 8th, and I was so bummed there’d be no way to go, but now they’ve added this one! I only wish they’d have a fan signing rather than just a Hi Touch. But the plus side from examining the ticket map, it seems like they’re keeping the extra event relatively small, like 100ish people it seems.

And yes, I plan plenty of pictures. I’m trying to figure out how to be both the person enjoying it and the person doing a fan-cam and taking pictures to share with my 5yo daughter. When I explained what a concert meant, she lit up: “I want to go!” Then I explained the cost: “Oh, that -is- a lot of money, daddy!”

Oh, the other thing I’m really hoping for is a surprise addition. In the Philippines, they did a cover of a popular local song: “Salmat.” And it Taiwan, they had an amazing cover of “Flashlight” that you can only find bad-sound videos of on YouTube. I’d love a repeat of Flashlight in LA, but a new addition would be so cool!

Crazy that a year ago I was still months away from my Kpop introduction and now I’m driving 24 hours over 2 days for it!

Sorry for all the rambling, but if there’s any place I know that would understand my level of excitement, it’s here.

Crazy that a year ago I was still months away from my Kpop introduction and now I’m driving 24 hours over 2 days for it!

Wow, no kidding! It's awesome that you found a group that you connect with so strongly

I'm excited to see the pictures.

I had to look up "Hi Touch". Every time I think I've figured out all the K-pop lingo, I am quickly proven wrong.

Got myself an AirBnB about 15 minutes from the concert, and I've got a plan to rearrange my responsibilities so I can drive all day Friday and back Sunday without having to do an overnight drive. All the better for a smoother trip!

I love when they break out a metronome.

I like it, but even though I can recognize a lot of the elements that go into a typical EXID track, this one sounds very different to my ears than stuff they've done in the past. I preordered the album, so I'm looking forward to that in arriving in a week or so.

I was thinking of posting this before ReacttotheK posted their reaction video, but they also agreed that this is a pretty good song.

I may have to check out more from them.

Also, some new and nice but overlooked songs:

Big fan of EXID Me&You. I wasn't super hot on the chorus at first, but it has grown on me. I love the R&B feel of the verses and the soaring vocals from Hyelin and Solji. It's sad to hear that Hani and Jeonghwa aren't re-signing with the company. That doesn't necessarily mean they're disbanding, but a new track with all 5 of them would be a surprise.

I've listened to a few songs from Cheeze before. She has some good stuff. That more chill/indie vibe is similar to some other stuff I've been listening to lately. Here are a couple of my recent favorites:

I like Hyolyn's new song. It's much more low-key than her last few singles, but it shows off her vocals nicely.

Their new dance cover is awesome:

Nice. I'm missing Red Velvet and really want a new comeback. Right now they're promoting the Sappy Japanese CD release that's coming out next week, but I don't think that'll quite cut it for me.

These LOONA dance covers are making me more and more hyped for whenever their next comeback comes too. I hope the hard hitting dances are a glimpse into what to expect.

I hope the hard hitting dances are a glimpse into what to expect.

Me too. Too often these girl groups have incredible dancers (Seulgi, Lisa, Momo, Seungyeon, etc.) that aren't able to show off their talents because almost all girl group choreo is focused on being cute or catchy. I don't mind some of that, but variety would be nice. Feed me some of those hard hitting hip-hop moves, LOONA.

This song is going to be huge:

This song deserves to be huge:

At this rate, I’d be better off subbing to Spotify or something, but I like having my own digital copy for any kind of device. I’ve just bought quite a few albums lately.

I’ve got an iPod classic (no WiFi whatsoever) that I use in my car and at work. I’ll admit that some of the videos I post here are because I wanted to be able to find them again the next time I was on iTunes.

My current playlists are about 125 kpop title tracks, and 400+ general kpop (all album tracks).

I just use Spotify fremium (it randomly shuffles on your phone, but works like any other music player on your PC).

I have no idea what SM Entertainment is thinking with the Sappy comeback concept, it looks less than flattering for Red Velvet. Which is beyond comprehension given that is a group where you could get away with describing every single member as a "visual". Maybe it's got to do with the Japanese EP and how they crack that particularly lucrative market.

I haven't bought music in like 20 years. Google play/youtube subscription is all I use now.

This song is going to be huge:
NCT 127 - Superhuman

Yes, this song is awesome. I really like 7th Sense, but I think this might overtake it for my favorite NCT track.

I've given "Picky Picky" a few listens and I think it's pretty decent. I couldn't get into their previous song, "Crush" but I think the video had more to do with that then the actual song. I didn't like the message: "even though I'm a girl, look, I'm tough and can play with guns, power tools, and motorcycles- oh no, I'm actually totally incompetent!"

BTW, I was looking into BerryGood, because I'm completely in love with that song I posted. Apparently they've been around for a while and haven't had much success. So little success, that a couple days after this song was released, the leader of the group announced that she was leaving - apparently from frustration of not getting recognized for all their hard work. So- not a good time for me to have discovered them.

I'm liking the CLC comeback too. I loved Black Dress, but after initially liking No, it became too repetitive pretty quickly. Glad to have a new song I can fully get behind.

I'm liking the CLC comeback too. I loved Black Dress, but after initially liking No, it became too repetitive pretty quickly. Glad to have a new song I can fully get behind.

Yeah, I felt the same about No. I really liked parts of it, but it was a little too talky, which made it feel repetitive before long.

I just realized that I mentioned 4Minute, but there hasn't been any mention of them in this thread before. They were another 2nd gen girl group that I discovered just before they disbanded a few years ago.

This is the 4Minute video that ME most reminded me of:

And their biggest hit:

You're not going to mention 4Minute member, Hyuna, and her iconic song Bubble Pop? Legend has it that this was deemed too hot for Korean TV in 2011.

I've encountered both Hate and Crazy before as I've been exploring Kpop, but I've given them another listen and have decided I need to give more attention to 4Minute.

I don't think fromis_9 has been mentioned here yet. Love Bomb from last year was pretty awesome:

And now they're back with FUN!

And in case you're wondering how to say their name (like I was for a good long while) it's pronounced like "promise nine" only starting with an "F" instead of a "P".