Well, it’s that time of year again. That time of year when TLDP goes alliterative. This marks my fifth year of bringing you the D for December, and I decided to go with board games. Welcome to Disconnected December!

This week, I go asymmetrical and look at Space Hulk.

I think I’m going to need a bigger table.

My first experience with space hulk was with the PC version of the game, which was thoughtfully gifted to me by no fewer than three different people. I never got around to writing a review of it, because I’m not a good enough writer to cram “I didn’t like it, but I didn’t hate it” into a thousand words. It was my understanding that the PC game was a faithful representation of the board game, so why on earth did I spend $90 on a used copy at a boardgame store while visiting my mother-in-law?

Because that $90 board game has about $200 worth of Warhammer 40k miniatures in it, and I like painting them. That should explain it well enough. (Games Workshop figured this out too, which is why the game now costs $300 on Amazon)

But I also adore Heroscape, which is basically Warhammer for Dummies. I thought maybe playing against a human with plastic miniatures would be more fun than playing against an invincible AI.

I know: Who am I, and what have I done with Greg? Well, I should clarify that when I said “against a human” I meant a specific one: my wife. It turns out that she is also invincible at the game, but I don’t mind losing to her.

Anyway, Space Hulk is that rare bird that is a two-player board game, which makes it great for couples and other people who can’t rub two friends together.

To my disappointment, the Space Hulk refers to the setting of the game. One player is a team of elite space marines, sent by whoever they work for (no emails, please. They have not yet invented a device that could measure my indifference to Warhammer lore) to find out what happened to the Space Hulks, which are basically self-driving space semis.

The other player plays what happened to the Space hulks: an alien race called Genestealers which are nothing at all like the things that failed to eat Sigourney Weaver in five movies and a video game DLC pack. They’re purple, for example.

The game is wildly asymmetrical. The Space Marines are comically outnumbered, much slower than the genestealers, and with my dice-luck couldn’t hit the broad side of a space barn with a tactical nuke if they were standing inside the barn. Also, the Space Marines have to complete their turn before an hourglass runs out of sand. The Genestealers are comparatively weaker, but can spawn infinitely and can move a whole lot faster. They are not constrained by a timer, and can take as long as they want to complete a turn.

The combat is Warhammer combat. You point your figure at where you want to shoot, check to see if you’ve got line of sight and roll your dice. If you exceed a number, you kill what you’re aiming at. If not, you don’t, and if your enemy is in a position to counter attack, you die. It’s simple, and easy to pick up even if you’ve never played a tactical miniatures game before. 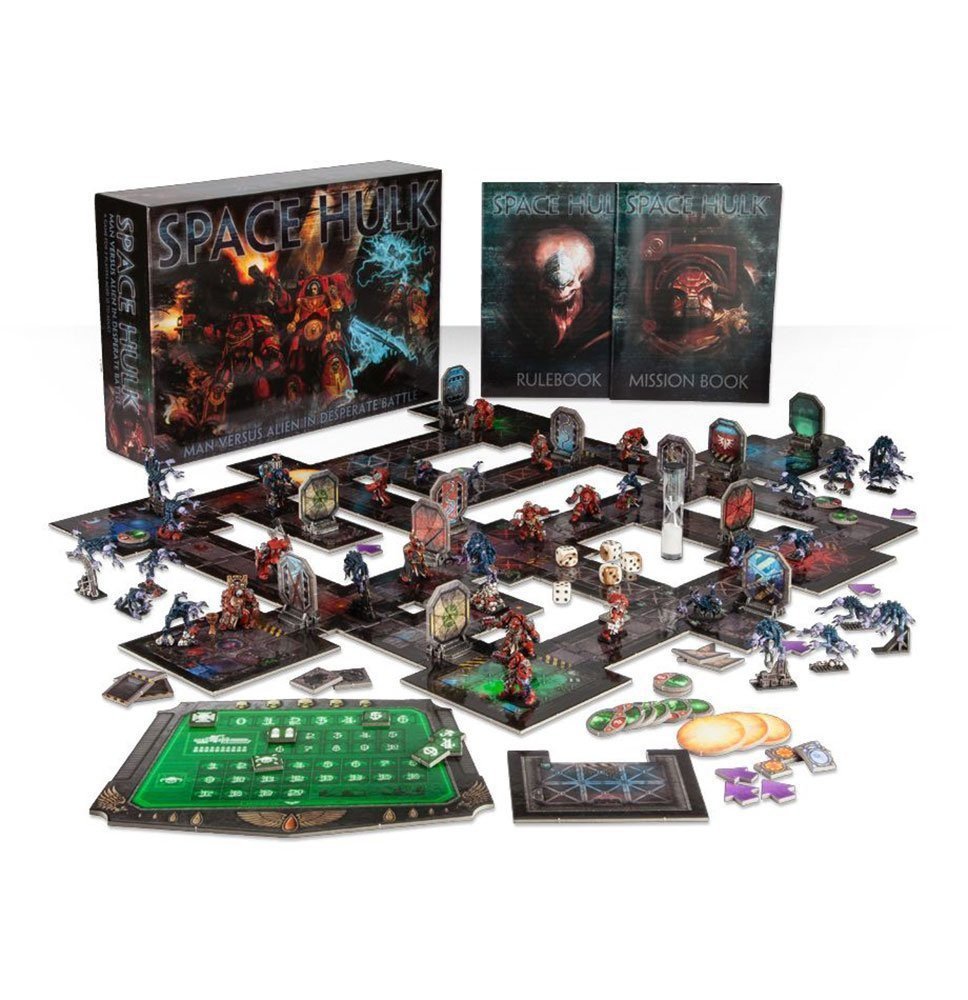 The complexity comes from the game board. Or perhaps I should say boards. Or perhaps I should say “bunch of tiles that you can use to make something resembling a game board.” The box comes with approximately twelve million cardboard rectangles of various sizes and proportions, all of which have notches cut out so they can interlock with each other. One of the game’s manuals describe a list of scenarios that each have a specific map layout, which you have to build before you can play. I find it fun to build the board, but it does make the “60 minute” playtime on the box somewhat misleading, as you’re probably going to spend at least twenty minutes building the enormous and complicated maps.

That’s another thing: If you want to play Space Hulk, bear in mind that everything is designed around 29mm scale miniatures, which means everything is scaled to 1/63rd of normal size, and these Space Hulks are huge. The table I played on was barely large enough to hold the entire map without bits hanging over the edge, and I wasn’t playing on some dinky little card table.

If you have a big enough table, though, there’s a lot of rewarding tactical gameplay to be had. What’s especially cool is how different the two sides are, because it means you pick your team based on your playstyle. If you like a lot of technical moves and attack variety, the Space Marines have you covered. If you like to muster your forces before charging in to overwhelm your enemies, then you can play as the Genestealers. It’s a perfect game for couples who like different kinds of board games.

Trust me on this one. I speak from experience.

Will I SMASH on?

This is definitely a game I intend to come back to. I’ll just need to buy a bigger table first.

Is it the Dark Souls of hulking games?

I’d say it depends on which side you’re playing. The Space Marines seem to be at a significant disadvantage, at least the way I’ve been playing them. That might just be the learning curve talking, and once I figure out the secret sauce the undersized tables may turn against the Genestealers. Also, if you have bad dice luck, you’re going to lose a lot, because there will be a lot of “but I had a ninety percent chance of hitting!” situations where you end up in the other ten.

But enough about my dice luck. The game itself isn’t nearly as hard to learn as it looks, and once you’re a few turns in, everything feels natural and smooth and you can focus on your tactics instead of the rules. If you can lay your hands on a copy, don’t be daunted by the fact that the box weighs about fifty pounds even after you discard all of the plastic sprues and cardboard edges. It’s a complex game that isn’t complicated, and you can actually learn to play it from the instruction manual, rather than seeking out a YouTube video explaining what the developers meant.

That’s probably the least dark-souls thing ever. One out of forty thousand soul points.

I like the board game reviews, keep them coming.

I like the board game reviews, keep them coming.

I might try to weave them into the regular flow of the coming year. My board game pile is almost as large as my video game pile.

Suggestions from the audience would be welcome, appreciated and probably acted upon.

I also have good reason to believe that I’ll be getting Gloomhaven for Christmas. And I know for certain that my wife is getting some D&D modules.