Well, it’s that time of year again: that time of year when TLDP goes alliterative. This marks my fifth year of bringing you the D for December, and I decided to go with board games. Welcome to Disconnected December!

For our first week, we’ll start with something light for those of you who have friends and family who are amenable to playing with elegantly painted cardboard, but aren’t quite ready to tackle The Campaign for North Africa

Sponsored By: 2 to 4 players

Someone decided to make a match-two game in real life. The real surprise is that it works.

The first thing you notice about Potion Explosion, when you open the box, is that there’s a freakin’ lot of cardboard in there. That’s because the central mechanic of the game revolves around a row of five gravity-based marble tracks, and you have to build it yourself. Don’t kid yourself: Construction is as much of a pain as you might expect – but once you get it together, it’s reasonably solid, and Cool Mini Or Not did us the courtesy of making the box large enough to hold it after it’s built. 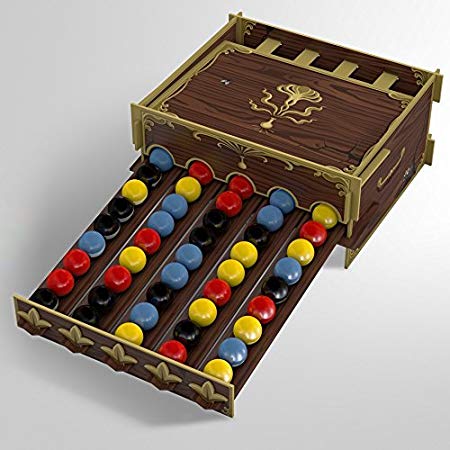 Part of me would have preferred the game to cost a little more and have a molded-plastic marble track, but for $32 I won’t complain too much. It’s sturdy cardboard, at least, and it doesn’t feel like it’s on the verge of falling apart or anything. In fact, the whole game has high production values. The cardboard is thick and stiff, the marbles are gorgeous, and the instruction manual is actually informative.

The object of the game is to be the best potion mixer in a potion mixing class that is absolutely not modeled on a popular media franchise involving lightning bolts and pseudo-Latin exclamations (EXPECTO LITIGATIO!). To become the best potion mixer, you take some cards that are shaped like potion bottles and try to match colored marbles (representing potion ingredients) to the recipes on them. This is where the marble tracks – and the name of the game – come in.

You’re allowed to pick one marble from the dispenser on your turn. Once you do this, new marbles will roll down from the dispenser to fill the slot. If the marble you picked results in a two or more marbles of the same color colliding, this is an Explosion ("Causatio Boom-Boom," in the manual) and the player is obliged to take all of the matching marbles, which may result in another Explosion. Theoretically, this could keep going until the track you picked the marbles from runs out of marbles. After filling your potion recipe cards to the extent possible with the marbles you’ve collected, you’re allowed to keep a few and then you must put the rest of them back into the dispenser. 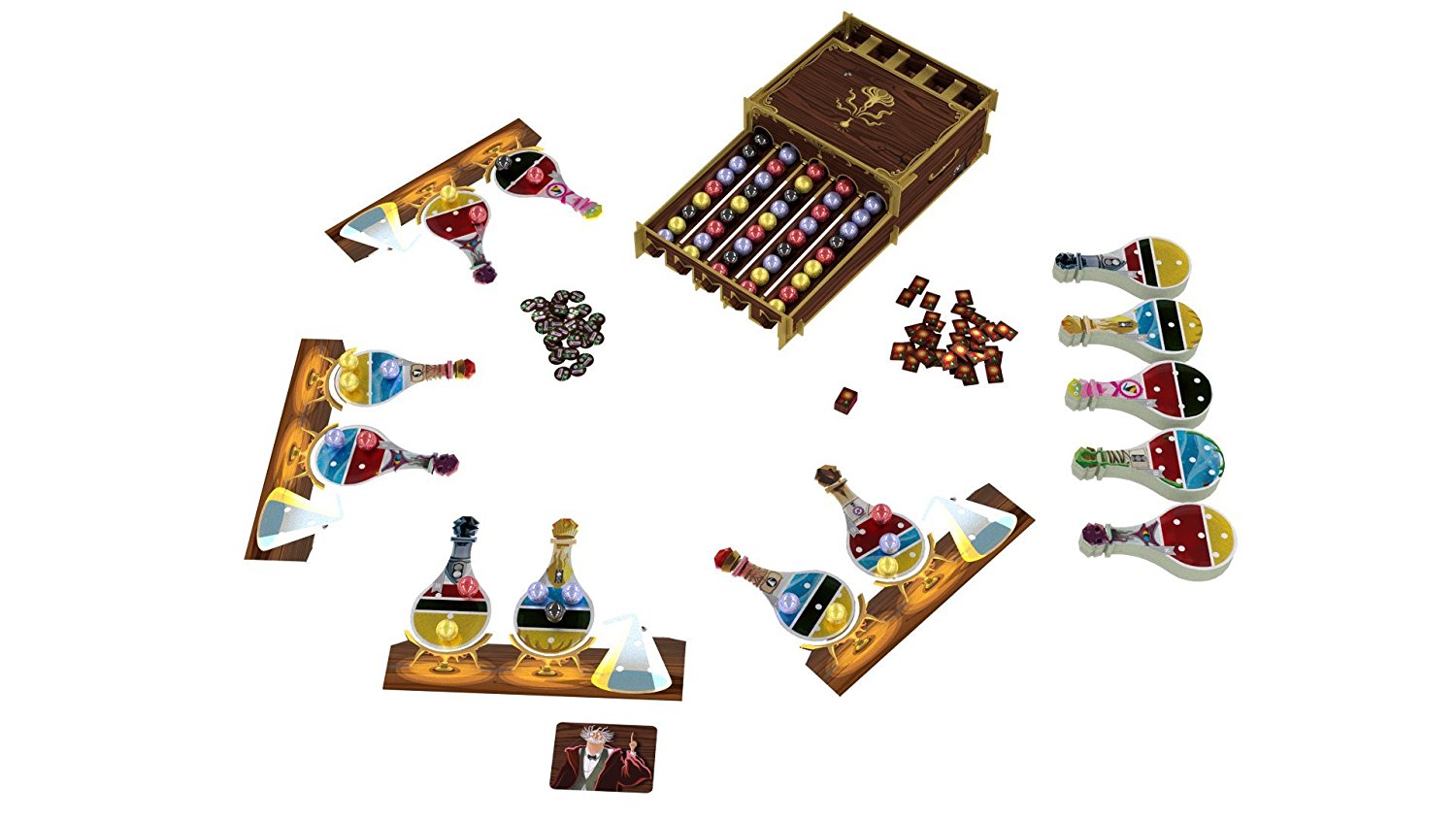 Now, if that were all there was to Potion Explosion, it wouldn’t be very interesting. After all, a particularly good run of luck could result in a player filling up several potion cards in one go. Fortunately, there is more strategy than just being good at match-three games.

Completing potions earns you skill points commensurate with the difficulty of the recipe, and you can also earn skill points by completing certain objectives (such as having three of the same kind of potion). The potions themselves can be used to give yourself powers that can affect the flow of the game. You can, for example, drink a potion that allows you to steal another player’s marbles, or to grab another handful of marbles from the dispenser. Drinking the potion doesn’t cost you the skill points you earned from making it, but you can only use it once.

All of this adds a few layers of depth to the game, because you get to pick new recipe cards from one of five stacks that are face-up on the table. This means you can go for complex potions with lots of ingredients that are worth more points, or try to spam a lot of easy potions, or you can shop for abilities that you think will turn the game in your favor.

Like most board games, this sounds a lot more complicated than it actually is when you’re playing it. A turn basically boils down to: Take some marbles, fill your recipe cards, put any unused marbles back, do some actions based on any complete potions, next player. And because you can store the assembled marble dispenser in the box, setup takes all of five minutes. Our first playthrough took about an hour, because we were playing it for the first time with a seven year old who felt a little cheated that there weren’t any actual explosions in the game – and quit a few turns in. Strictly speaking, the game is for players 14 and up, so that one’s on us. If you stay in the recommended age-range, I can see a game lasting around thirty minutes.

I very much enjoyed playing Potion Explosion. There’s a decent blend of strategy and luck (tilted more to the strategic side, which is good for me because I have the worst board-game luck in the history of board gamers), and the game pieces are just nice to handle. The game flows well, once you get used to what you need to do, and I can definitely see myself trotting this one out for a few rounds in an evening.

As a bonus, if you have anyone in your life that’s interested in a certain fictional school of witchcraft, this would make a fine centerpiece to a thematic shindig.

Is it the Dark Souls of board games

While there’s a decent amount of depth, it’s a simple enough game that you don’t have to be a Euro-gaming grognard to enjoy it. If you’re looking for a way to introduce someone to the magic of cardboard that wasn’t manufactured by Milton Bradley, but you can’t bring yourself to play Carcassonne again, Potion Explosion is worth a look.