Sponsored by: A review key

It’s a good year for boring-arsed games that prominently feature horses in their marketing material.

I’m kind of old-hat at this by now. I’ve played five different versions (13, 17, 19, the 3DS version and the Nintendo Switch version), and written reviews of two of them that you, oh most patient and forbearing of readers, have read.

The two marketing bullets are the new tractor license and the new livestock. For the former, they got the John Deere license, which might mean more to you than it does to me. I like John Deere, don’t get me wrong, but in practice you don’t get access to them right away, and I couldn’t tell you why they’re better than Husqvarna or any of the other dozen brands of tractors in the game. The John Deere license is for people who play simulation games for different reasons than why I play them. 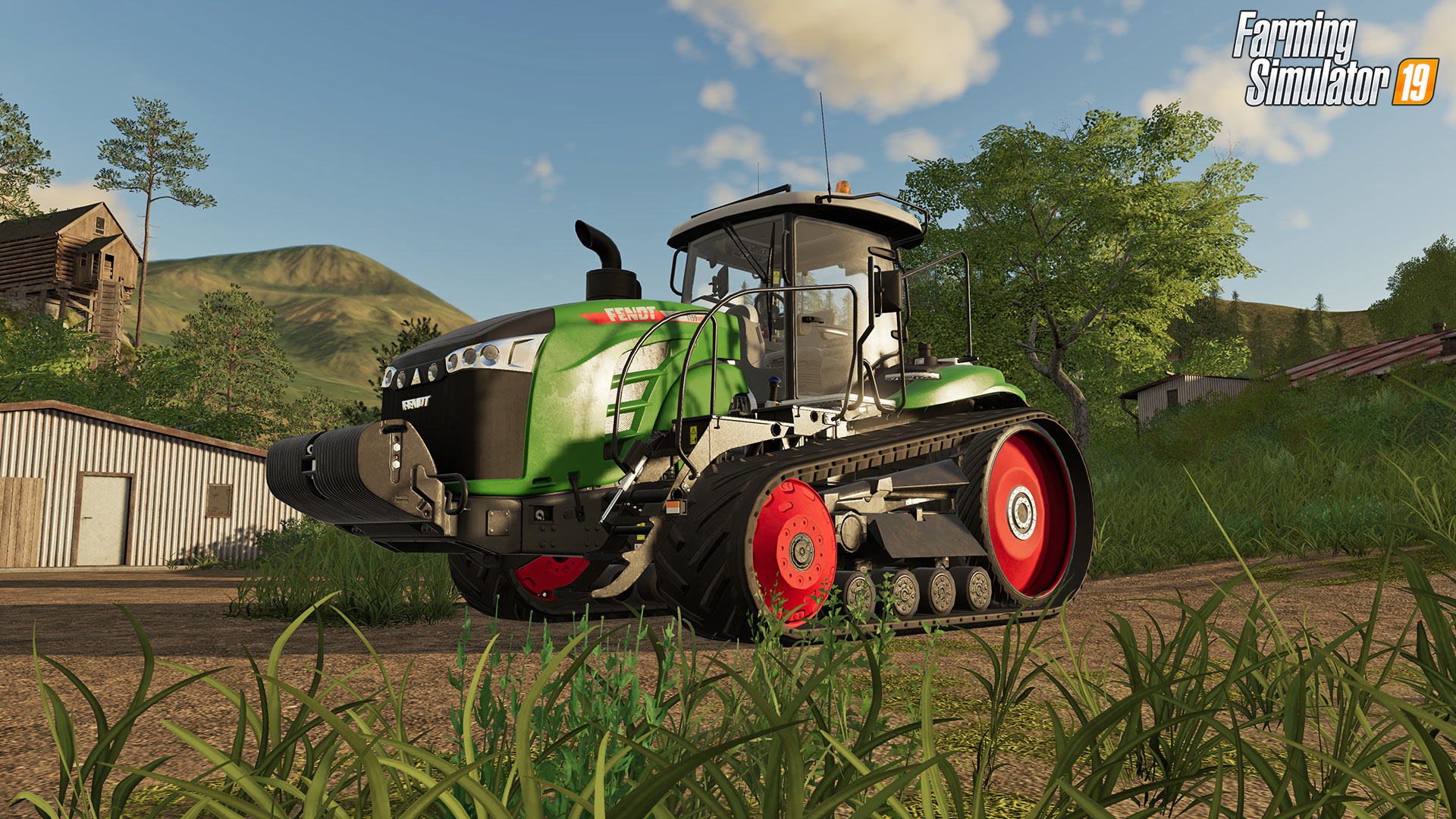 The horses are more interesting. I spent some time exploring the horse-care system, and am happy to report that it’s surprisingly good. I was expecting stiff, mechanical horses with the maneuverability of a table saw. I don’t know why I was expecting that. Farming Simulator 17 has some of the best chicken animations I’ve ever seen (there’s your box quote, Focus!), so it only stood to reason that the horses should be as good. Riding a horse feels like you’re commanding an enormous animal made almost entirely of muscle that doesn’t have to listen to you but does anyway because you give it oats that make it bigger.

Aside from the new animals and tractors, there are myriad minor improvements and forward steps. The tractor animations have a lot more heft to them. Previous versions of the game had tractors that handled like Ertl die-cast models. The tractors in Farming Simulator 19 have cabs and wheels that bounce along independently as if they’re made of interlocking pieces of metal that flex instead of like wooden blocks with wheels glued on. Also, the harvesting animations are more detailed. Corn stalks wobble and fall in more believable ways, which is a welcome improvement. 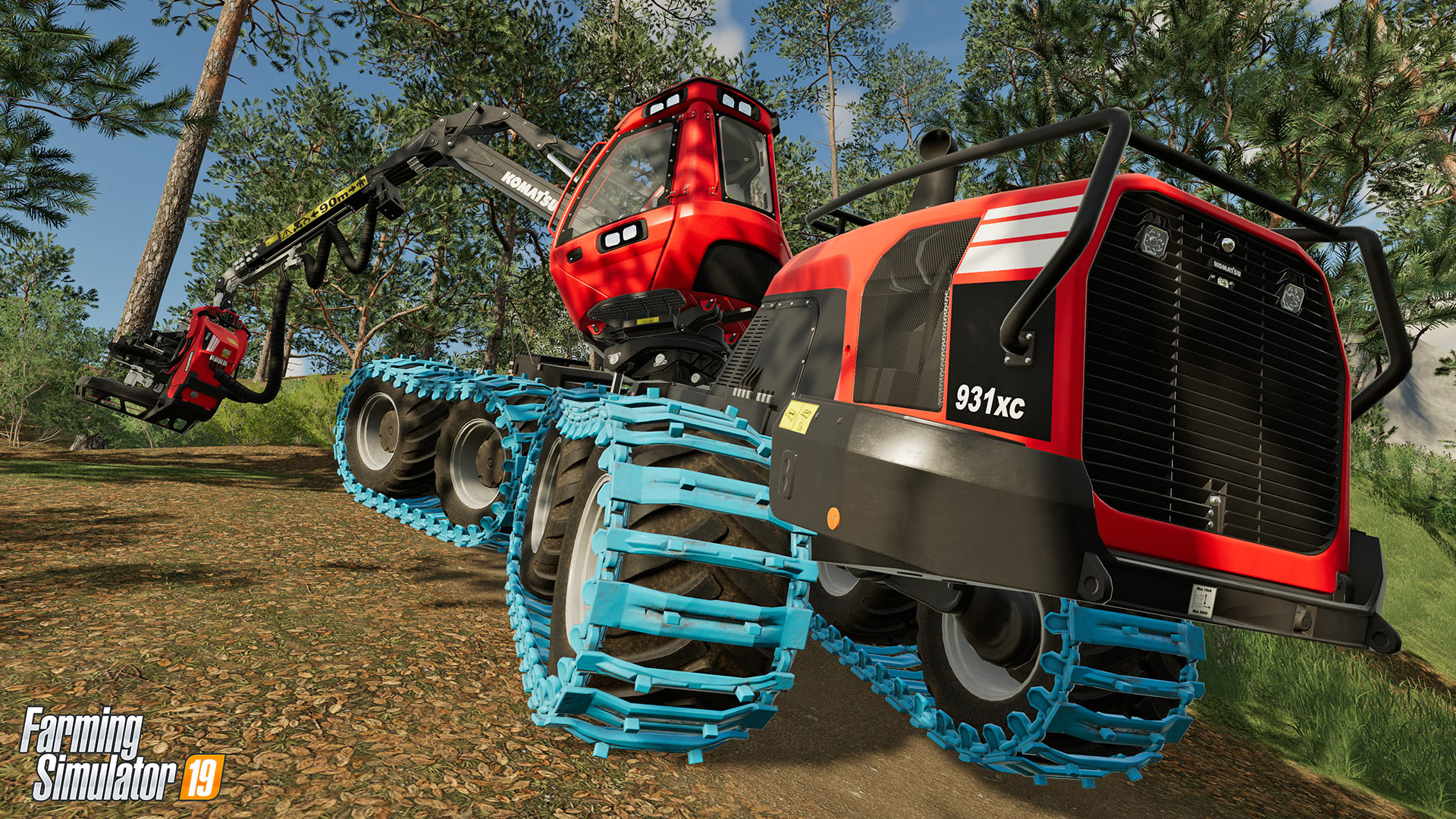 The Farming Simulator series has been trending toward being a bit more video gamey in recent iterations. In 13, you could take on odd jobs from bulletin boards around town. You had to have your own vehicles and tools to do the jobs, and you usually had to just know what tools you’d need. In 15 and 17 you just rolled up to a field and asked for work, at which point the vehicle appeared and you did the job within a time limit. That approach has a lot to recommend it, but it’s not very simulatey. In 19 they struck a good balance. You can pull up jobs from the menu, which tells you which equipment you’ll need. You can use your own, or lease the gear you need directly from the menu and pick it up from the vehicle lot near the middle of the map.

You’re also responsible for the whole job, not just one part. So, if you’re harvesting someone else’s field, you have to harvest the field and deliver the harvest to wherever the owner wants you to take it. To help this go smoother, they allowed you to hire workers for contract jobs, which I don’t believe was possible before. Having the option to drive the truck next to the harvester so the pipe could fill the trailer on the fly was an enjoyable experience, and I look forward to doing more of it. Sadly, it’s not all good news. They seem to have added a good deal more jank than was in the previous games. At one point I was trying to walk up a hill near a (beautiful, I hasten to add) waterfall, and I ended up clipping in an odd way that made my character rise up, up, up like he was riding an elevator. Fortunately there is no fall damage, so dropping from that height didn't break anything but my immersion in the game.

That said, it’s a European Simulator, and the fact that Farming Simulator was so lean of jank was pretty unusual. Maybe they added what I’ve decided to call the Grain Elevator bug due to peer pressure.

Will I farm on?

If you’re a fan of Farming Simulator, then there’s a lot to do in 19. The updates have a curious quality about them that makes them sound small on paper but play big in practice, sort of like a Batman: Arkham sequel in reverse.

If you’re new to the series, and don’t care about John Deere or horses, then I wouldn’t recommend it as an entry to the series. I think 17 did the best job of making the game accessible to new players, and if you own a Switch then that version is a no-brainer if you just want to get your feet a little muddy.

But in answer to the question, yes I will keep playing. I have loans to pay off, after all.

Is it the Dark Souls of Mundane Simulators?

It’s got more systems than previous versions, and the tutorials are, let’s be honest, lacking. But I still can’t say it’s the Dark Souls of simulators. That still goes to the Spintires series.

But if you play only one methodical, boring game in which you do chores for people and raise horses this year, this is the one I’d pick.

Three out of twelve grains.

I'm a new FS player, and they've put me off with the jank, a lack of tutorials (there are tutorials but they tell me very, very basic stuff) an overwhelming amount of equipment choices without much in the way of suggestions where to start, and the kicker for me.... no seasons. In a farming simulator, really?? I mean, I was disappointed that seasons aren't in Euro Truck, but in a farming simulator it just seems like a bizarre omission after this many iterations. Hey ho, I'm glad I tried it, but my boring, methodical, mundane game of choice remains ETS2. No horses though

Greg, great write-up as usual. Your wry sense of humor is always a treat to read.

I just got my new gaming laptop setup so I'm super looking forward to diving into FS19.

I'm really curious about the new farm-building feature. It used to be that you'd have a pre-set home-base farm and you simply augment it by purchasing fields of various sized around the map.

But now you buy a section of the map (various sizes) and own all the fields within its borders. More importantly, you can purchase and place actual buildings of all types on that plot, kinda like a city-building game. There are even difficulty levels at the start of the game where you start out with nothing and have to take odd jobs to finance vehicles, equipment and farm structures (sheds, granaries, animal pens, etc.).

Like you said, John Deere is a great get and all, but I'm far more interested in the new land building & management systems. Along with the new vehicle/equipment repair dynamics, etc. Feels like Giants have really layered a lot of new systems into the game this time out.

Can't wait to dive in proper!

Kergguz, the modding community for Farming Simulator is one of the most active groups I've seen for just about any game. There's literally hundreds of mods across multiple dedicated websites. If there's something you think the game should have, chances are there's a mod for that.

Seasons for FS17 is a thing so I imagine it's just a matter of time before it gets a FS19 update. That's actually how it works for each new Farm Sim release. Over the initial months of a new release, modders work on forward-porting the most poular mods from the previous game. Here's just a sampling of a few sites that I have bookmarked.

Since writing this I played around with the farm-building aspect. I started at a difficulty where I had a few fields and buildings, but inhadnt earned enough money to buy more land yet. Instead I sold the cosmetic buildings I started with and built some functional stuff— horse pens and the like.

It feels a little like the base building in Fallout 4 in placement. What’s interesting is how the cost of a building can change depending on where you build. You can put something on uneven ground, but it will cost more because you have to level the land. This is all handled in the store— no bulldozing in 19, maybe in 21.

I like the steady forward pace of the games. They’re always making the simulation bigger, but not overreaching to the point where they turn out a broken product. It’s a case study in under-promising and over-delivering.