Sorry, Legion. I should have been more specific. I meant that signing AP has been difference-making for Washington.

If he keeps banging in 100 yard rushing games, then I can see them winning at least 4 more.

Whereas I can't see NY winning more than one extra game this season, irrespective of what Barkley does.

I think Washington's difference maker is the defense that has gone from 27th ranked a year ago to 5th ranked this season.

Not to take away from Peterson, who has wildly outperformed any reasonable expectation of him this year. But they've remade themselves on the other side of the ball. Jonathan Allen was on track last year before his injury, and with him back and developing into what he was expected to be, along with some other pieces, they have gone from near the league-worst to near the league-best.

Yeah a defense that gets stops will make any runner better.

Only about 24 hours after Tyronn Lue got the ax! I wonder if any other city has ever fired two pro coaches so quickly.
...
...
...
Oh, who am I kidding? This is Cleveland, so probably not.

Unrelated: The Panthers were awesome on Sunday. *That* was the league's top defense?!

The event that made me a football fan for life was the Cardinals drafting OJ Anderson. It didn’t matter that the Cards lost and lost and lost, I was there every Sunday in front of the TV to see if he was going to run for 100 again.

So is it the Todd Haley Browns, or the Gregg Williams Browns?

Hue Jackson didn't win a single road game in two and a half years as a coach.

Sounds like Hue Jackson may be a fit to become Kansas’ next head coach.

So is it the Todd Haley Browns, or the Gregg Williams Browns?

Haley fired, so that kinda narrows it down.

Though it could be Al Saunders. 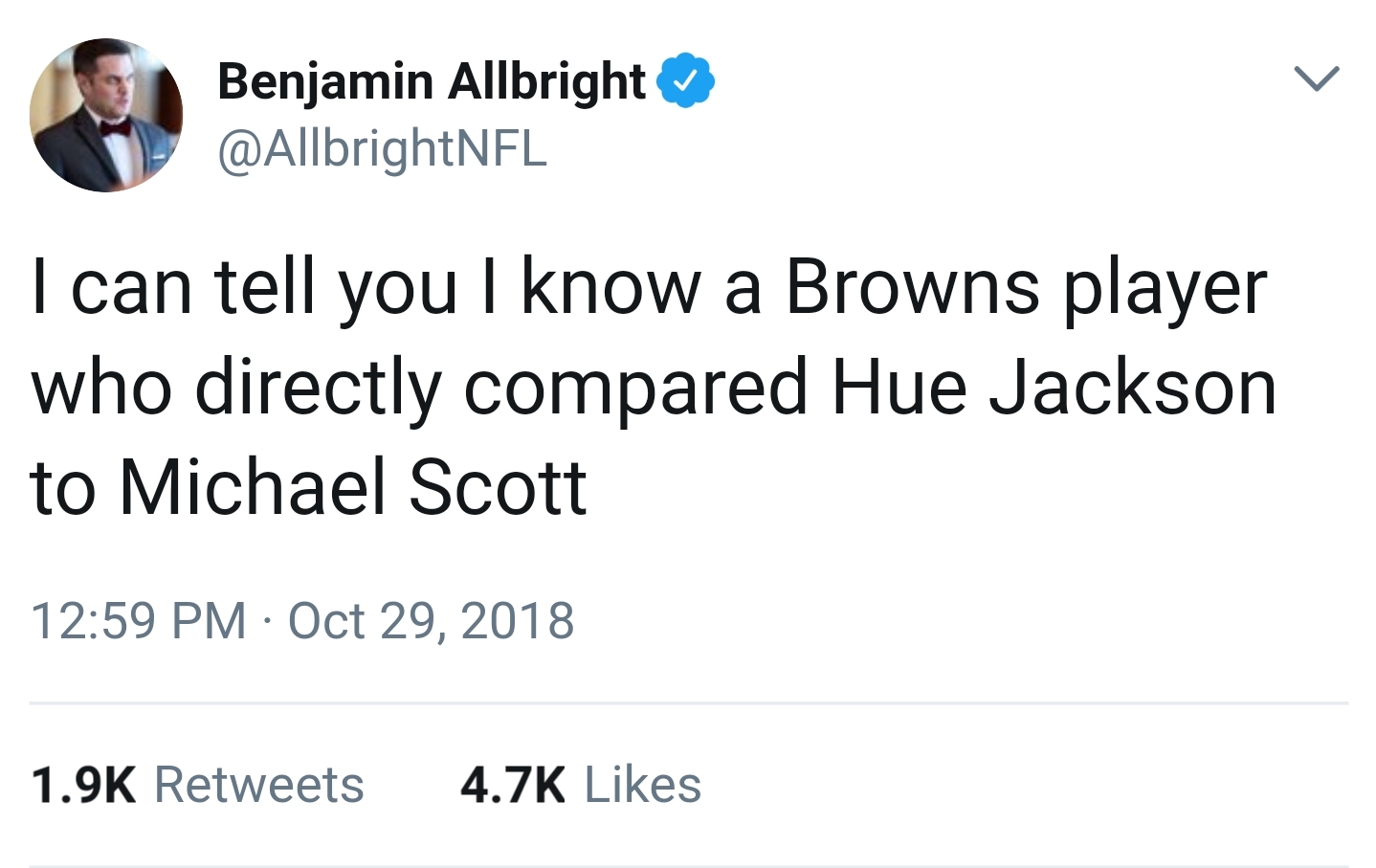 So instead of the backstabber, they promoted the psychopath.

One hour ago, there were a bunch of news reports that it would actually be Saunders: 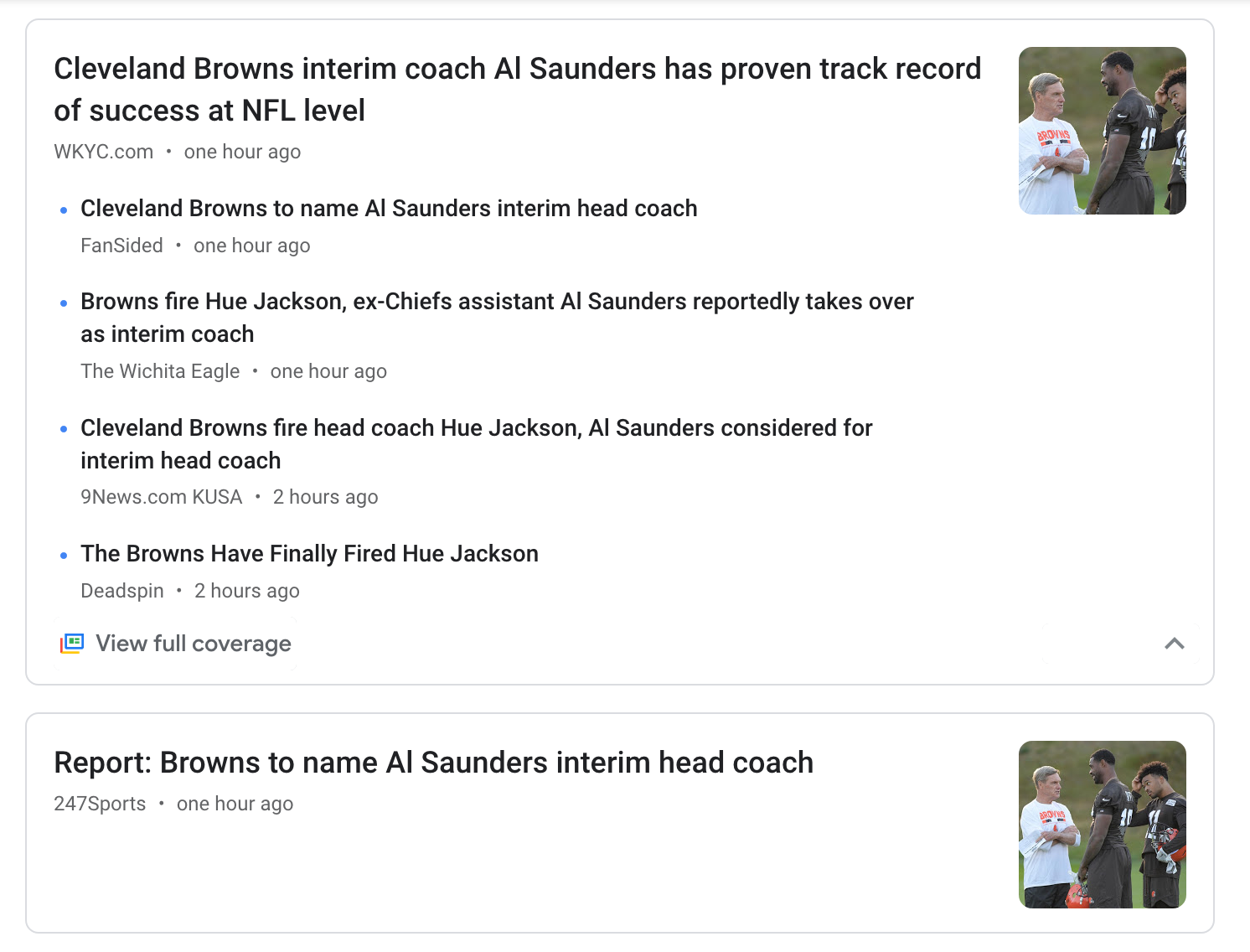 In case you were wondering if the interim coach hiring wasn't Browns enough, they managed to publicly waver between their options.

EDIT: The top story on Google News for "Gregg Williams" is brilliant timing:

Never has a video been so appreciate for so long.

Only Cleveland could be a 2.5 win team that makes me feel better about my 1 and 3 win teams.

David Jacoby has a poll up asking who the Browns head coach will be. At the moment, the Rally Poossum is getting smoked by Shirtless JR Smith 84%-16%. 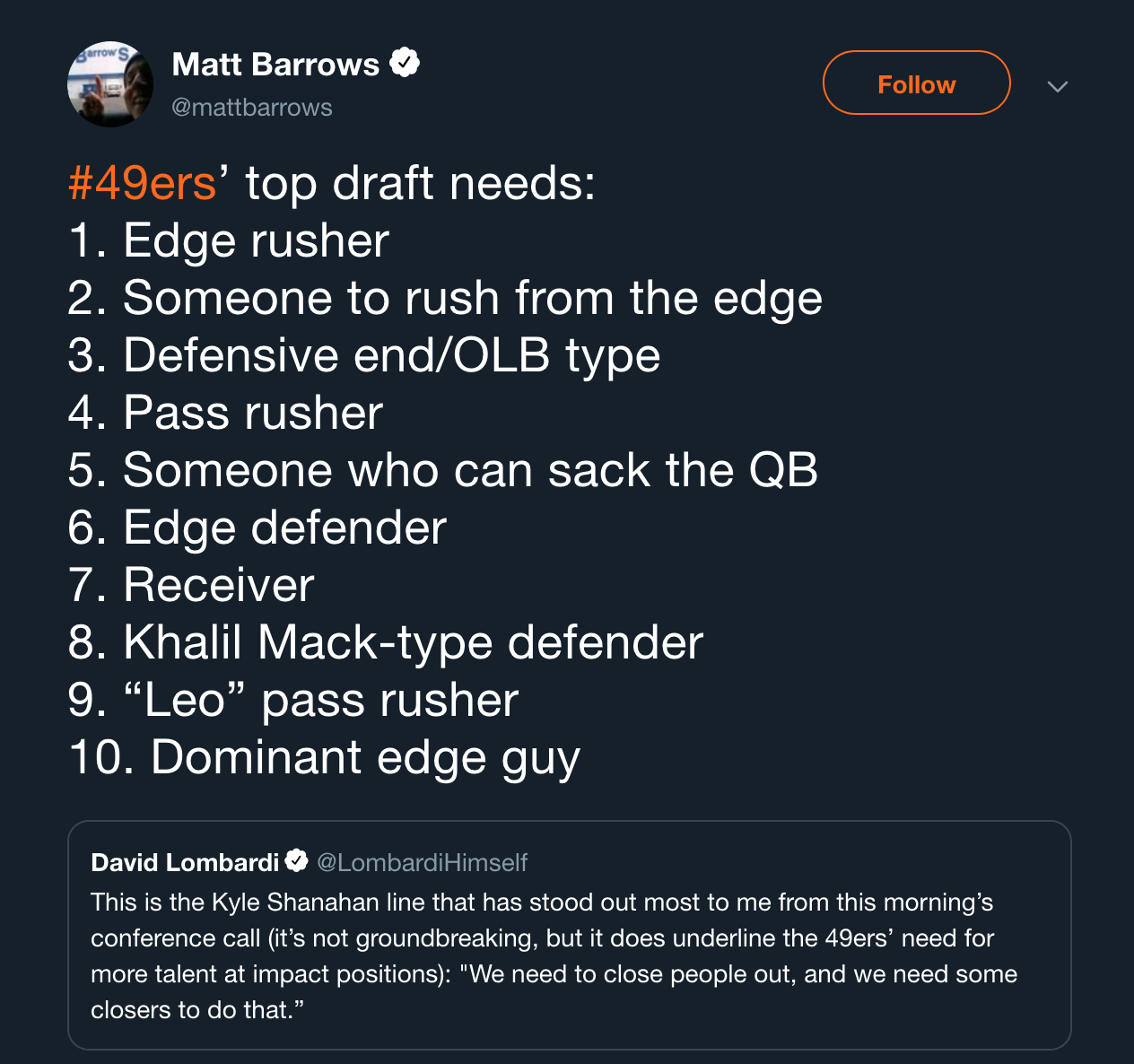 So true. They need to draft edge rusher at every pick they can fit it, and find one in free agency too.

It's so gonna be Dante Fowler.

Does the Countdown crew get hazard pay for working amongst Bills tailgaters?

And when I think of Buffalo, New York, I immediately think of Gavin Rossdale.

Jaire Alexander highlights from this weekend. Some amazing pass breakups.

Jaire Alexander’s 5 passes defended vs. the Rams are the most in a game by any NFL player this season and ties the most ever by a rookie.

Sooooooo same as last year then.

Looks like Winston may be done in Tampa, although for performance reasons so it is not like the Bucs did the right thing.

Sooooooo same as last year then.

BREAKING NEWS: Team that was 3-13 last year is still bad!

Not that they haven't put some effort into that O-line. The left side is the best it's been in a long time, between Nate Solder and rookie Will Hernandez. (Don't be too rough on Solder for getting beat by Jonathan Allen in that Twitter clip, he's an elite prospect who is starting to play like it). Solder may be overpaid, but if you judge it as paying him to not be Ereck Flowers, it's money well spent.

But the rest of the line is still hot garbage. Next offseason needs to see the same kind of investment (proven starting caliber free agent, early round draft pick) on the right side.

I agree that the left side is certainly in better shape then the center, RG and RT. I have a feeling that it will be a few years until the Giants start having winning seasons again. They have to strengthen their Oline, QB, LB, CB positions. The bummer is that next years QB class is not strong and the DL have more talent than OL.

Looking at the Browns, one cant help think what a different situation they would be in if they had won those OT games.