Sponsored By: We Are Fuzzy (review key)

Full disclosure: This is my basement: 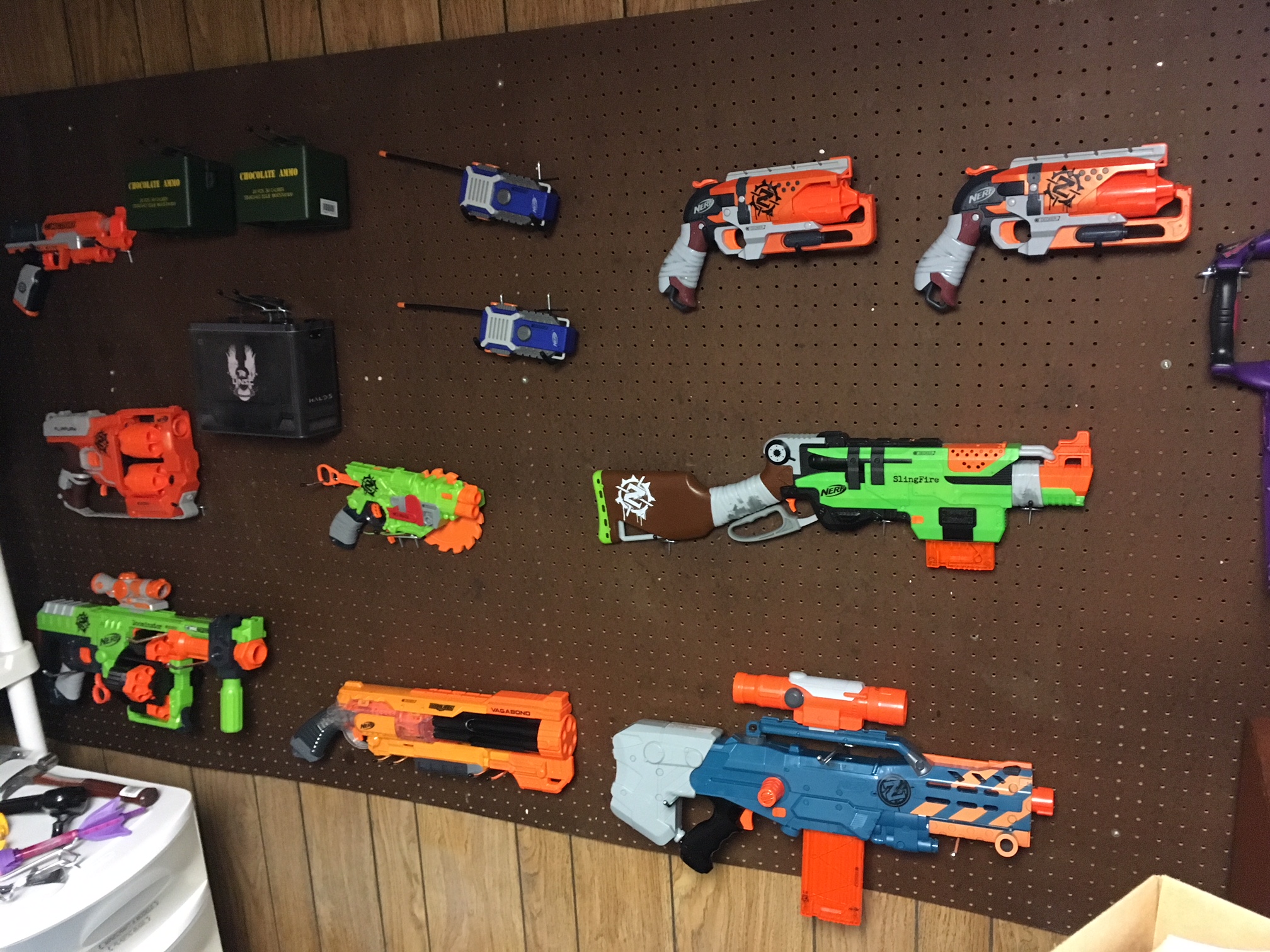 I post that so you know where I’m coming from when it comes the subject matter of the game I’m about to tell you about.

Sleep Tight, as you may recall is a game about defending your pillow fort from the monsters that come out at night. Not content to rely on the magical defensive properties of blankets, the protagonists of Sleep Tight have decided to push the enemy back. Armed with only an impressive armory of dart guns and enough couch cushions to supply an Ikea for a year (they’re in the catalog under “küssyn”), your task is to see how long you can hold back the monstrous horde.

In the first level you have whatever starter weapon your character gets, and you have to survive the night with only your dual-stick skills. Survive the first night, and you’re given a certain amount of daylight to spend on your defenses. There are four stations to work at, and they each exchange daylight for different things. Will you reload your dart gun, buy new guns at the toybox, get some sleep and replenish your health at the bed, explore the tech tree at your desk or build more defenses at the workbench? It’s all up to you – but choose wisely, because once you run out of daylight, night will fall and bring with it the next horde of monsters. 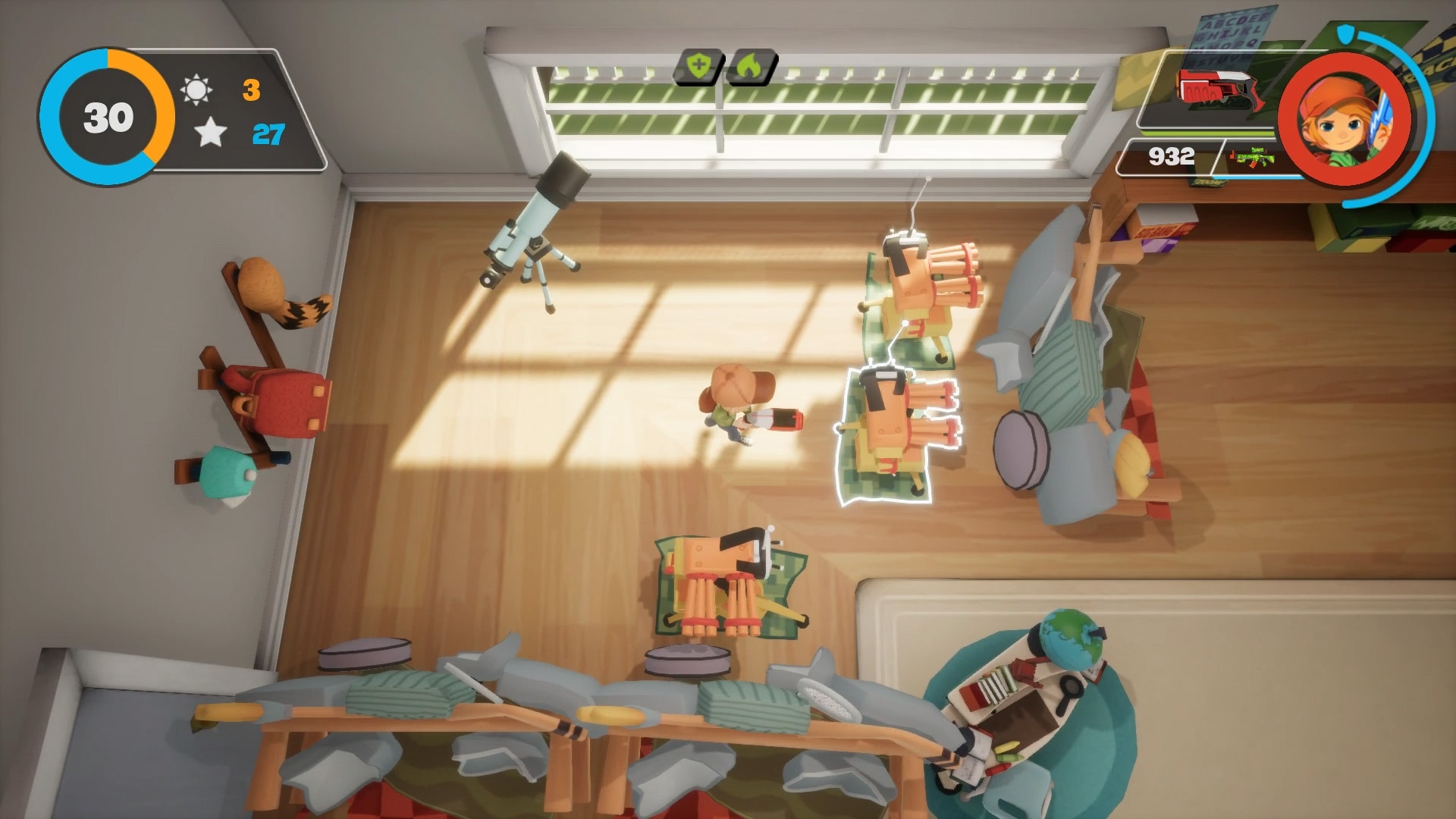 Using daylight as currency is an effective way to build tension in the game, because like real daylight you can’t save it for later (no matter what Congress thinks – heyoo! Topical humor!) and you have to spend your daylight all on the day you get it. This eliminates the late-game problem a lot of tech-tree games have, where you have amassed currency even after buying every option and upgrade.

You have two basic options for defenses: couch-cushion walls and dart-gun turrets. They’re both upgradable at the desk, and upgrades cost both sun and stars (more on those later). The upgrade path for the turrets remind me of the engineer’s turret in Team Fortress 2. It starts with a lower rate of fire, can be upgraded once to a high rate of fire, and upgraded a second time to shoot missiles. Likewise, you can upgrade the walls to have more hit-points and, eventually, to be wrapped in barbed wire. One can only speculate as to what your character’s parents do for a living, and why they leave him or her unsupervised with bolt cutters during the day, but it’s a video game.

The star currency, incidentally, is another good tension builder. Monsters drop stars when they die, but if you’ve built your fort right, they die outside your fort. The stars will disappear over time unless you go pick them up, so you have to leave openings in your defenses so you can run out and collect the stars, otherwise you won’t be able to upgrade your defenses. It’s probably one of the best ways I’ve seen a tower-defense game get around the problem of having the late-game play itself without simply resorting to sending hordes of bullet sponges at you.

Graphically, the game is colorful, sharp and clean. If pressed, I honestly couldn’t tell you how sharp is different from clean, but I like to use superlatives in threes.

My own writing deficiencies aside, the game looks good. It’s hard to say whether the developers achieved their goal of letting you play a Pixar movie, because Pixar is all about the eyes, and you usually can’t see anybody’s eyes while you’re looking down at them from the ceiling light fixture. 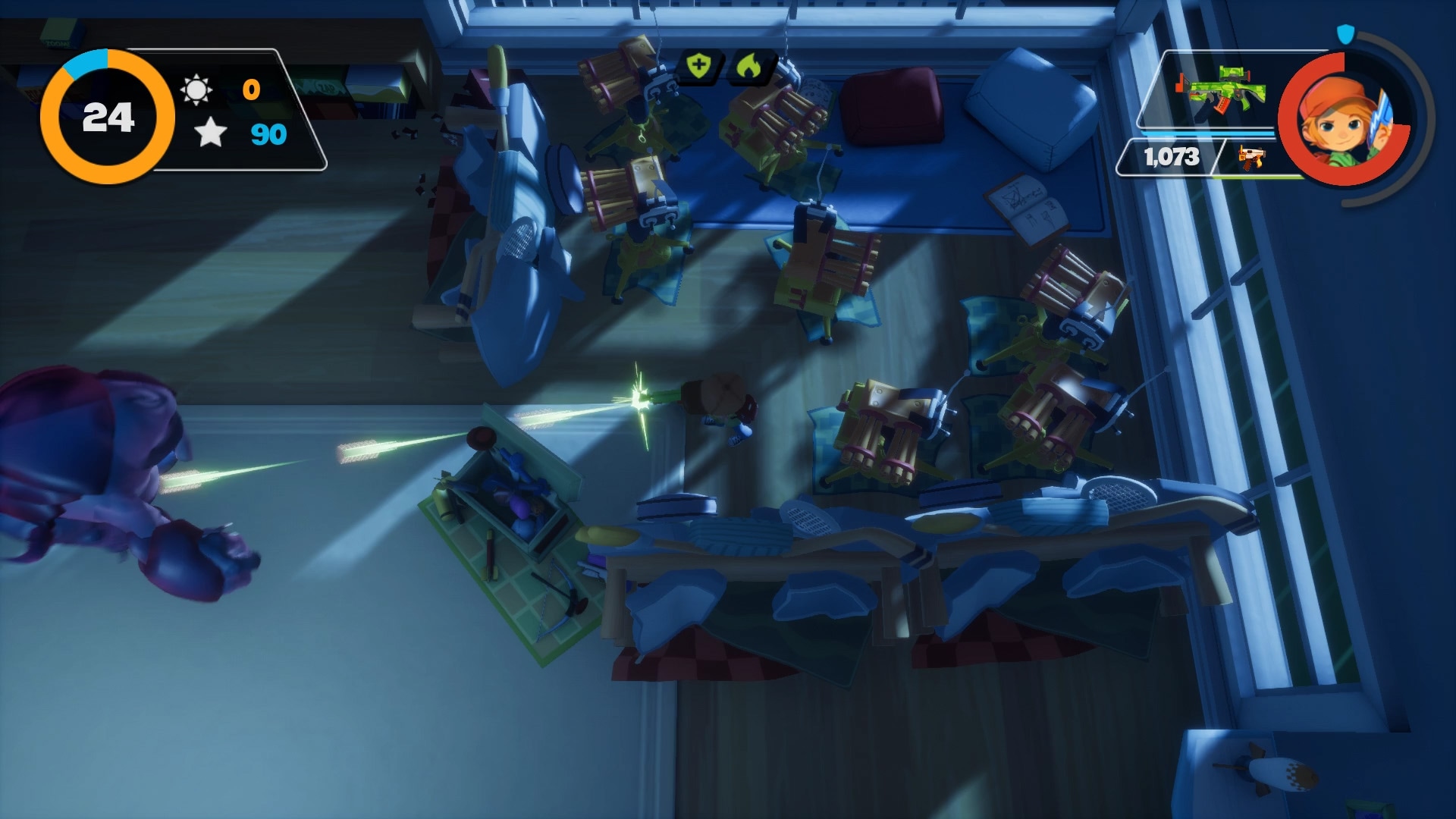 The monster-design is good, and I like the variety of playable characters you can unlock. On that note, I thought it was a nice touch that the characters unlock by using a playstyle that the character in question’s special abilities best compliment. So if you run a turret-heavy defense and try to avoid using your dart gun, you’ll unlock a character that’s well suited to automated defenses. I’m not ordinarily predisposed to like games that lock content behind a skill wall, but at least Sleep Tight doesn’t do it in an arbitrary way.

The only problem I ran into with the game is when loading a save. It didn’t work on the build I got, and whenever I tried to load a save, the camera would bug out and try to look at the game level through some level geometry, as if it got stuck in the ceiling. Pausing still worked, and I could hear my character moving around and even, by blind luck, interact with the upgrade stations, but the save file became unplayable and I had to start over. I don’t know how much you care about saving your progress in a game like this, but if you do then I’d wait for a patch before progressing too far with anyone.

I think the best thing I can say about the game is that I still plan to buy it for the Nintendo Switch, even though the developers gave me a Steam copy to review. I’m not even weighing whether I should continue playing the game on PC while I wait for the release date, because playing the game with the base characters is still fun.

Yep, I’ll keep playing. In fact, I’m going to go play it after I finish this review.

Is it the Dark Souls of games that keep you up at night?

That doesn’t mean you shouldn’t buy it (the Dark Souls scale is a satirical poke at the arbitrary nature of review scores and an old local meme that is probably past its prime by now, but I’m too committed to the format to change it). Sleep Tight is definitely worth a look if you were a fan of Orcs Must Die, or Crimsonland, or Toy Soldiers. In an era where you can spend $60 for a remake of Final Fantasy 6, $15 for a fresh blend of tower defense and top-down shooting is a steal.

Please don't ever get rid of the Dark Souls scale.

I think the best thing I can say about the game is that I still plan to buy it for the Nintendo Switch, even though the developers gave me a Steam copy to review.

I'd say that's a pretty strong endorsement. I don't know if it's just your writing style, but the game does sound like a lot of fun. I'm tempted, but I think I'll look at some gameplay footage cause it's not a genre I'm used to.