Turns out Man City were playing Football Manager this week. 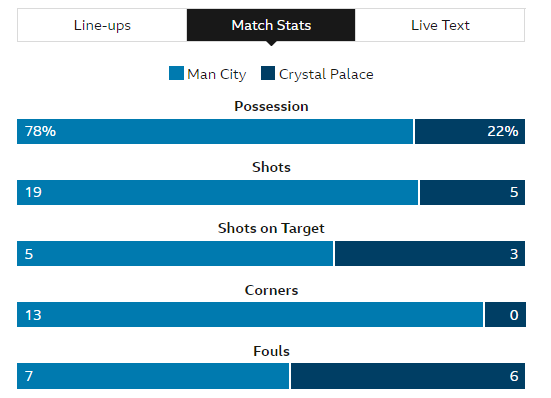 I heard that the last time Palace beat Manchester City away was 1990.... which happened to be the last time a certain Merseyside club won the League.

I fully expect Cardiff to get absolutely smacked on Saturday, with an immense performance from Pogba. It’ll be the players ‘it was him, not us’ statement.

And Bob's your uncle.

I cannot believe this was the first time they hit 5 goals since Sir Alex left.

And finally, Fulham finally got a clean sheet....

I heard that the last time Palace beat Manchester City away was 1990.... which happened to be the last time a certain Merseyside club won the League.

Did some checking on that and as far as I can tell it happened in December so it would have been the 90-91 season and not the 89-90 which Liverpool won.

Lord bless Sir Roy of Hodgeson. And what a goal from Andros Townsend

Read a comment somewhere that said Hodgson is loved right now by Liverpool fans more than at any point while he was in charge of the club, which sounds about right.

I have to post this from The Observer’s half season fan reports. for each EPL team. This is for Manchester United:

Stars/flops Martial has been in a rich vein of form: hopefully he’ll go on to build on his impressive goals to games tally. Pogba is the obvious flop. When your manager describes you as a virus, you know something is seriously wrong. I honestly thought when he came back after the World Cup that he would knuckle down. He should follow José out of the door, and take his poisonous sycophants with him.

Happy with the manager? With Ole Gunnar as an interim, hopefully there’s some kind of structured plan in place for a long-term successor. In the short term I think he needs a strong assistant, though: it’d be highly beneficial, and entertaining, if he brought Roy Keane in.

I find it hilarious that after all the problems that Mourwhino had with his approach, a Man U fan thinks Roy Keaneis the answer. They’d crash to relegation if they bought him in. Sure Pogba clearly has attitude issues, but I’d have attitude issues if I were managed by either Mourwhino or Keane I reckon.

A great note I saw about Liverpool:

Salah is probably the best attacking transfer in the last few seasons (certainly, best since de Bruyne), Virgil Van Dijk the best defensive, and they came in back-to-back transfer windows. Klopp, and whoever is in charge of Liverpool's transfer policy deserve an absolute shedload of credit.

Not to mention Shaqiri who scored two goals in 17 minutes after coming off the bench last week. Solid value pickup.

The last seven teams to score six or more goals in a Premier League game:

Egads what a goal explosion today in Liverpool!

First time Tottenham's Fab Four have all scored in the same game.

Rough day at the office, but fair play to Tottenham - they were simply better across the board today.

Rough day at the office, but fair play to Tottenham - they were simply better across the board today.

I was watching, and when it nearly went 2-0 Everton, I was thinking of posting here: "I think it's fair to say that Everton has arrived."

Three points tomorrow would be amazing.

But I'm rather pessimistic about that happening. Wolves are twice the team Fulham is right now.

Bit of a screamer to win it for Leicester.

What a crazy shift of momentum in the past couple of weeks! Man U, Liverpool, Totenham, Man City, all things going tipsy turvy. I expect Man City will reorient themselves shortly, but that early January match vs. Liverpool will be HUGE. Almost feels like a must win for City.

Damn, so close! On a positive note, only one goal conceded in the past couple of matches!

Pretty pleased with the goal explosions Tottenham has been having, especially since Son has been going off!

Bit of a screamer to win it for Leicester.

I mean, I thought City would lose eventually, but back-to-back games to Palace and Leicester I did not have.

Also, this freaking season. EUGH. Fulham can't win a damn game, Thierry Henry's in way over his head at Monaco, I don't think I'm getting anything I wanted this year.

That's it, I'm a believer! I'm offically in the getting excited about Leeds been in the premiership next season (or see what beautifully Leeds way we blow it) 2 goals in injury time saw us come back from 2-1 down to win 3-2 against Blackburn. What a team.

Blimey. 6 points clear and City faltering a little, and Spur showing their potential (players telling Poch they don’t want him to go?) I would never have put that as the Scenario at this point of the season.

Still a long way to go. Once we are through the arsenal and City matches I might be more prepared to think about possibilities.

My head says it’s still open, my heart though:

I told my Liverpool buddy at work that it's time for me to start cheering for whoever is playing Liverpool. Sorry!

Heard on the Football Weekly podcast:

this seems entirely too ridiculous to be true, and given that it’s daily mail take with a grain of salt, but what the actual f*ck

I mean, I feel like we've seen equally crazy contract clauses before. Grain of salt for the Daily Mail, but I can believe it.

I find it hilarious that after all the problems that Mourwhino had with his approach, a Man U fan thinks Roy Keaneis the answer. They’d crash to relegation if they bought him in. Sure Pogba clearly has attitude issues, but I’d have attitude issues if I were managed by either Mourwhino or Keane I reckon.

Oh, I'm not surprised. I think there are a fair number of people who think that, by dint of being "the boss", you can treat your employees as crappily as you want and if they don't turn in good results, it's on them for not being professionals. All of these people are, or would be absolutely awful bosses.

Keane clearly thinks this way, which is part of the reason why he's never been a good Manager, although he'd certainly prefer to just blame Millenials like the out-of-touch, intellectually lazy old dinosaur he is.

People always talk about Sir Alex Ferguson and the hairdryer, completely forgetting that he also knew when to put his arm around a player, when to praise them, defend them and build them up. Mourinho just isn't built that way and he doesn't appear capable of getting the dressing room behind him anymore.

EDIT: Also, reading his wikipedia page, at each of his last three stops, Mourinho has publicly fallen out with each of his best players. He fell out with Ronaldo at Madrid, with Hazard at Chelsea, and with Pogba at United. Again, if you're Roy Keane, you can blame today's players for being soft and so on. Or, alternatively, you could notice that since Mourinho left, Ronaldo has continued to be one of the greatest goalscorers ever and Hazard has been the best player on Chelsea. Who knows what'll happen for Pogba, but I don't even get how this is a debate. Mourinho's sh*t gets old after two seasons, and it's literally been the same thing since he got the Madrid job. 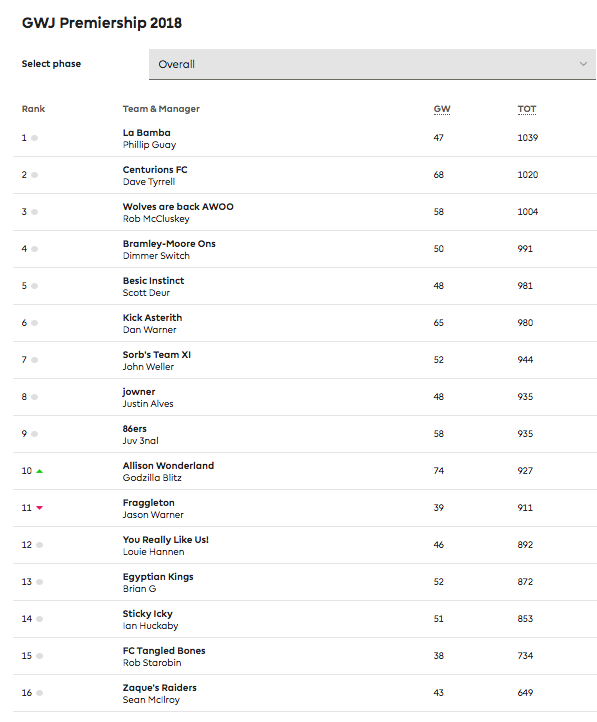 If Wenger still managed Arsenal I'd be browsing ArsenalFanTV after this match for amusement.

Going to be interesting if Arsenal finally get around to starting their rebuild. Way too many important players in their squad are in the decline phase of their careers.

To be fair to Arsenal, their entire starting back line was injured today. A demolition was always a possibility.