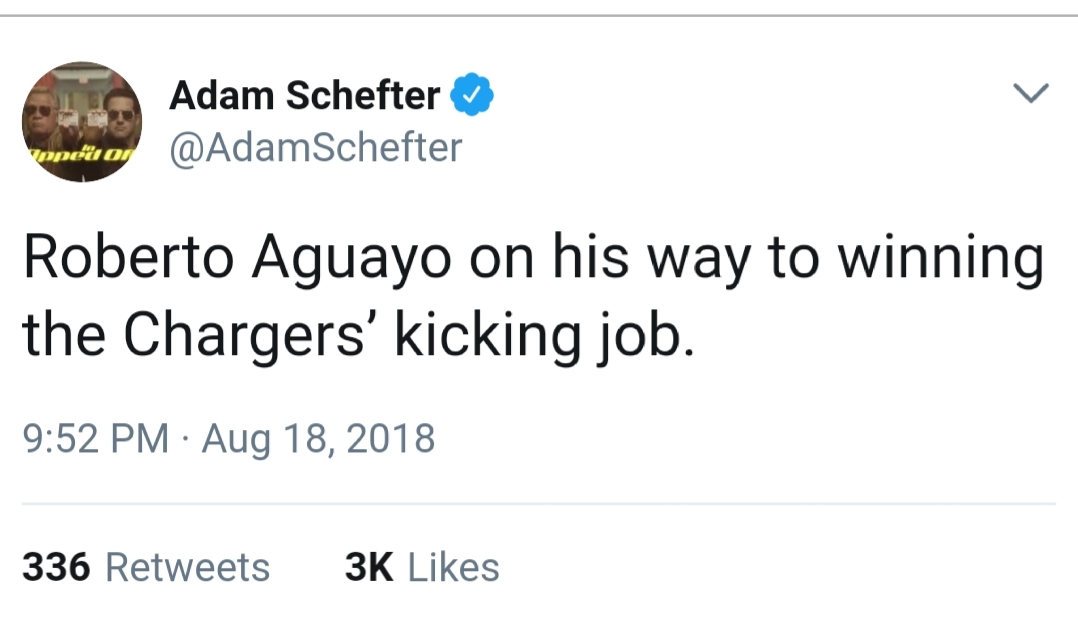 Now we know how the Chargers are going to manage to lose 5 games they should have won this season.

Well I guess the first notification wasn't a fluke:

Bear in mind I don't get a ton of NFL notifications from this app, just a couple here and there.

And speaking of this, $wag came into the game as QB2. Lynch was QB3. Seems he has officially made the jump up the depth chart, and Lynch's 45% completion rate with the third team probably cemented it further (Kelly went 7-of-9 with the twos).

We are officially just one Case Keenum injury away from $wagball.

Now we know how the Chargers are going to manage to lose 5 games they should have won this season.

Pretty much the same way they did last season.

Though it would be a laugh if Aguayo suddenly started kicking well. Tampa gave up too soon!

Hey, I, for one, hope Aguayo does well. Selling car insurance in the job he starts probably next year.

Playing behind a shuffled offensive line, Kirk Cousins struggled in his home debut in a Minnesota Vikings jersey. Consistently harassed by the Jags' front, Cousins went 3-of-8 passing for 12 yards on four drives (one drive lasted just one play, ending on a Latavius Murray fumble). Cousins was off-target on several of his tosses, missing high, wide and in the dirt. We won't take too much from Cousins' problems Saturday afternoon. The bigger issue is in front of the Vikings' passer. Injuries have forced the Vikes to employ a makeshift O-line at this point. It's worth noting that Minnesota went through similar shuffling last offseason before settling on its starters. For a team that is solid in every other phase, however, the offensive line could become a harbinger of headaches if Mike Zimmer's staff doesn't get improved play in front of Cousins.

This is the fear for Minny. Cousins is especially terrible with pressure in his face, so Minny's OL has got to be perfect for the offense to click. He's the opposite of what they had in Case Keenum last year.

It could be a very, very long year in Minny.

Elysium is at the Vikings/Jaguars preseason game right now, and he's been trolling me on Twitter with it: 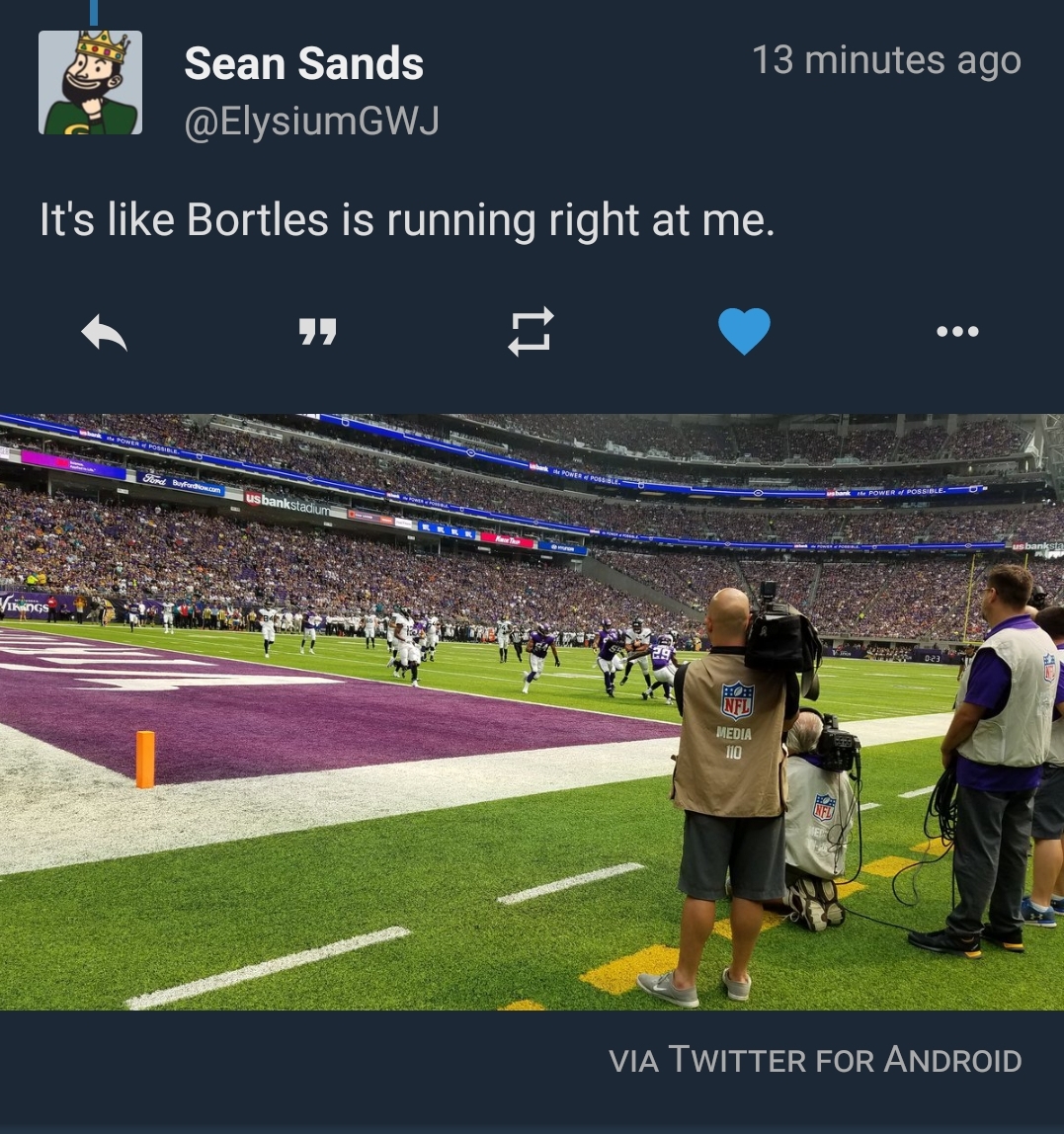 Well, yeah. It's not like Bortles would be throwing right to him.

So, did Elysium shoot him? That’s how it works, right?

So, did Elysium shoot him? That’s how it works, right?

And then stuff him and put his head on the mantle?

The Jets have reportedly contacted the Jags about the possibility of acquiring Dante Fowler.

Yes, Jets. Let's do this. Fowler for Bridgewater, straight up. Lock it in.

538 has an article about the Browns and how they've been, well, bad. Historically bad.

Since returning to existence in 1999, Cleveland has enjoyed the most valuable collection of draft picks in the NFL, according to the Approximate Value we’d expect players selected in those slots to generate early in their careers.6 Yet the Browns have also been — by far — the worst drafting team in the league, in terms of the AV its picks have actually produced relative to those expectations.

Yeesh, but there's even more at the link, like:

And they never learn, so here we are, again.

Travis Kelce serenades his girlfriend, and she shares it on Instagram.

and the seventh-lowest percentage of capital in the most reliable positions — offensive linemen, linebackers and defensive backs.

What's worse is when you look at how relatively well they've done when they have drafted offensive linemen.

The New Browns have spent 7 picks in the first 2 rounds on offensive linemen. This is what that list looks like:

Jeff Faine (2003, 1st round): Solid starting C for multiple teams for nearly a decade
Joe Thomas (2007, 1st round): 2023 1st ballot Hall of Famer
Alex Mack (2009, 1st round): 5-time Pro Bowler (and counting) in 9 years, arguably still best center in the game
Mitchell Schwartz (2012, 2nd round): Rock solid good (not great) right tackle that doesn't miss a snap
Joel Bitonio (2014, 2nd round): Top 10 guard, only slowed by injuries, should make Pro Bowls
Cameron Erving (2015, 1st round): The lone true stinker of the group, though the Browns dumped him after only two years, and the Chiefs seem to think he's at least a valuable swing sub
Austin Corbett (2018, 2nd round): Just drafted so we'll see, but they've installed him as starting LG and moved Bitonio out to LT to fill Thomas's void, at least for now

3 of those 7 were home run picks, Schwartz and Faine were both solid doubles (who continued to be starters in the league after the Browns failed to keep them beyond their rookie contact, because Browns), one is a brand new pick that's already atop the depth chart, leaving only Erving as the lone clear bad selection.

CBS ranks teams on how badly they should trade for Teddy

CBS ranks teams on how badly they should trade for Teddy

Another sportswriter oblivious about the salary cap.

Rams can't fit $6 million under the cap. Jags can.

Rams are dead last in cap space ($1.1 mil) and would need to free up about $5 million just to fit Teddy. So unless they're gonna cut Mark Barron or Rodger Safford or something to do it, it won't be the Rams.

Jags have the 8th most cap space with $18 million and change. They can take Teddy's deal without blinking.

As for the other teams in the top 10 of the list, most of them could fit Teddy without too much trouble, with Tennessee and Houston in particular each sitting on over $30 mil of space, but the Giants are the next-to-last team in cap space, with just $1.4 mil.

If the Bucs did it I would be so happy. Doubt they would go against this idiot fanbase though.

Teddy to Houston would make me happy...

If the Bucs did it I would be so happy. Doubt they would go against this idiot fanbase though.

Man he is going to kill somebody soon...

I couldn't have come up with his name for $1 mil.

He should probably coach the Dolphins instead.

Yup and they haven't had a draft pick spent on their QB depth chart in what seems like forever.

I went and looked... they spent a 7th in 2013 on Sean Renfree. Before that, the last QB they drafted was Ryan himself.

Yup and they haven't had a draft pick spent on their QB depth chart in what seems like forever.

I went and looked... they spent a 7th in 2013 on Sean Renfree. Before that, the last QB they drafted was Ryan himself.

Kurt Benkert isn't a terrible project for them to have, but he's hardly going to be the #2 for them for a while.

I couldn't have come up with his name for $1 mil.

He should probably coach the Dolphins instead.

I'd take him over Hugh right now.

I'd take him over Hugh right now.

I'm going to choose to believe your misspelling of his name was intentional, either by you or perhaps an auto-correcting keyboard that's tired of his sh*t too.

The embedded video of his interview about this was a fun watch.

Tyreek Hill on the Bills? Only in the Chiefs’ team-wide Madden League

Tyreek Hill might be a speedy wide receiver on the field, but off of it, he’s something closer to Roger Goodell — at least when it comes to the Chiefs’ newly formed, team-wide Madden league.

Just call him The Commish.

Everyone on the Chiefs controls their own franchise in the video game, including Hill, who plays as the Bills.

So who gets to be the Chiefs?

“So believe this or not, Pat is the Chiefs,” Hill said of quarterback Patrick Mahomes. “I’m the Bills. I’m trying to get myself from the Chiefs to the Bills. But he won’t trade me. I’m trying to give Pat Kelvin Benjamin and a first-rounder. I don’t know. Tonight, man. He better take my trade.”

And Baker Mayfield may have just gotten a promotion.

The good ole 5-0 football game. Looks like I missed a good one.