So unfortunately it will not let me turn it in, I need to know either the name of the card, or at least the expansion it was from (I could work backwards from there).

Nevermind, sorry, found a way to redeem it.

Alas it seems we will never know, after struggling with the authentication codes for a moment or two, and trying to find the right place to input the code on the website, after getting everything else right it seems the code is no longer valid. I triple checked after it said "code is no longer valid" to make sure I copied it right, and it was. Apparently those cards did have an expiration date as to how long they were valid for. Who knew.

Dammit, sorry. Yeah, the card is OLD but it's a real shame they aren't still valid. Screw you, Blizzard! Lol

It might be worth contacting Blizzard about it. If there is no visible expiration date, I don't think it costs them much to make a happy customer. It should be an easy win or a simple "no I'm sorry, that card is expired."

Well for the code input section, it has like a 20 character limit on the account code redeemer thing, whereas this code is around 25-30, so it's been long enough that the form of the code itself has changed, as far as I can tell. I've given up on it and after a few failed attempts, I don't want to risk getting banned, so if someone else wants to try go right ahead, I'm just giving up on it.

I'll talk to Blizzard. Might as well see what's up. There's nothing on the code about an expiration, but the card is from 2008.

And when I put the code from the card in it did spit out another code to give to the in-game vendor. *shrug* Maybe I i out the wrong thing and it's a bunk code.

It might be if you had input the code from the card on the redemption page before giving out the the code you gave me to use in game, it was associated with your account it had to be used by you.

I wasn't logged into anything when I went to the redemption page, so I don't think that's it.

Hmm ok. I don’t know then. I just had a few failures when I tried to redeem it, and I’m worried about getting a temporary ban so I’m just gonna leave it as is.

Got my 300 mounts achievement! 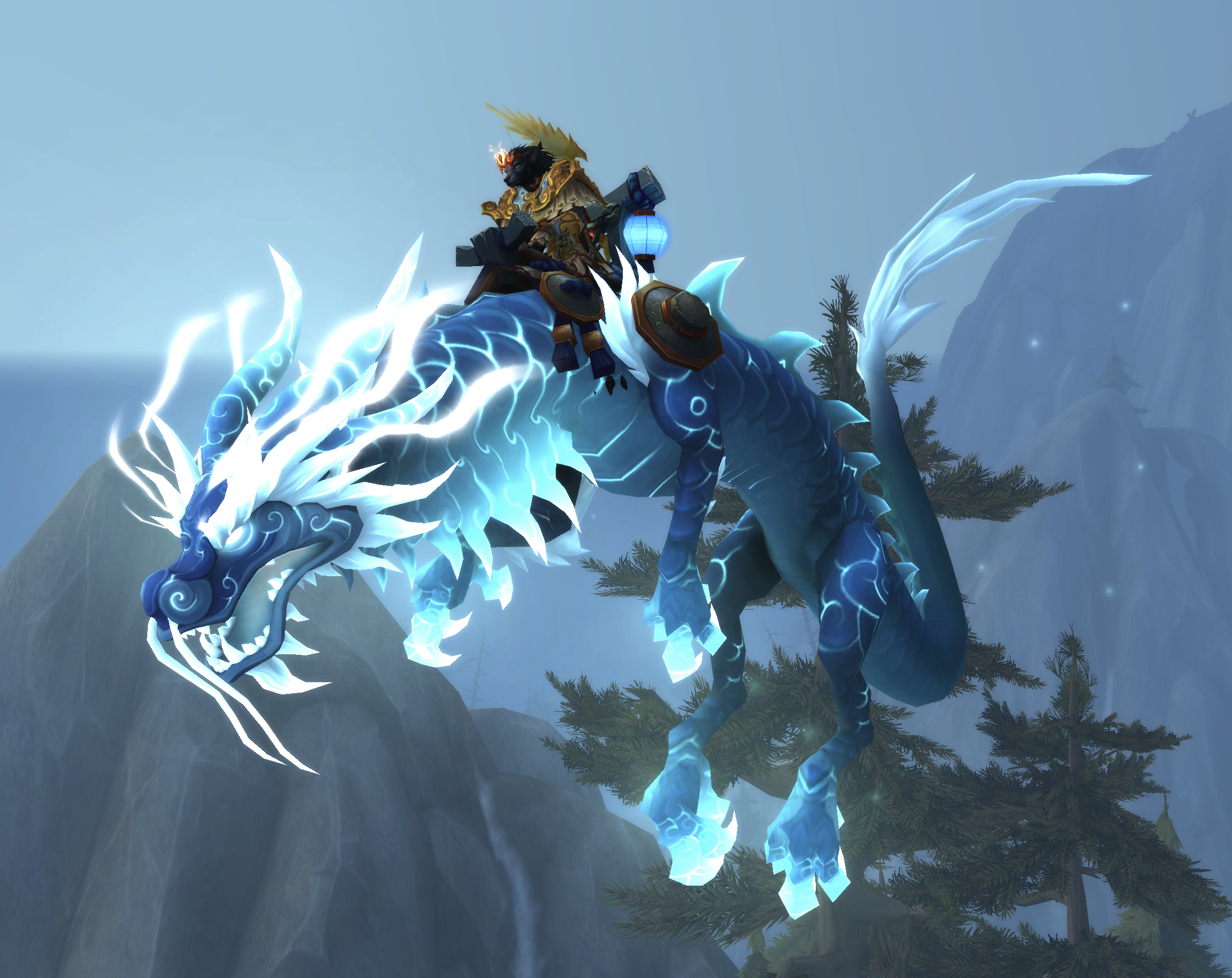 Got my 300 mounts achievement!

Now up to 3.4M+ gold on my Ally Blackhand group o' toons.

I figure if I murder every leather-giving animal on both BfA continents 20 times over and convert said leather into vendor trash, I might make the magic 5M and buy the long boi before SL comes out.

Anyone have any decent gold-making ideas that aren't (a) raids (which are my go-to just for variety's sake) or all over YouTube? Nothing mind-numbing. I might just finally bear down and devote myself to the Insane title instead.

Damn, Enix, that is impressive. I have like 850k and feel rich.

You guys are better people than I saving up that much. I had a friend that just bought the 5M gold mount and I just don't understand. A WoW token currently costs 120k gold (roughly).

I really like this streamer. Unfortunately her tactics appear to be all raids. Man though, at 8 hours a day, you are looking at over 10 weeks to earn 5 million gold.

Damn, Enix, that is impressive. I have like 850k and feel rich.

Thanks. But I'm cheap AF (it's killing me that my new DH is unguilded and I have to cover my own repair costs) and play constantly but at a very high social-casual level. Still gotta get my raid participation achieves before SL drops!

@ FangBB: Thanks for the video. I've seen some other folks suggest that the Draenor raids and 5s are where the gold is, so I guess I need to check them out.

I can't see myself running back-to-back N-H-M of anything, tho. I'm the guy who gave up on Invincible and Mimiron's Head after 3-4 runs. Yes, I grind out the same WQs over and over but get bored by instances that I have to repeat. Weird, I know.

The best gold making rate on that video was around 10k/hour. You can buy a WOW token for $15, which sells for 120-150k. So taking an extra minimum wage job and spending your pay on tokens will get you at least 10 times as much gold per hour as you could make by spending the same amount of time grinding away in the game.

Kraken Latte did and actual guide on earning 5 million gold:

Came back to the game after a reasonable absence. Loving the game but MAN O MAN Nazjatar can suck it. I am on BFA Flying Pt 2 but probably will never get it because of that zone. Mechagon is so much better.

Came back to the game after a reasonable absence. Loving the game but MAN O MAN Nazjatar can suck it. I am on BFA Flying Pt 2 but probably will never get it because of that zone. Mechagon is so much better.

Nazj on the ground was brutal. I managed to aggro most everything I rode past. Worse, half the mobs are no-joke elites.

Hunter + Disengage has saved me from dying a time or two

Hunter + Disengage has saved me from dying a time or two

I did it on my mage, with slow fall + invisibility, and teleporting as the factors that made things easier

So my friend and I have returned and decided to level up together. He’s loving shadow priest so I need to figure out what to play. Here are my thoughts:

So my friend and I have returned and decided to level up together. He’s loving shadow priest so I need to figure out what to play. Here are my thoughts:

IMO if you plan to just level in open world then go with whatever sounds fun. It won't matter to a huge degree. If you plan on dungeon runs or eventually raiding then having one spec that can tank or heal will get spots in groups a lot faster than dps.

I have found there is way too much pressure put on tanks and healers for raiding even if you know the dungeon well. If you don't, it is far easier to queue as DPS despite the longer wait times. It is so much easier to follow the leader, burn things down and not stand in the bad spots.

For leveling it really doesn't matter especially if they are going to be a priest, shadow or not. You could even be a shadow priest too, though I would recommend waiting for the pre-patch since the broken bits of shadow priests are largely fixed. (I am not in the beta but I have seen many videos of the changes and they are much nicer)

These are the specs I am enjoying now:
-Protection and Retribution Paladin, Guardian and Balance Druid, Arcane Mage, Survival and Beastmaster Hunter, Assassination Rogue, Demonology and Affliction Warlock, Restoration Shaman and the best is Havoc Demon Hunter

-Druid might be the best choice since you can be a tank, off tank, healer, ranged dps and melee dps. My favorites are off tank because you can offset slow killing speed my killing 3-4 at a time. Ranged dps has a lot of aoe potential and would work well with a shadow priest.
-Arcane Mage because I struggled with mages for a long time since the BFA pre-patch. But I finally found a flow with arcane. I wanted to like frost with the pet elemental but it is largely useless and the frost cast times frustrate me.
-Survival Hunter is not the most popular but I LOVE it. There is a lot of aoe (see a pattern here). The crow skill is cool and you get it the earliest. You could also take Beastmaster and run around with 2 pets at level 15 (first tier talent)
-Restoration shaman. The rotation is simple and satisfying and the other specs are too flimsy. Elemental is almost as fun but you trade off sturdiness for for skills that go boom. Enhancement is supposedly much more fun in Shadowlands but is too flimsy to play in BFA
-Assassination Rogue is not the most popular spec but it is my favorite
-Havoc Demon Hunter is my favorite of all my characters full stop. It was my first to 120, my highest gear score @435 (with no raiding or corrupted visions that everyone talks about but I have no clue of) Wait for the pre-patch because you will be able to play lowbie Demon Hunters and Death Knights. It is one of the first classes I will play when the pre-patch launches and I will probably roll many DH alts (hopefully other elves, void and nightborne, will be able to roll one at some point)
-Fury warrior is the only spec I have fun with. All other tanks specs I have way more fun with than protection despite it having some neat mechanics. I think the other tank specs can mitigate slow killing speed with aoe that the warrior does not. Fury has some neat abilities but it fairly flimsy despite having the decent self heal.
-Demonology or Affliction Warlock are fun and get better as you level. Something happened to Warlocks as I was having a blast with them BFA pre-patch but they lack the oomph they once had now. Destruction was confusing but fun then but is just confusing now. Who thought it was a great idea to have fractional soul shards? Can you imagine a rogue having to generate 10-15 combo points for the same damage? And in the case of Demonology, it is like rogue's damage from combo points having a 1 second wind up or finishers having a 20 second cooldown. (there is a high level talent where you generate imps passively that helps) To Afflictions credit, it is the same dot stacking but at least it seems less repetitive than pre-patch BFA.