Sponsored By: Pill Bug Interactive, via the Curator Connect Program

Sometimes being derivative is ok.

One of the things I’ve tried to stave off since I started writing these “reviews” is what I like to think of as Critic Syndrome. In general, I’ve noticed that the longer someone engages in the business of having professional opinions about something, the less they seem to enjoy that thing.

Some of the problem might be monotony. I mean, if you’re working the Fighting Game beat at a gaming website, there’s only so much you can talk about fireballs before you wish someone would kick your own face around to the other side of your head just so you could see what other people are playing. Games within a genre are often so samey, and they’re almost always trying to copy something that did it better several years ago.

For my part, I’ve largely avoided becoming a colossal cynic by not specializing. I’m fortunate enough to be tasked with playing and writing about pretty much anything I want, and I have the added blessing of being showered by you fellow GWJ members out there with presents of games I never would have thought of buying. So, thanks for that!

Sometimes, though, you can’t help but play something that’s a bit derivative. Like when your curator feed attracts the attention of a developer who saw that you gave high marks to a game very much like the game they just made and sends you a free copy to review. Oh, sure, they say you’re not obligated, but why refuse? Someone cared enough to make a thing, and they think I’m influential enough to help them sell it. Why not help out?

So it was with Cycle 28, a game that is heavily influenced by Luftrausers, but different enough that it can’t be accused of outright plagiarism. It’s an arcade space shooter with Asteroid-like controls and an interesting take on the upgrade system. 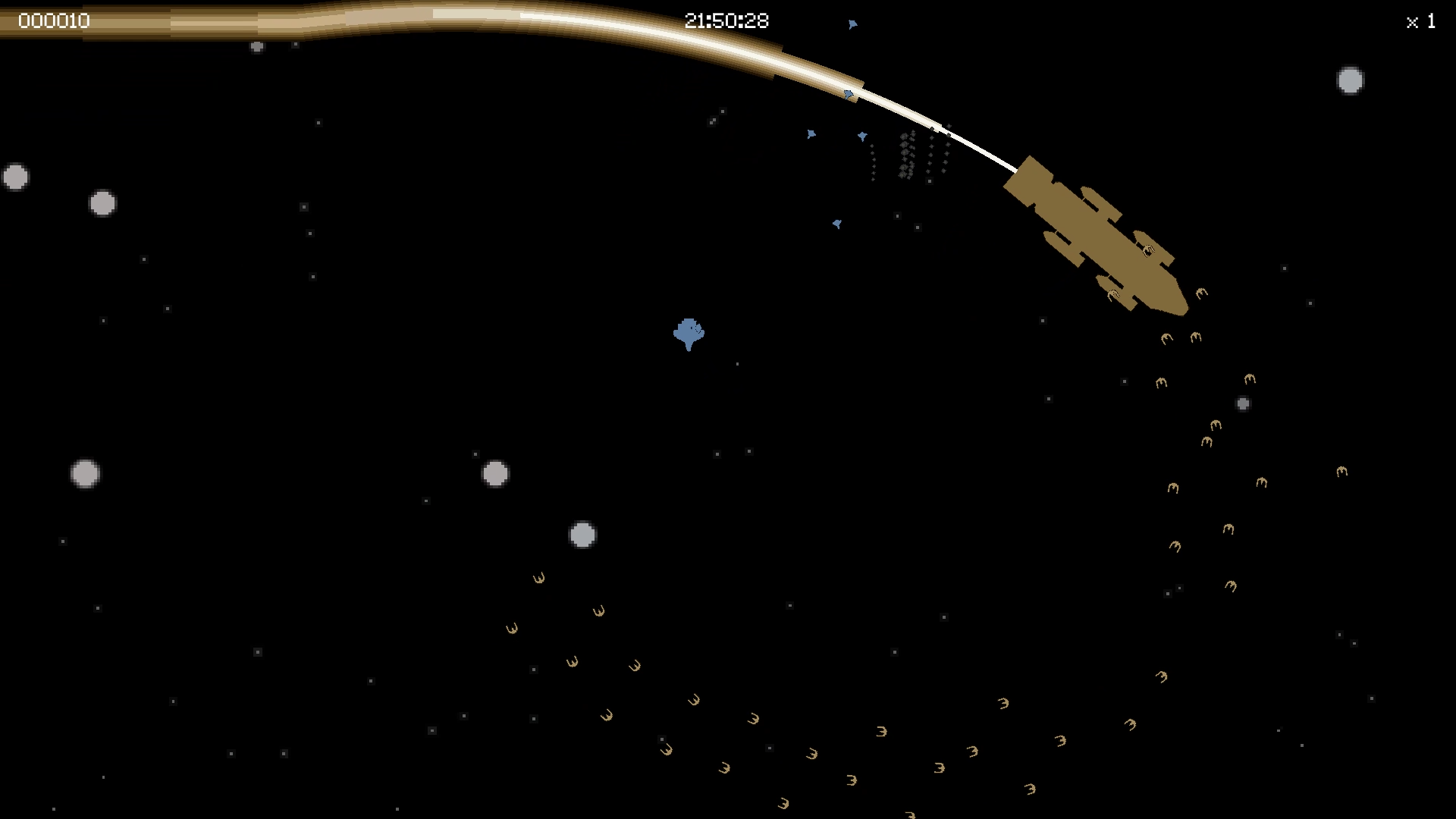 The upgrade system is what caught my interest. You’re given an upgrade every time you beat your own high score. It’s a nifty way of gating some items that are, quite frankly, game changing, but it does feel like it screws over players who have one of those elusive Golden Runs.

You know what I’m talking about. You only have five minutes before you need to go do something, so you decide to play one more round, and somehow you end up playing for twenty minutes on the best run of your life. You’re afraid to quit because you’ve never been on such a roll, but if you don’t quit you’ll be late for work. And somehow you’re still playing.

It’s worse in Cycle 28, because you don’t just end up being late for work; you make future upgrades harder to get. You know you’ll never play that well again, but you have to, because that’s how you get the next upgrade.

Sure, you could game the system and suicide every time you earn a new upgrade, but somehow that feels like cheating. Also, how can you turn your back on the perfect run? You’d have to be some kind of monster to do that. 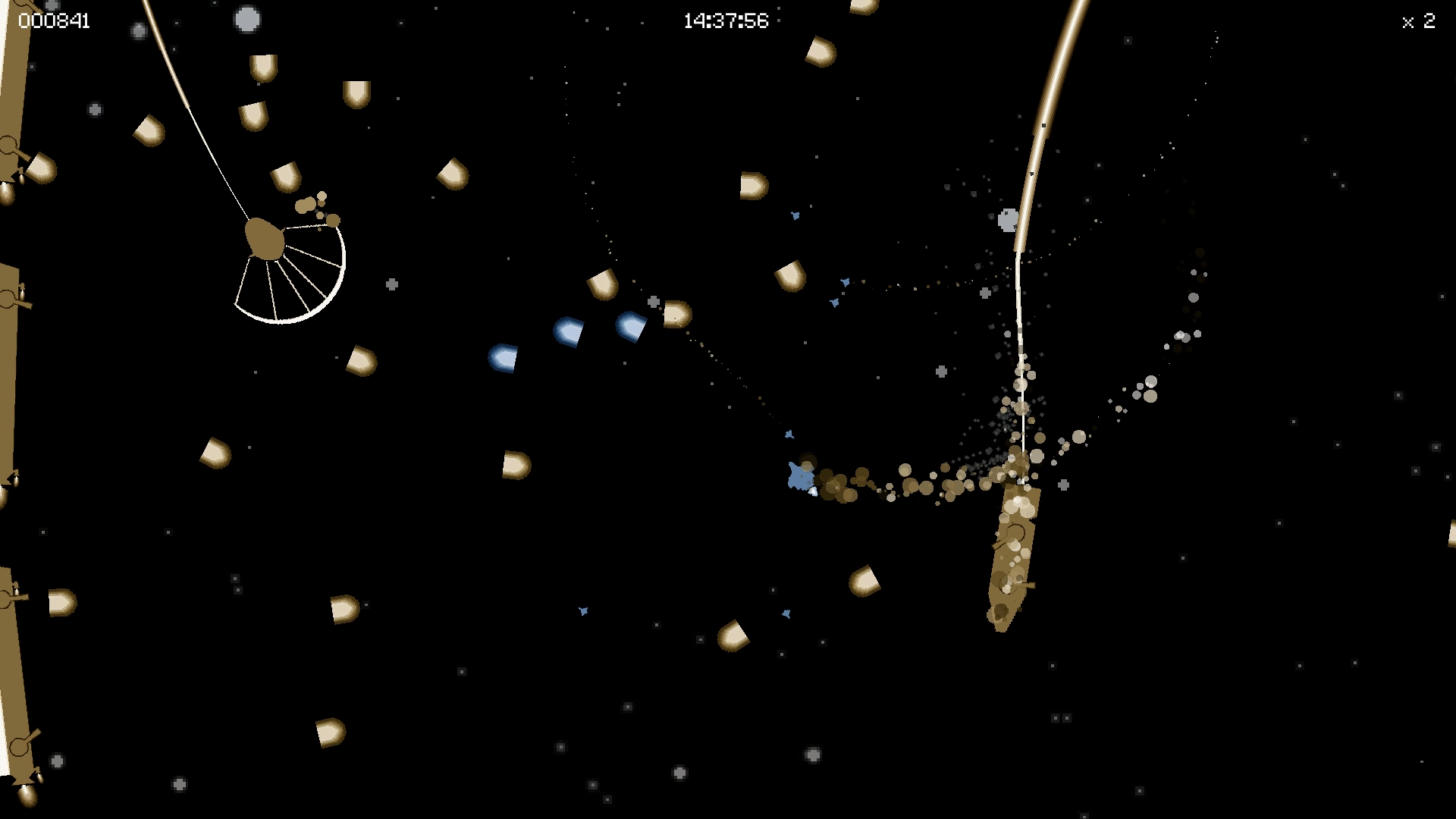 The way Cycle 28 gets around this is by making the upgrades matter. The first one you get triples your firepower, so you’re in good shape to beat that high score, but you still need to work at it. On balance, it’s a pretty darn good balance of challenge and reward, dangling that carrot just out of your immediate reach but never truly making it impossible to get. It’s a hard line to walk and, in the first hour at least, Cycle 28 walks it well.

I mentioned that the game was heavily influenced by Luftrausers, and it is. The controls are very similar: one button to activate your thrusters, which increases your turning radius, and another button to shoot, which can arrest your forward momentum. If you take damage, just stop shooting until your ship stops smoking and you’re good to fight on.

Since you’re in space, there’s no ocean to crash into or cloud ceiling to stay below, so the game has to think of another way to keep you from just flying in one direction until your thumbs get tired. Cycle 28 does it with a clock. You have a limited amount of time to rack up as high a score as you can, so the more time you spend flying around aimlessly, the less time you have to chase that score. 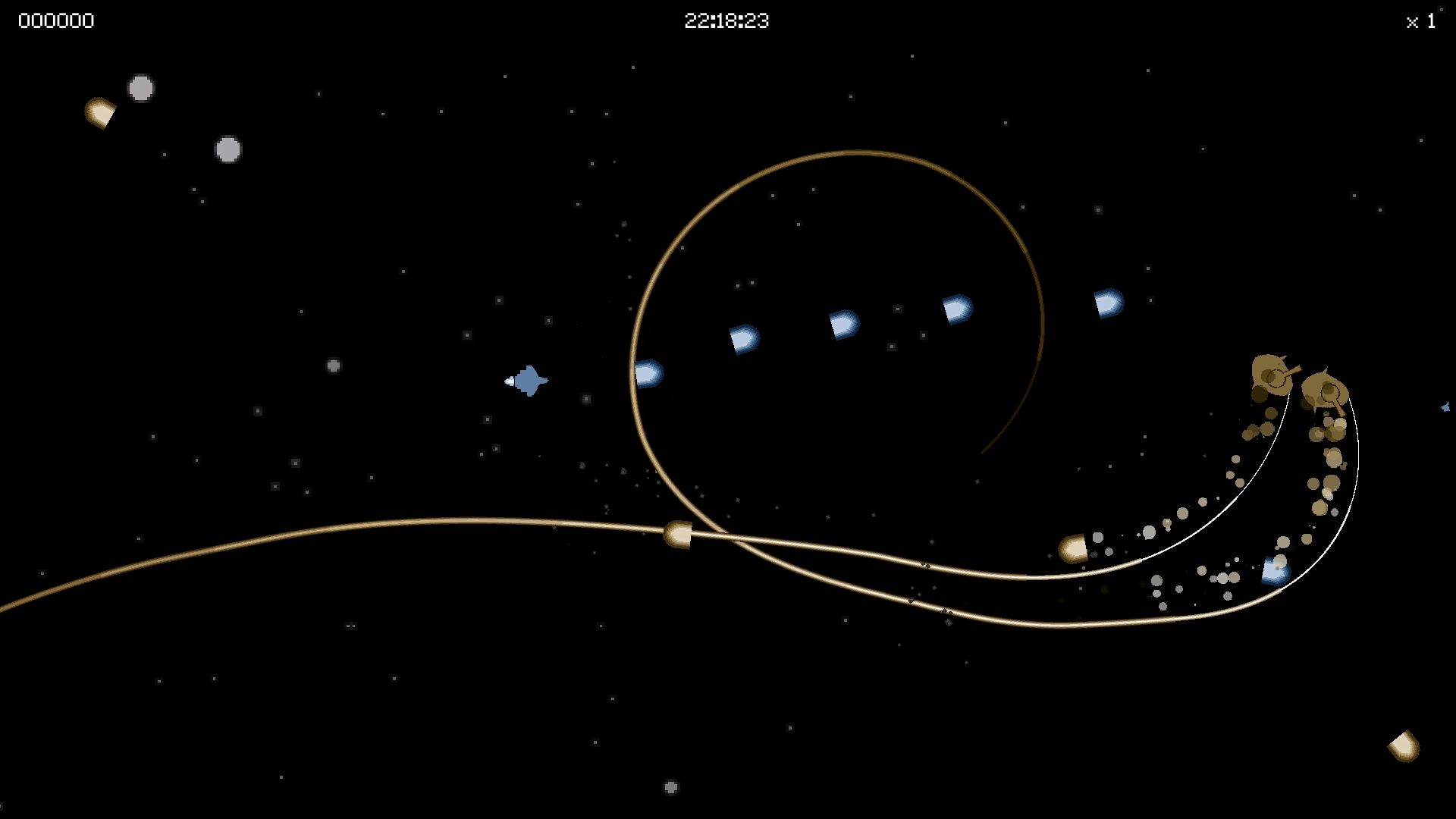 Not that I’ve ever hit the time limit because, like Luftrausers, Cycle 28 is fiendishly difficult. Some of the enemy ships you run up against can deploy hundreds of tiny, hard-to-hit ships that swarm you and sap your health. The game leverages a minimalist graphic style to throw as many enemies and projectiles at you as it can, so the question of “what happens when you run out of time” never comes up.

The thing about derivative games is that they’re usually mediocre at best, but Cycle 28 manages to be an excellent example of a Luftrausers clone. The controls are just as tight and responsive as you’d expect a game inspired by Luftrausers to be, and the soundtrack, while not quite as bangin’ as Luftrausers, is good in its own right. To be honest, I never loved the ocean and cloud ceiling limitations anyway, so in that respect Cycle 28 gets a leg up on its predecessor.

On the whole, if you liked Luftrausers, you should probably consider Cycle 28. It’s got everything you could want from Luftrausers, minus some of the more unfortunate implications of the art design.

I put seven hours into Luftrausers before I hit the wall and gave up. I’m not sure if I’ll play Cycle 28 more or less than that, but I’ll definitely be playing more than I already have played, and for a game that is repetitive by design, I’d say that’s pretty high praise.

Is it the Dark Souls of Luftrausers clones?

I’d say that Luftrausers still holds the title of being the Dark Souls of Luft-likes. The added constraints on your movement combined with some achievements that were, quite frankly, unreasonable add up to the sort of self-punishing experience that appeals to the sorts of people who use this section of the review to make buying decisions.

No, Cycle 28 is not the Dark Souls of Luft-Likes, but it is quite difficult and I can’t help but recommend it to anyone who’s looking for a healthy, arcade-style challenge.