So I took one look at this game and immediately said "No." I didn't like the art style. I like detailed sprite artwork and I detest large blobs of monotone color. The gameplay seemed fine. It's a platformer and I have played those before so missing out wasn't a problem. The difficulty is fine for me on normal so far, but there are various assists that can be used if they are wanted or needed. No lives, if you fail you are immediately put back at the safe zone and you can try again.

Then I watched the Game Grumps Let's Play and discovered the plot.

The game's protagonist is Madeline. She is a determined (or stubborn?) plucky? redhead dealing with anxiety and just wanting to know she has the capacity to do and overcome and for this reason she is going to climb to the top of the titular mountain, Celeste. It is a strange mountain. Such a plot is catnip to my psyche! No way but up, my friends!

It's very good. You learn all the character's mechanics right from the start and each screen is the challenge. You figure out the right path and then execute. With instant reset on death, experimentation is the order of the day. Each level has quirks which it quickly teaches. There are bonuses and harder extra levels one can unlock. The characters are quirky, but it all feels solid. You can even skip cutscenes or, after talking to someone, you can go back and enter conversation again to hear more until everything is said.

One of my favorites this year! I don't usually get into tough platformers, but Celeste kept me engaged all the way thought.

Yeah, I started this the other night on PS4 and immediately took to it. Only cleared chapter 1 and done a little bit of 2, but I am really enjoying it so far.

Straight up this game is great. I've got all the strawberries, all the blue crystal hearts and am working on the red ones so far.

I especially love the characters. The dialogue is great. Theo and Madeline seem very human. Usually I skip dialogue in games but this was one of the few instances where it was great to read.

That saidy the story and the gameplay seem rather incongruous. The story wants to tackle some mental health issues and I'm not clear that 'precision platformer' really fits and the solution for Madeline's problems the game gives us somewhat trivialises the mental health issues we're told she has. 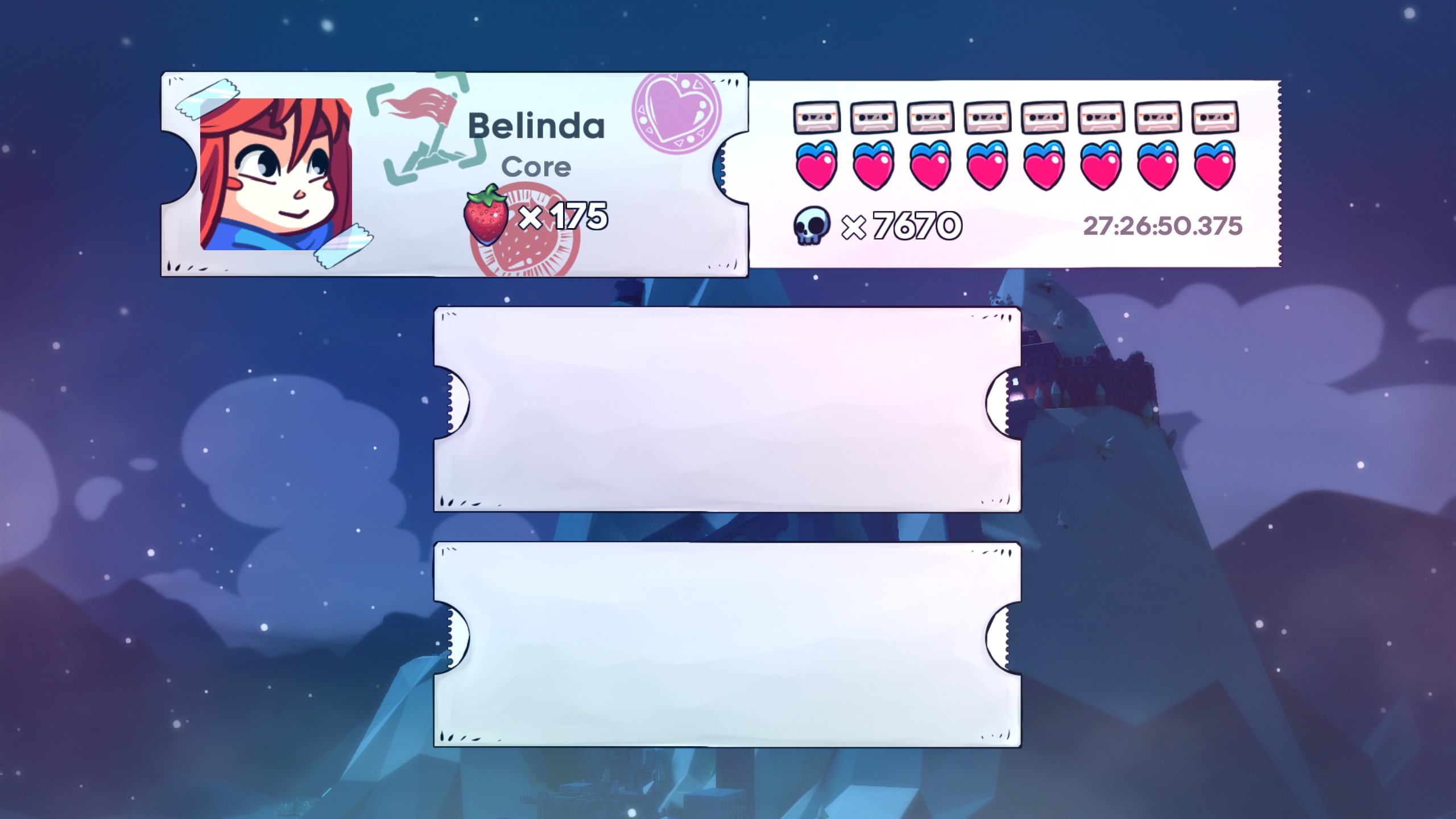 I really like the story and the music fit it perfectly.

I've just started on the C-Sides and while they are phenomenally hard, I really appreciate that there is only 3 "screens" per C-Side level. I've managed to finish the 2 c-sides, but the 3rd level's last screen is stupidly difficult... I'll get it one day

Blimey! I didn't even know there was C-Sides! That's some achievement Erebus, well done!

Love the game, but I’m playing it in short sessions so I’m only on chapter 4. Chapter 3 was great. Unfortunately, I seem to grip the controller pretty tight or something and it becomes uncomfortable to play after too long.

It's showing them as found in all levels... Are there secret strawberries?!?!

It's showing them as found in all levels... Are there secret strawberries?!?!

There are 25 gold strawberries. I happened to see a guide to getting the 200th one but I haven't found out anything about 176-199.

There's three golden strawberries in each chapter. One for the A, B, and C sides. You get them by, uh, beating the entire chapter without dying. Good luck!

There's three golden strawberries in each chapter. One for the A, B, and C sides. You get them by, uh, beating the entire chapter without dying. Good luck!

I just found them this morning! They show up at the start of the chapter, rather than being hidden.

If you have a gold strawberry and die, it warps you back to the chapter start.

Doubt I'll ever collect all of these, I'm just not that good at it.

Ok, I got the 1st golden strawberry on the 1st chapter A-Side... not difficult, but I cannot see me being able to do it on the B & C sides...

Well I just finished all of the B sides tonight. I'm going to take a few days off and then come back for the C sides later. 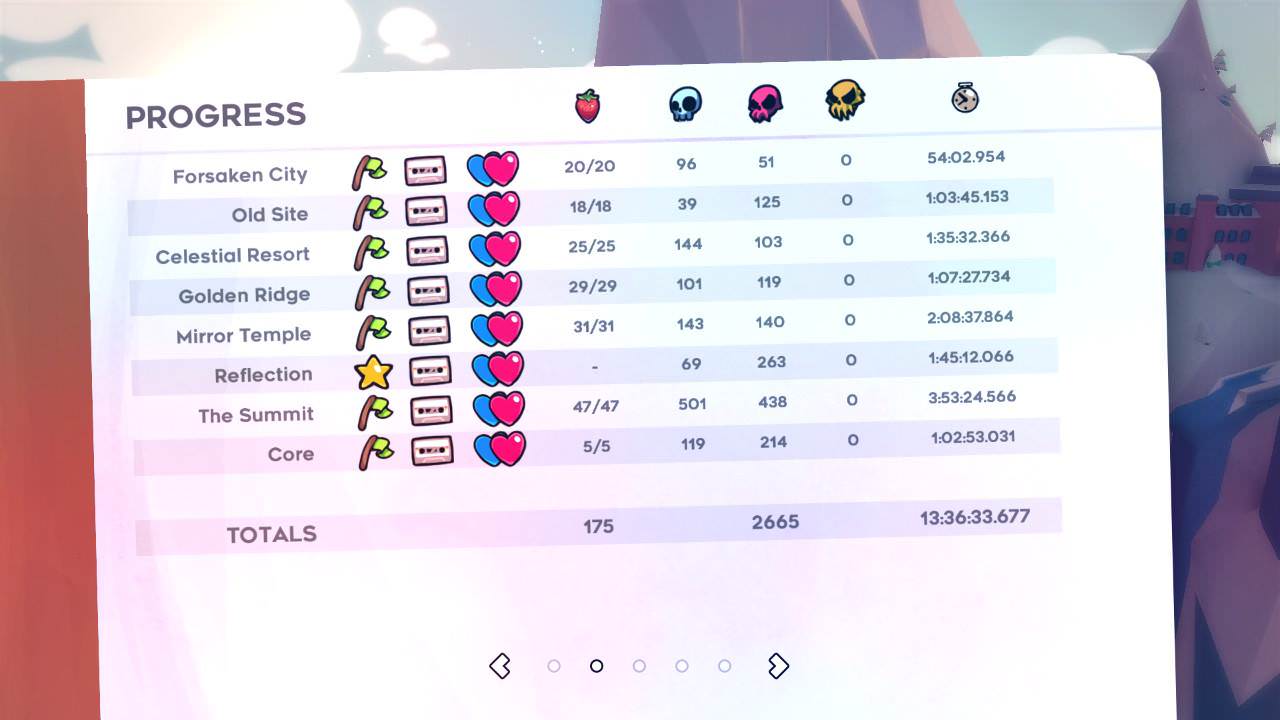 Well I just finished all of the B sides tonight. I'm going to take a few days off and then come back for the C sides later.

Finally got back to playing this. Only have the Core B-Side to finish up before the C-Sides. I think The Summit B-Side could possibly be shorter, I'm super glad I completed it but it did seem punishingly long.

Quite impressed that you have about half the deaths I have!

I'd say I really love this game but I think Super Meat Boy just beats it out in the precision platformer stakes for me. I suspect I'll go back and replay some SMB to check if that is the case.

re:golden strawberries I can see picking up some of the A-sides and the "no-dash chapter 1" challenge but I can't imagine I have the patience (or skill) for the B and C sides.

Sigh, the C-sides are finally done. They started off fairly easy (relative to the B-side chapters), but once you reach the Mirror Temple the gloves come off. And they're replaced with brass knuckles. That final section in the Mirror Temple is just maddening.

I'm sad to say goodbye to Celeste. I honestly can't remember the last time that I had this much fun with a game. I could go for the golden strawberries, but that's way beyond my skill level. I think I could manage to get them for the A-sides, but the grind that would take just doesn't sound fun. Oh well, all good things and all that ... 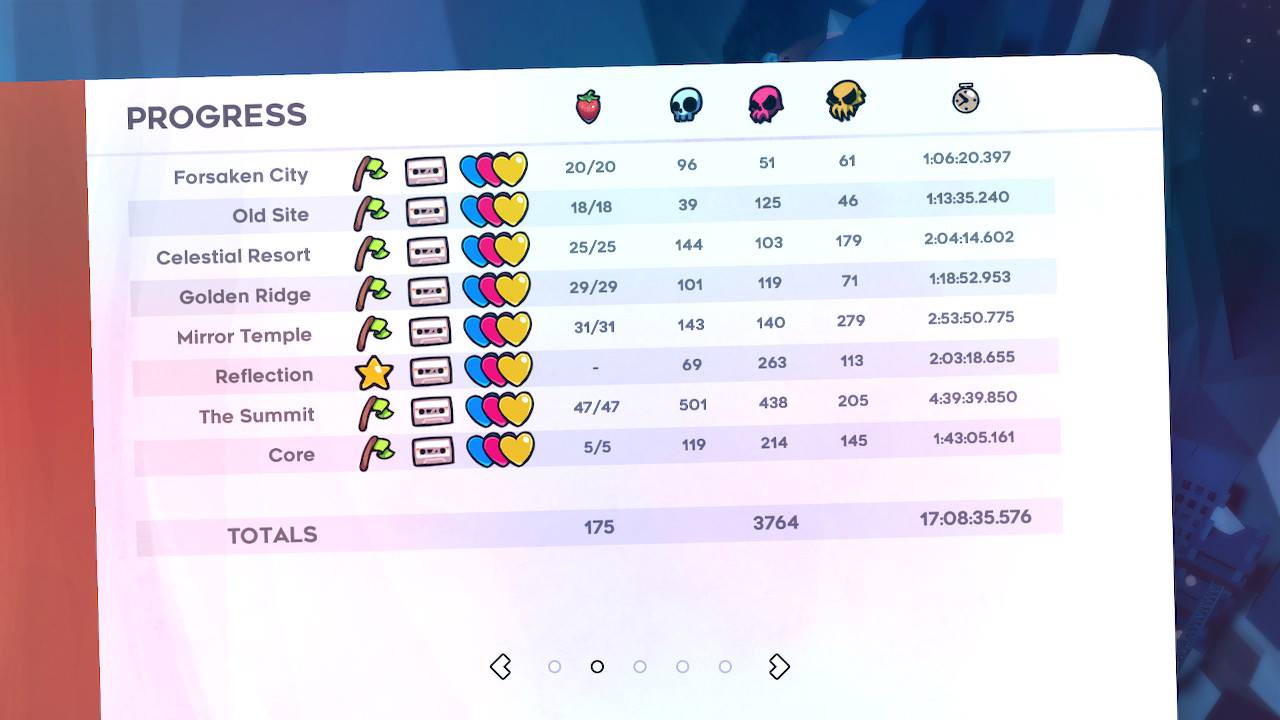 Well, I made it to summit finally.

That was tough for me, I won’t pretend otherwise.

Maybe I’ll attempt The Core and some B-Sides (I did find, I think, 3 of them) at some point.

It felt like a real accomplishment just seeing the credits, however. I don’t know if I would have stuck with it if it wasn’t for the theme.

I did really enjoy it and the feeling of accomplishment getting through the toughest sections.

I’m on my way to the summit. I loved the game up until the boss fight after the big fall. The precision needed basically every screen from then on has been grueling. I feel like at this point the game wants me to hate it — wants me to say good riddance once I reach the top. Which is sad for how much I loved it early on. I’m on flag 14 or something near the summit. And I really feel like I just want to be done. I’ve been close to YouTubing the ending so many times. Just can’t seem to get the thumb sticks to decide between up, right, and up-right.

I would call the Core well worth the effort, but I totally get folks who finished with however many strawberries and just said f*ck it after the end... especially after the "boss" battle with the lady. That was definitely a very obnoxious bit of the game. XD

Huh, I really liked that boss battle. However after finishing I haven't gone back to poke at any B sides, etc. I mean to sometime, but there are so many other games to play.

Loved the boss battle, makes you use every skill & wrinkle you've learned throughout the game up until that point. I thought it was masterfully crafted. Tough but very rewarding.

I enjoyed the boss fight, but it went on a bit too long.

Some Celeste DLC Chapter details:
-It won't be ready for the anniversary on Jan 25th, sorry!
-It's all one continuous chapter, no B-Side
-It's after the current hardest levels in difficulty
-No strawberries
-There are some new items/mechanics
-Free on all platforms

LastSurprise
Posted: July 30, 10:54 AM
Thou hast acquired a new tag

I am late to the party on this, but I've been playing Celeste on and off over the past month, when I need a twitchy break from my RPGs, and I am absolutely loving it. The platforming is tight, the exploration is rewarding, level designs are well thought out, and the story is beautiful. This is a real contender for my GOTY. Anyone else still playing?

I'm just waiting for the DLC.

Yeah I kind of stopped in the middle of the c-sides. Figured I'd go back and finish up eveything when the dlc comes out.

I’m on my way to the summit. I loved the game up until the boss fight after the big fall. The precision needed basically every screen from then on has been grueling.

I just finished this last night. I was surprised by how long the boss fight lasted, and I kept thinking, “surely, this is the last screen.” But I think the length of the boss fight and the precision demanded fit the theme really well — by highlighting the significance of Madeline’s struggle, and how hard she had to work to overcome that part of herself. It also made it really impactful, to me, when I finally wore out the boss.

That said the story and the gameplay seem rather incongruous. The story wants to tackle some mental health issues and I'm not clear that 'precision platformer' really fits and the solution for Madeline's problems the game gives us somewhat trivialises the mental health issues we're told she has.

I’m not totally done, so I can’t comment on the game’s solution. But what I’ve seen so far doesn’t seem like it trivializes.

I.e, Madeline coming to terms with the fact that her depression is not something she can run from, ignore, or self-medicate away — and that the way forward involves accepting herself, loving every part of herself, and acknowledging that a lot of the negative feelings and self-sabotage comes from fear.

I don’t know if the game ever suggests she doesn’t need therapy, or medication, or further support after she gets down the mountain. If it does, I would agree with you. But coming to terms with her issues is a pretty big deal, by itself.

Also, for me, I’ve found that the precision platformer gameplay really syncs up well with the game’s overall theme. I think it’s meant to be symbolic: the dangers on each screen are, largely, the product of Madeline’s fear and anxiety. She tries something, feels like she fails, but keeps getting up and won’t give up until she gets through it. Chapter 2 drove this home for me. The layout of the level was totally different, and most of the hazards were gone, after she woke up.

Also note that the difficulty is supposed to above the C sides. So, uh, time to git gud.

Above the C sides? Oh, man. I gave up midway through the B sides. So I think I'll be passing on this.