To be fair, I was definitely one to argue that her definition of ironic was completely wrong from the moment it debuted.

Same. I think it was pretty widespread. We also sang, "Isn't it Moronic", in our 90's jaded way.

This one goes out to Ben Wyatt

The Laurentian States of America

ahh, re: "Kiss Them for Me": another 90s nostalgia trip--80s bands getting more airtime with their 'new' music and reaching a new audience. I think I first remember seeing that on the Buzz Block, like when MTV was starting to play alternative videos in prime time?

ahh, re: "Kiss Them for Me": another 90s nostalgia trip--80s bands getting more airtime with their 'new' music and reaching a new audience. I think I first remember seeing that on the Buzz Block, like when MTV was starting to play alternative videos in prime time?

Yep. Kiss Them for Me was my first exposure to Siouxsie and the Banshees. I went on to get every album in their catalog.

Everlong was 97? Wow. Just heard it on the radio this morning. Somehow I thought 2000ish.

Anyone remember when Milla Jovovich (yes the actress from The Fifth Element) released a solo record? I really enjoyed the whole album and it is still on my ipod to this day.

Hard to believe it's almost 5 years since I heard the news that Chrissy Amphlett of the Divinyls had passed away. I remember liking this song in 1990 and my mother's disbelief that it was actually being played on the radio.

And for some reason I always associated this Sophie B. Hawkins song with the above song. I guess the outright declaration of desire that comes from both of them is what links them for me.

An add just came up on my Facebook for a purple translucent vinyl 25th anniversary pressing of Juliana Hatfield's Hey Babe. It looked pretty amazing and if I actually collected vinyl, I might have bought it. Instead its got me re-listening to this great solo debut album.

Also, got me listening to The Lemonheads - It's a Shame About Ray, which features Juliana adding some backing vocals throughout the whole album, and features a song with one of my favorite lyrics of all time: "She's the puzzle piece behind the couch that makes the sky complete."

The Laurentian States of America

Was on a search for some other music when I was reminded of this:

There are better audio-only versions on YouTube. Speaking of video/audio, this isn't the original video, but I *think* this is the original version of the song:

Rob Zombie! I guarantee you will not be able to get this out of your head for a week

I also loved the cover of "More Human than Human" in an episode of Altered Carbon.
https://www.youtube.com/watch?v=yPNF...

Okay, these guys were definitely 90s, and I definitely enjoyed them a lot at the time.

Also, was Nada Surf posted yet?

Get crazy with the Cheese Whiz and Drive-by body pierce:

To my mind rap rock began and ended with Urban Dance Squad. Although their best album is definitely was Mental Floss for the Globe from 1989 here is Good Grief! from 1994.

So so so ahead of their time.

Loved this band, crying shame they didn't get a wider audience. I saw them open for Pearl Jam in Athens and their album happened to randomly be playing in the bar where I met my wife.

I'm glad you posted this. That was one of the bands that took up the call and followed - even their name was a phrase uttered by Chuck D the year they were formed.

However, I haven't seen any of Public Enemy's 1990 album here. That needs to be remedied. This was punch two of the one-two punch PE began with It Takes a Nation of Millions to Hold Us Back. It was just before white America toked ourselves into grunge overdrive as we continued to wallow in our own garbage, and started to get a little sick of it. Grunge music wasn't the cause, of course. It was a mirror held up to our collective faces - often in a critical way.

It was a mirror held up to our collective soul

LouZiffer wrote:
It was a mirror held up by Collective Soul

FIXED for awesomeness and relevance!

side note: "Rebel without a Pause" is probably my favorite rap song!

To my mind rap rock began and ended with Urban Dance Squad. Although their best album is definitely was Mental Floss for the Globe from 1989 here is Good Grief! from 1994.

So so so ahead of their time.

Man this thread is bringing back some serious nostalgia ... UDS, Follow For Now, Public Enemy, Primus, Fishbone, 311, Bad Brains ... I could go on and on but then I went down the rabbit hole and found one of the local Atlanta bands I really dug at the time (Something). Ah the misadventures of a punk kid in Little Five Points ...

Another band that should have caught, but they never did. Great electro-industrial rock sound. They did get some mild recognition with Green Mind.

I was over the moon with their self-titled debut and when I heard they were coming to town opening for Oingo Boingo I just about lost my mind. Saw them at the 9:30 Club in DC and was such a front-row dancing spaz for both acts I got quickly plucked up and invited to the post-show after party hosted by Boingo & Dink. Got to meet Danny Elfman and everything, one of my all-time music heroes. Christ, I felt like one of those crying chicks in the vintage Beatlemania clips, lol.

Wish there were a higher-quality version of this song out there. Think it's my favorite of theirs.

I need to stop as I am drifting into other genres and I listened to just about everything during those times.

And on a totally different note:

This is what got me into Kurosawa films in high school.

Aw yeah. It does not get better than this possible NSFW King Missile song:

Jesus Jones will always be remembered by Right Here Right Now, but I think their followup album Perverse was even better, showing an edgier and more socially conscious awareness.

The Right Decision is likely my favorite track, but the album covers the spread from the meditative Yellow Brown to the pop-industrial(?) Spiral.

Jesus Jones's "Doubt" is a great album!
I think "Zeroes and Ones" is my favorite from Perverse.

But since someone posted Jesus Jones, I'll one up you with the criminally under-appreciated:

This whole album is fantastic cover to cover! Should have been way more than a one hit wonder and that one hit is far from the best song on the album. On par with Green Day's "Dookie" but with none of the success. 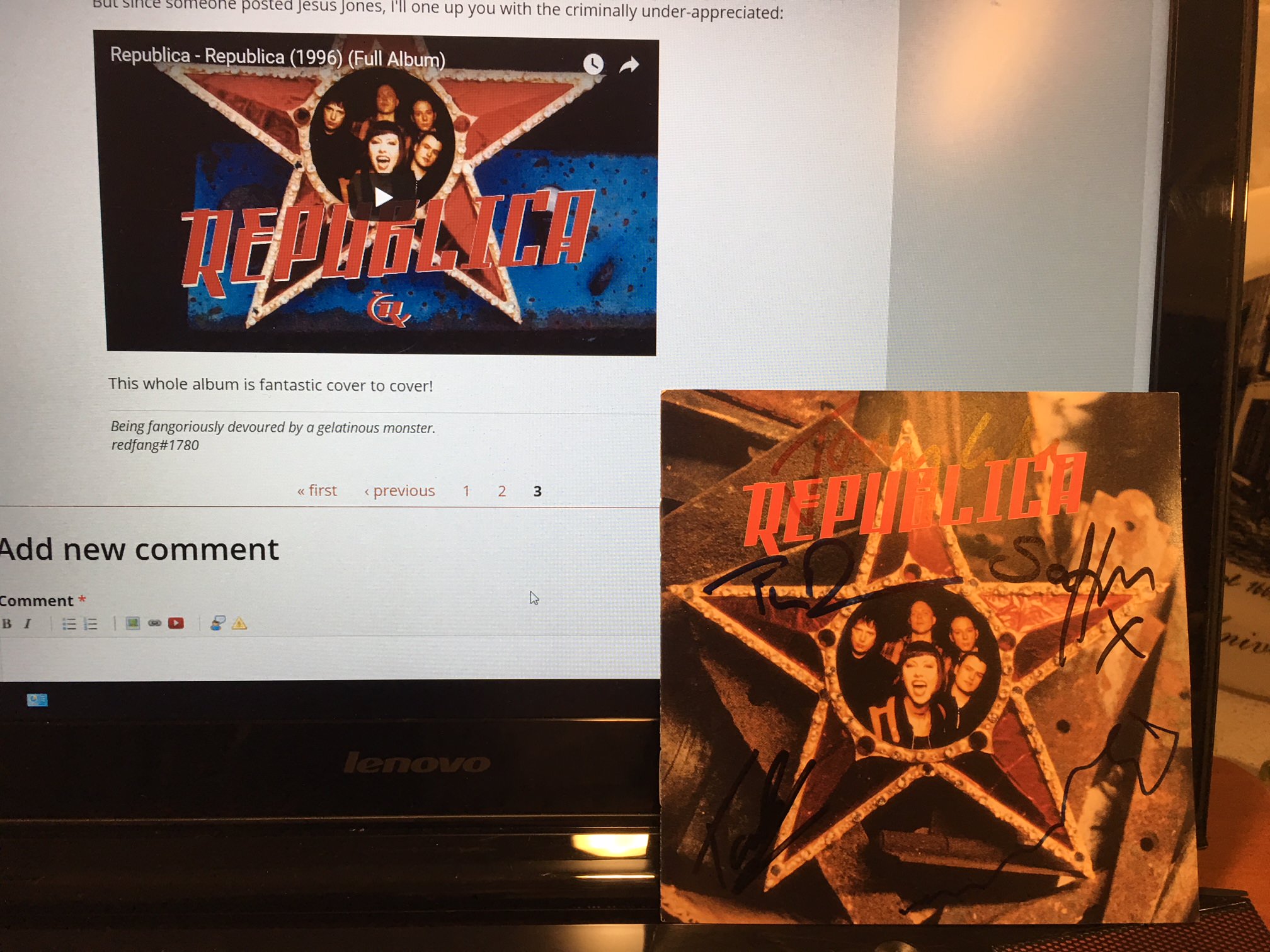 Nice! I like them too but I put the wrong link. I love Elastica!

Elastica were a perfect blend of mod new-wave/punk.

Next up, Everything But The Girl.

Again we have a band with an iconic song, Missing (1994). And once again their followup album Walking Wounded (1996) is really where it's at. This is the tail end of their career were the duo who was an actual romantic couple reached their zenith. Sadly, it was also their breakup album as they split up in real life shortly thereafter. The entire album is dripping with sadness, confusion, longing & remorse.

Oddly, it was also at the height of electronic Drum & Bass popularity, and the album still rode that line of lyricism and dance floor masterfully.

Now maybe I have some personal skin in the game as it was the same moment I was going through a divorce myself, making it feel desperately personal. The bottom had completely dropped out from underneath me, provoking an early-onset midlife crisis at the tender age of 25 (lol*). But the album has nonetheless left a lifelong impact on me with its profoundly relatable tracks.

This entire album is a Desert Island classic in my world.

* Doing that deal early made me completely laugh later in life at the concept of 30's, 40's and (imminently soon) 50's meltdowns. So I guess there's something to be said for walking though the coals early in life.

Jesus Jones's "Doubt" is a great album!
I think "Zeroes and Ones" is my favorite from Perverse.

I understand that they processed all their electric guitars through PCs to give an electronic flair.

Pretty damn Nostradamus too as the album launched just in front of the Internet revolution.

Devil You Know is another classic from that album.

Love how the paint (blood) dropping in his hands changes from red to blue, speaking of the ambiguity of morality.

In case anyone needed proof I lived through the 90s 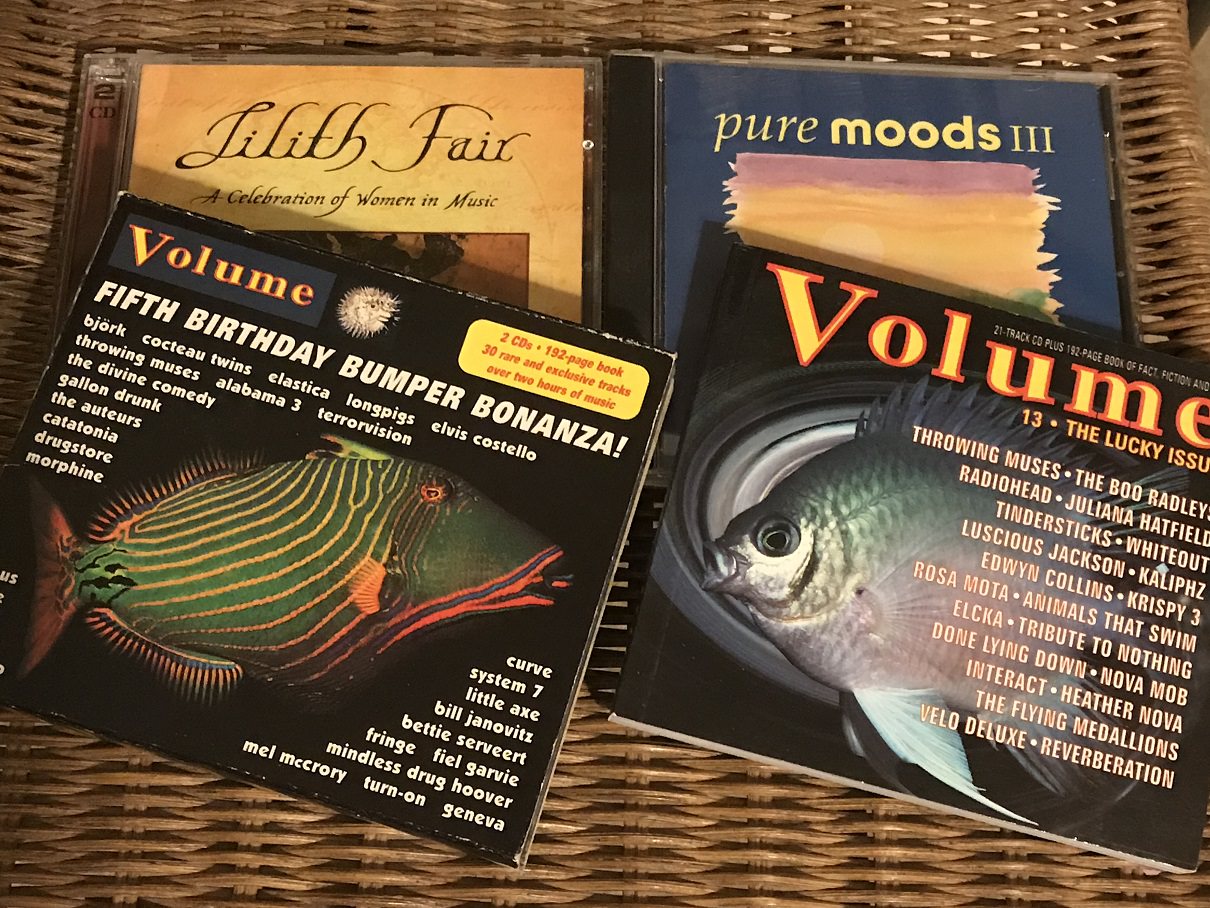