There are lots of superlatives in sports. Game after game is “THE GREATEST GAME EVER” and player after player is “THE GREATEST PLAYER EVER” and nothing is more tired than the constant overexaggeration of this significance of individual sports moments before we’ve all had time to sit down, relax, and get a chance to really consider how those moments fit into the historical record of sports.

That is the single greatest final play in the history of the NFL. Sure, it’s just the divisional round, and the Super Bowl itself has a whole host of great endings between Santonio Holmes and Malcom Butler and multiple Vinatieris and so many others. This doesn’t have those stakes, but . . . 61 yards? On a final playl? In a game that had featured two prior lead changes in the last two minutes, incredible catches, a 4th down conversion, and, most of all, was in the home of a team that is known for one thing more than anything else; blowing playoff games. Sure, it’s probably recency bias and some local fandom, but that was beyond unbelievable. That was the greatest play ever. Until the next one.

Now . . . let’s talk about Nick Foles. Nick Foles had a magic year in 2013; he completed 64% of his passes, had 27 TD and only two INTs, and led the league in TD%, yards/attempt, yards/completion, and QB rating. That year, he was simply amazing. The rest of his career?

Foles is, in a six-year career, essentially the definition of backup QB; he can come in and spot start with some vague competence, but you can’t expect much. Why? Because, outside of that year, he hasn’t delivered much. In the five years outside of 2013, he’s been marginal at best. And, last I checked, it’s not 2013 right now. Here, for the heck of it, are the stats for three players for comparison purposes.

Player 1 is phenomenal; it’s Nick Foles in 2013. Player 2 is Nick Foles the other five years of his career. Player 3? Player 3 is the ultimate veteran journeyman quarterback; Josh McCown. When you pull out the magic year of 2013, Foles edges McCown in TD%, but has a worse completion and INT%, and a lower YPA. Sure, we could pull out McCown’s half-season of actual competence in Chicago some years back and that might shift the numbers a bit, but, really, it wouldn’t make much of a difference. Career-wise, Nick Foles has been pretty much the definition of . . . “meh”. Nick Foles in 2013 is Mark Rypien in 1991 or Scott Mitchell in 1995 or HEAVY SIGH INCOMING Josh Freeman in 2010; the one year everything hit right before the player imploded into at-best mediocrity.

There’s also a reasonable chance that 2017 is Case Keenum’s version of that. In the end, though, Keenum’s penchant for less-than-perfect throws isn’t as big of a deal, as the Vikings receiving duo of Stefan Diggs and Adam Thielen keep bailing him out with incredible catches. Keenum fits this team well, but you mess up the offensive line or get rid of Diggs or Thielen, and he probably falls apart without all the perfect pieces. Those pieces exist, so, barring some injuries, he’s likely a much better QB this coming weekend than Nick Foles.

Wait, is Doctor Who an Eagles fan? Can he go back in time and un-destroy Carson Wentz’s knee? If so, Eagles. If they’re stuck with Nick Foles? Vikings.

At some point, you have to pay the cost for Blake Bortles, right?

I mean, not in a new contract (which would be HI-LA-RI-OUS, by the way). It just seems like at some point, you have to pay the proverbial piper for trying to win with somebody as awful as Blake Bortles. Blake Bortles has improved greatly this year to be profoundly mediocre; his DVOA was 0.3%, ranking 16th. He had 405 DYAR, ranking 15th. The three prior years (2016, 2015, 2014) he ranked 24th, 25th, and 43rd in DVOA and 23rd, 25th, and 44th in DYAR. Blake Bortles has been consistently awful, famously waiting until his fourth year as starter to actually have more wins as a QB than pick-sixes thrown.

Has he been better? Sure. He’s been helped by a phenomenal defense and a solid running game, which he needs, because he still hasn’t been good. The Jaguars have won two games this year where he passed for less than 100 yards, which is almost inconceivable. Yet, they keep winning.

The thing is, the standard book on Bill Belichick is (NO NOT CHEATING SHUT UP GURU) figure out one thing your team is good at, and take it away. It’s pretty logical to assume that thing in this case is the running game, so the Patriots will be betting Bortles can’t beat them. Jacksonville is lucky that the current forecast is a high of 43 on Sunday so at least it’s not too terribly cold, but asking a team like Jacksonville and particularly a player like Blake Bortles to come into New England and win is a tough idea.

So, anyways, I’m picking the Minnesota Vikings to meet the New England Patriots in the Super Bowl.

I got Minnesota and Jacksonville so I can be right about one thing in the Bold Predictions thread.

When Mike Mitchell got blown up by TJ Yeldon:

Nobody thinks the Eagles have a shot to win in this game so Dougie P will probably figure out some way to get Foles to throw 4 TD’s on Sunday.

Jacksonville has to win because the alternative is unthinkable. At some point somebody has to make the bad man stop and there isn’t a Manning in sight.

Viking and Patriots to meet in the Super Bowl.

Where the Viking faithful will get their hearts torn from their chests.

Then stomped on by Tom Brady’s cleated foot.

Viking and Patriots to meet in the Super Bowl.

Where the Viking faithful will get their hearts torn from their chests.

Then stomped on by Tom Brady’s cleated foot.

I've been predicting this since the start of the playoffs, with the exception that you also need to have the Vikings leading, and have the Patriots score a last-minute touchdown to win. No team has consistently crushed the hopes of their fans like the Minnesota Vikings.

Can there then be a moment where Keenum sprains his ankle or something and Teddy B comes in to save the day during the Super Bowl?

I think that the Eagles qualify for that, too!

I mean I gotta root for the Eagles. Otherwise I'd be an awful, awful fan of the team. The last game actually gave me faith that Foles ain't awful after all, and watching the Vikings defense at the end of the last game has me less worried. What really gives me hope, though, is that the Eagles defense has been rock solid. I mean, people keep talking about how Cowboys shut Eagles out, but no one seems to acknowledge that the Cowboys starting line only managed six points against the third string defense. Even our back-up defense can do a decent job.

So still hoping to see Eagles at the Super Bowl. Which means I'm gonna hope for Jags, and I imagine you guys might laugh because Bortles, but I feel like it would be a lot easier to take a lost Super Bowl to the Jags than the Patriots.

That is so true. I would take a loss to the Jaguars in the Super Bowl and smile. But the evil empire? That might send me to the dark web.

My wife is a Minnesota native who actually may be more into football than me. She loves her Vikes.

Gonna be an interesting playoffs under my roof.

I will say this, if the Pats have to lose in The Big Game, I'd be more than happy to see them fall to MN.

The thing with Foles is that they're calling the right plays for him, unlike what Jeff Fisher tried. How long read options will work for the Eagles is the million dollar question and I expect the Vikings and Zimmer to be up to the task. Vikings.

The Jags and Patriots are an interesting matchup. The Patriots will clearly try and stop the run to force the Jags into 3rd and long and Bortles. Gronk will likely be the key over the middle since the Jags secondary will be able to run M2M with the Patriots' WRs. The Steelers converted a hell of a lot of 4th downs to put up so many points and I don't trust Brady's arm enough plus they don't have Antonio Brown. So, it's all on Gronk imho. I think the Jags D is up to it as they'll get pressure on Brady, unlike the Titans. Jaguars.

MLB Joe Schobert named to first Pro Bowl in his second season after moving from OLB to ILB.

Good news, for once! 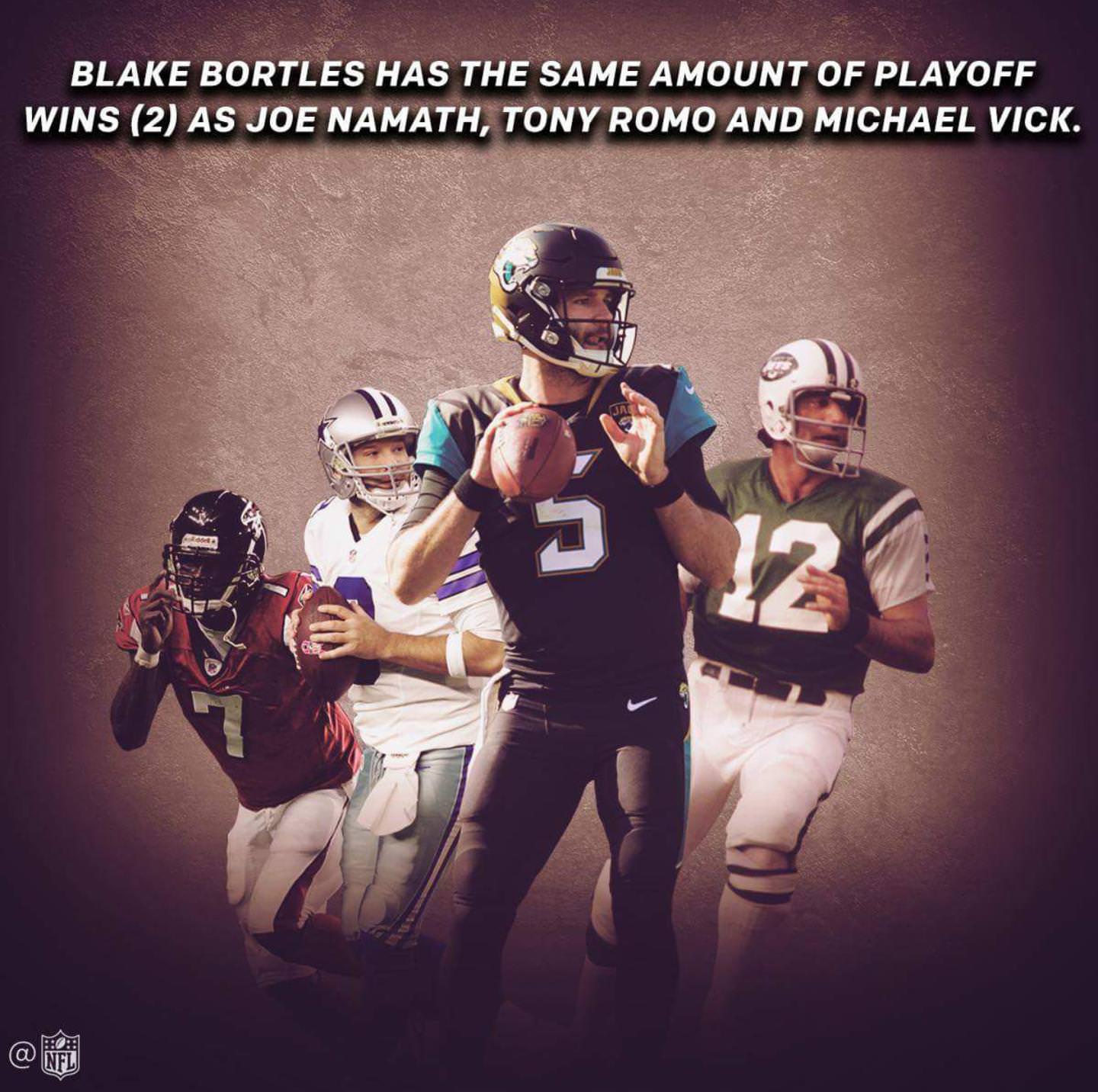 How many more days do we have to put up with this?

Someone Bortled the word choice there.

Someone Bortled the word choice there.

Jimmy G will get jealous. This won't end well.

Jimmy G will get jealous. This won't end well.

Well Jimmy's taking over the NFL starting this September. That's why from now until then is going to be a celebration of the Jaguars. 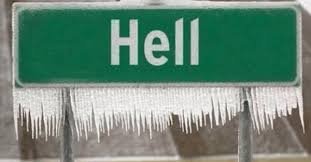 Tom Brady had to miss his press conference today, as he was meeting with the team's medical staff due to a throwing hand injury...

They promoted Randy Fichtner from within. He was their QB coach.

They promoted Randy Fichtner from within. He was their QB coach.

Good. I wouldn't want to waste a Bevell or Mularkey hiring on Pittsburgh.

I think the most painful thing about the Jags losing to the Pats on Sunday is that its a good matchup so we're talking ourselves into it.

Come on. I don't know the script but we're going to get a dash of the refs helping out, a sprinkle of injuries to key jag guys and a whole whopping pile of wtf are the coaches thinking.

I feel like the universe of Pats haters is talking itself into, "Hay, JAX could do it. Right? Guys?"

Like before a big boxing/MMA match how we get sold how the underdog can actually pull it off.