Thanks for the perspective, TrashiDawa, and congrats, Balthezor! How did you find Sun Jian? I want to try his campaign once CA fleshes out the south with DLC - I find him the most impressive of the historical coalition lords (and he and his family have really cool portraits).

I love this game so much. Reviews have pointed out the 'big picture' stuff it gets right, such as the character-driven system; and it also does a lot to improve the basic Total War mechanics:
- Siege battles are finally as dynamic and interesting as field battles: the maps are large enough to give room for both sides to manoeuvre (I won a defensive battle by moving cavalry through side alleys to mop up enemy archers and charge enemy infantry from behind), and the attacker can use flaming arrows/trebs to reshape the battlefield;
- Moving away from recruitment buildings allows combined arms from turn 1, as opposed to entire unit classes like cavalry being gated off for ages;
- Each commandery is unique and there are strategic reasons to take one instead of another (thanks to the minor settlements system inherited from Thrones of Britannia);
- No more agent spam!

The Three Kingdoms have just formed in my game: myself, Wu (capital off-screen - all the way in the south), and surprisingly, Yan - I think this is Gongsun Zan's old faction. Despite being significantly more powerful than Yan, Liu Bei didn't declare himself king (I had expected Shu-Han to be the third kingdom).

Map below. Despite Wu's huge realm, I'm not actually that worried about them; the Wu armies are thinly stretched trying to cover all that land. The north is a bigger problem - Wu's vassal swarm means there are a lot of armies in a small area. After a disastrous northern expedition cost the life of Cao Pi (Cao Cao's son and IRL successor), I'm playing defensively for now until I can muster enough armies to set foot north again... 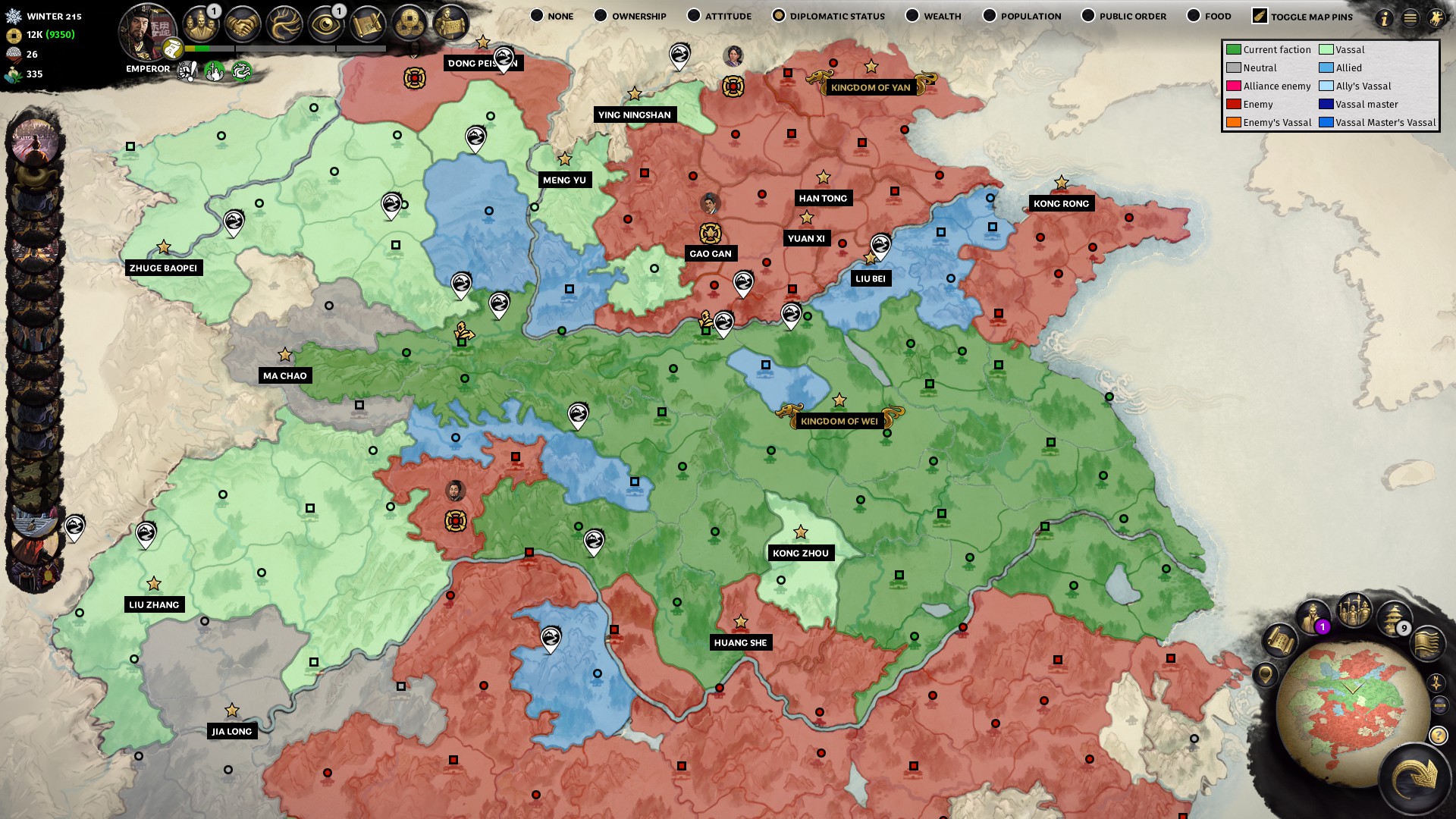 I thought Sun Jian was one of the starting factions you could play? Not sure, since once I beat a campaign with Cao Cao, everyone was unlocked.

I thought Sun Jian was one of the starting factions you could play? Not sure, since once I beat a campaign with Cao Cao, everyone was unlocked.

Yeah, he's one of the starting factions. I was thinking how enjoyable / interesting is his campaign, how distinct did it feel from your Cao Cao campaign, etc.

Started a yellow turban run. Going well so far been able to expand my borders and keep the peace with most my neighbors. Enjoying it so far. Hoping to got the top right corner to myself before things get nasty.

Just had the game get stuck on a dialog that I couldn't exit.

I hope that I didn't lose too much progress. I don't have it in me to go back in and fire the game back up to see what I lost. I'm going to turn on per-turn-saves when I go back in.

Just had the game get stuck on a dialog that I couldn't exit.

I hope that I didn't lose too much progress. I don't have it in me to go back in and fire the game back up to see what I lost. I'm going to turn on per-turn-saves when I go back in.

I think it auto saves every turn by default. Did wish it kept the last three saves or something sometimes.

Yellow turban campaign has been a breeze so far. Better positioning of my empire and good diplomacy made me very strong. Lu Bei was much harder for me.

Coming up on two decades here, but this sounds really tempting.

It's the best Total War not named Warhammer. Best diplomacy, leader dynamics and personality, it's visually stunning, and man it runs sooooo well. Turns only take about 30 seconds for the AI to complete.

The Warhammer TWs are different in a lot of ways, so it's hard to compare them directly with Three Kingdoms. But when you compare Three Kingdoms to the other historical ones, I haven't had this much fun with one since Rome. I think it's even better than Shogun 2.

I agree with Budo. This plus Total Warhammer 2 is the tops.

I prefer this over war-hammer 2 just for turn speed alone. With mortal empires on it takes forever. This is probable the best one since shogun 2 in my opinion.

I purchased this during the Winter Sale and just wanted to step in and sing the praises of this game. Few games can check the trifecta of 1) Game Design, 2) Art Direction, and 3) Technical Design and this game takes the cake in all three categories. Special mention to the art direction which is both beautiful and brilliant. This is the first Total War game I have played since Shogun 2 (which is a great game in its own right) and is a huge step forward in terms of the design and various game systems they have implemented. This game is deep and engrossing and the way they make the presentation of all the information so accessible results in the best UI I have ever seen in a game. Huge props to CA for what they achieved with this game.

It is a complete revival of the series, a game of design genius. The systems, the presentation of information, the backstories, the to and fro of kingdoms reacting to the fall of the big dog in the neighborhood, it’s all integrated together into a gorgeous living painting. It’s hard to believe it’s CA.

So, a legendary commander shows up at my court. He's a vanguard, which I need, and he's willing to spy for me, and his last loyalty was to Cao Cao. So, I'm good, right?

Think you can buy him off?

Hey I hired Lu Bu and made him my heir. He wound up being perfectly loyal for my whole game. Miracles happen.

I've only finished one playthrough - Liu Bei. It's probably one of the easiest campaigns because very few heroes can match the dueling strength of Guan Yu (he'll have trouble besting Xiahou Dun so avoid clashing with Cao Cao), and Zhang Fei is pretty good at devastating the opposition (well, not as good as Lu Bu, but still formidable as hell).

I unintentionally had Sun Ren marry Liu Bei, which was something that reportedly happened in historical accounts (in which the Lady Ren parted ways with Liu Bei). Liu Bei had died of natural causes by the time Sun Ren, then my faction leader, became Empress.

I didn't get Lu Bu to join me, but the Zhao Yun event (thought to be random) triggered early in my game. He was pretty good as a Sentinel. Zhao Yun I believe is a starting legendary hero for one of the north-eastern warlords, whose name I can't recall.

Oddly enough, I also had BOTH Sima Yi and Zhuge Liang in my game. This is depsite both being adversaries in historical accounts. Their Cunning stat is absurdly high meaning their ranged armies can sit there shooting all day long.

Apparently if you play Dong Zhuo you should give Diaochan to Lu Bu or else he will become very discontent. I had a very upset Lu Bu when I decided to follow the historical astory. I believe in a recent update Diaochan is upgraded to a legendary hero as well, giving her unique portait and unit model. Probably worth checking into at some point.