Certis was PMed before I posted this and OKed it! Please don't delete! I'd also like to note that I'll be around to answer any questions you might have! thanks!

Come and try out a free version of Ultima Online known as Legacy UO. Experience Ultima Online the way it was meant to be! We launch in less than 1 weeks!!

Ultima Online is a third-person perspective/isometric Retro MMORPG set in Richard Garriottï's Ultima universe. It is a persistent world, which means that hundreds, if not thousands of people can play and interact simultaneously. When you log off the world keeps going and your actions such as gaining skills or items are saved to the server.

Although UO cannot compete with the graphics of modern games, it more than makes up for this with complex and diverse gameplay. UO doesn't just offer a world to play in; it offers a persistent world to live in. Your character is highly customisable, from their statistics and skills to their clothing and appearance. You can build your own house and place it at any available land spot in the world, decorate it as you see fit and even partake in a complex city building system, called Townships, where are a group you can create your own cities to control as you wish. Legacy even has a Pet Breeding system under development where you can breed specific traits to have the dragon companion you have always wanted!

Ultima Online, in a nutshell, is the game that all other MMORPGs have been trying to copy for the last last 20 years, but just can't get it right.

Decorate your own home 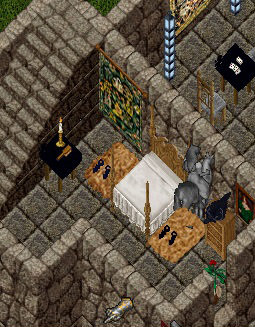 With a diverse range of skills, you can literally play whichever character you wish to; whether it be an axe-wielding maniac who chops wood for a little Zen meditation, a scholarly mage who weaves the ether to do thine bidding, a humble crafter who can make anything and everything to sell at your private shop, an Animal Tamer who can command great beasts such as dragons and basilisks to protect you at all costs, a swift-fingered thief who helps lighten the purses of those around you or an assassin who slips into the shadows unseen and attacks when your mark is at his weakest! UO allows you to choose whichever skills you wish so your character can be unique, and you can change and retrain your skills at any time.

Legacy is a free Ultima Online shard (server) that will be launching on November 25th of this year! It has been built by a crack team of professional software developers with years of coding experience. The shard uses UO server emulation software known as RunUO and has had the code heavily modified so that it is vastly different from the pay-to-play version of the game. In fact, the source code for Legacy has 13 YEARS worth of development behind it, carefully perfecting every aspect of it.

In Legacy you can be attacked, robbed, looted, etc. by your fellow players, just like in the early days of Ultima Online. Meaning that you have to be wary outside of town guard zones as danger can often lurk just around the corner; whether it be from a roleplaying orc wanting "tribuut", a pirate seeking plunder or a run-of-the-mill "peekay" wanting to "pwn" you! This sense of danger is sorely lacking in other MMORPGs on today's market where everything is instanced or scripted to protect a player from excitement and danger. Such protection unfortunately removes the fun aspect of interacting with other players where you never know what will happen next. One of the only things that can beat the rush of managing to escape being killed by another player for the first time, is finding them at a later date and returning the favour by besting them in combat! But also keep in mind, that it's not QUITE as dangerous as the very original UO was. We've worked hard to find create a nice "goldilocks" amount of risk.

Killing your fellow citizens is not without consequences however, and the adage "if you commit the crime you do the time" certainly rings true on LUO, where murders have the option to be sent to prison rather than stat loss if they are killed with 5 or more short term murder counts. Prisoners can then team up and attempt to break out of the prison rather than wait out their sentence, but be warned it is no easy feat!

3. Why Should I play Legacy?

Well, if you have never played UO before, then you should play Legacy because you've never experienced anything quite like it. It's a world where you are rewarded for the risks you take, and how you play. It's managed by a group of people who simply do this out of love for the game. We are not here to make a buck, we're here to make a quality game for thousands to enjoy. There are no loot boxes, there are no micro transactions, there's nobody trying to suck the life out of you through a video game there's just high quality game play carefully created by people who have enjoyed Ultima Online for many years!

Legacy UO has a dedicated, professional team of developers who are constantly working on new content to provide the best gaming experience out there that caters to all playstyles; whether it be player vs player (PvP), player vs monster (PvM) or roleplaying (RP). The shard has a balanced PvP and PvM ruleset that continually strives to maintain that balance while still releasing new content.

Also, skill gain is faster on Legacy than it is on production servers and other games, so you can train up a character fairly quickly and get straight into the action, and not deal with yet another tedious grind.

Frankly, there's just too many reasons for you to come check us out for us to be able to fit them all in this announcement!

Legacy UO has regularly scheduled events such as town invasions, player run events as well as a number of features that make it unique. The quickest way to read about these is to check out the LUO playguide. .

Some of these features include:

Game launches are always an exciting time, so to celebrate we'll be passing out gifts to everyone who is logged in on launch day! 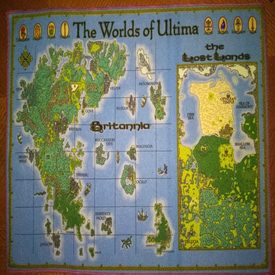 Aside from the give away extravaganza, some in game events can be expected by staff.

Keep in touch so you don't miss the launch!

This looks interesting - I remember trying out UO originally when it started on a dial up modem, and that didn't go well.

Anyways - I have to ask a question - Are you guys part of the UO team? Because the game is still running, so I assume this is some sort of spinoff, like Wow Classic ?

I'd also like to note that I'll be around to answer any questions you might have! thanks!

What version of UO are you pulling from? 2nd Age, Renaissance? I loved this game growing up and would definitely be interested.

Grew up playing this MMO and my brother still talk about it. Definitely would be interested in this!

So, since the OP isn't around anymore, and this seemed like a driveby posting, I'd like to say to those interested that those who hold the rights to the game, and are currently running it, are releasing a new version of the game next year.

Basically, its a F2P version of the game.

When I read about this a few months ago I was turned off by the lack of bank space for free players, but it looks like you can rent vault space using in game gold. This is intriguing.