This year is the deadliest year ever in terms of mass shootings. In a political climate of polarization, it becomes harder to suss out legitimate information from the misinformation propagated by those with political agendas. Complicating this more is the continual resistance of 2nd amendment advocates to allow for political talk surrounding these massacres. This will involve political discussion to see if there are ways we can all agree might be good ways to prevent mass shootings.

This discussion should involve the details of any current, or future mass shooting, and how they compare to past mass shootings. How are they the same? How are they different? Do gun laws have an impact? Does the race of the shooter affect how we treat them? What makes one a hate crime and one an act or terrorism? Are these shootings the price of freedom?

Considering that any substantial law has exactly zero chance to pass, I'll take a law that does something, no matter how little.

Won't someone think of the troops? National security is at stake!

Things are going swimmingly in Uvalde.

This morning family members of victims and members of the media were ejected from a public meeting between the Uvalde PD and Texas legislators. The reason given by the fire marshal kicking people out was that the victims and media were "intimidating" the government officials.

Yesterday it came out that Uvalde police never even attempted to open the door to the classroom the gunman was in during the standoff and that the door was likely unlocked the entire time.

And the city has hired a law firm who's main task is to contest and block the 150 Freedom of Information Act requests for public records about the shooting and the UPD's response. The law firm is arguing that the records shouldn't be handed over because they could contain "highly embarrassing information."

So, what's the chance that a good % of the bodycams will show the cops doing nothing or, even worse, shooting kids?

Unless they were playing a drinking game where every time there was gunfire they took a shot...and then they shot a kid while drunk.

Also, they had shields: 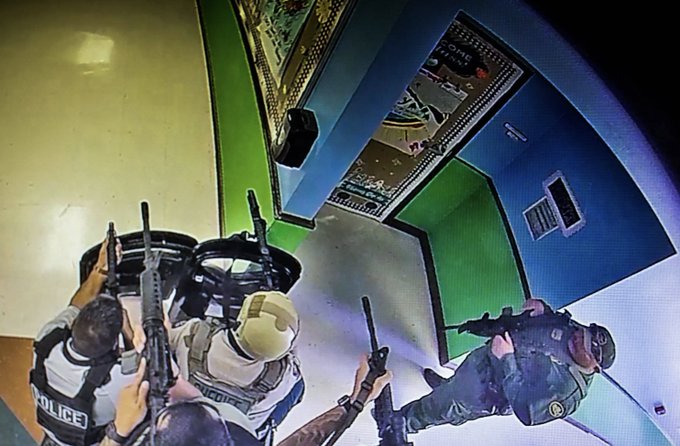 Also, they had shields:

Probably just the brown ones.

Texas Department of Public Safety Director Steve McCraw condemned the response of Uvalde police to the Robb Elementary School shooting, calling it an "abject failure and antithetical to everything we have learned over the past two decades since the Columbine massacre." Police officers with rifles stood and waited in a school hallway for nearly an hour while the gunman used an AR-15 to kill 19 children and two teachers on May 24.

"Three minutes after the subject entered the West building, there was sufficient number of armed officers wearing body armor to isolate, distract and neutralize the subject," McCraw said. "The only thing stopping the hallway of dedicated officers from entering 111 and 112 was the on scene commander who decided to place the lives of officers before the lives of children."

Before fielding questions as he testified at a special Texas Senate committee hearing Tuesday, McCraw also said that teachers, not law enforcement, should be praised for their actions to quickly implement active shooter protocols before the shooter entered the campus. McCraw said teachers worked faster than law enforcement, who were actually armed with enough firepower and protection to take down the gunman, to shut down the school.

"The post-Columbine doctrine is clear and compelling and unambiguous," McCraw said. "Stop the killing. Stop the dying. You can't do the latter unless you do the former."

Uvalde mayor says refusal to release body cam footage is not a 'coverup.'

McLaughlin said in a statement the Uvalde District Attorney requested the city not release any records related to her investigation of the shooting at Robb Elementary school that killed 19 kids and two teachers. This also includes requests for body cam footage from officers inside the building, which he said is restricted from release by the Texas Occupations Code.

"There is no coverup," McLaughlin said in the statement. "Anyone who suggests the city of Uvalde is withholding information without legitimate and legal reasons is wrong and is spreading misinformation. There are specific legal reasons the city cannot release information at this time."

The "specific legal reasons" are becoming more than likely the Uvalde PD shot some kids/teachers and all this is drip drip over the last month is an attempt to soften white outrage when the truth is disclosed. Because nothing scares the American institution of policing more than white people seeing the police the same way that People of Color see the police.

Officer husband of slain Uvalde teacher was detained, had gun taken away after trying to save wife

I gotta say, it is fairly amazing that literally every piece of news coming out after this shooting has just gotten worse and worse.

Rat Boy's on it though, the Uvalde PD are going to be the fall guys for so, so much.

Two weeks ago I'd have disagreed with you. Now, it's like "Yeah, that's all that's left."

Fifty-eight f*cking minutes. Police in other countries have responded faster to better-trained, better-armed groups of terrorists before.

The entire department should probably be razed and rebuilt after this.

All "local" departments should be razed. There's no good reason to have more than state and federal levels.

The entire department should probably be razed and rebuilt after this.

Law enforcement in America should probably be razed and rebuilt in general. The model we have for it is completely dysfunctional and this very outcome was entirely predictable. It is and has always been pure theater.

Law enforcement in America should probably be razed and rebuilt in general. The model we have for it is completely dysfunctional and this very outcome was entirely predictable. It is and has always been pure theater.

First division are the people who drive around, are mostly visible, give tickets to people, respond to accidents, direct people around construction sites, and so forth.

Second division are the people who respond to situations: alarms, shootings, domestic violence disputes, etc. They also do the investigative work for things like theft and break-ins. Their job requires more interaction and ability to communicate with the public than just "do you know why I pulled you over today".

Third group is dispatched only when specifically told to by command, either for incredibly serious situations or when one of the other two groups requests it. They do not go on patrol. All requests for SWAT are logged and must be justified after the fact by the people making the decision to call them in.

All groups have extensive training on how to deal with people and defuse dangerous situations. Group two generally works with a team of qualified mental health professionals that assist or accompany them. Only group three has weapons of any kind.

EverythingsTentative
Posted: June 22, 4:03 PM
I think I know, but I have no idea.

Traffic enforcement wouldn't need to carry a weapon or have arresting powers. If they need assistance they could call for it.

Traffic enforcement wouldn't need to carry a weapon or have arresting powers. If they need assistance they could call for it.

Except that "traffic enforcement" is a combination of "let's raise money to fund the local government in a way that isn't levying or raising taxes" and, for the police, "let's fish for outstanding warrants or contraband items by claiming I smell weed."

House Minority Leader Kevin McCarthy of California and House Minority Whip Steve Scalise of Louisiana announced during a closed-door conference meeting on Wednesday that they are both a "no" on the Senate's bipartisan gun deal, according to a source in the room.

House GOP conference Chairwoman Elise Stefanik of New York said in a statement she also plans to vote against the bill, meaning the top 3 members of House Republican leadership are all united in opposing the legislation.

House GOP leaders also plan to formally whip against the Senate's bipartisan gun bill, according to Republican sources. A formal whip notice is expected to go out on Wednesday.

The Republican Platform since before I was born.

The Republican Platform since before I was born.

Pretty sure that started around the FRD administration.

The Democratic Platform: just slightly less progress than needs to happen to stay in power.

Guns everywhere all the time. Insanity

Guns everywhere all the time. Insanity

SCOTUS just got extra protection because someone tried to exercise their 2nd amendment right too close to one of them. Sounds like they should be living with the consequences of their decisions.

Why do I have the feeling that if there was going to be any day where a story about Uvalde police shooting children was going to drop quietly it'd be today?